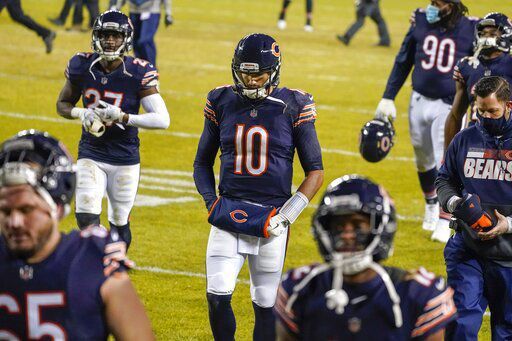 The Bears' Mitchell Trubisky and teammate walk off the field after losing to the Packers on Sunday in Chicago. Chicago still qualified for the playoffs. 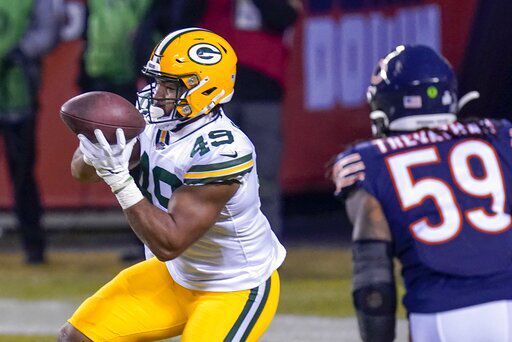 The Packers' Dominique Dafney catches a touchdown pass during the first half  against the Bears on Sunday in Chicago.

The Green Bay Packers clinched the No. 1 seed in the NFC. Then they cut loose.

“I didn't see any tears,” Rodgers said. “I'd probably be the one crying. I think anybody over 30 can appreciate ... the emotions, the perspective changes a little bit. Each moment is a little more special.”

Rodgers threw for four touchdowns, breaking his franchise record for scoring passes in a season, and Green Bay clinched the No. 1 seed in the NFC by beating the playoff-bound Chicago Bears 35-16 on Sunday.

The Bears are headed to the playoffs for the second time in coach Matt Nagy’s three years despite the loss because Arizona fell to the Los Angeles Rams. Chicago will be at New Orleans (12-4) at Sunday at 3:40 p.m.

“I don’t care how we got there," safety Eddie Jackson said. "We’re in. That’s the marvel of it.”

The Bears are the third team since the 1970 merger to reach the playoffs after losing six in a row. The Monsters of the Midway bounced back by winning three straight against struggling teams. But against Green Bay, the result was a familiar one.

Mitchell Trubisky went 33 for 42 with 252 yards and an interception.

Rookie Darnell Mooney set career highs with 11 catches and 93 yards before leaving early in the fourth period with an ankle injury. He was hurt when he was tackled going out of bounds after a catch.

David Montgomery ran for 69 yards and a touchdown and caught nine passes for 63 yards. Cairo Santos made all three field goals, extending his streak to a franchise-record 27. The Bears also lost linebacker Roquan Smith to an elbow injury.

But they'll play at least one more game.

The Packers (13-3) earned a bye while winning their sixth in a row and beat Chicago (8-8) for the 19th time in 22 games, counting the postseason.

“This is a special season," Rodgers said. “It will always be a special season for me. It's been a special year as well. ... It's such a difficult time for so many people. I have such an understanding and appreciation for how difficult it's been on so many people. I've really just tried to have a good perspective, an attitude of gratitude and really just enjoy every moment of this season.”

Rodgers joined Peyton Manning (2004 and 2013) as the only players to throw for at least 45 touchdowns in multiple seasons. He now has 48, surpassing his previous high of 45 in his first MVP season of 2011, and just five interceptions.

Rodgers completed 19-of-24 passes for 240 yards without getting picked off and had a 147.9 rating. He also improved to 21-5 against Chicago, counting the postseason.

“The MVP should be locked up," Davante Adams said. "There’s nothing else to really talk about. You look at what we’ve done and what he’s been able to do, and they’ve hit him with everything. Said he didn’t have any weapons, and we go out there and go 13-3 regular season.”

Adams is doing his part, too.

Marquez Valdes-Scantling became the first Packer since Jordy Nelson in 2014 with two touchdown catches of 70 or more yards in a season. He caught a 72-yarder in the second quarter, though he also dropped a potential 63-yard TD early in the third.

Aaron Jones ran for a score in the closing minutes. And the Packers beat Chicago again after pounding the Bears at Lambeau Field to start their win streak.

The Packers lost standout left tackle David Bakhtiari to a season-ending knee injury on Thursday. Even so, they scored on all three possessions in the first half. And they added two touchdowns in the fourth quarter to break open a five-point game.

The Packers were leading 21-16 when the Bears opted to go on fourth-and-1 at the 25 rather than kick a field goal. Trubisky’s pass to Allen Robinson got broken up. Green Bay then drove 76 yards, with Jones scoring from the 4 to make it 28-16 with 3:47 remaining.

Adrian Amos then intercepted Trubisky at midfield and returned it to the Chicago 26, leading to a 6-yard touchdown catch for Adams.

Bears: Smith was hurt defending a run late in the first quarter and headed to the locker room.

Packers: The Packers have their sights set on a deep playoff run after losing to San Francisco in the conference championship game last season. They are off next weekend.

LAKE FOREST, Ill. — The Bears are reeling. And now, they might have to get by without Justin Fields.

The Bears' Mitchell Trubisky and teammate walk off the field after losing to the Packers on Sunday in Chicago. Chicago still qualified for the playoffs.

The Packers' Dominique Dafney catches a touchdown pass during the first half  against the Bears on Sunday in Chicago.