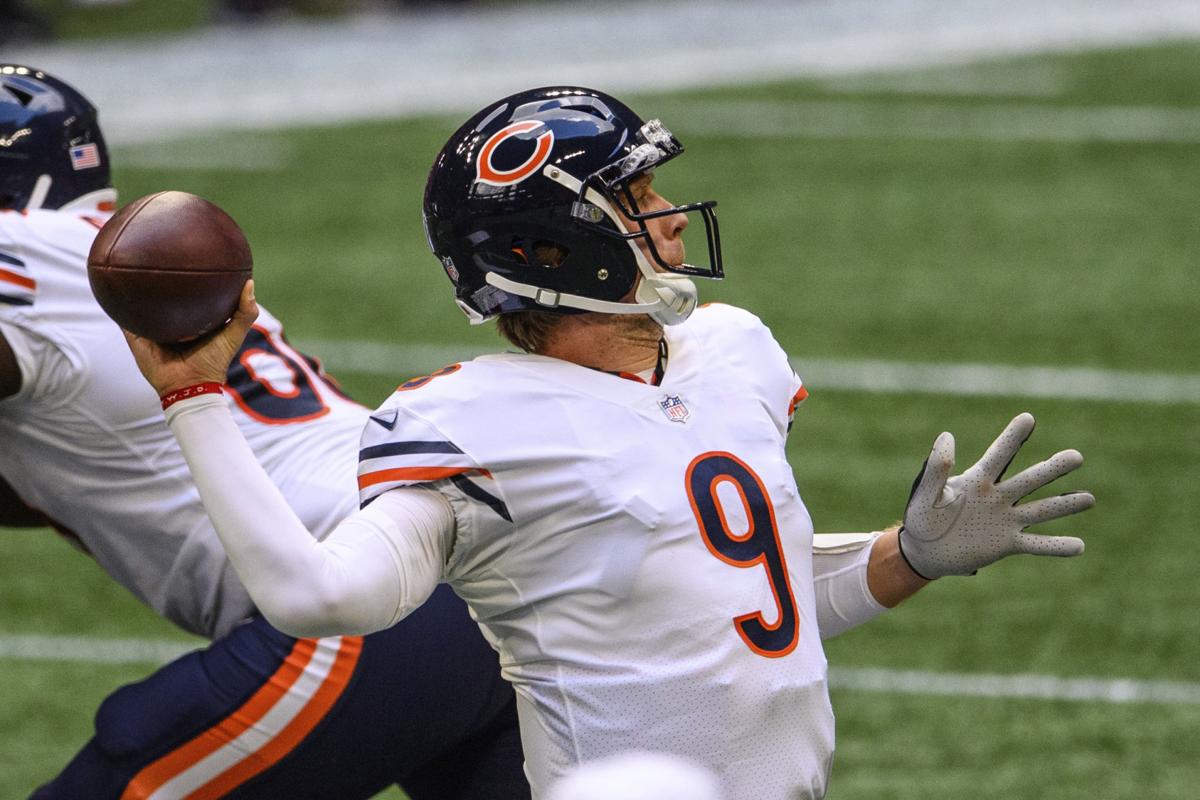 Bears quarterback Nick Foles throws during the second half Sunday against the Falcons in Atlanta.

Coach Matt Nagy sensed the calm in Nick Foles as the veteran quarterback led the Bears to another comeback victory last week.

It struck him right before the go-ahead touchdown pass to Anthony Miller at Atlanta. Foles made an adjustment in the huddle to account for a blitz, then dropped back out of the shotgun on third down and hit his target in stride on a post route.

“He just was kind of in his own zone, and I could just tell, like, not to mess with him,” Nagy said Wednesday. “Just let him go, he’s in a good place right now.”

Foles gets another chance to show he's more than just a good arm out of the bullpen when the Bears host the Indianapolis Colts on Sunday. The Super Bowl 52 MVP took over for Mitchell Trubisky in the third quarter last week and threw three touchdowns in the fourth as the Bears erased a 16-point deficit on the way to a 30-26 victory.

The Bears announced he is their No. 1 quarterback. And he'll make his first start since Week 13 last season with Jacksonville.

“I feel really comfortable," Foles said. "And I think that going in this week, there have been a lot of great conversations. Even last game, I felt more of myself when I stepped into that situation just playing and getting to just do things that I like to do in a chaotic situation.”

Foles has been everything from a starter to a castoff over nine seasons with five teams.

He moved into the top spot with Philadelphia in 2017 after Carson Wentz suffered a season-ending injury and wound up leading the Eagles to their first Super Bowl title. Foles was the MVP in the biggest game of all — a 41-33 victory over Tom Brady and the New England Patriots.

He returned to a backup role behind Wentz in 2018. He then signed a big contract with Jacksonville, only to lose his starting job to rookie Gardner Minshew in an injury-filled season. His wife also had a miscarriage in May 2019.

“You get an opportunity to instill confidence and calmness with your teammates and your coaches in a chaotic moment, and that’s just something throughout the years, going through trials, going through tough times, it’s just equipped,” he said.

"It’s never fun to go through those tough times, but it’s a big reason why stepping into those moments I just don’t worry about it too much. I just go out there and be fearless as much as I can be.”

The Bears acquired Foles for a fourth-round pick from the Jaguars in the offseason to compete with Trubisky, the No. 2 pick in the 2017 draft. Foles' knowledge of the system and history with Nagy and offensive coordinator Bill Lazor were also factors.

Nagy decided to make the switch last week after Trubisky got intercepted by Blidi Wreh-Wilson. But he was also annoyed by the Bears' struggles to score.

Now 31, Foles gets another chance to show he's more than just a good backup. He's looking forward to it.

There will be another familiar face in the stadium, too. Colts coach Frank Reich was Philadelphia's offensive coordinator during the Super Bowl season, and they remain tight.

“He was the one who really figured me out as a player and realized that we had it all wrong and they just threw some plays out there one day and said just go play these plays, we studied you and these are the plays you do,” Foles said. “And sure enough something triggered inside of me.”

Notes: Nagy said he's not sure if K Eddy Pineiro will be ready to come off injured reserve this week. He is eligible to return from a groin injury after missing three games under a new rule implemented because of the pandemic.

"I’m motivated in general, just playing with the Rams and trying to help us win. But yeah, going into this game, it’s a little more added energy for it, going against my old team.”

“I don’t ever remember having our own defense score more than our offense,” Nagy said. “That’s that’s that’s hard to do. So that part I don’t like, and it bothers me.”

“Obviously, stating the obvious, the offense, we've got to get this stuff figured out," Chicago coach Matt Nagy said. "It’s not good enough, and to be outscored by your defense, obviously, is unacceptable, too. So that part is frustrating.”

Bears quarterback Nick Foles throws during the second half Sunday against the Falcons in Atlanta.