Browns hold off Philip Rivers, Colts
Share this
{{featured_button_text}}
1 of 2 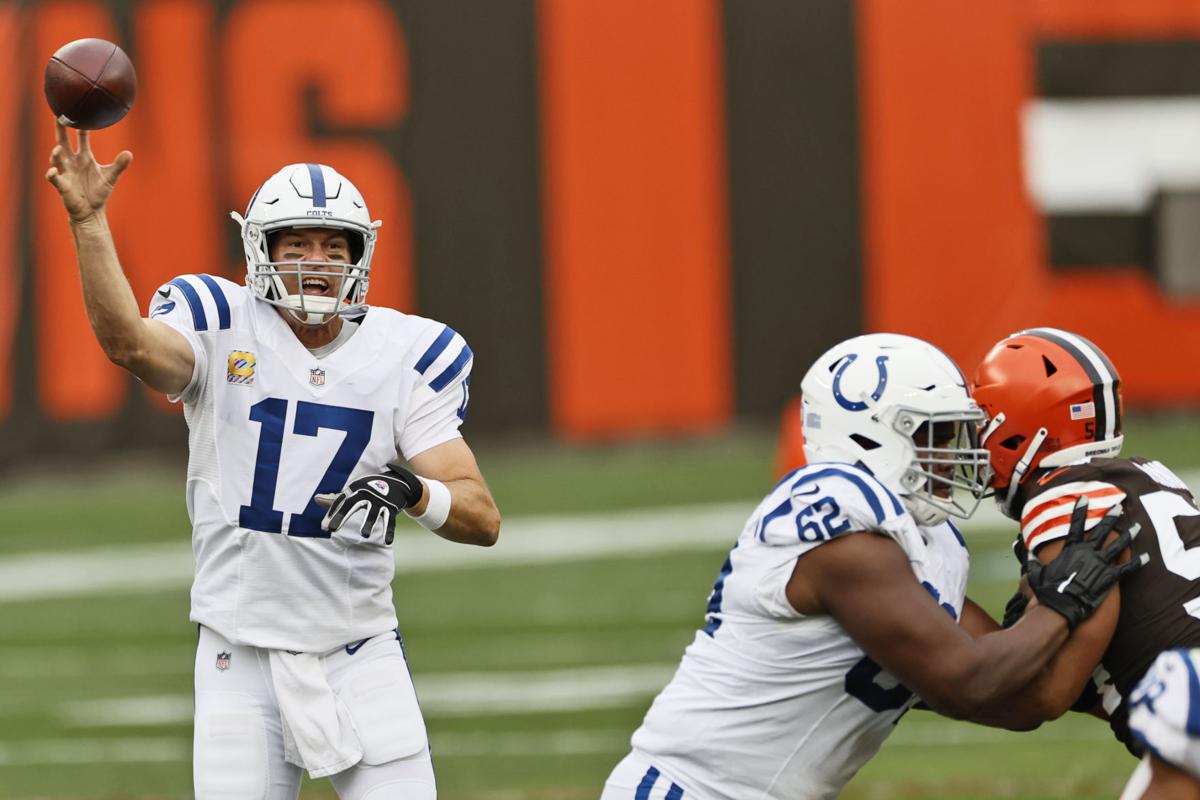 Colts quarterback Philip Rivers (17) throws during the first half Sunday against the Browns on Sunday in Cleveland. 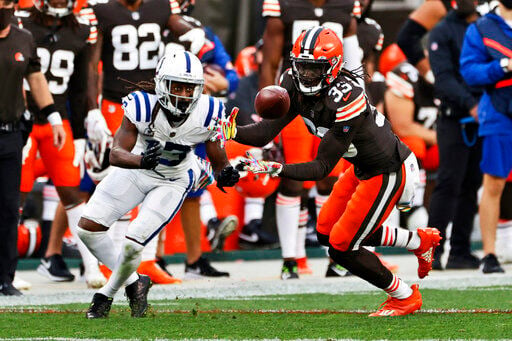 Browns defensive back Ronnie Harrison, right, intercepts the ball ahead of Colts wide receiver T.Y. Hilton, left, during the second half Sunday in Cleveland. Harrison returned the ball for a 47-yard touchdown on the play.

CLEVELAND — Bill Belichick was their coach and Nick Saban was on his staff the last time the Cleveland Browns were this good this early.

Baker Mayfield passed for a season-high 247 yards and two touchdowns against the NFL's No. 1 defense, Myles Garrett forced a crucial safety in the fourth quarter and the Browns held on for a 32-23 win over the Indianapolis Colts on Sunday.

“It's very special," said wide receiver Jarvis Landry, who crawled to the sideline after taking a hard hit in the the first quarter. “We continue to make strides each week. It's not surprising we're in this position.”

Mayfield made sure the Browns (4-1) kept the momentum going in their first game without Pro Bowl running back Nick Chubb, who sprained his knee at Dallas last week. The win could have been costly, though, as Mayfield injured his ribs in the fourth quarter.

Coach Kevin Stefanski said the quarterback is going for X-rays.

Cheered on by 12,000 fans inside FirstEnergy Stadium, Mayfield threw TD passes to Kareem Hunt and Rashard Higgins in the first half while rolling up 228 yards passing. The Colts' defense came in allowing the fewest passing yards, points and led the NFL in interceptions.

The Browns seemed to be in total control when safety Ronnie Harrison picked off Philip Rivers and returned it 47 yards for a TD in the third quarter to give Cleveland a 27-10 lead.

But Colts returner Isaiah Rodgers brought back the ensuing kickoff 101 yards for a TD — the longest play in the league this season. Then the Browns turned to their defense and a huge run by backup running back D'Ernest Johnson to finish the job.

With Cleveland clinging to a 27-20 lead, Garrett, who got his sixth sack earlier, pressured Rivers into an intentional grounding call from the end zone for a safety.

“We need him to be a great player, and he answered the bell,” Stefanski said.

On the Colts' next possession, Browns safety Sheldrick Redwine, who came in while Harrison was being evaluated for a concussion, picked off Rivers.

It was a rough performance for the 38-year-old Rivers, who completed 21 of 33 passes for 243 yards and the two picks.

“The interception for a touchdown killed us,” Rivers said. "The other one I’d like back, too. Then obviously, the safety hurt as well. The offense gave them nine points. The defense bowed up in the second half and played well enough to win. Offensively, we felt like we didn’t do enough to win.”

Mayfield's 15-yard TD pass to a wide-open Higgins gave the Browns a 17-10 lead in the second quarter. It was the first scoring connection between the pair this season. Higgins, who had been a favorite target of Mayfield's in 2018, didn't play much last season, had been a healthy scratch for two games in 2020, and dropped on the depth chart.

But after his score, Higgins broke out his red-carpet walk celebration as his teammates pretended to take his photograph.

Mayfield showed patience on his 2-yard scoring pass to Hunt, which gave the Browns a 10-7 lead early in the second quarter.

Rivers did make some history. He started his 229th consecutive game, tying him with Hall of Fame lineman Bruce Matthews for the second longest in league history. Brett Favre started 297 games in a row.

Colts: DT Denico Autry left in the first half with an ankle injury. ... Safety Julian Blackmon left with a groin injury.

Browns: Starting RG Wyatt Teller left with a calf injury in the first quarter and didn't return. Chris Hubbard took his spot. ... Rookie LB Jacob Phillips injured his knee in the second half. ... DE Olivier Vernon left with a groin injury in the fourth period.

Colts: host Cincinnati on Oct. 18 before their bye week.

"Look, Philip needs to make a decision about if he for sure wants to play. Do I think Philip Rivers is a winning quarterback that we can win and go to the Super Bowl with? Absolutely I do."

Colts' early end serves as motivation for better run in 2021

“For me it was Super Bowl or bust, so it was a bust," All Pro defensive tackle DeForest Buckner said.

"Look, Philip needs to make a decision about if he for sure wants to play. Do I think Philip Rivers is a winning quarterback that we can win and go to the Super Bowl with? Absolutely I do."

Taylor-made day sends Colts past Jags, back into playoffs

“There’s not many times you have (a game like) that,” 39-year-old quarterback Philip Rivers said.

“The thing about playoff games, unless you win it all, you’re obviously going to lose one,” said Rivers, who is 5-6 in the postseason.

Colts quarterback Philip Rivers (17) throws during the first half Sunday against the Browns on Sunday in Cleveland.

Browns defensive back Ronnie Harrison, right, intercepts the ball ahead of Colts wide receiver T.Y. Hilton, left, during the second half Sunday in Cleveland. Harrison returned the ball for a 47-yard touchdown on the play.