Week 1 waiver wires always have a December 26-like feel: there’s always discounts on overlooked gifts along with a tireless customer service that patiently endures the run of returns of broken and discarded presents.

Here’s to replacing injured talent and finding those hidden gems that eventually become contributors to many a winning fantasy team. Here are this week’s top waiver wire options:

NYHEIM HINES, RB, Colts: With starter Marlon Mack (Achilles) out for the season, the door of opportunity swings wide open for Hines, who had 53% of the snap counts among Indianapolis’ running backs. Hines scored both Colts touchdowns in Sunday’s loss to the Jaguars while accounting for 73 total yards on 15 touches from scrimmage. He will be a strong must-grab in PPR formats and gets a Week 2 matchup against a Vikings defense that allowed five receptions to Packers running backs in Week 1.

BENNY SNELL JR., RB, Steelers: Snell became the workhorse of the Pittsburgh ground game, rushing for 113 yards on 19 carries in Monday’s win over the Giants. All but one of his carries came after starter James Connor (ankle) left the game, and with Connor’s status uncertain going into Week 2 against the Broncos, expect Snell to receive plenty of attention on the waiver wire. If Connor’s injury lingers, Snell might emerge as a solid RB2 in a Steelers offense that looked like its old potent self upon the return of QB Ben Roethlisberger.

MALCOLM BROWN, RB, Rams: Cam Akers owners were badly hurt as the rookie saw only 33% of Los Angeles’ snap counts. Brown, who received 60% of the snap counts, had 18 carries for 79 yards and scored both of LA’s touchdowns while also catching three passes for 31 yards. For now, it appears Brown is the back of choice for a Rams offense that has the potential to break out upon a shaky Eagles defense in Week 2. If Hines is unavailable, then Brown is a solid Plan B.

SAMMY WATKINS, WR, Chiefs: Remember him? Downgraded in the eyes of fantasy owners, Watkins pulled in seven of his nine targets for 82 yards and a touchdown in the Week 1 win over the Texans. Most expected either Mecole Hardman or Demarcus Robinson to emerge as KC’s WR2, but Watkins wasn’t re-signed to just be filler. With rookie RB Clyde Edwards-Helaire giving the Chiefs another game-altering threat, the spread-out field will work well for Watkins, who can be a WR4/WR5 or flex option in deeper formats.

MARQUEZ VALDES-SCANTLING, WR, Packers: Yes, there were two drops, but Valdes-Scantling did have a 45-yard touchdown catch to highlight a four-catch, 96-yard game against the Vikings. Devante Adams will remain Aaron Rodgers’ go-to and take the bulk of the targets, yet Valdes-Scantling merits attention considering the Packers still lack a solid WR2 behind Adams.

JOSHUA KELLEY, RB, Chargers: Kelley emphatically answered the question of who would be Los Angeles’ RB2 behind Austin Eckler, rushing for 60 yards and a touchdown on 12 carries in Sunday’s win at Cincinnati. Now would be the time to move off Justin Jackson, who came into the season as the expected backup behind Austin Eckler. A sixth-round pick from UCLA, Kelley is a low-end waiver wire pickup with the upside to become a fantasy factor if Eckler were to be out for an extended period.

MYLES GASKIN, RB, Dolphins: Matt Brieda and Jordan Howard were afterthoughts to Gaskin, who had 63% of the Dolphins RB snap counts while amassing nine carries for 40 yards and catching all four of his targets for 26 yards. Miami’s running back-by-committee remains uncertain, but the one sure thing is that Gaskin will play a considerable role, making him a solid option in deeper leagues.

JAMES ROBINSON, RB, Jaguars: A second chance awaits those leagues who may have let Robinson slide prior to Week 1. He solidified his role as Jacksonville’s lead back, rushing for 62 yards on 16 carries and added a 28-yard reception. The rookie from Illinois State accounted for all the carries among Jaguars backs and is in play to be a good flex option in most formats leading into the Week 2 matchup against the Titans.

LOGAN THOMAS, Washington Football Team: Thomas caught four of his eight targets for 37 yards and a touchdown in the Week 1 win over the Eagles. Only WR Terry McLaurin had more receptions than Thomas, a former quarterback who is now developing into a possible matchup problem. The Cardinals, who face the Washington Football Team in Week 2, have long been a friendly matchup for opposing tight ends. Thomas makes for a good replacement for fantasy owners seeking to replace Cowboys starter and potential sleeper Blake Jarwin, who will miss the rest of the season with a torn ACL. Don’t be shocked if Thomas works his way to becoming a borderline TE1 as the season goes on.

ROBBIE ANDERSON, WR, Panthers: Most of his Week 1 production came on a 75-yard touchdown catch from Teddy Bridgewater, yet Anderson was targeted eight times, finishing with six catches for 115 yards. In a Panthers offense that lacks a legitimate threat outside of RB Christian McCaffrey, Anderson staked his claim to at least compete with DJ Moore and Curtis Samuel for targets. He’s worth watching in Week 2 as the Panthers will likely be in catch-up mode against the Buccaneers.

RUSSELL GAGE, WR, Falcons: Gage had the first 100-yard game of his career in Week 1, pulling in nine of his 12 targets for 114 yards. The Falcons’ pass-happy mindset was on full display as they tried to play catch-up to the Seahawks, and while TE Hayden Hurst is expected to play a bigger role in the offense, don’t dismiss Gage, who should be due for 7 to 10 targets in what could be another afternoon of playing catch-up at the Cowboys in Week 2.

SCOTTY MILLER, WR, Buccaneers: The second-year wideout looked like a Julian Edelman clone, catching five passes for 73 yards in Tom Brady’s Tampa Bay debut in Week 1. The Buccaneers are loaded with offensive options, but considering how Brady utilized his slot receivers during his career in New England, it stands to reason that Miller should be a good stash on fantasy benches in deeper leagues.

Send us a photo demonstrating your Bears, Packers or Colts fandom with a note explaining why you’re such a fanatic, along with your contact information.

Submissions will close on Sept. 8. That will be followed by a week of online voting that will take place Sept. 9-15. The winners will be announced on Sept. 16. Entries will be placed in Bears, Packers or Colts galleries as they are received. The biggest fan for each team will win a $25 Gift Card!

Also, predict the Win/Loss record for each team for your chance to WIN an additional prize!

Get more information and enter the contest by clicking here.

“Like, 2-0 is not a bad situation,” defensive tackle Akiem Hicks said. “I don’t care how you get it. Two-and-oh is delicious. I’ll eat that every day of the week.”

Bears' chairman wants to talk to Brian Urlacher about posts

McCaskey would like to talk to their former star linebacker about his Instagram activity last month in the wake of the police shooting of Jacob Blake in Kenosha, Wisconsin.

MATT ERICKSON: Is this the week the real Bears stand up?

Here's a look at the Week 3 NFL picks by Matt Erickson.

“After the first carry, you kind of get in that mindset, you realize it's football and you focus and lock in and you go play after play," he said. “You do that, and pretty soon it’s the fourth quarter."

Are you ready for some (strangest in our lifetimes) football?

Here's a look at the Week 1 NFL picks by Matt Erickson. 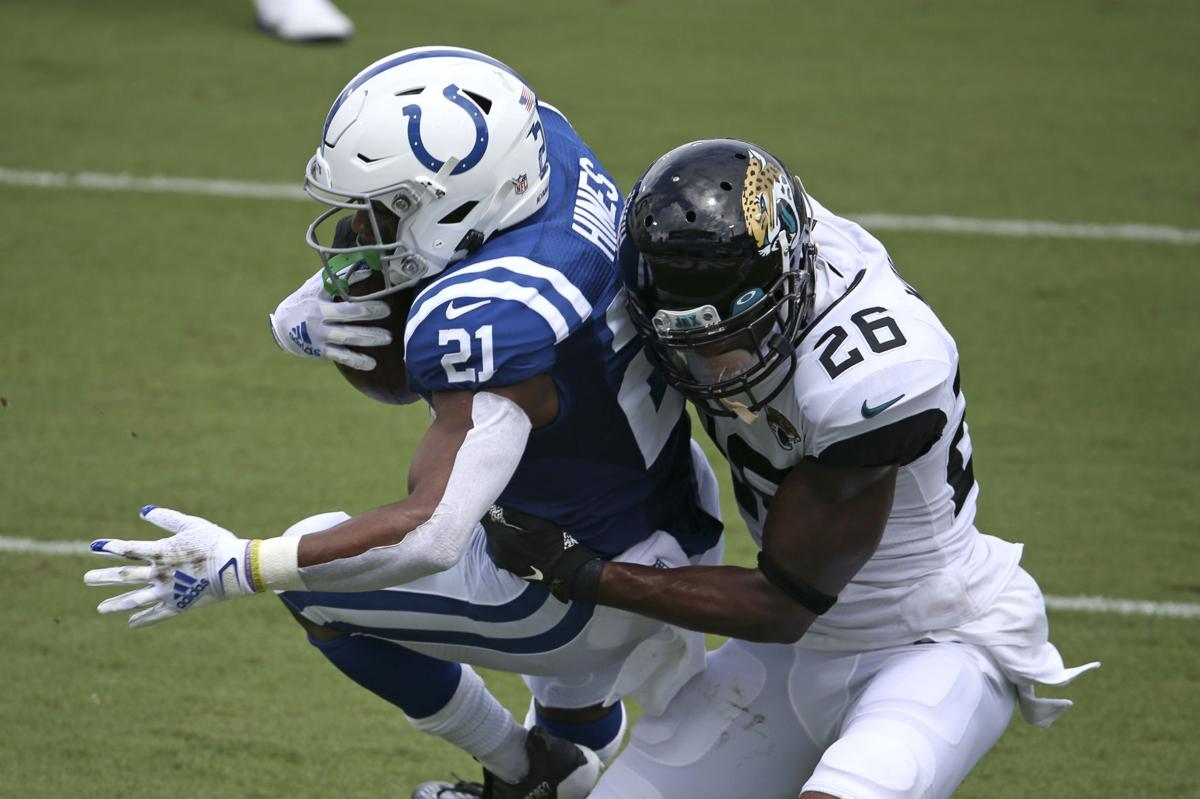 Indianapolis Colts running back Nyheim Hines (21) scores a touchdown on a 12-yard run as he is brought down by Jacksonville Jaguars safety Jarrod Wilson (26) on Sunday. 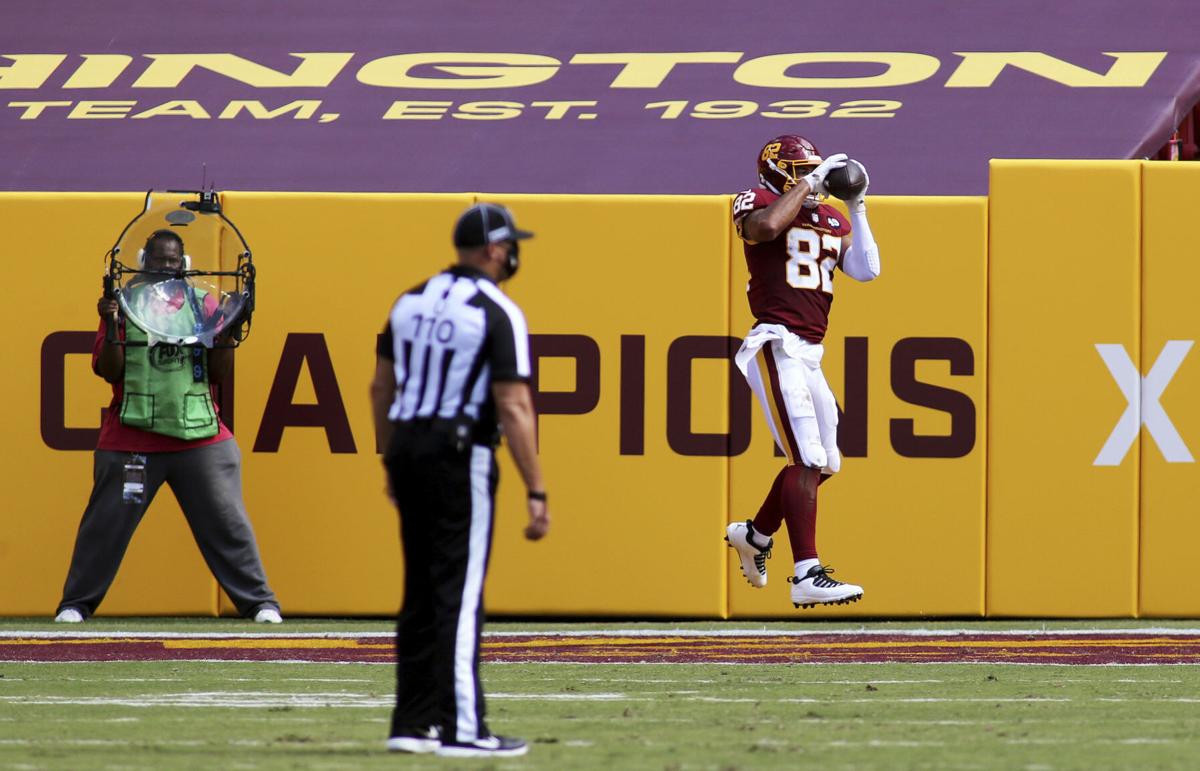