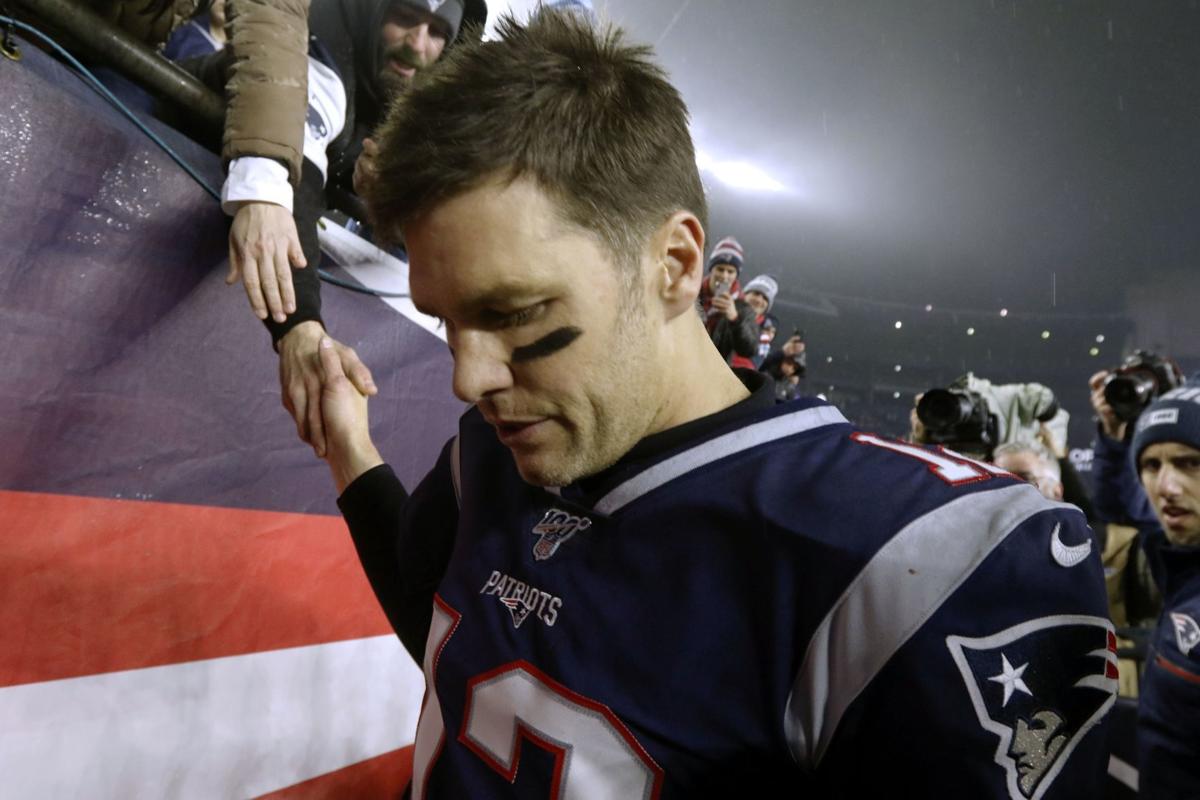 New England Patriots quarterback Tom Brady shakes hands with a fan as he leaves the field after losing an NFL wild-card playoff football game to the Tennessee Titans on Saturday. 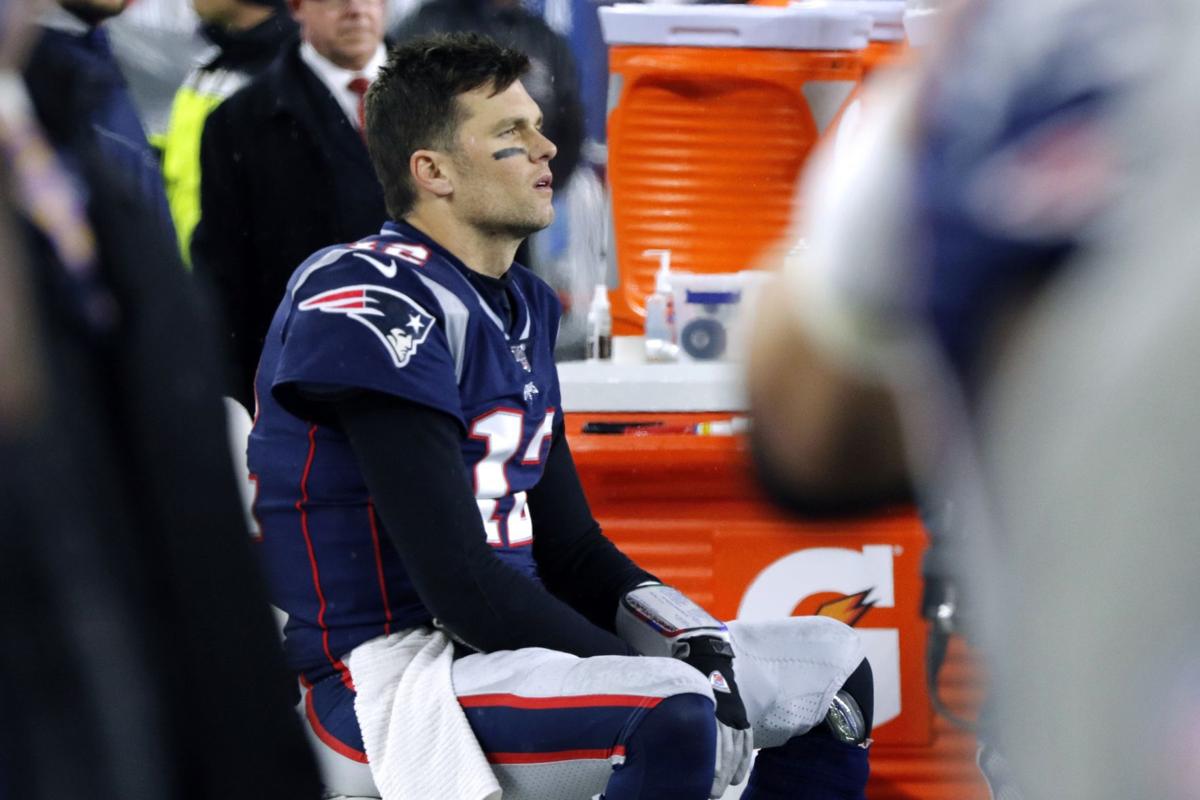 New England Patriots quarterback Tom Brady sits on the bench after throwing an interception that Tennessee Titans cornerback Logan Ryan returned for a touchdown on Saturday.

FOXBOROUGH, Mass. — Tom Brady walked off the field at the end of his 20th NFL season and said he plans to be back for another, when he will be 43 years old.

If not in New England, somewhere else.

The Patriots quarterback said after a season-ending 20-13 loss to the Tennessee Titans on Saturday night that he has no plans to retire, putting owner Robert Kraft and coach Bill Belichick on the clock to either re-sign him or watch the franchise's greatest player suit up somewhere else.

Brady completed 20 of 37 passes for 209 yards with no touchdowns, throwing a game-clinching interception that was returned for a touchdown. That left him with with a lower quarterback rating than Ryan Tannehill, who threw for a total of 72 yards in his first career playoff appearance.

It was the earliest postseason exit for Brady and the Patriots in a decade.

“I think we're all running out of time and chances, every year that goes by," said Brady, who was without a touchdown pass for the second consecutive postseason game — and just the fourth time since 2001. "I don't think I'm the only one in that category.”

A six-time Super Bowl champion, four-time Most Valuable Player of the NFL title game and three-time winner of the league MVP, Brady is not under contract for next season. Although he has said he wants to play until he is 45, he is coming off perhaps the worst (non-injury) season of his career.

“Who knows what the future holds? We'll leave it at that,” Brady said. “I love the Patriots. It’s the greatest organization. Playing for Mr. Kraft all these years, and for coach Belichick, there’s nobody who’s had a better career than me, just being with them. So I’m very blessed."

Brady threw for 4,057 yards and 24 touchdowns this season, with eight interceptions. But he completed fewer than 56% of his passes six times in the final eight games of the year, including a season-ending loss to a four-win Miami team that cost the Patriots a first-round bye and then the wild-card loss to the Titans.

Still, the love from New England fans has never waned.

A fan in the front row hung a banner reading, “Please Stay Tommy.” The rest of the crowd for what could be the last home game of his Patriots career showed its love by chanting his name a half-dozen times throughout the night.

But Brady's last pass was intercepted and returned for a touchdown by Logan Ryan, a teammate during two championship seasons, sending the Titans to a divisional round matchup with the Baltimore Ravens. Brady walked off the field, his helmet off and his head hanging low, surrounded by photographers and security, before jogging the last few steps to the stairway that leads to the Patriots locker room.

Whether he will ever be back could be the most interesting drama of the offseason.

“I don’t want to get too much into the future and stuff,” he said. “I just don’t know what’s going to happen and I’m not going to predict it. No one needs to make choices at this point.”

Although the Patriots have at times attempted to groom Brady's successor — including Jacoby Brissett, now with Indianapolis, and Jimmy Garoppolo, who's with San Francisco — rookie Jarrett Stidham is the only other quarterback on the New England roster. He threw four passes this season.

Patriots coach Bill Belichick refused to say whether he thought Brady would be back. Defensive captain Devin McCourty said it's difficult to predict what will happen in the offseason, when football decisions are strictly about business.

CHICAGO (AP) — A former University of Wisconsin football player who is the brother of a standout in the 2011 Super Bowl surrendered to Chicago police on Saturday in connection with the deaths of two people who were found with gunshot wounds on a road in Janesville, Wisconsin.

Analysis: Offseason Fix: Where are the free QBs headed?

Now that we know Philip Rivers won't be leading the Chargers into SoFi Stadium in September, the muddied waters of NFL quarterbacking have been cleared a bit.

The agent for Steelers quarterback Mason Rudolph says Cleveland defensive end Myles Garrett opened himself up for potential legal action after reiterating his claim that Rudolph used a racial slur shortly before their infamous brawl in November.

SPRINGFIELD, Ill. (AP) — Bob Thomas, whose legal career led him to the state's highest court, but only after a decade as the Chicago Bears' placekicker, announced his retirement on Monday.

New England Patriots quarterback Tom Brady shakes hands with a fan as he leaves the field after losing an NFL wild-card playoff football game to the Tennessee Titans on Saturday.

New England Patriots quarterback Tom Brady sits on the bench after throwing an interception that Tennessee Titans cornerback Logan Ryan returned for a touchdown on Saturday.