JIM PETERS: There's no disrespecting the socks with Washington Twp. baseball
Share this
{{featured_button_text}}
1 of 2 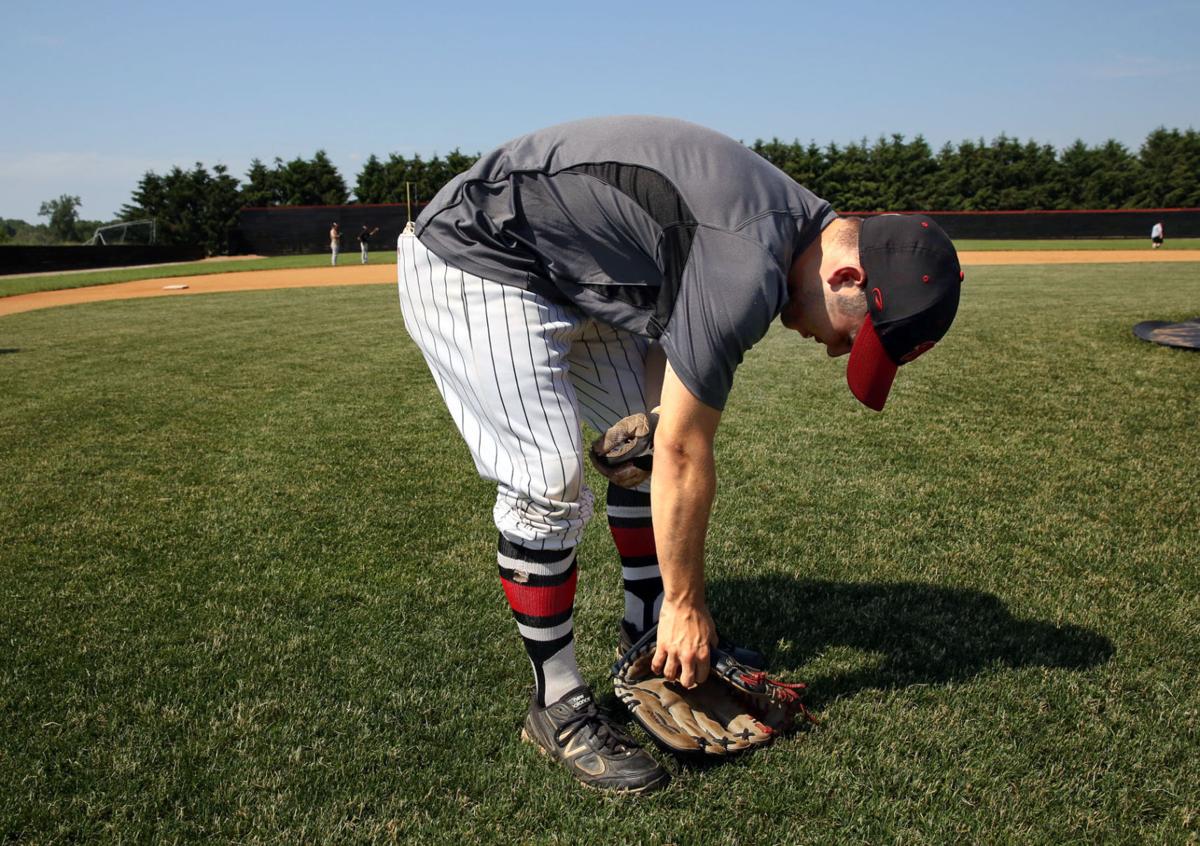 Washington Township's Alex Lawson wears stirrup socks during practice Wednesday at Senator Park. The socks originated with Lawson's brother Eric in the late 1990s and are now worn as a display of respect to Eric, a Sergeant First Class in the Army who is a Purple Heart recipient. 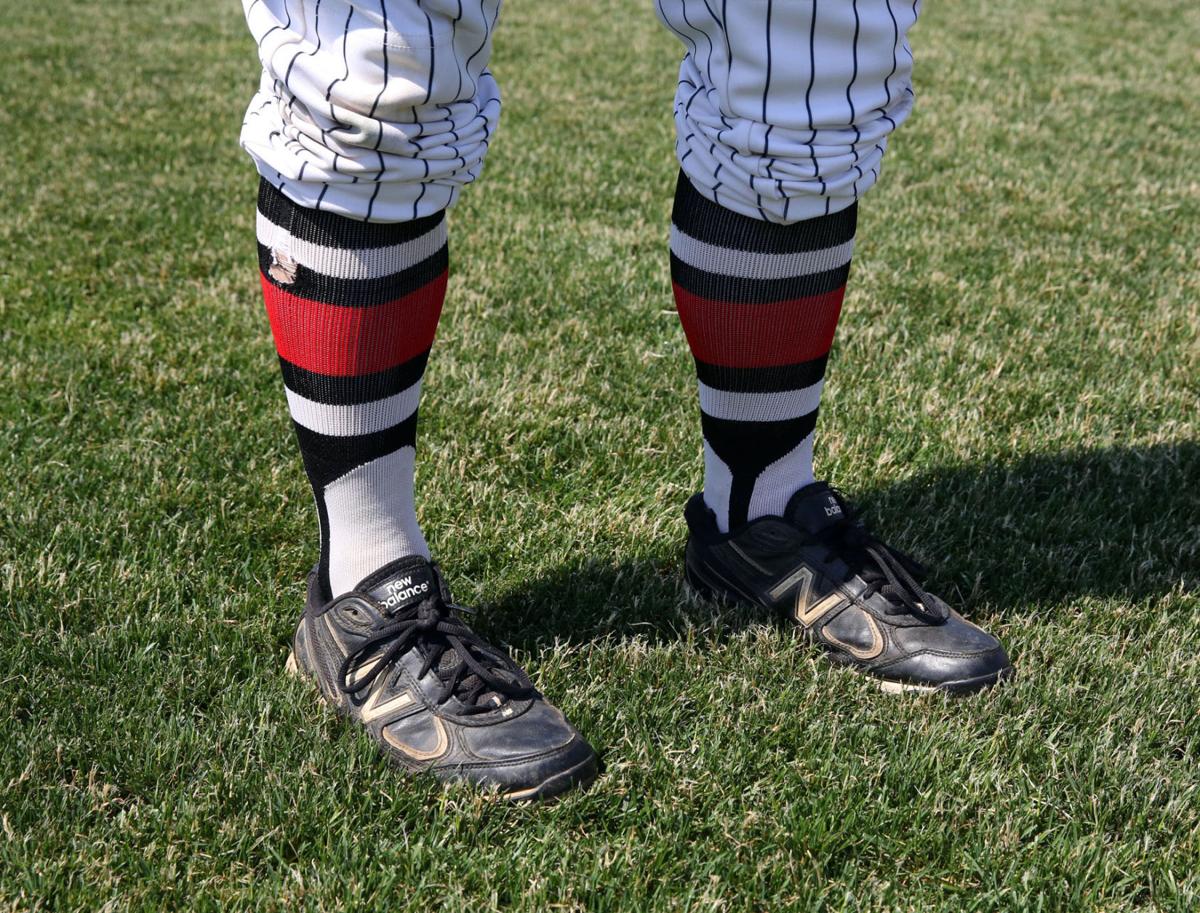 Washington Township's stirrup socks are a part of the Senators' popular uniforms. They originated in the late 1990s when Eric Lawson wore a version of them to practice and are now a display of respect to Lawson, a Sergeant First Class in the Army who is a Purple Heart recipient.

It started as a whim, an eighth grader trying to draw attention at baseball practice. Nearly 20 years later, it's a display of respect to the player who became a decorated Sergeant First Class in the Army.

"I remember they were ugly," Eric Lawson, a 2000 Washington Township grad, said of the black and red soccer socks, worn below pulled-up pants legs. "It was one of those things, I wasn't very good at that age, and I needed to do something to stand out."

New Senators coach Randy Roberts liked the idea of the stirrups, if not the style, and the next spring, he incorporated them into the uniform, a classic look that is still popular.

Eric was a sophomore at Indiana with no military plans at the time of the Sept. 11, 2001 tragedies.

"When the towers fell, it made the decision for me," he said. "I told my mom I was enlisting, but I promised to finish (the school) year."

In Aug. 2002, Eric reported to Fort Benning, Ga., for basic training. He was assigned to the 101st Airborne Division at Fort Campbell, Ky. He has had three tours of duty in Iraq and one in Afghanistan. On March 14, 2006, Eric's unit was in southwest Baghdad when they were hit by mortar fire. Among 20 injured soldiers, he took shrapnel to his leg.

"Wrong place, wrong time," he said. "Nothing too serious."

Serious enough to earn a Purple Heart, an honor that is a tremendous source of pride back home.

In the process, the socks took on a greater meaning. They now stood for something much bigger than baseball.

"They're a tribute to someone who puts his life on the line for his country," Roberts said. "You have to earn them."

Over the years, when his team didn't play up to that standard, Roberts made them wear plain white socks instead of the stirrups. The wake-up call has always worked.

"The right term would have to be speechless," Eric said. "I've known Roberts more than half my life. He's like a second father to me. Every time I'm home, I try to make it a point to see him or he stops by the house. To this day, we can say two, three words, have no other conversation and we know what the other is thinking."

Roberts' firm, no-nonsense style is well-known. Concepts like discipline, respect and accountability, established at home and reinforced at Senator Park, have contributed to Eric's job with Uncle Sam.

"He doesn't put up with any excuses," he said. "I remember the number of hours we put in, holding the bat by your right ear to get a bunt down the third base line. Repetition. You do it right or don't do it at all. For him, it's quality over quantity. It prepares you. Life doesn't work on my schedule. It has its own schedule. People rely on you to put in your time and effort to get something done and do it right."

Eric isn't the Lawson's only soldier. Steven is an Army captain at Fort Campbell. Alex will go to IU, but is also considering the military.

"A big part of my childhood was going to bases to see them come home," Alex said. "It makes me very grateful. Good effort, hard work. It's how our parents raised us. It's not just me, it's everyone in Washington Twp."

Eric was stateside a year ago and flew in from Fort Sill, Okla., for semistate. Alex didn't play, but it was the first time Eric saw him in person in Senators stirrups. Stationed in South Korea with the Second Infantry Division, Eric won't make it back Saturday, but he'll follow the game via Twitter on his I Pad. Never mind the 2 a.m. start there.

"If any coach in Indiana deserves to at least get to Victory Field, it's Randy Roberts," Eric said. "A baseball team at a small school, you really have to give everyone a chance and he gave us all a chance. Now we're a team everyone in the state knows in Class A. When you play Washington Twp., you know you're going to have to fight for everything you get."

MERRILLVILLE | His first name is as unique as he is.

Washington Township's Alex Lawson wears stirrup socks during practice Wednesday at Senator Park. The socks originated with Lawson's brother Eric in the late 1990s and are now worn as a display of respect to Eric, a Sergeant First Class in the Army who is a Purple Heart recipient.

Washington Township's stirrup socks are a part of the Senators' popular uniforms. They originated in the late 1990s when Eric Lawson wore a version of them to practice and are now a display of respect to Lawson, a Sergeant First Class in the Army who is a Purple Heart recipient.