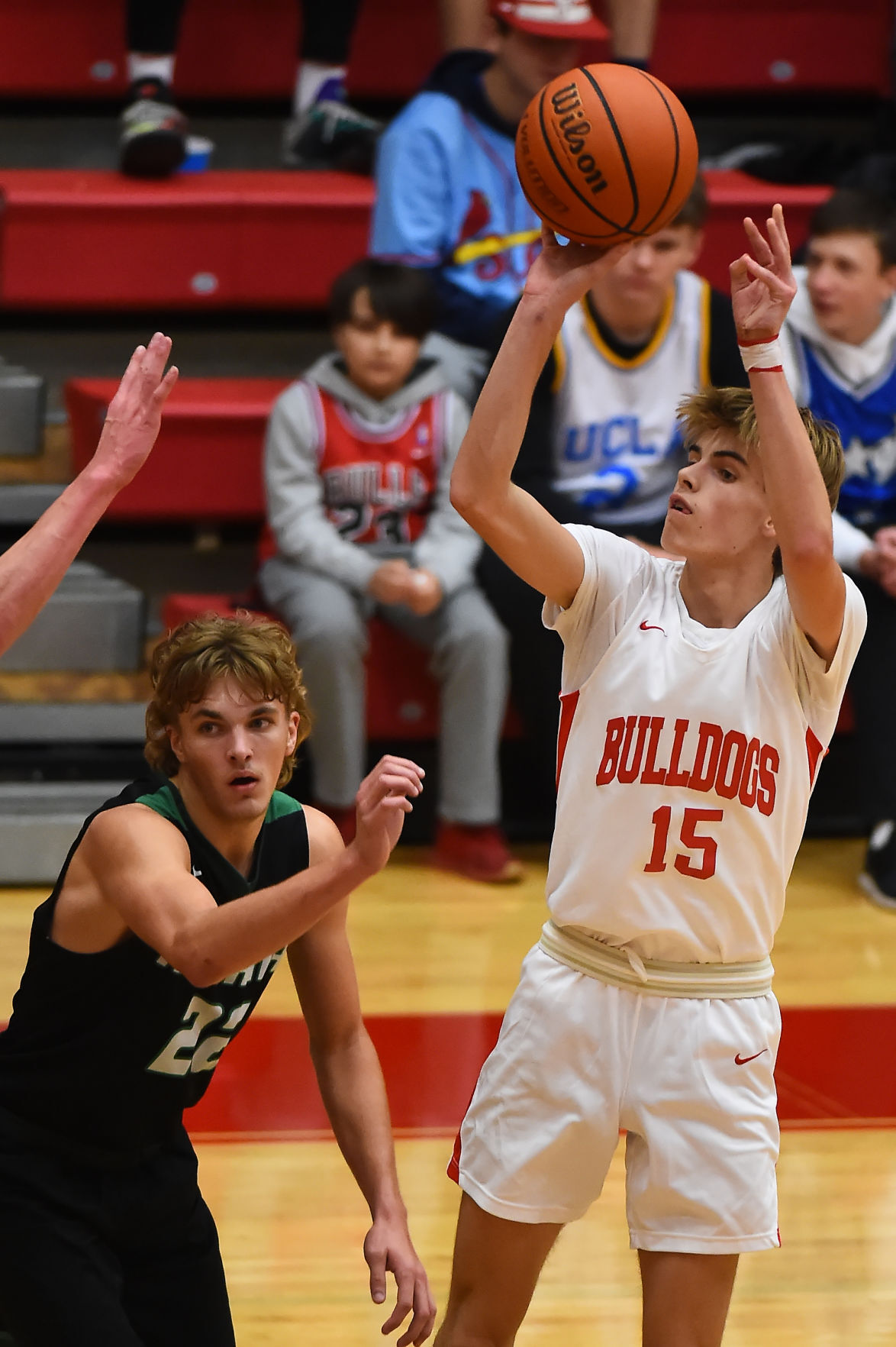 Crown Point’s AJ Lux gets a shot off over Illiana Christian’s Ian Van Beek in the third quarter Tuesday at Crown Point. 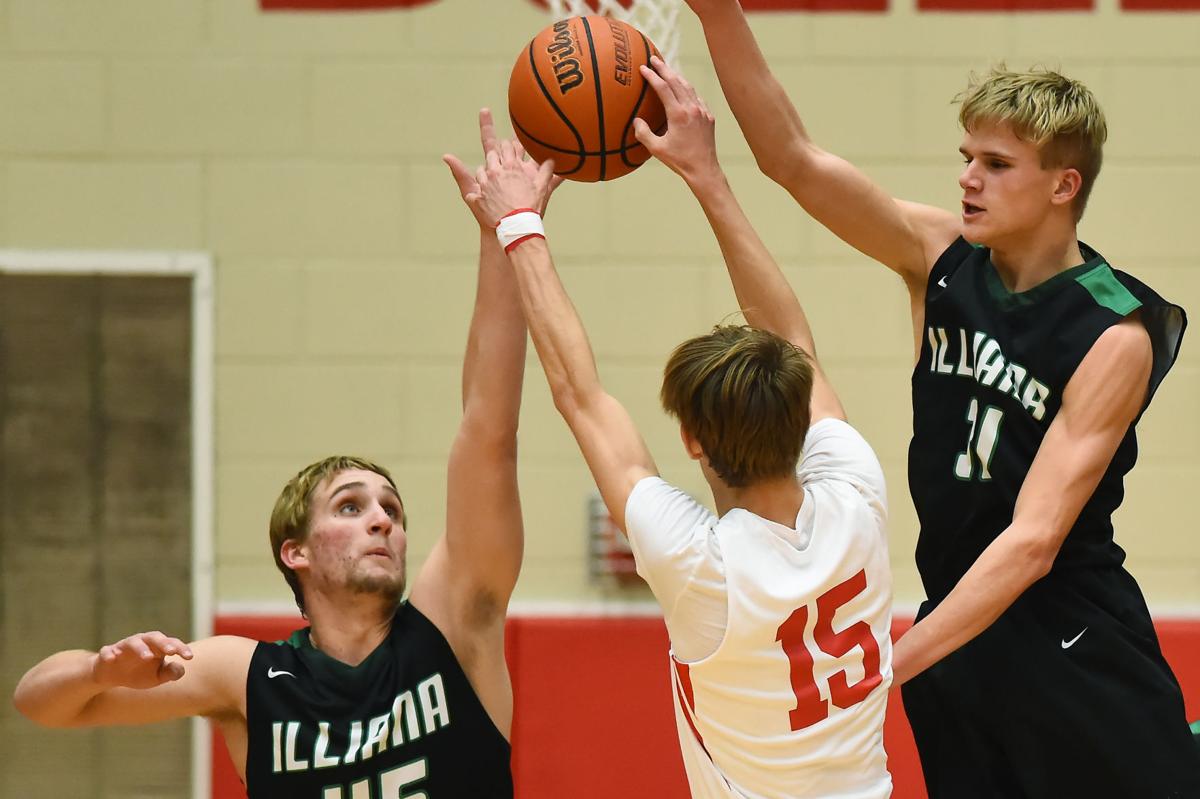 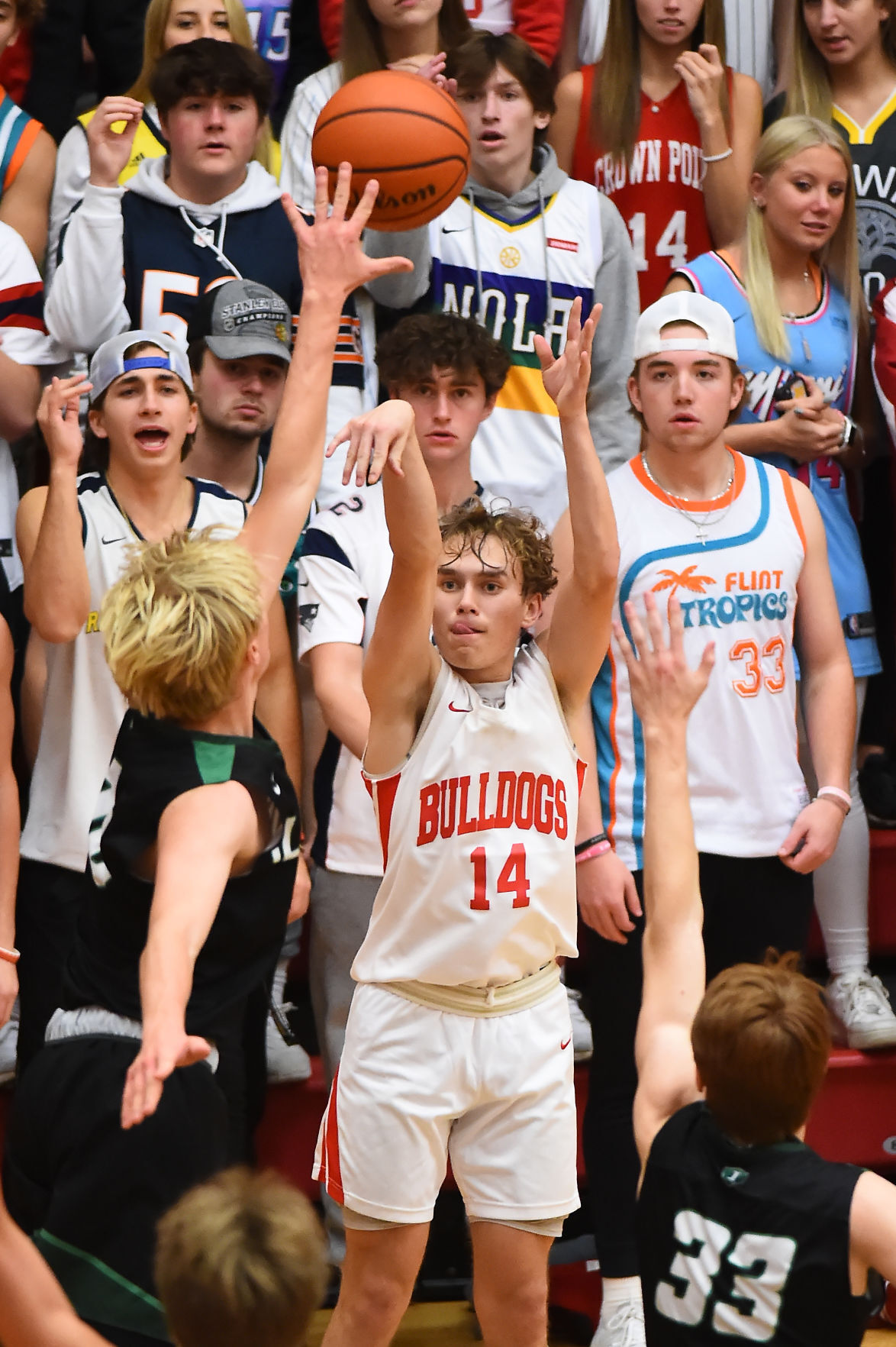 Crown Point’s Drew Adzia takes a 3-pointer over Illiana Christian’s Adam Gibson and Adam Walters to put the Bulldogs up 37-25 over the Vikings in the third quarter Tuesday at Crown Point.

The Bulldogs weren’t able to get great looks. When they did, the shots didn’t fall. The Vikings had two blocks, forced a five-second call and contested everything. Illiana led by 12 after one frame.

Then AJ Lux began finding space. The Crown Point junior hit five 3-pointers in the second quarter, scoring 17 of his 20 points. The Bulldogs took the lead and didn’t look back, eventually winning 45-35.

“I was just trying to get my team back on track. It was our first game back,” Lux said. “My teammates were just making plays, setting me up (in the second quarter). My teammates were setting good screens all night.”

The script flipped in the second quarter, with Crown Point stifling the Vikings. The Bulldogs led 23-17 at the break.

Coach Clint Swan said his team showed its early season issues more on the defensive end than on offense.

“We weren’t really playing to our principles, getting beat on middle drives and we weren’t really helping each other," Swan said. "There were a lot of holes, defensively, in that first quarter. We were much better in that regard after that. Also, nothing helps your defense more than making shots.”

“If you’re going to hold a team like that to zero in the first quarter, it's a credit to our team. But we knew we had work to do in the second and they started hitting shots. Lux got hot and we missed him on some rotations coming out,” Vikings coach Tom Roozeboom said. “If we fix that in the second quarter, who knows what this score may be.”

Senior point guard Drew Adzia wasn’t able to score until well in the second half for Crown Point (1-0), but Swan said his contributions were important and will be all season. Adzia finished with nine points and seven rebounds.

“He did a great job handling the ball. Defensively, I thought he was very good,” Swan said. “Hitting a couple shots there in the second half was big for him. I think he was putting a little pressure on himself. After he knocked down a couple shots you could see him getting a little more comfortable.”

The Vikings were without junior Kevin Corcoran, who had 10 points in the season opener against Kouts. Corcoran was out of town on a school trip.

“We fully support kids that want to do extracurricular things. It was obviously a key piece but I’m not going to blame it on that. We had other guys in the rotation and we needed to get the job done,” Roozeboom said. “We just fell a little bit short.”

Glenn Robinson III is combining his passions of basketball and philanthropy, and through the ARI Foundation will teach life skills off the court in his new program.

The most wonderful time: Guide to this week's holiday hoops events

Here’s a guide to events with Region teams competing this week.

Crown Point’s AJ Lux gets a shot off over Illiana Christian’s Ian Van Beek in the third quarter Tuesday at Crown Point.

Crown Point’s Drew Adzia takes a 3-pointer over Illiana Christian’s Adam Gibson and Adam Walters to put the Bulldogs up 37-25 over the Vikings in the third quarter Tuesday at Crown Point.