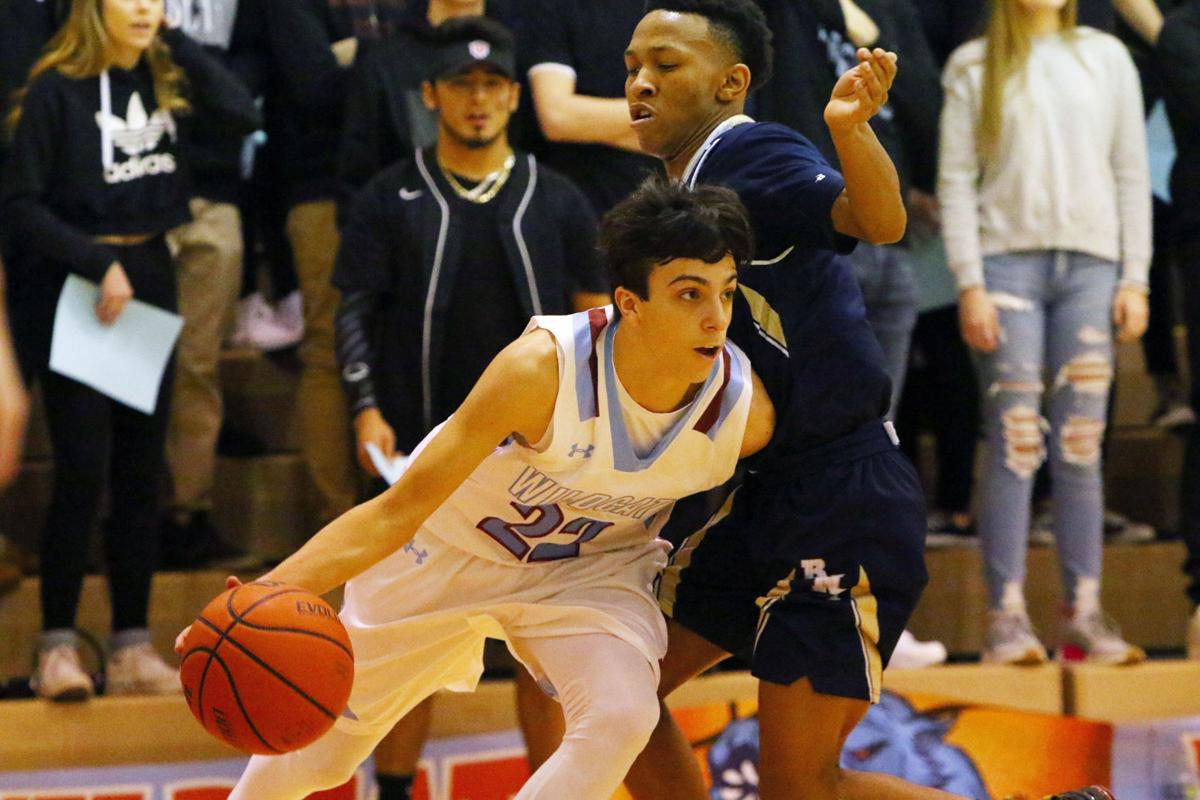 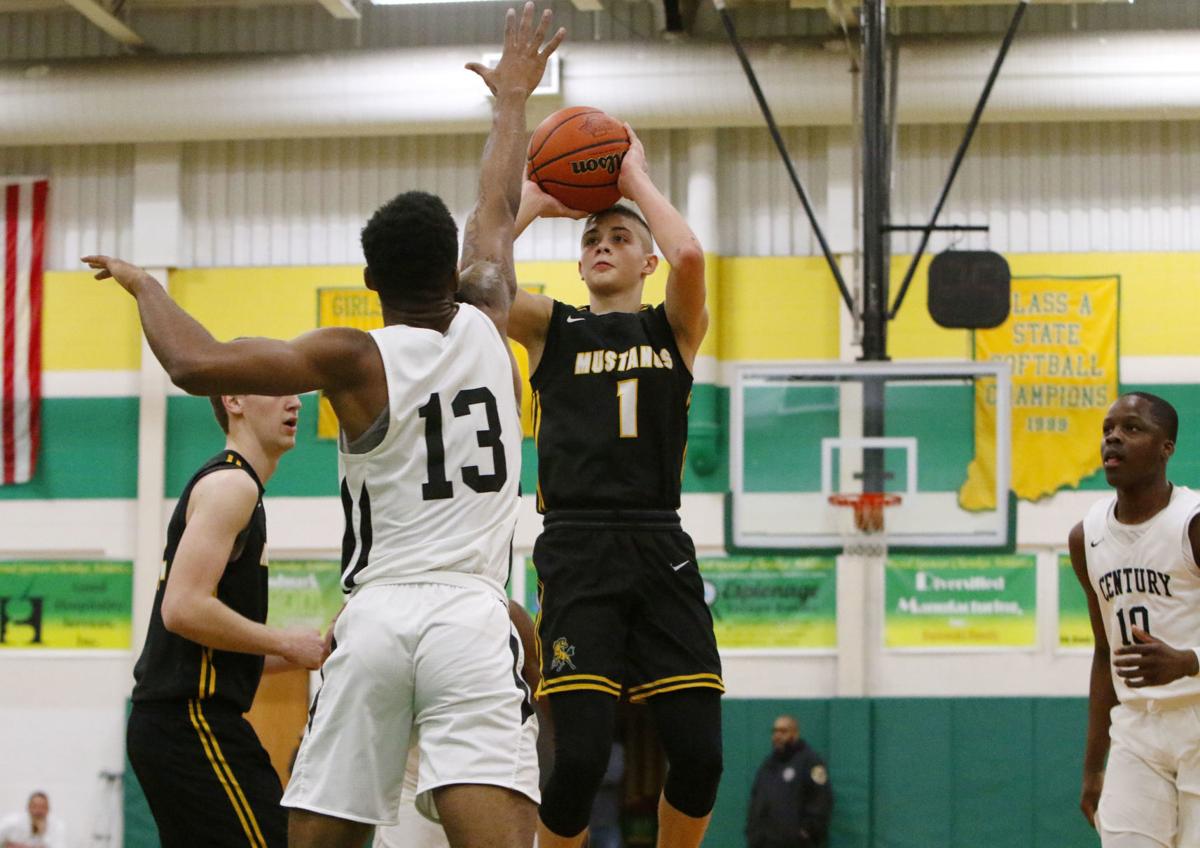 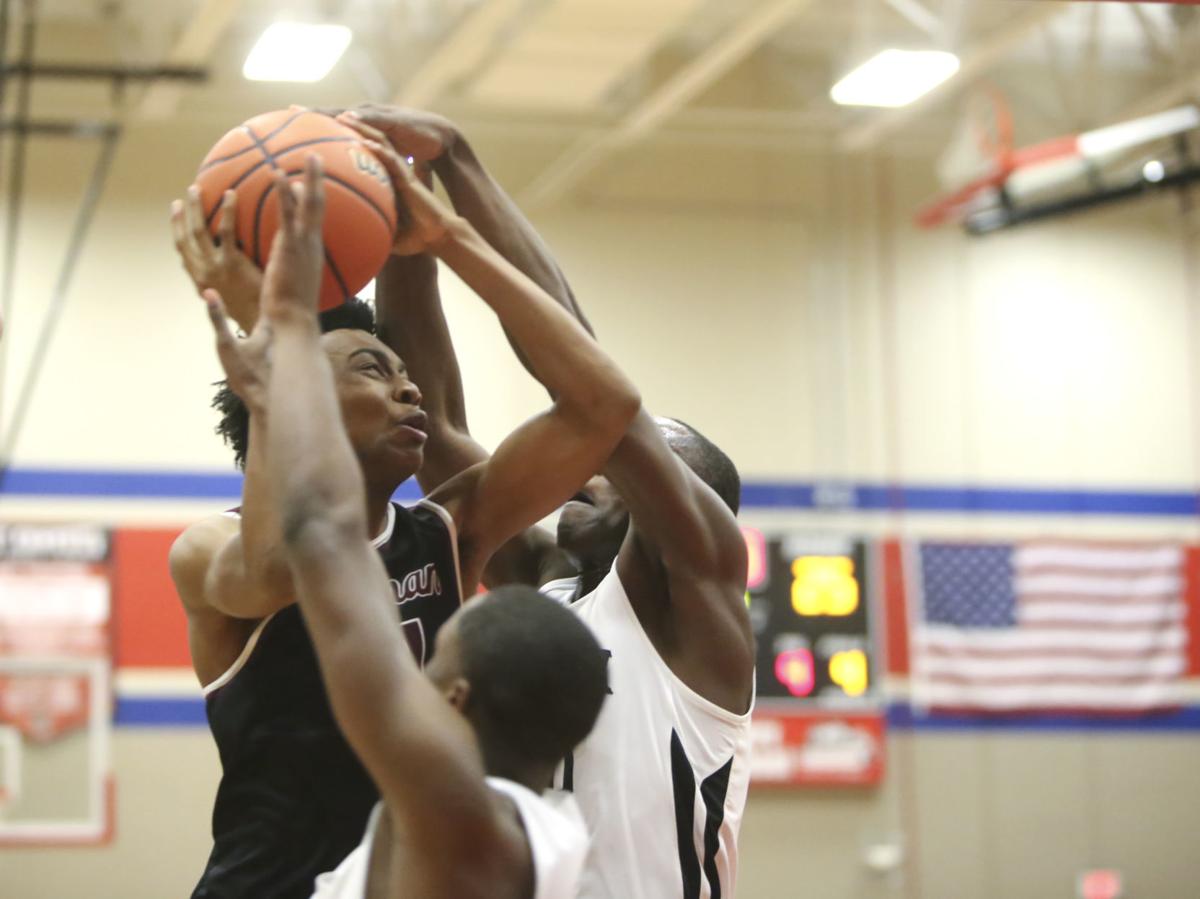 Bowman’s Koron Davis fights his way up to the basket against 21st Century on Dec. 6. The junior is averaging 25.2 points per game.

Dominic Lucido entered his senior season with a few goals in mind.

Three games into his final prep campaign, Hanover Central’s standout guard has already accomplished one of them.

In a 91-41 rout of Whiting on Dec. 6, Lucido scored an efficient 21 points — shooting 9-of-11 from the field — to eclipse 1,000 points in his career. The senior is only the fifth boys basketball player in school history to reach the mark and did so on an and-1 layup. His subsequent free throw officially put him at 1,000.*

“I knew I was close, but I actually thought I needed one more point,” Lucido said. “I didn’t know the free throw was my 1,000th point, so when I shot it and it went in and everyone started cheering, I was kind of surprised. I guess that made it a little better that I didn’t know.”

This season, Lucido is averaging 14.3 points, 6.7 assists, 5.0 rebounds and 2.0 steals per game. His strong start has helped the Wildcats open the year 3-0, and Hanover Central coach Bryon Clouse expects Lucido to continue leading his squad.

Even as a freshman, Clouse said he saw a lot of potential in Lucido, and it was evident that he could leave his mark on the program.

“I’ve enjoyed watching him grow up more than him reaching 1,000 points,” Clouse said. “We thought he’d split time with the freshman team (when Lucido entered high school), but after two or three games, we quickly realized that he was our guard of the future.”

The Wildcats won their first sectional title in 33 years last season and are hungry for more success. Clouse believes all of his players, including Lucido, have shown unwavering focus, especially on the defensive end.

“After winning the sectional championship last year, I think that trickled over into the summer,” Clouse said. “We told them that defense wins championships, and all of the guys have bought in defensively, and so far we have held teams below 50 points.”

With a new coach and new system, Michigan City expected an adjustment period early on. Through four games, the Wolves are playing about as well as coach Tom Wells could've hoped for.

City is 3-1, with its only loss coming at No. 4 West Side in a 55-53 game. While the Wolves faced Andrean without star 59ers big man Kyle Ross, their 64-56 win Tuesday was still another nice step forward. And they own blowout victories over Westville and Marquette.

“There's no doubt about it — it has been a good start,” Wells said. “You're two points away from starting 4-0. In that particular game, if we could've gotten ourselves to the free-throw line, we would've won that.”

Wells said the Wolves did a much better job of getting the ball inside against Andrean and shot 24 free throws in the win. That's big for City, as Wells has his team playing small with three true guards often surrounded by versatile forwards Evan Bush and Jalen Bullock.

City's goal has been to amp up its pace, but sloppy play hasn't followed. That has been a huge reason for its success, as veteran guards like Tahari Watson (15 points per game) have played clean basketball. The Wolves committed 11 turnovers against Andrean, and that's their season high.

For the second straight season, Kouts has carried an undefeated start into mid-December. Once again, the 4-0 Mustangs' high-powered offense is behind it.

Junior guards Cole and Cale Wireman are up to their usual tricks, combining for 38.8 points and 9.6 assists per game. Senior big man Connor McCormick follows with 13.5 points per game, while junior forward Hunter Kneifel is at 12.5. The Mustangs score 84.5 points per game.

“Obviously, this group wants to get out and run like last year's group did,” coach Kevin Duzan said. “We've got guys that can shoot it. The defensive side of it is a work in progress, because we've gotta learn not to foul better than we do.”

Kouts picked up a 51-47 overtime win over Kankakee Valley on Saturday, although the Mustangs had to come back after blowing a 21-point lead. They topped 2019 Class A regional semifinalist Covenant Christian 91-45 on Dec. 6, but South Central and 6-foot-7, 245-pound center Brendan Carr will pose a test to open Porter County Conference play Friday.

The Mustangs currently hold The Keg, and Duzan said he knows every league opponent will be gunning to take it.

“Conference is our main priority — we know that if we drop a conference game, you end up behind the 8-ball in the round robin,” Duzan said. “We're gonna have our hands full with (Carr), and they've got guards who can put it on the floor and get to the basket.”

There are a number of high-level guards in the Region.

21st Century's Johnell Davis, Merrillville's Keon Thompson Jr. and Lowell's Christopher Mantis have all proven that they're among the best backcourt players in the area.

Bowman's Koron Davis is making a case to be included in that group, as well.

The 6-foot-5 junior guard has helped the Eagles — who have faced a tough early-season schedule — begin the year 4-3, with a notable nine-point road victory over Crown Point.

Davis is averaging a team-high 25.2 points, 5.7 rebounds and 2.7 steals per game and has already notched two 30-point outings.

Bowman has high hopes for this season after losing in a Class 2A sectional championship to eventual state champion Andrean last year, and Davis is commanding the charge.

*This story has been corrected from a previous version.

Merrillville's Keon Thompson Jr. is one of the most prolific scorers in the state, and the fire he plays with is in remembrance of his late grandfather, Ramon Torres.

Bowman’s Koron Davis fights his way up to the basket against 21st Century on Dec. 6. The junior is averaging 25.2 points per game.