The LaPorte senior knows when his first shot goes in, it could be a good night on the court. The philosophy he learned from his dad, Steve, by way of the legendary Rick Mount, is that when the first two shots go in, it could be a great night.

Ott-Large has had plenty of great nights for the Slicers and his name will forever be in the LaPorte record book after he became the 11th player in program history to score 1,000 career points. The senior reached that mark on Feb. 6 against Valparaiso. He then came back to score 27 points in the first half against Kankakee Valley on Feb. 8.

“Knowing the history of LaPorte basketball, and all the players that have come through here, it means everything,” Ott-Large said.

Ott-Large learned the game from his father, but that’s hardly the only family connection he has to basketball. He’s been trained by his older cousin Gage, a former LaPorte star in his own right. Two other cousins, Rylee and Ryin Ott, have starred for the LaPorte girls basketball team. Ott-Large’s younger brother Grant is a sophomore for the Slicers this season and is well on his way to stardom.

“We have a half court in my backyard and everyone has played there for generations,” Ott-Large said. “Hard work really does pay off — all of those nights working or those early mornings. When you love something as much as we do, it really shows.”

Ott-Large tore his ACL during sectionals of his freshman season and missed most of his sophomore year. LaPorte coach Kyle Benge has watched as the young star morphed into a team leader, and the third-year coach is eager to see what Ott-Large has in store for the rest of the season.

“He has those nights where everything is falling for him,” Benge said. “We’re going to need more of that from him in the last couple games as we move toward sectionals. Getting to 1,000 points was an awesome moment, and you can see that some of the pressure is off a little bit now.”

Johnell Davis is one of the most prolific scorers in the state, and he proved it once again with a herculean effort on Tuesday.

“(Davis) is an exceptional basketball player,” 21st Century coach Rodney Williams said. “He knows how to get his shots, and he’s been pretty accurate. He shot the ball 40 times and hit 21 out of 40, and that’s better than 50%.”

Although his career night came in defeat, Davis still made history by eclipsing German as the Cougars’ all-time leading scorer. German finished his prep career in 2016 with 2,020 points, while Davis has now scored 2,047 points with four games left in the regular season.

Nick Anderson has had a handful of noteworthy offensive performances this season.

None may have been better than the show he put on against EC Central on Tuesday.

Lake Central’s senior guard drained a school-record 11 3-pointers in the Indians’ 89-48 road win and finished the night with a career-high 44 points. Anderson has made five or more 3-pointers in five games this year and leads the team in scoring at 24.5 points per game.

“When I was warming up, I could tell that I was kind of feeling it,” said Anderson, who broke the previous school record of nine 3-pointers. “Then, when I hit my first couple of 3s that were deep, I was like, ‘OK, I might be able to do something here.’ And yeah, I ended up putting up 11 3s and scoring 44.”

During Dave Milausnic’s 16 years as Lake Central’s boys basketball coach, a couple of marksmen have come through his program. However, what separates Anderson from his predecessors is his ball-handling ability.

“I’ve had two high-level shooters in Matt Meneghetti and Skyler Smith,” Milausnic said. “They were more spot up (shooters) and coming off screens, but Nick has been knocking down shots off the dribble, as well.”

In a tie game against Blackford on Feb. 8, Andrean’s junior guard — who is also a standout wide receiver on the football team — had faith that junior forward Ben Jones’ potential game-winning 3-pointer would go in. But just in case the shot went awry, Flesher positioned himself for an offensive rebound.

He made the right choice.

Jones’ attempt was short, and just before the final horn sounded, Flesher snatched the rebound away from two Bruins players and converted a layup at the buzzer that lifted the 59ers to a 70-68 road win.

“I knew I had to just go get the ball,” said Flesher, who is averaging 12.1 points per game. “So, my receiver skills kind of came in for me there, and I jumped and grabbed it and put it back up with no time left.”

“He’s been a little more consistent for us this year,” Stangel said. “He has the knack to go in there and make plays.”

After a remarkable football campaign, Marcus Hardy could have passed on competing with Morton’s basketball team.

The junior is one of the top wide receivers in the Region and has the potential to play at the next level. However, he still wanted to represent the Governors on the hardwood, and the 6-foot-3 forward's freakish athleticism was evident in a 90-63 road victory against Whiting on Feb. 6.

Hardy scored a career-high 33 points, shooting 15 of 22 from the field, and also grabbed a team-high 12 rebounds.

“Once I got a dunk, I knew they we starting to give up, so I decided to just take advantage,” said Hardy, who is averaging a team-high 12.5 points per game. “My teammates — Ahmad (Ferguson), Miguel (Burns), Amare (Brokemond), Ladaion (Barnes) — were all passing me the ball. We were all contributing, but I was just doing the most scoring.”

“We’ve kind of eased him in,” Pio said. “He’s been bothered by a bit of knee soreness for the last two months, but now it’s kind of starting to feel pretty good. So, I expect to see a lot more of what we saw the other night with him because he just has that type of ability.”

Wheeler will hold a 10-year reunion for its 2010 Class 2A state champions on Friday night during a non-conference game against Morgan Twp.

Nearly the entire 2009-10 team that went 27-1 and beat Park Tudor 41-38 in the state finals will be on hand at Wheeler on Friday night, including stars Andrew Rudakas and Petar Todorovic. Former coach Mike Jones and his staff will also be on hand for the halftime ceremony and postgame celebration.

“We’re extremely excited to bring this team back and honor them,” Wheeler athletic director Randy Stelter said. “Our Point Guard Club and Christie Kostbade did a great job putting this together. We reached out to them, and we expect 11 of the 12 guys back on Friday night. It will be a great night.” 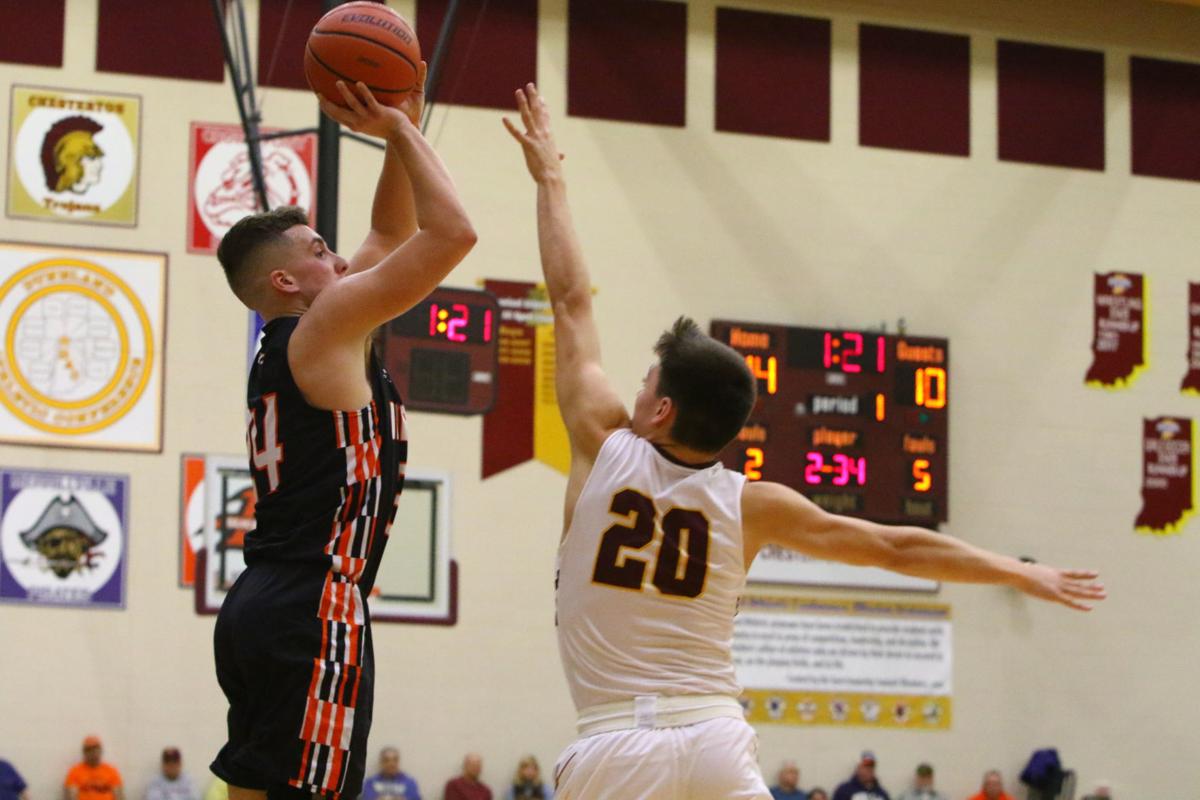 LaPorte's Garrott Ott-Large, left, scored the 1,000th point of his prep career against Valparaiso on Feb. 6. 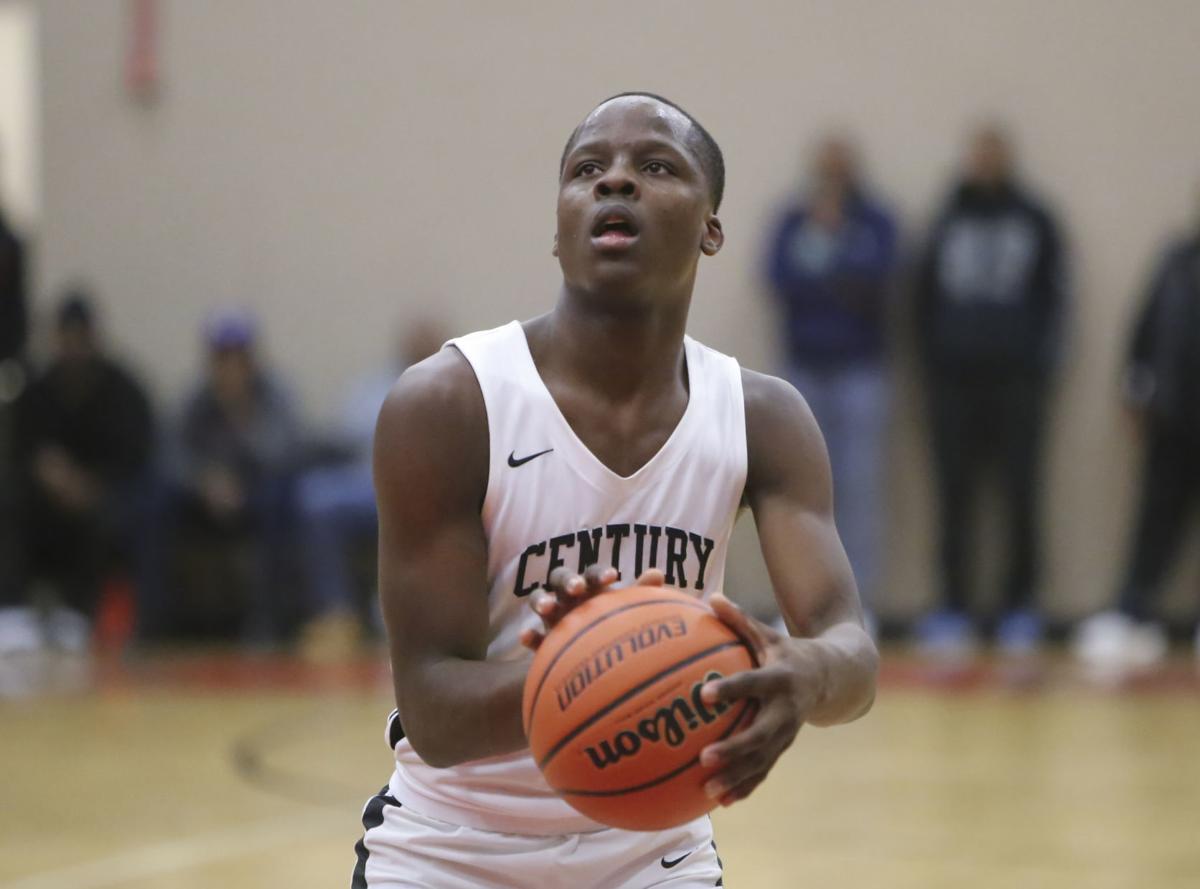 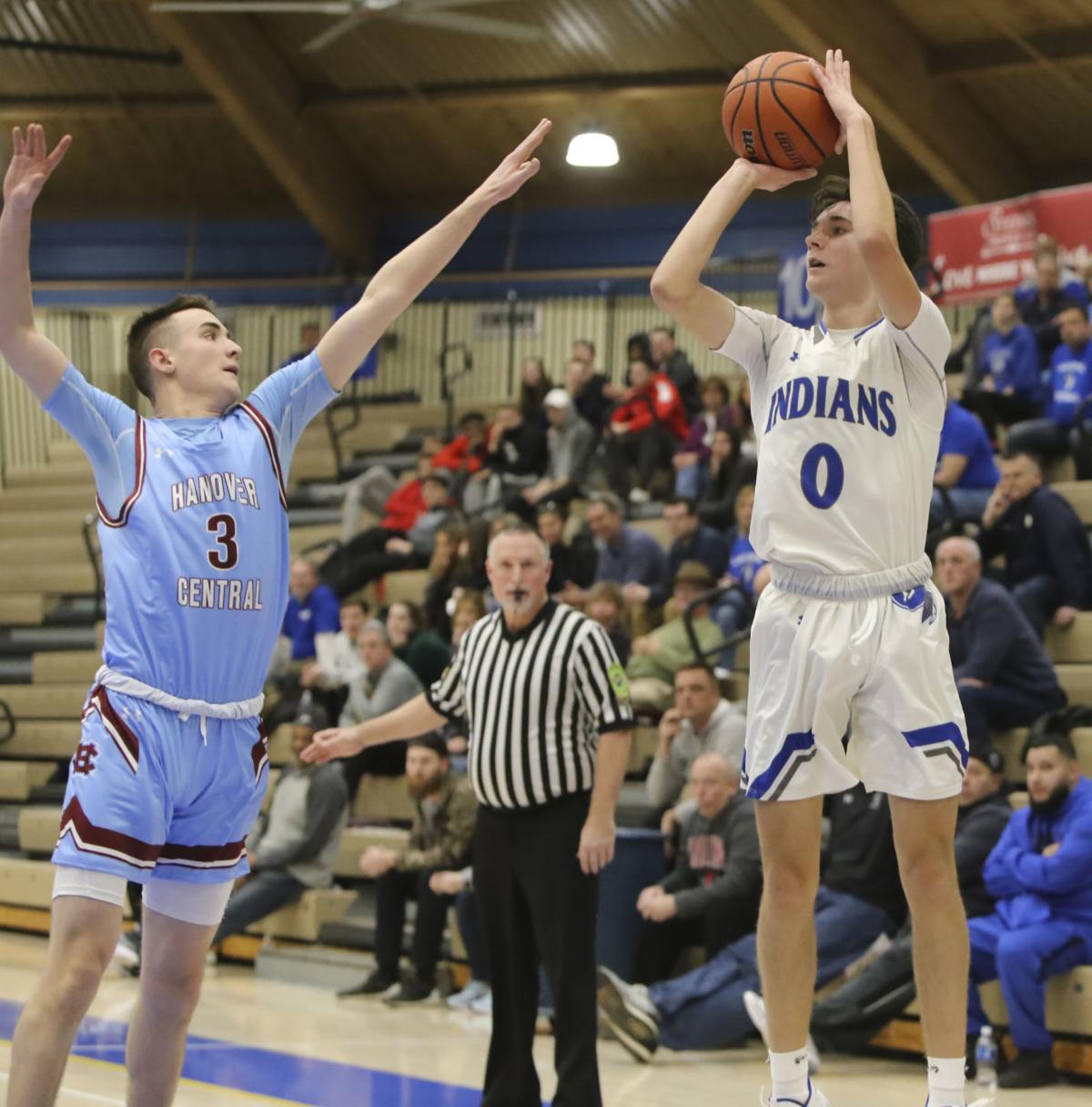 Lake Central’s Nick Anderson, right, made a school-record 11 3-pointers and scored a career-high 44 points on Tuesday against EC Central. 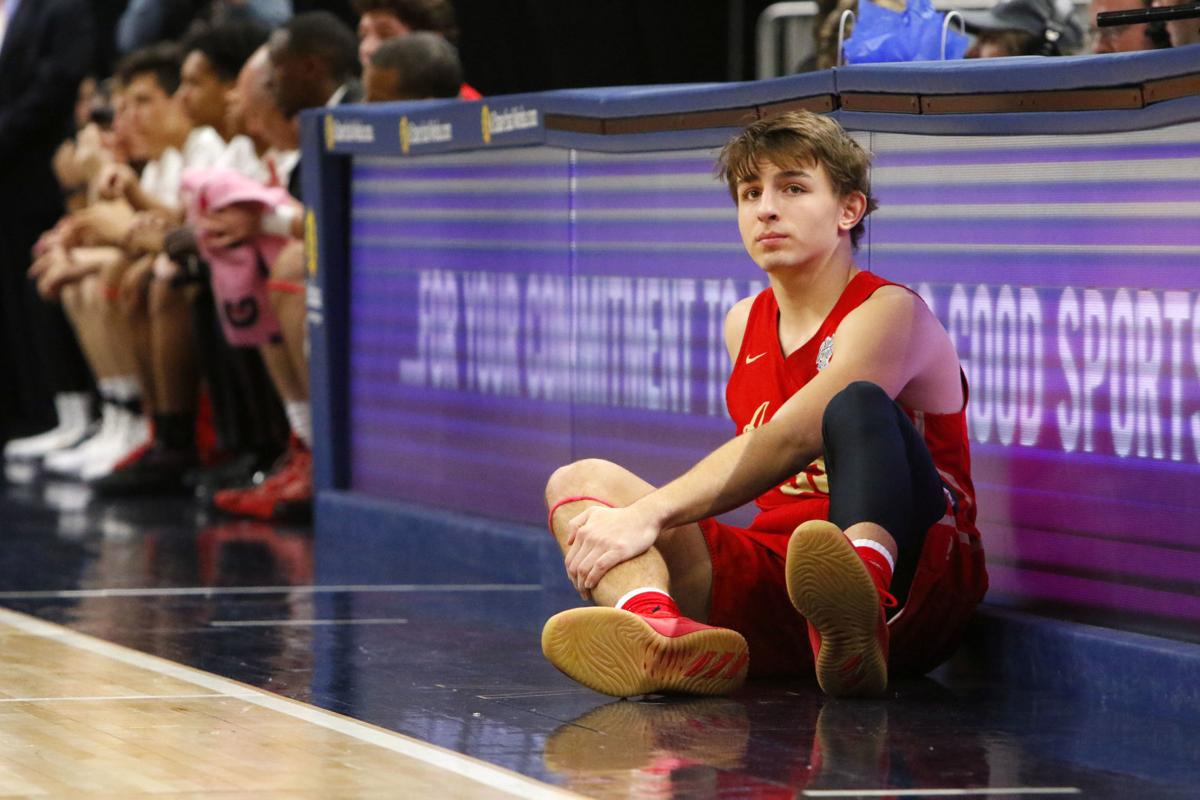 Andrean's Nicky Flesher made the game-winning layup against Blackford on Feb. 8. 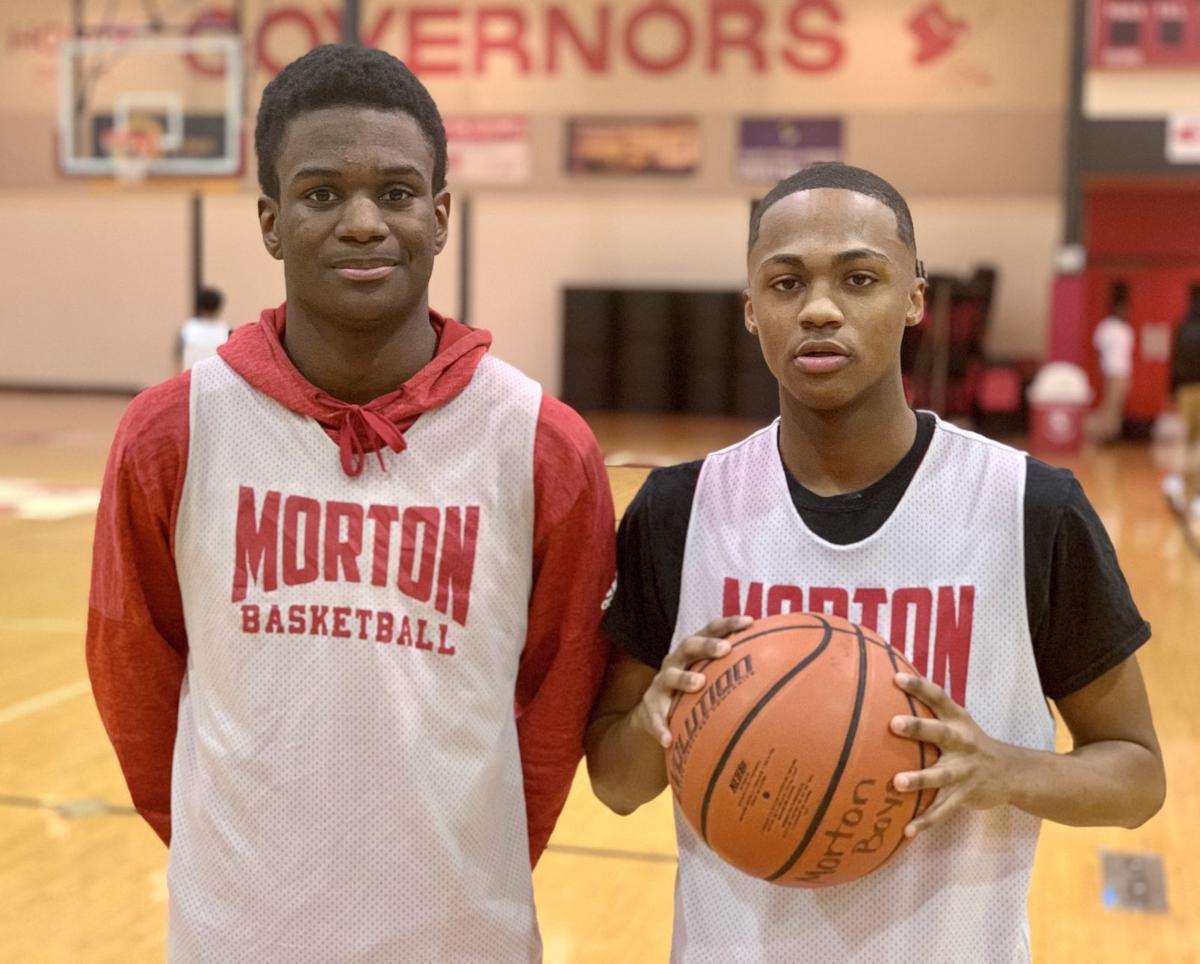 Morton's Marcus Hardy, left, scored a career-high 33 points against Whiting on Feb. 6 and gave a lot of credit to his teammate Ahmad Ferguson for feeding him the ball. 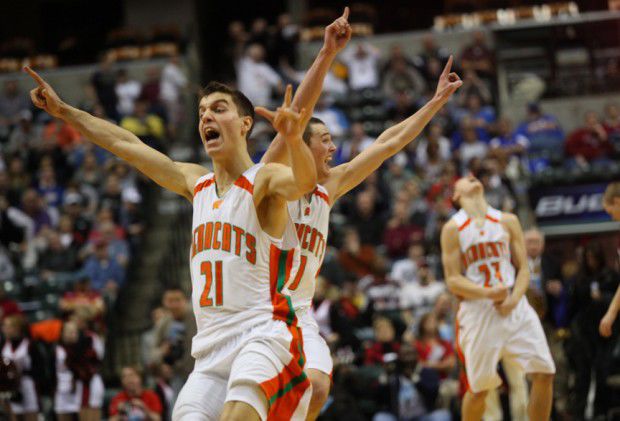 Wheeler players, from left, Petar Todorovic, Andrew Rudakas and Donnie Ketchum react on the court after beating Park Tudor 41-38 on March 27, 2010, in the IHSAA 2A State Championship at Conseco Fieldhouse in Indianapolis. The former title-winning team will be honored Friday at halftime of the Bearcats' home game against Morgan Twp.