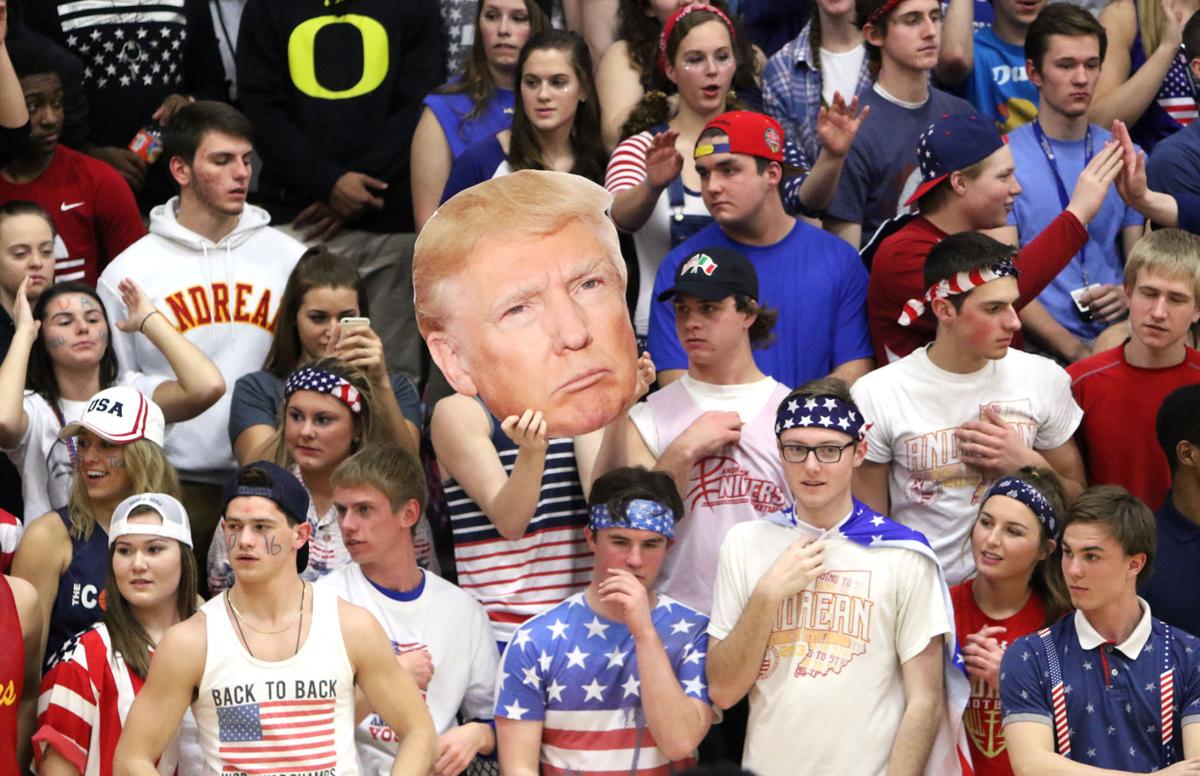 A fan in the Andrean student section holds up a large photo of Republican presidential candidate Donald Trump during a game against Bishop Noll on Friday. 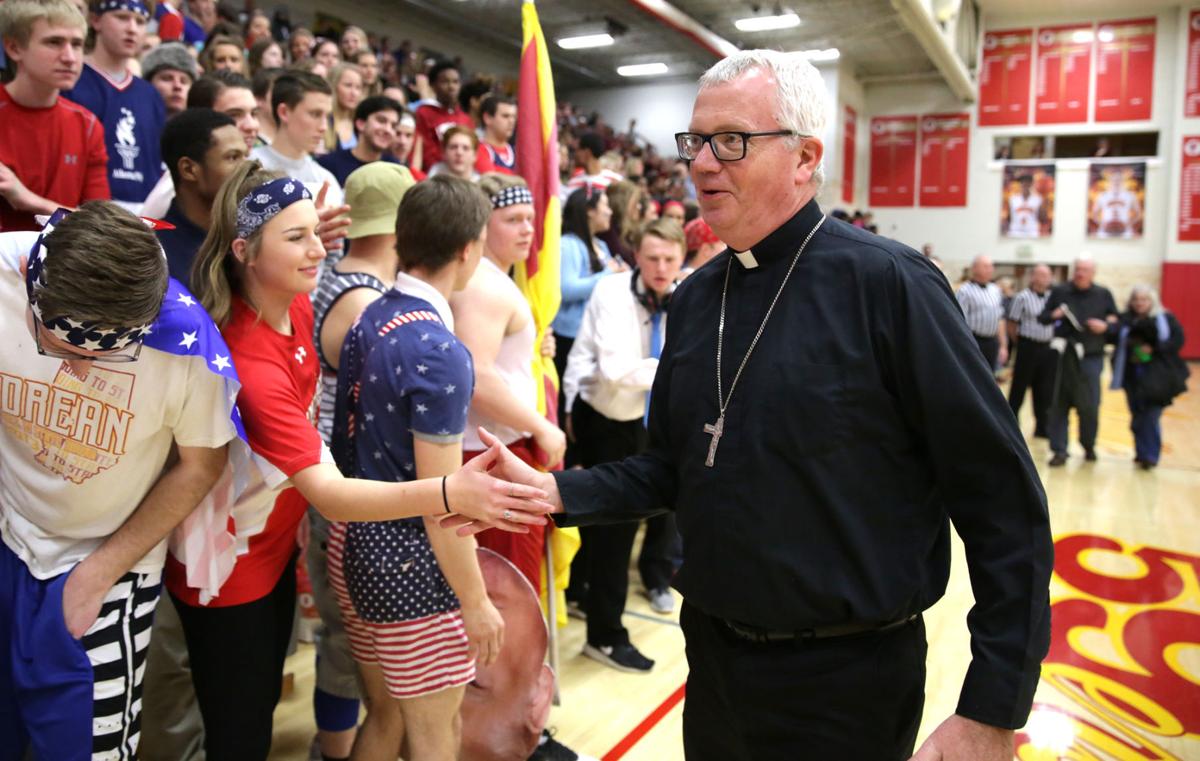 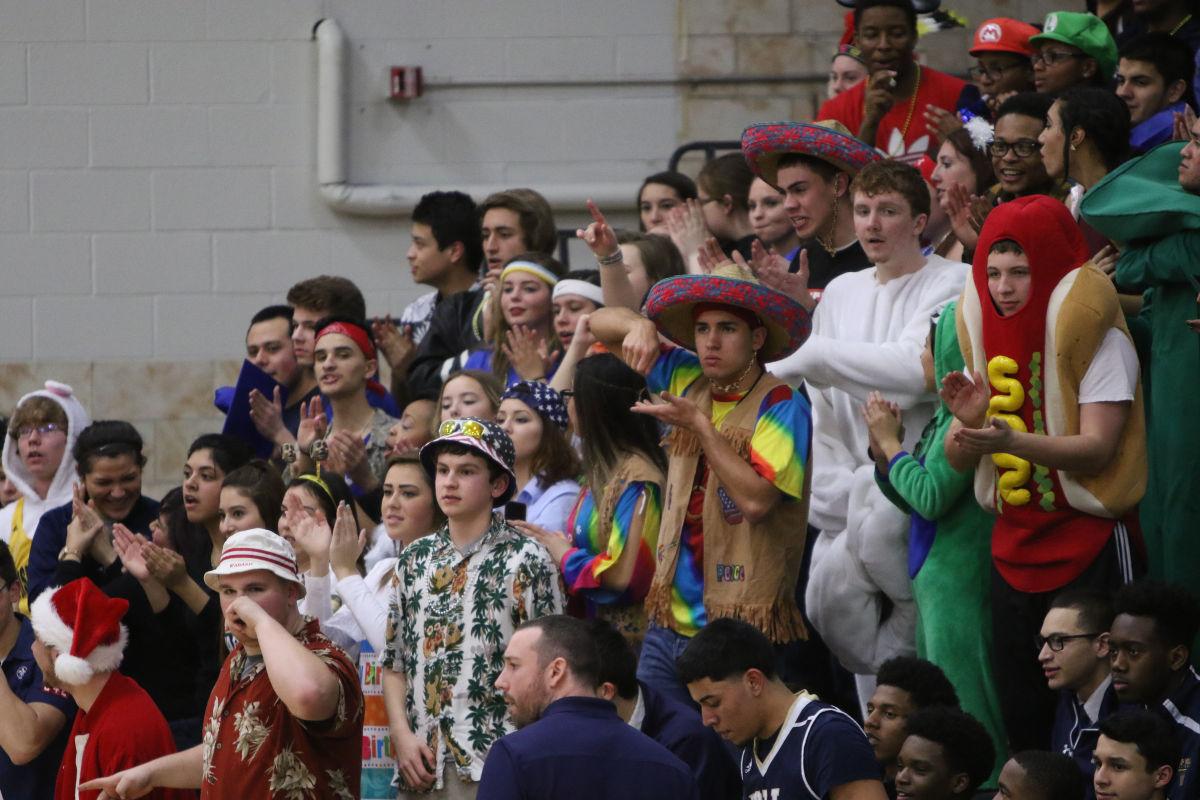 Fans in the Bishop Noll student section cheer their team during a game against Andrean on Friday.

Student sections from Andrean and Bishop Noll have created a controversy with their behavior and chants during the game between the two teams Friday.

Both student sections are known for attending games with elaborate costumes and ongoing chants.

At Friday's game, a student from Andrean brought a large photo of Republican presidential candidate Donald Trump. During the game, the Niners students began chanting to the Bishop Noll students across the gym "Build A Wall," which was followed by the Warriors students chanting "You're A Racist."

The Andrean students began pointing to the African-American students in their student section, to which the Bishop Noll students chanted "You're A Token." Some fans at the game were insulted because of Trump's views about immigration.

The exchange, particularly the Trump photo and the Noll students' response, caught fire on social media.

Ashley Howard, the Morton volleyball coach whose brother played for and graduated from Noll, posted photos of the Andrean student section on Facebook, a post that was shared more than 2,000 times as of Saturday evening.

Howard also wrote: "And due to the outrageous and racist remarks made in the media by Donald Trump the sign is extremely offensive (as it is meant to be). I ask you..... What kind of administration allows its students to support HATE SPEECH and RACISM openly at a school sponsored event......." (sic)

"I put it on Facebook, where I have just a couple of close friends, and I didn't know if it would catch on, but I'm happy that it has," Howard said. "If these were my (volleyball) girls, this would not fly at all. Just to see the administration not doing anything about it was disturbing. I'm glad it has caught on because it is forcing people to talk about it."

Andrean officials did not respond to calls Saturday night.

Paul Mullaney, president of Bishop Noll Institute, said "We are dealing with it internally," and declined further comment.

Coaches from both teams said after the game that they enjoyed the rivalry atmosphere.

Howard said neither prior to her post nor after had she spoken with administration from either school.

"I have gotten some notes in my in box on Facebook from people asking me questions; why do I have a problem with this?" Howard said. "People from all different races, from parents to students, and it doesn't seem like the kids had a problem with this. It's sad to me that they don't know to be offended, and they're happy to sweep this kind of behavior under the rug."

The extent of Carson Wentz's injury

WASHINGTON — Marco Rubio released summaries of his last five years of tax filings on Saturday, revealing him to be a candidate with a senator'…

A year ago, the conversation before the boys basketball sectional was about sportsmanship on the court.

Andrean responds to concerns about fans in letter to parents

MERRILLVILLE — The Diocese of Gary and Bishop Donald J. Hying on Monday issued a statement concerning controversial behavior by some of the st…

MERRILLVILLE — The Gary Diocese Catholic Cup already has Marquette Catholic's name on it.

MERRILLVILLE — Driving up Broadway on Friday night, my phone was buzzing early. The refrain was the same from multiple sources. It didn’t, how…

A fan in the Andrean student section holds up a large photo of Republican presidential candidate Donald Trump during a game against Bishop Noll on Friday.

Fans in the Bishop Noll student section cheer their team during a game against Andrean on Friday.