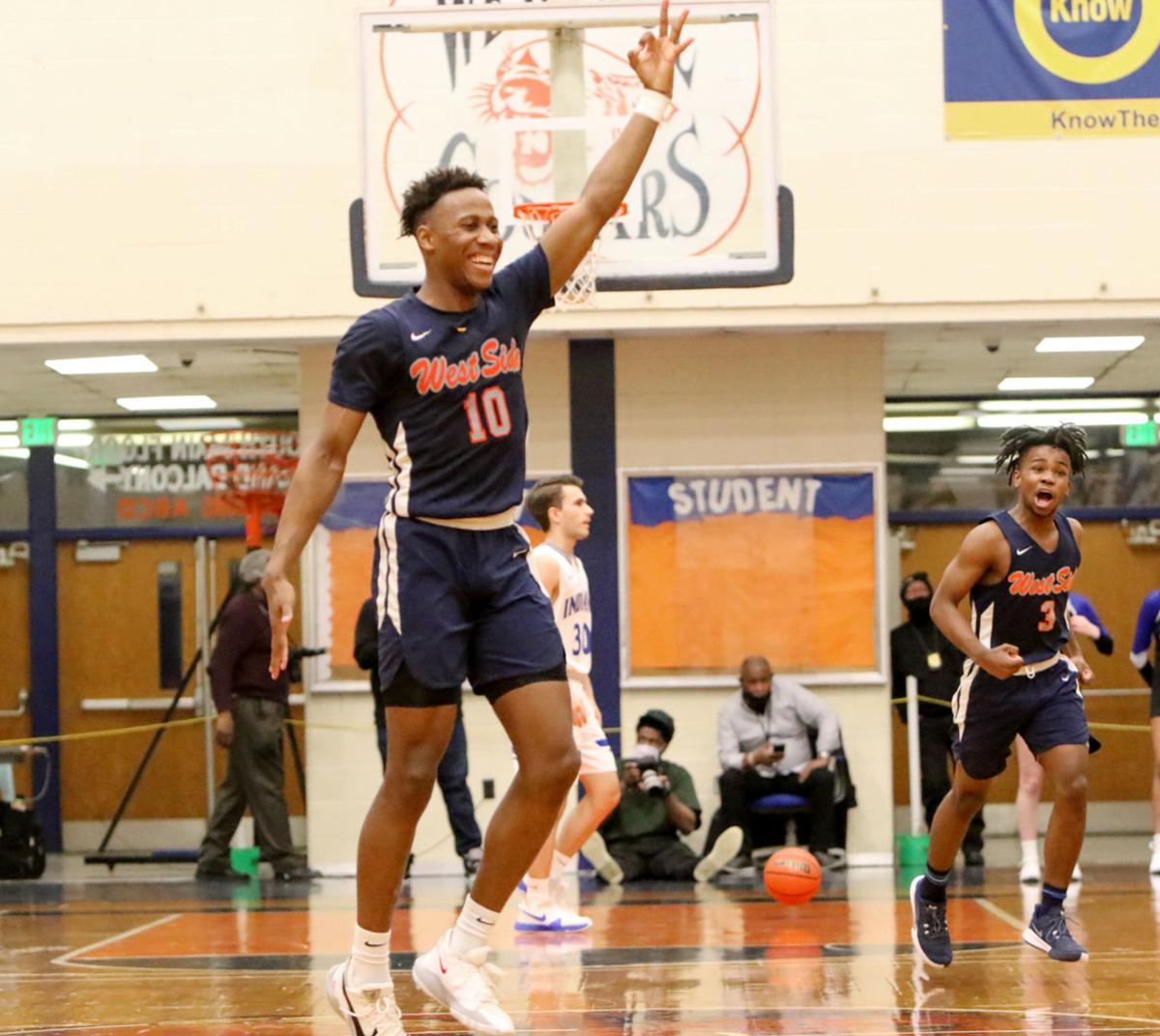 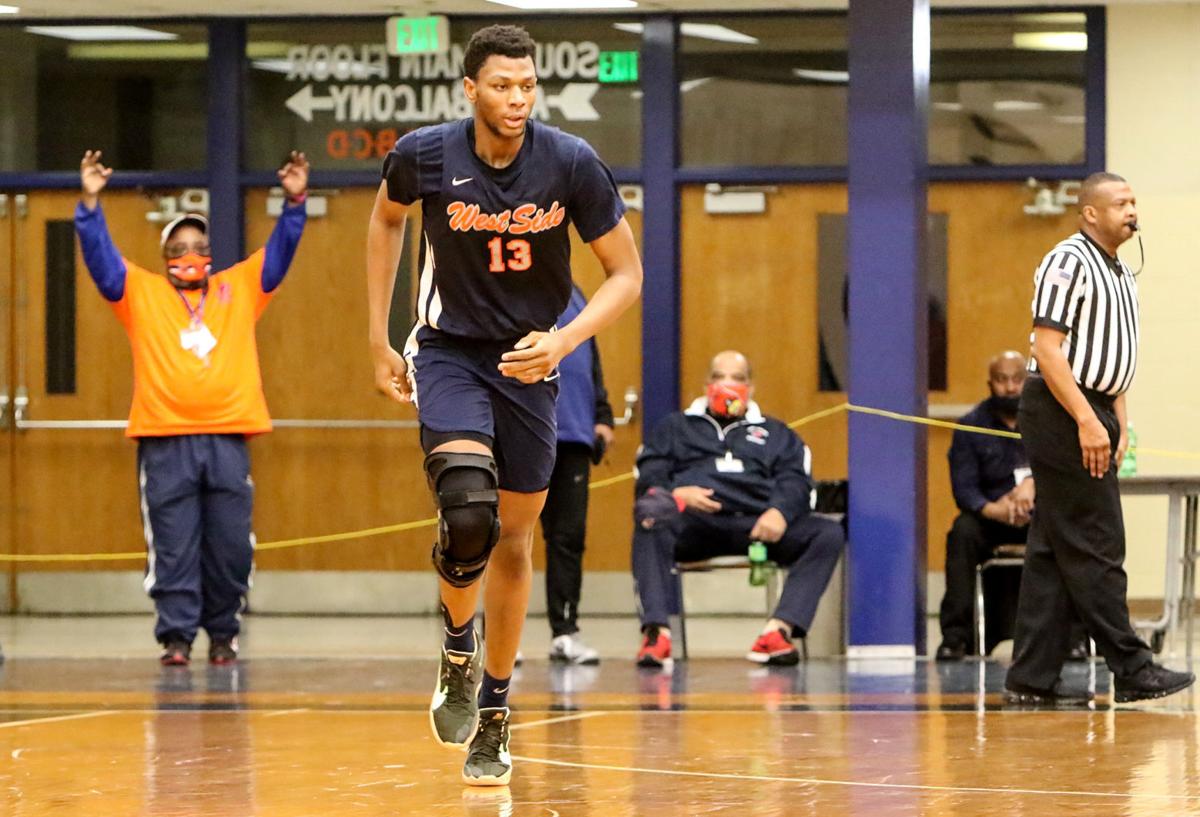 West Side’s Jalen Washington after scoring against Lake Central in Class 4A West Side Sectional semifinal Friday at West Side.

GARY — No point in wondering any longer just how formidable West Side’s basketball team might look once at full strength.

The Cougars are all healthy and the scoreboard throughout Friday night’s 4A Sectional 1 mismatch against visiting Lake Central supplied the emphatic answer to the how-good question: West Side 58, Lake Central 29.

The Cougars (19-4) put the pedal to the metal from the moment they came out of their locker room and didn’t let up for the entire first half.

West Side was too fast, too skilled, too big and too together for Lake Central (17-8) to make a game of it.

“Coach (Chris) Buggs deserves every win they get,” said Lake Central coach Dave Milausnic, whose team eliminated the Cougars in the Sectionals a year ago. “He’s put a lot of hard work into this program. I remember when they were struggling to find wins here. For him to build what he has, they play the game the right way. They have great sportsmanship. There’s not a chink in the armor. They can shoot. They can dribble. They can hit the post. They can play slow. They can play fast.”

Defending in the half court with relentless pressure, West Side kept the ball out of the hands of senior Division I prospect Kyle Ross, a 6-foot-7 skilled scorer from the paint and from beyond the 3-point semi-circle.

Chrishawn Christmas, with timely help from teammates, defended Ross for much of the first half and limited him to two first-half points on his way to a team-high eight.

Buggs was especially pleased with the way his team defended.

“He’s a really talented player,” Buggs said of Ross. “We knew coming in he was going to be aggressive. He’s been playing really well the last few games. We knew he was the heart and soul of their team and we tried to do the best we could to play defense on him. ... We talk about defense about 80% of the time, really concentrate on getting our guys to guard, and playing defense is about being together, playing on a string, helping each other out, talking, communicating. Sometimes your shot’s not falling, but you can always play defense with good effort.”

Buggs said “together” is “our mantra, our theme word for the sectionals.”

The Cougars backed up that talk intensely from the start.

Quimari Peterson (12 points), Paris Roberson and Billy Muldrew made it tough on Lake Central’s guards and the Cougars forced 13 first-half turnovers, most of them sending the Cougars off to the races for transition buckets.

West Side’s advantage was every bit as pronounced in the frontcourt.

The Cougars alternated 6-9 centers with playing styles as different as their body types. Jalen Washington, a slender junior with a pillow-soft shooting touch, and Mason Nicholson, a wide-body senior who knows how to post and make short bank shots all night.

Washington, who played sparingly in the second half, contributed a 3-pointer and a dunk on his way to 11 points. Nicholson punished the rim once with a dunk en route to 12 points, sharing teams scoring honors with Peterson.

Sidelined six weeks by an ankle injury, Nicholson said he is “fully healed” and “ready to play some more basketball.”

Washington and Nicholson won’t face anything in the way of a big-man challenge in a game that they don’t face daily in practice, now that Nicholson is back.

“We go hard on each other,” Nicholson said. “I push him. It’s basically a teach and teach. He teaches me some (basketball) IQ and I teach him how to be tough in the paint.”

Buggs knows the Cougars will face a tougher challenge vs. Munster in the 6 p.m. tipoff for the sectional title at West Side.

“Munster’s a great team,” Buggs said. “They live by a lot of senior, well-coached. I think it’s going to be a challenge for us to win, but if we play our best, I think we can have a good chance to win.”

Munster 72, Morton 38: Senior Luka Balac sat out the final 90 seconds of the third quarter and all of the fourth to rest up for the sectional final and still scored a game-high 21 points to lead the Mustangs (17-5) past the Governors (10-15).

Balac supplied the highlight of the night. Racing in from the left wing, Balac took the basketball behind his head with both hands and threw down a dunk. The next time down, teammate Jeremiah Lovett skied even higher and reached back for a one-handed dunk, but the ball popped out.

Dane Hamilton and Tyler Reyna joined Balac in double figures with 10 points apiece, all of Reyna’s points coming in the fourth quarter.

Showing outrageously deep shooting range from near the left out-of-bounds line, Kenneth Mingo swished a trio of 3-pointers in the fourth quarter to lead Morton with nine points. Miguel Burns added eight points for the Governors.

Basketball Recap: Catch up on all of last night's excitement here!

“He told me hell of a game, just said good game, keep your head up,” Christmas said. “I feel like he knew I was a senior. At the end of the day, I thought it was a good play, but it’s just basketball.”

West Side’s Jalen Washington after scoring against Lake Central in Class 4A West Side Sectional semifinal Friday at West Side.