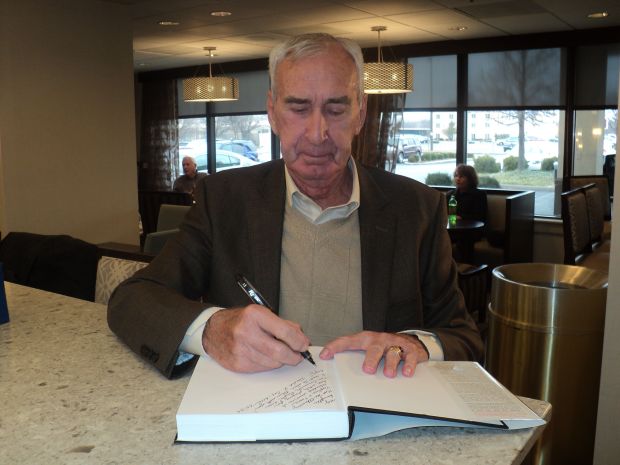 Harold Cox can't wait to return to Portage in August.

The former Portage boys basketball coach is excited about coming up for a faculty reunion at Woodland Park. He also expects to meet his former players. He said he got together in Indianapolis with former Portage and Valparaiso University great Bruce Lindner.

Cox is anxious to visit the "new" Portage High School on U.S. 6 and Airport Road. The "new" school opened in 1979. When Cox was the Indians coach from 1961-68, the high school was at Willowcreek Road and Central Ave. It was the new high school. That building is now Willowcreek Middle School.

"People have told me how much Portage has grown and I am really anxious to not only see the town, but to see old friends," Cox said. "It was growing then. When I came there in 1961, we had 900 students. When I left in 1968, there were over 1,800 kids. They were knocking out walls and adding space."

He left to return to his hometown of Kokomo and become the first boys basketball coach at the new Haworth High School.

"I couldn't pass it up, my hometown and everything," Cox said.

Cox still teaches driver's education at age 76 in Fishers. At Portage, he was 75-75 and his best team was in 1965-66 when the Indians finished second in the Calumet Conference to Calumet.

"We lost by one point, 77-76 to decide the championship," Cox said. "I had a good group and a good assistant in Larry Casbon. He really put in a lot of time."

Lindner said it was enjoyable to see Cox go out and show his skills. Cox was a Little All-America at Evansville under Arad McCutcheon. He was a starting guard on the Aces 1959 NCAA Division II national championship team.

He also remembers learning the game from the All-American.

"Harold was a great teacher, both him and Larry Casbon," Lindner said. "He worked us pretty hard, but he also made the game fun."

Cox was a high jumper and a long jumper, as well as a pole vaulter at Kokomo and Evansville. He was also mentioned in the book "Trophies and and Tears,'' which is a story of University of Evansville basketball and written by Kyle Keiderling.

"I figured we had an abundance of good basketball players at Kokomo, so I had to make myself better," Cox said. "I figured track, those events, would make me a better jumper."

He said he prided himself on his Indian teams and all his teams being good at the free-throw line.

"We were never as good as Valpo with Virgil Sweet, but we were up there," Cox said. "Virgil had his players bring the ball just under their chins and shoot. I had our guys bring it over their heads so it was like we were shooting jump shots."

After coaching, he worked in sales at the beginning of the cellphone surge in the 1980s.

"I figured I got in on three big things — Evansville basketball — I was there when they opened Roberts Stadium, getting in at the start of Portage, and the cellphone craze.

"I guess I've been pretty lucky in my life."

He is a 1954 graduate of Kokomo High School. he left Portage to become the head boys basketball coach at the then-new Kokomo Haworth High School.

Cox played for Arad McCutcheon at the University of Evansville and was a starting guard on the Aces 1959 NCAA Division II national championship team.

Cox has three children, five grandchildren, one great-grandchild with another on the way.

He has a son Michael (Kelley), and daughters Kimer (Nyle) McElhinney, and Julie (Randy) Ruddinger.