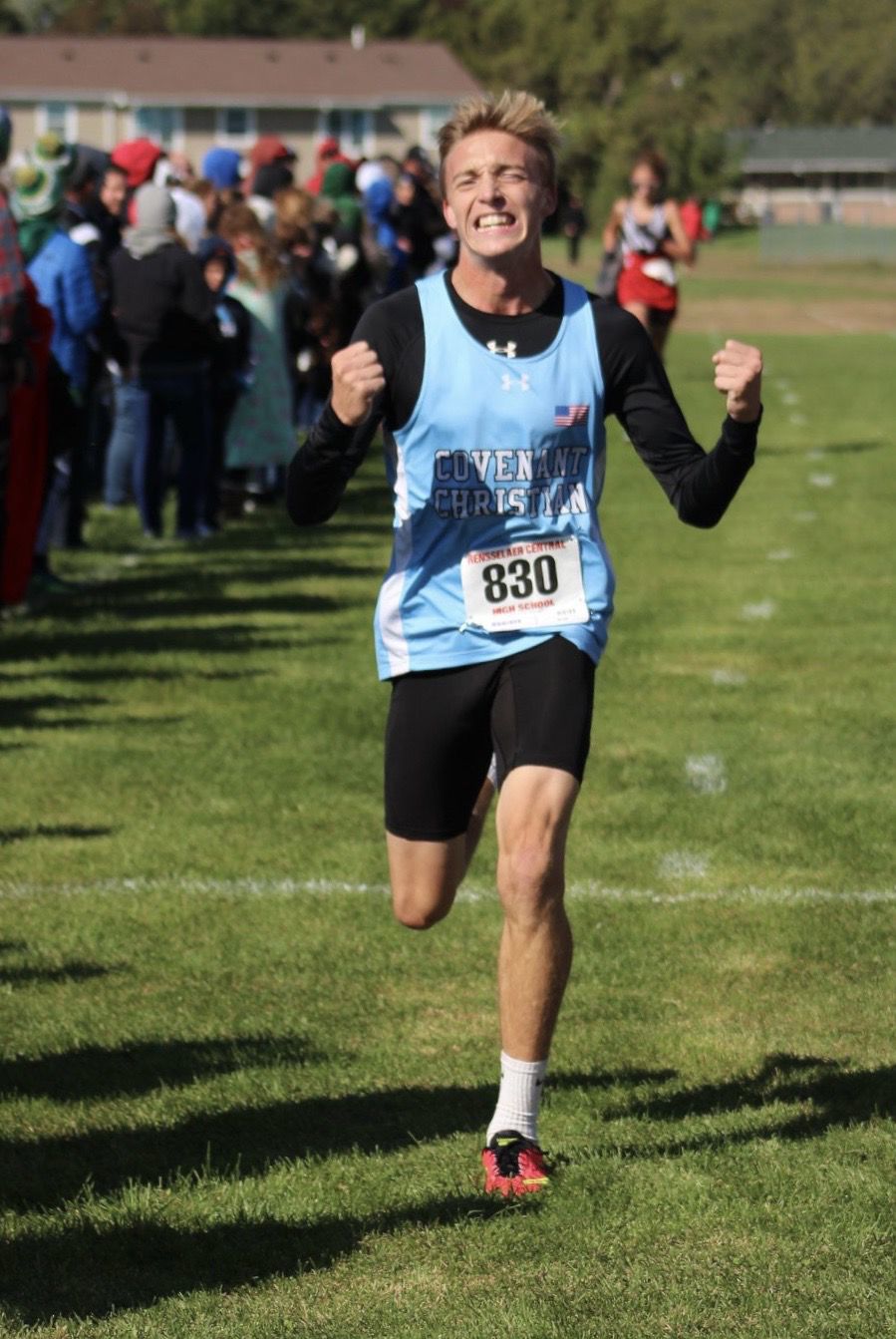 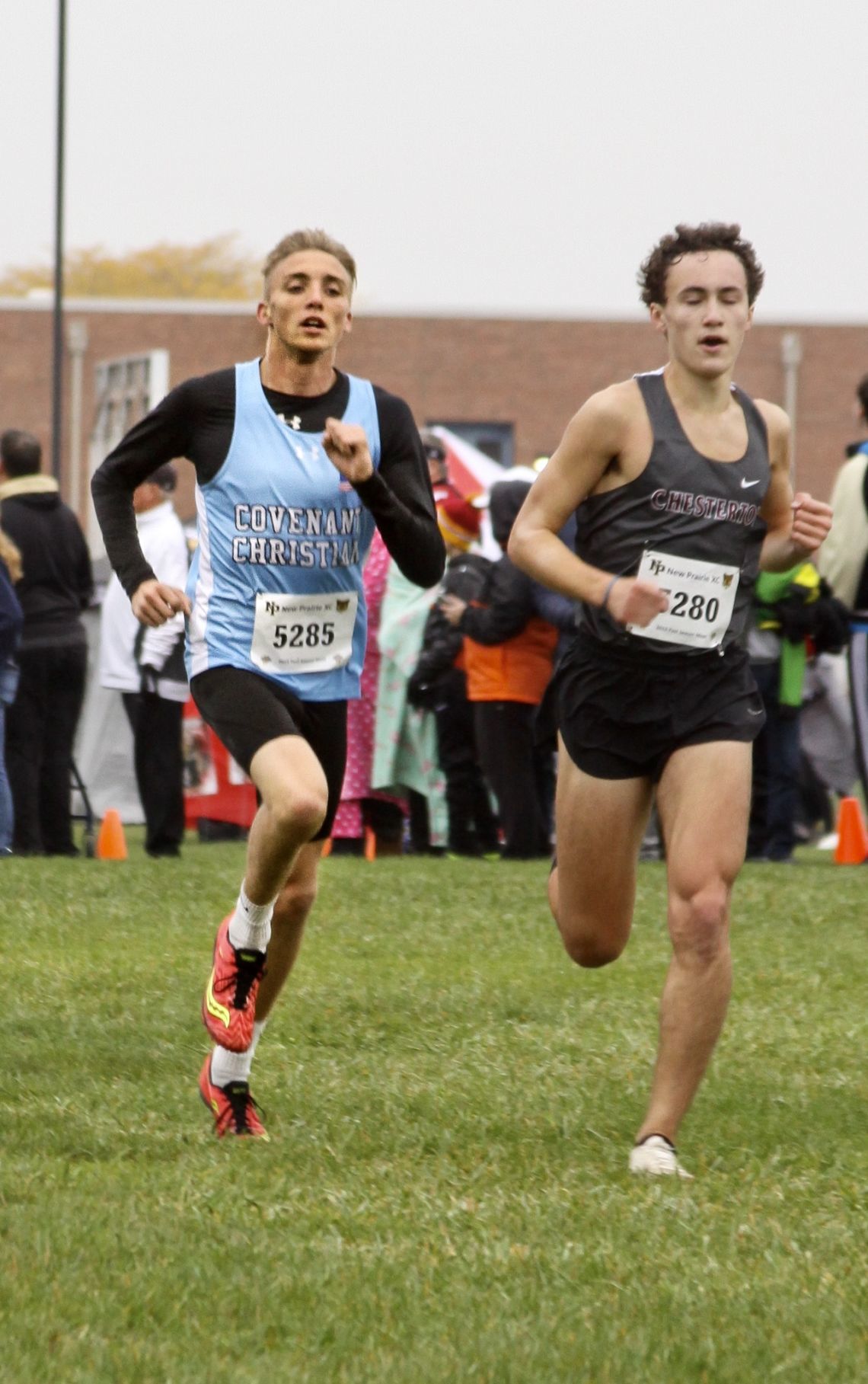 Covenant Christian senior Kohler Peterson, left, started running when he was a sophomore. Saturday, he will compete in the cross country state finals.

In fact, the Covenant Christian senior couldn’t even picture himself as a runner when he started high school. After transferring from Kankakee Valley following his freshman year, he only joined cross country at the request of his father.

“It was actually pretty funny. My dad called the school and asked, ‘Do you all have a cross country program?’” Peterson said with a laugh. “The first year my dad said I should just run, and if I didn’t like it, I could quit. So I kind of had that mindset.”

But since Peterson began running, he hasn’t stopped.

Instead, he’s become not only one of the top runners in the Region but the entire state. The senior finished 15th at the New Prairie Semistate meet on Saturday with a time of 16 minutes, 31.2 seconds and became just the second cross country runner (boys or girls) in school history to earn a trip to Terre Haute. He joins former Knight Carson Bakker, who advanced last year.

“I was telling my dad after the race, ‘Holy cow! I just raced New Prairie for the last time in my high school career. I’ll never run here competitively again,’” said Peterson, who finished his first 5K in 19:26 as a sophomore. “I guess that's just when it set in emotionally. I’ve ran there seven times, and now, I’m realizing that my last time racing there was my ticket to state.

“It’s just super crazy to think of where I came from three years ago until now.”

Covenant Christian assistant coach Jay Starkey has been at the school for six years and witnessed firsthand the work Peterson put in to get to this point. Unlike his peers, running wasn’t always Peterson’s passion, and Starkey said he wasn’t as physically gifted as his counterparts either.

It ultimately came down to diligence and obedience, both traits that Starkey believes has helped Peterson emerge as a premiere runner. At the beginning of Peterson’s career, Starkey didn’t envision him running at LaVern Gibson or having an invaluable impact on the program.

However, the newcomer fully dedicated himself to the sport, and his commitment has culminated with an opportunity to race on the final Saturday of the season.

“Some kids come in come in with a lot talent and take off right away,” Starkey said. “He kind of just slowly kept developing and listening. He ran in the winter time and did everything we said. Now, here we are.

“It’s his senior year, and he’s accomplished what he probably didn’t think was possible.”

When Peterson lines up to race in Terre Haute, he said he'll take a lot of pride in being the lone state-qualifier from Covenant Christian. The school only has roughly 100 students, and unlike other sports, cross country doesn’t have a class divider.

All programs run together, no matter the size, which makes it even tougher for an individual from a small school to reach state.

"It's incredible because our school is probably the smallest school that'll be participating at the state level," Peterson said. "Just being able to say that smaller size schools can get to this level is almost like saying, 'It's not impossible for a small school to do big things.'"

Regardless of his teammates not being out there with him, Knights coach Travis Conley is confident that Peterson will hold his own against the other standout runners. He has reminded and encouraged the senior all year that he would have a shot at bringing home some hardware, and as the last race approaches, Conley has even taken it a step further.

Earlier this year, Peterson became the first cross country runner in school history to win a sectional championship. He finished first at Rensselaer Central in 16:40.4.

Bakker still holds the school record in the 5K at 16:23, while Peterson has crept closer and closer with a personal best of 16:31 (recorded at the New Prairie Semistate). Eyeing a chance to displace his friend and former teammate, Conley wants Peterson to have faith in himself and leave his mark.

“My last message to him is that we’re not done yet,” Conley said. “We have one more meet to finish out his amazing three-year career. I couldn’t be any more proud of him. Saturday isn’t just the state meet. It’s another meet to hopefully break the school record and get all-state. That’s our goal.”

Greiner does it all, becomes Andrean's first cross country state qualifier since 2011

Andrean's Lilli Greiner finished 12th at the New Prairie Semistate meet to earn a trip to state. The senior is also a four-sport athlete for the 59ers.

Covenant Christian senior Kohler Peterson, left, started running when he was a sophomore. Saturday, he will compete in the cross country state finals.