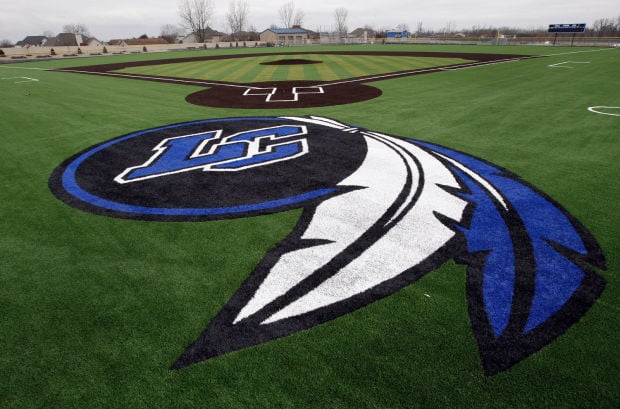 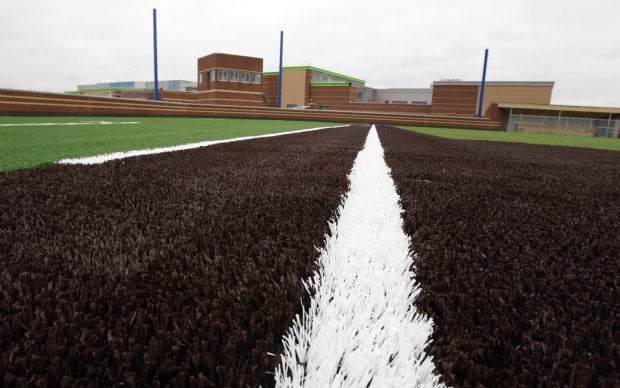 The view towards home plate on the first-base foul line shows Lake Central High School in the background. The Indians' baseball and softball fields have newly installed turf, making L.C. the first high school in the area to have turf fields. 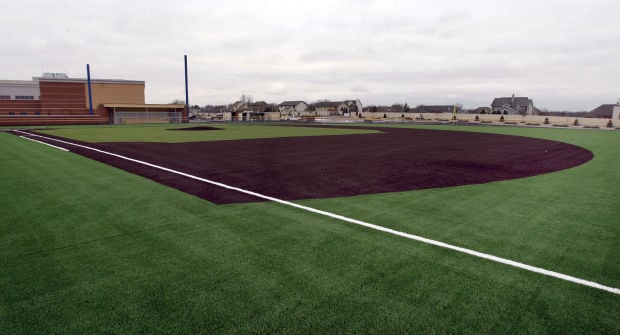 The dimensions of Lake Central's new FieldTurf baseball field are 400 to center and 325 along the right and left field lines.

The view towards home plate on the first-base foul line shows Lake Central High School in the background. The Indians' baseball and softball fields have newly installed turf, making L.C. the first high school in the area to have turf fields.

The dimensions of Lake Central's new FieldTurf baseball field are 400 to center and 325 along the right and left field lines.

ST. JOHN | In the five days leading up to the semistate baseball championship, it rained three of them.

It didn't just rain, it poured.

The Lake Central Indians spent most of their practices prior to playing against Noblesville shoveling a drying agent onto the infield and pushing water through the outfield in order to take fielding practice.

The Indians notched four errors in the semistate finals and lost by a run.

"I'm never going to blame the kids and say that that hurt us, but at that time of year it's so important to stay sharp and practicing three days inside isn't the same," L.C. baseball coach Jeff Sandor said.

The baseball field lay at the bottom of a hill, with the softball field and junior varsity baseball field emptying rain onto the first-base line of the varsity field. Thanks in part to last winter's cold and snow, it was litter during the 2014 season with dirt pockets, holes and patches that could catch a foot or a ball and turn it one way or another.

"It was rough, and there were spots that always had bad hops," senior Alex Nisle said. "I think the biggest thing is that every time it rained, we had to do field maintenance and we were not able to practice the whole time the day before a game, because we had to get the field ready."

Now the Indians are staring out at something no other team in the region has at its disposal: full turf.

As part of the 2011 referendum that reconstructed the high school and will rotate the football field, the baseball diamond and softball field have been blanketed in FieldTurf.

Lake Central is the second school in the state to boast a turf baseball field, behind only Indianapolis Chatard.

"In the conversations, if it comes up, what other athletic departments are telling me is that if we ever redo our field, that's the only way to do it," L.C. athletic director Tony Bartolomeo said. "In football, it started as a luxury, as a neat thing and then it became the norm. In baseball, this gives L.C. a chance to be the leader and on the cutting edge instead of us following. In football, we'll be the last team in the DAC to have a tuf field, but in baseball and softball, we'll be the first in the area, and we're happy about that."

The Indians will save money on what could seemingly be incidentals: line chalk, Diamond Dry and gas for the lawn mower. Yet, when the team was using pallet after pallet of the drying agent on the field day after day, the savings add into the thousands for a single year.

"There were days where we'd use 20 bags of Diamond Dry just to practice," Sandor said. "Now, even in the winter, the kids can get out there and take fly balls, they can take ground balls, the things you can't simulate in the gym. If it's warm enough to be outside, we can be on that field."

Many players have used turf fields during their summer ball games. Without pitches and pockets where Mother Nature has left a mark, the ball bounces differently.

"It plays a lot quicker, a lot faster and it's really nice," said Jorey Dimopoulos, who said he's played on turf fields during his summer ball days. "There are never bad hops and it's easier to judge where the ball is going to go. It's a lot smoother in every way."

The mound at the Indians' new field will also be made of turf, adding a different feel for most pitchers.

"I like that the footing will be better," said pitcher Bryan Vanderlee, "you're not going to get the holes and every time you go out there it will be like it's brand new. We will get to be the first team that gets to get used to it."

The turf was installed over a three-week period that included the laying of a drainage system that Sandor said could hold up to 5 1/2 inches of rain per hour.

The players aren't allowed to chew sunflower seeds, gum or drop any additional debris on the turf. Shoes can't have dirt on the cleats, because the dirt doesn't soak into the turf as it would on a regular sod field.

A decision hasn't been made yet on whether typical metal spikes will be banned from the field, Bartolomeo said, but Sandor added that he's ordered turf spikes for his players.

The greatest benefit and cost analysis went into how many games could be played after rain. The Indians administrators expect that unless there is pouring rain that could make the ball hard to grip or lightning at the time of the start, a game can go on as scheduled regardless of the weather before.

"We have something here that we're super proud of," Sandor said. "We're finally setting the bar for a facility."

ST. JOHN | Jeff Sherman sent a text out to his Lake Central softball players last spring. It said what time the Indians needed to be there and…