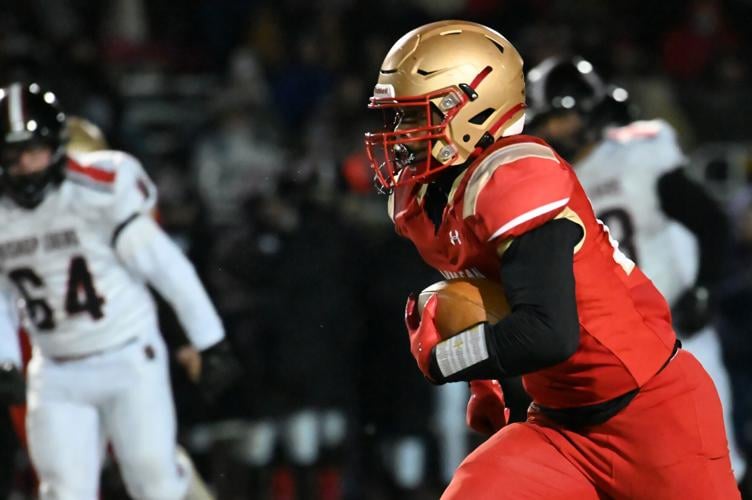 Andrean’s Antonio Barnes (20) runs an interception back for a touchdown against Fort Wayne Luers in last Friday's semistate. 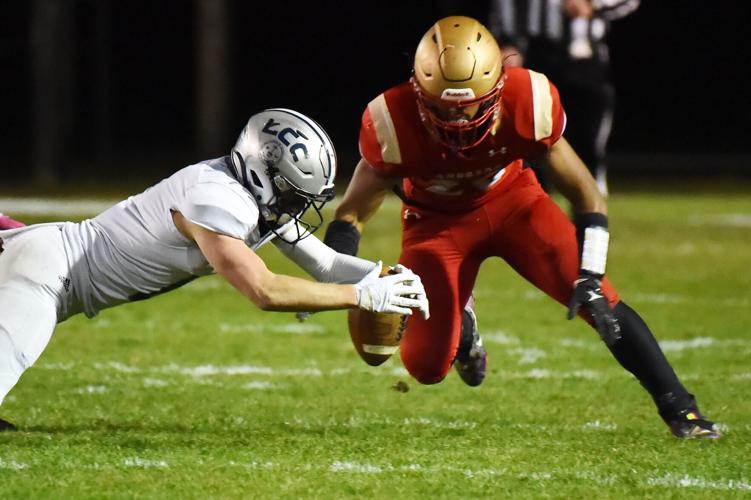 Andrean’s Antonio Barnes (20) goes after the a loose ball against Lafayette Central Catholic in the regional round this season.

The Andrean senior won his first last fall when the 59ers were the final Class 2A football team standing. He earned his second as part of the Andrean baseball team in the spring.

Barnes hopes to need to be fitted for a third after the 59ers play in Lucas Oil Stadium again Friday.

Andrean will probably need someone to make some big plays to make that dream a reality. Barnes proved he has an ability to do that this season.

In the semistate win over Bishop Luers, the 59ers offense sputtered on its first drive. Barnes came up with a 30-yard pick six on the Knights’ first possession to steal the momentum.

He read the eyes of Luers quarterback Charlie Stanski on a run-pass option play.

“I was expecting something quick, either a slant or a hitch. I saw (Stanski) look at the receiver as he pulled (the ball from the running back). I gave the receiver a little bump and just jumped the route,” he said. “It was really cold and I could barely feel my fingers. I was just focusing on trying to catch it and hold it and get to the end zone.”

Barnes came up with a big stop on a fourth down in the regional game against Lafayette Central Catholic. He intercepted a pass in the end zone in the final seconds of a 24-17 regular-season win at Hobart, too.

He said he takes pride in not shrinking during important moments.

As a whole, Andrean has a team full of players who’ve been through the wars of one state title run, already. That’s an advantage they won’t have over the next opponent, though.

Evansville Mater Dei is awaiting a rematch of the 2021 Class 2A state championship. Andrean beat the Wildcats 21-9 a year ago.

“We know each other’s teams so it’s just going to be a game of who wants it more,” Barnes said. “I know they’ve probably been fired up to play us. They’re trying to get the series tied with this state championship.”

Mater Dei has a diverse passing attack. Four different receivers have 27 or more receptions on the season and none has more than 40. Quarterback Mason Wunderlich completes 65% of his passes, totalling 2,565 yards and 25 touchdowns with eight interceptions.

It’ll be a test for Barnes and the rest of the 59ers’ secondary.

“We’re going to have to study a little more, see if there are situations where (Wunderlich) has somebody he prefers or if there are certain route concepts,” Barnes said. “He’s tall. He can see a lot. It’ll be more of a challenge.”

Barnes isn’t afraid of a challenge. He’ll play college football while studying engineering, with offers from Rose-Hulman and Carnegie Mellon.

There’s one more high school game to play, though.

“We’ve worked really hard for ourselves. I think we really deserve this,” Barnes said. “We just have to come out ready to play Friday and practice hard all week like we have all year.”

The Times 2022 Offensive Player of the Year: There's no more doubting JJ Johnson

Detractors thought JJ Johnson was too small or couldn't throw well enough to be a DAC quarterback. They couldn't have been more wrong.

The Times 2022 Coach of the Year: Bill Marshall is a testament to trust

Sometimes, second choices have a funny way of working themselves out.

The Times 2022 Defensive Player of the Year: Drayk Bowen made his mark on Andrean

Drayk Bowen was stands out among a crowd of great Region athletes.

Andrean’s Antonio Barnes (20) runs an interception back for a touchdown against Fort Wayne Luers in last Friday's semistate.

Andrean’s Antonio Barnes (20) goes after the a loose ball against Lafayette Central Catholic in the regional round this season.