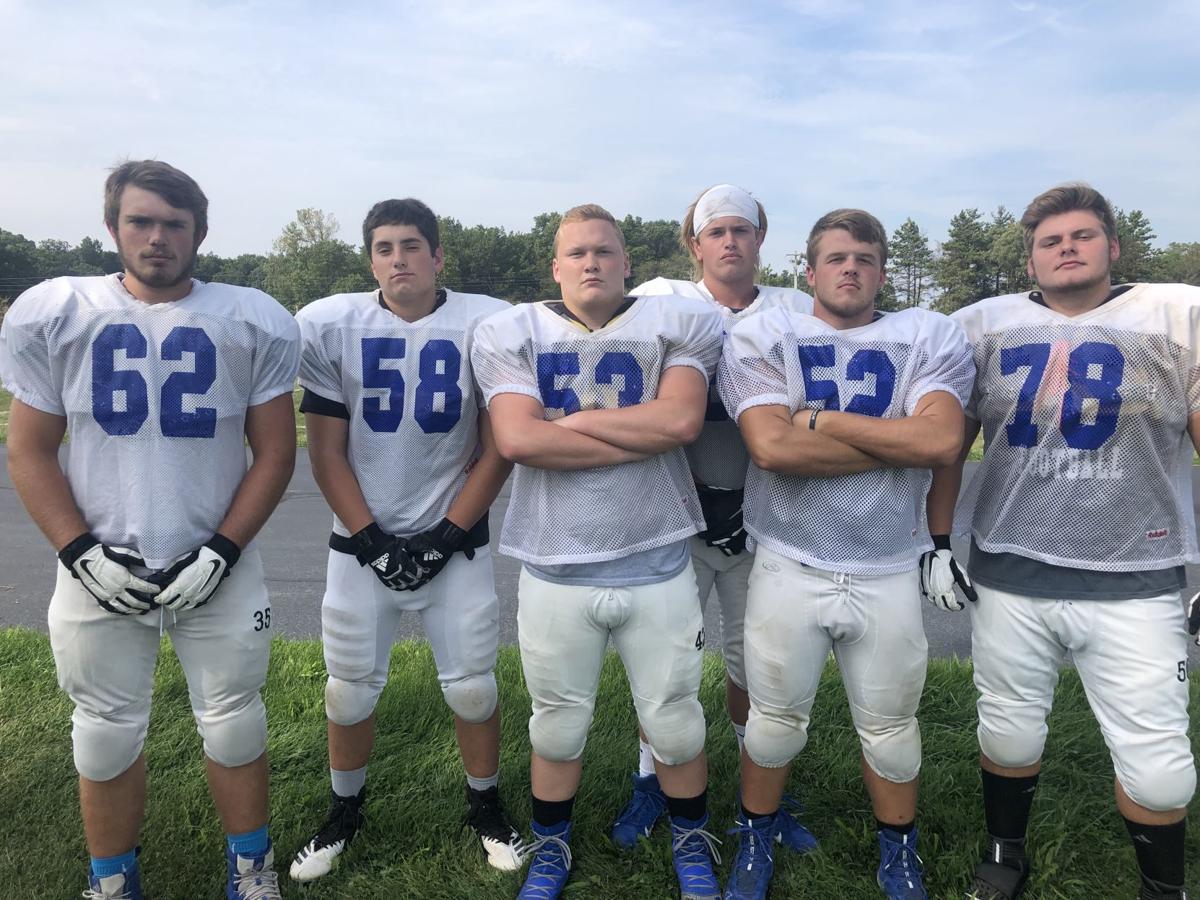 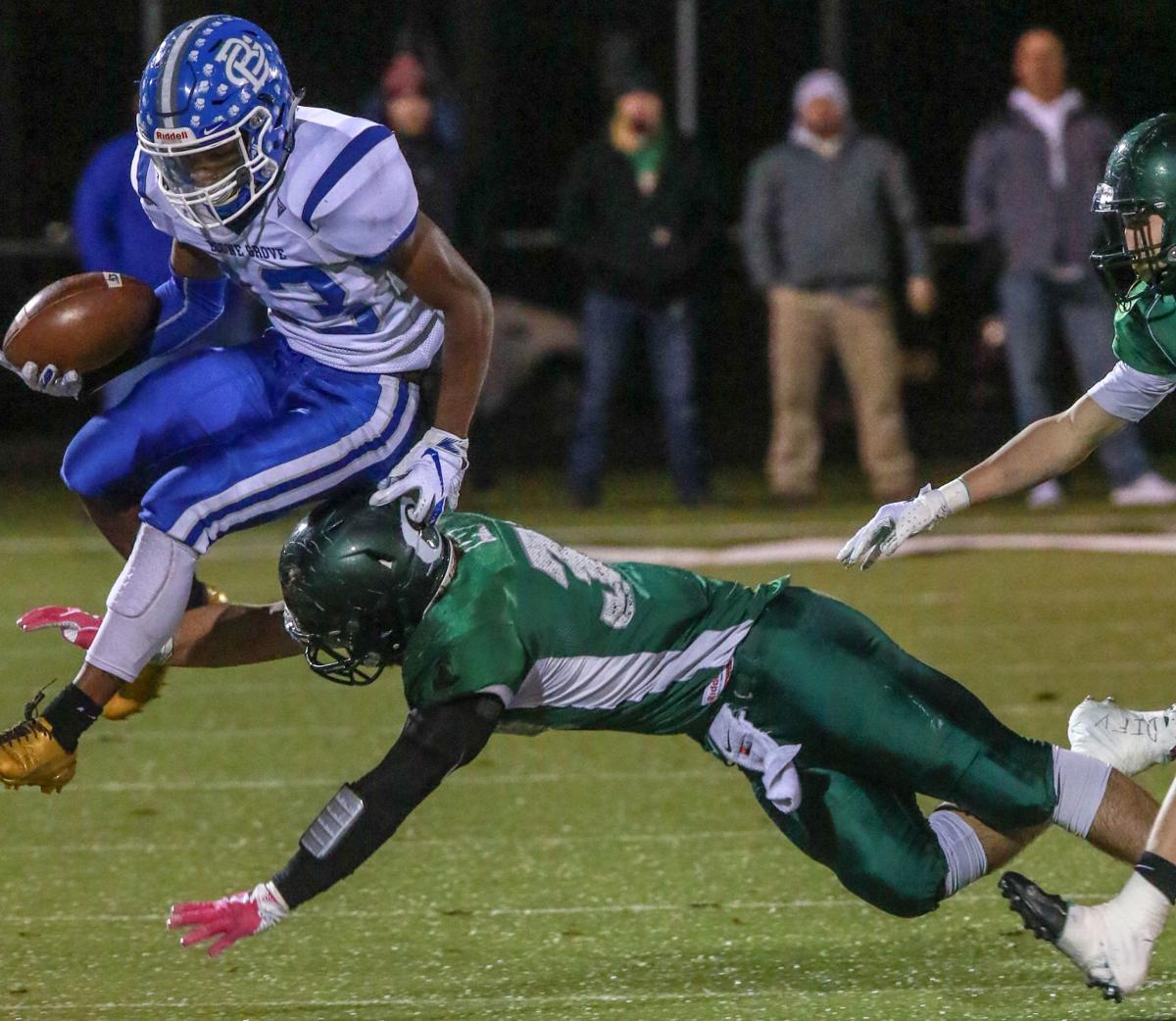 Boone Grove's Brae'ton Vann tries to get past Whiting's Tom Davenport during a game last season.

Six of Boone Grove’s most important players operate in relative obscurity, hidden in plain sight each Friday night as stars Brae’ton Vann and Jake Mayersky run all over the opposition.

The Wolves have rushed for 15 touchdowns and nearly 1,000 yards behind an experienced offensive line in the first three games of the season. While Vann and Mayersky get the headlines, the “Pancake Posse” is content to just go about their business.

“We work as a team; one single unit,” Boone Grove senior offensive guard Kyle Colpitts said. “We pretty much stay out of the spotlight, and that’s fine with us.”

“I’ve coached these guys since they were in eighth grade and we started the first year of our middle school team,” Boone Grove offensive line coach Phil Katona said. “The one thing we’ve constantly preached is communication. They are always talking and working together.”

Katona was an offensive lineman at Griffith during his playing days and he’s instilled an all-for-one and one-for-all mentality in the line. When Vann ran for nearly 200 yards and five touchdowns in last Friday’s 53-0 win over South Central, it was the line who helped open up the holes for the speedy running back.

The Pancake Posse is a close-knit group that bonded over tire flips and driving the blocking sled this summer. Murray is the most outspoken of the group, but there’s a cohesiveness that allows each member to hold the other accountable. They joke that no one keeps an official tally on how many pancake blocks each player has this season, but that they know internally.

“We’re a smaller group and one of the benefits is that we’re always working together,” Cooper said. “We get a lot of reps with one another. We’re a unit.”

The Wolves (3-0) rushed for 360 yards and seven touchdowns against South Central. Tougher tests await on the schedule, including a battle with EC Central on Thursday night and a rivalry game against Wheeler next week. A potential Greater South Shore Conference title game against Whiting looms in the regular-season finale.

“Last week gives you confidence and you find out that things can go right,” Katona said. “We’ll keep working and the biggest thing I tell them is to always finish the play. The most important play is the next one.”

The beginning of the season couldn’t have gone much worse for Morton. The Governors fell 19-18 to Highland in their opener and lost senior quarterback Credell Prather to a wrist injury. Morton got off the mat and has come back with two straight victories, including a 20-0 shutout over Lake Central and a 35-23 win over Lowell in the home opener.

“The defense has just been outstanding,” Morton coach Sean Kinsey said. “We’re getting turnovers, we’re getting key stops. Last year we lost the field position battle and we’re turning that around this season.”

Junior JoJo Johnson leads the Governors with three interceptions while senior safety Tirae Spence has been flying around the ball and leads Morton in tackles. Backup quarterback Paris Hewlett has stepped in for Prather and threw for nearly 300 yards against the Red Devils.

“We immediately had to get him acclimated to that position,” Kinsey said. “He had only taken a limited amount of reps in a small package. We’re getting him up to speed and he’s doing well.”

Clark has scored more than 40 points in the last two games, including a 47-0 shutout over Roosevelt last Friday. The Pioneers will take their 2-1 record into Lake Station this weekend, marking the first time in eight years they've had a winning record this late in the season.

The Pioneers haven’t finished over .500 since 2010. They started the following season 3-1 before losing 21 of their next 22 games. Clark’s back-to-back wins in the last two weeks marks the first time the Pioneers have won consecutive games since a four-game winning streak in 2014.

Friday was James Mitchell of Merrillville's turn. The senior returned from an ankle injury to catch two passes. Both were in the end zone.

Boone Grove's Brae'ton Vann tries to get past Whiting's Tom Davenport during a game last season.