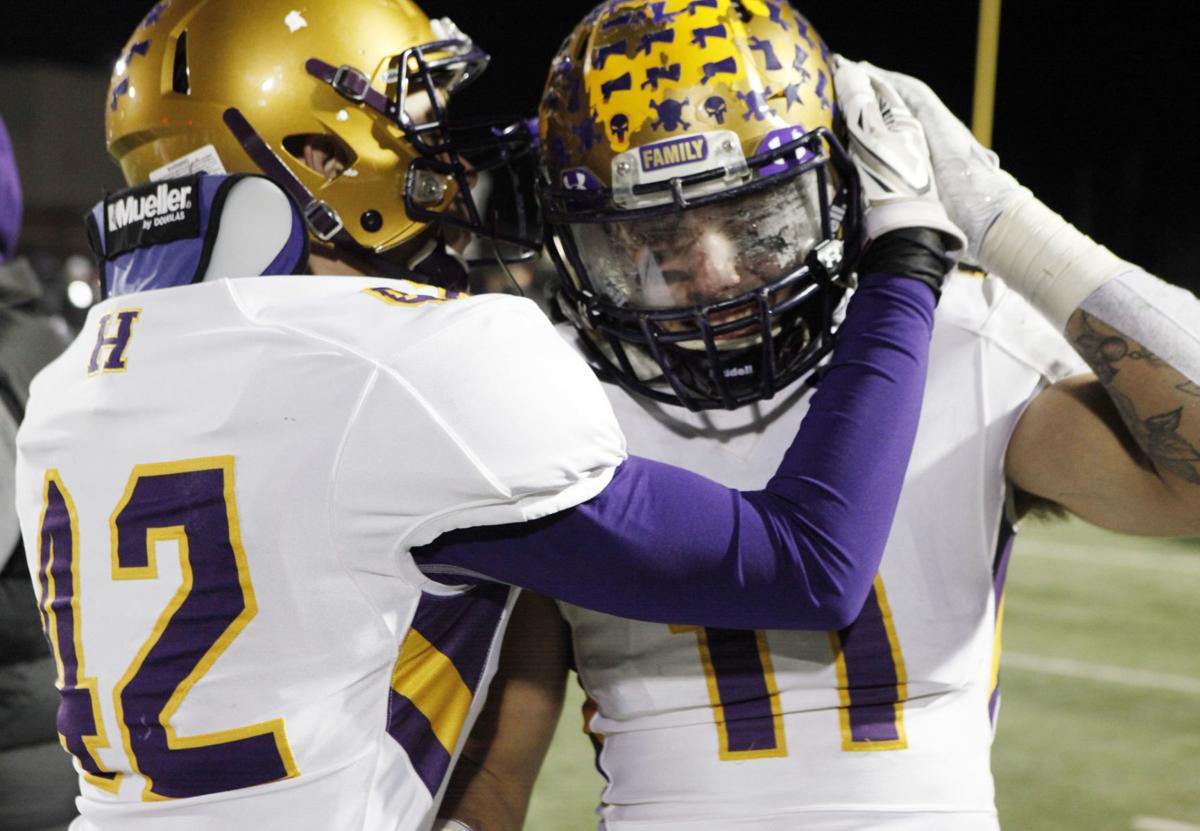 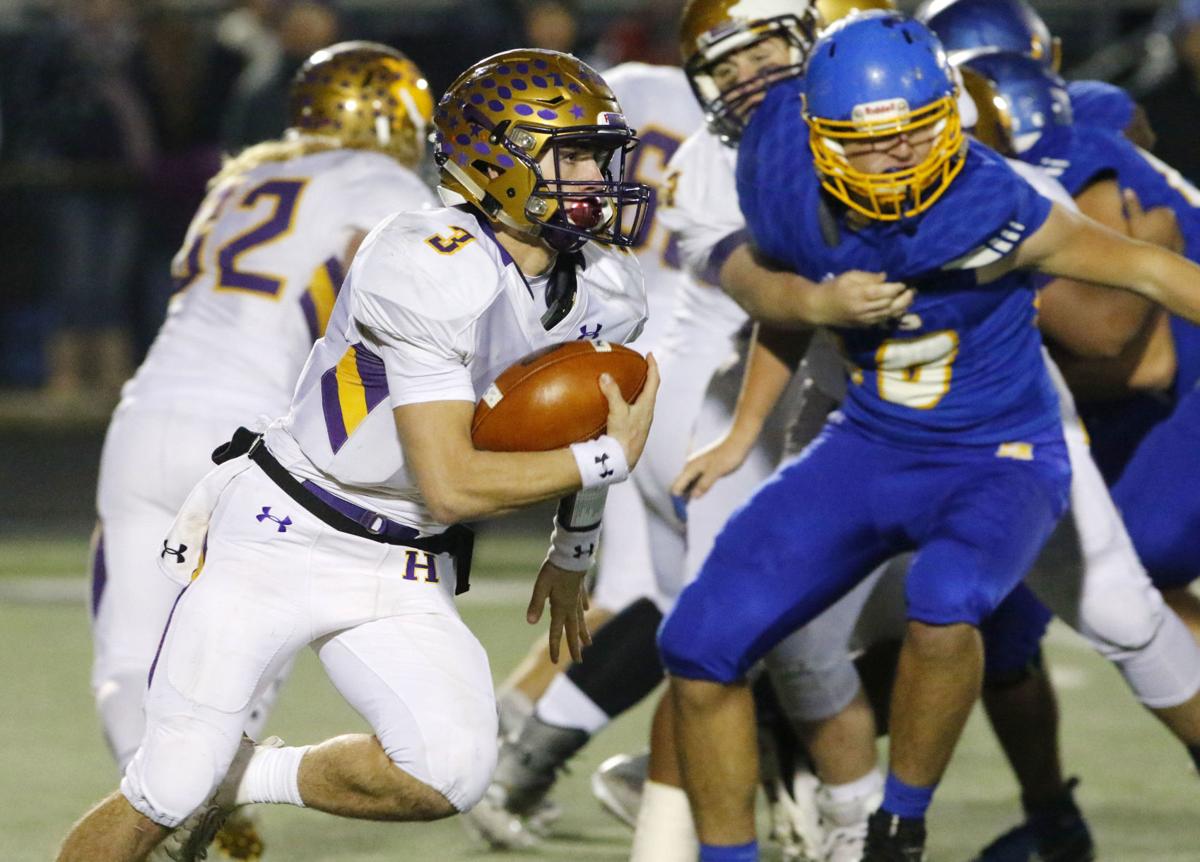 Hobart's Riley Johnston, left, finds room to run for a touchdown against East Noble Friday during a 4A semistate in Kendallville. 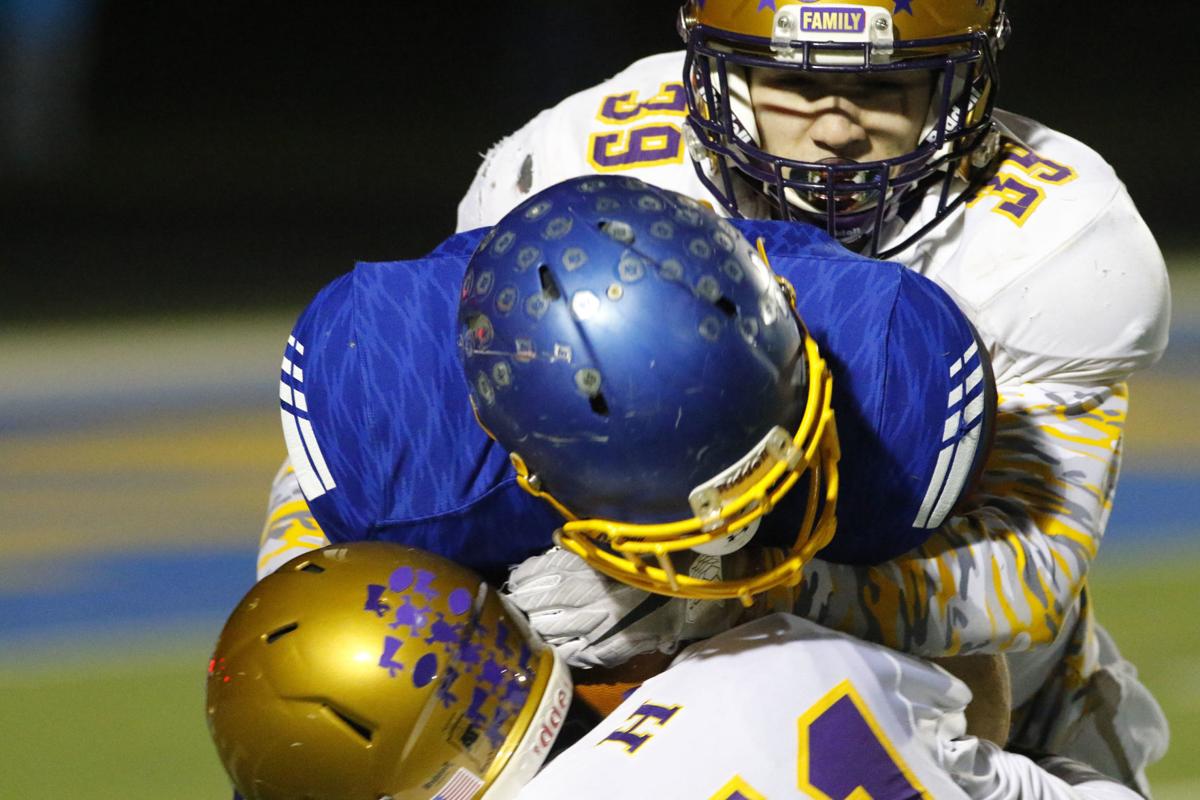 Hobart's Mark Mummey, above, stops East Noble's Justin Marcellus on a gain Friday during a 4A semistate in Kendallville.

KENDALLVILLE — Hearts were lodged in throats across the Hobart sideline as Riley Johnston’s desperation heave fluttered through the air on the final play of Friday night’s Class 4A semistate game.

Those hearts broke as two East Noble defenders knocked down Johnston’s pass, leading the Knights to a 29-24 victory in an instant classic. The Brickies had a chance to win the game with a touchdown late in the fourth quarter, but Hobart’s final drive stalled at the East Noble 30-yard line, leading to Johnston’s fourth down prayer.

“We made a lot of mistakes tonight,” Johnston said. “Mistakes that cost us the game and cost us state.”

The Brickies (11-3) looked to be in complete control after scoring 17 unanswered points off four turnovers in the first 15 minutes of the game. Hobart’s defense and special teams delivered in all manners on Friday.

Sean Underdahl recovered a fumble on the third play of the game to give the Brickies prime field position. Zach Vode blocked a punt on East Noble’s second possession of the game and then picked off quarterback Bailey Parker on the next possession. By the time Matthew Benton brought in his state-leading 12th inception of the season and returned it 25 yards for a touchdown early in the second quarter, the Brickies led 17-0 with East Noble having yet to cross midfield.

Still, there were troubling moments for the Brickies. Hobart had a first-and-goal from inside the 5-yard line and had to settle for a field goal. Johnston was later intercepted in the red zone. Despite the 17-0 lead, there were chances for more points in the early stages of the game and Hobart left the door open for East Noble.

East Noble seized the momentum midway through the second quarter when the Knights (14-0) were facing a 4th-and-1 from their own 31-yard line. Coming up short would give the Brickies a golden opportunity to turn the game into a blowout while converting would still leave East Noble 70 yards from the end zone. Justin Marcellus pushed his way through the line of scrimmage for the first down and the junior scored five plays later.

“When you’re playing a game where you’re trying to get to state, you need to do something bold,” East Noble coach Luke Amstutz said. “We weren’t trying to lose 24-7. It didn’t matter if we got blown out or if we lost by one point. We needed to make a play. I was confident in our guys.”

That touchdown was the spark that lit East Noble’s fire as the Knights rattled off 26 unanswered points to take a 26-17 lead with 8:19 left in the fourth quarter.

Hobart wouldn’t go quietly as Johnston ripped off a 71-yard touchdown run to bring Hobart within 26-24. East Noble chewed up the clock and the field and extended its lead with a 30-yard field goal, forcing the Brickies to have to score a touchdown to win the game.

“I had all the confidence in the world that we were going to go down and score,” Johnston said.

Johnston hit Zach Vode for three completions and the junior quarterback ran for 34 more yards on the drive, but couldn’t get the Brickies into the end zone.

“I’m proud of these guys,” Hobart coach Craig Osika said. “They battled. What they did this year, for the town, for the school. It’s hard to say goodbye to these seniors. These guys didn’t quit on us.”

More in Friday Night Football Recap: Catch up on all of last night's excitement here! (4 of 9)

Hobart's Riley Johnston, left, finds room to run for a touchdown against East Noble Friday during a 4A semistate in Kendallville.

Hobart's Mark Mummey, above, stops East Noble's Justin Marcellus on a gain Friday during a 4A semistate in Kendallville.