Illinois prep coaches, athletes get educated on concussions
Share this
1 of 2 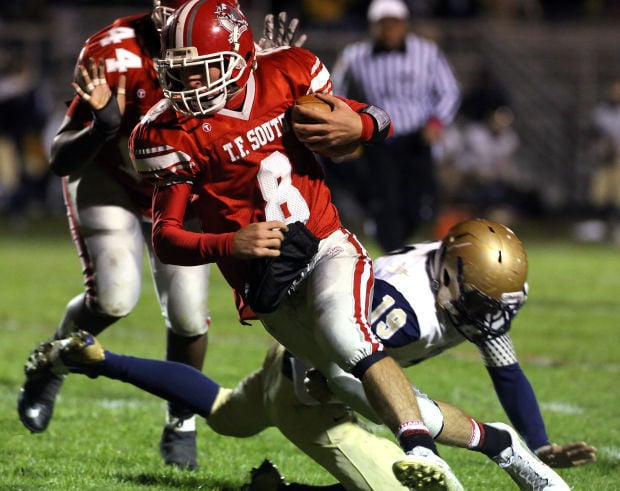 T.F. South quarterback Cody Petrich, shown here in a 2013 game against Lemont, said he took a hit last year in a game against Bremen and missed a whole series. 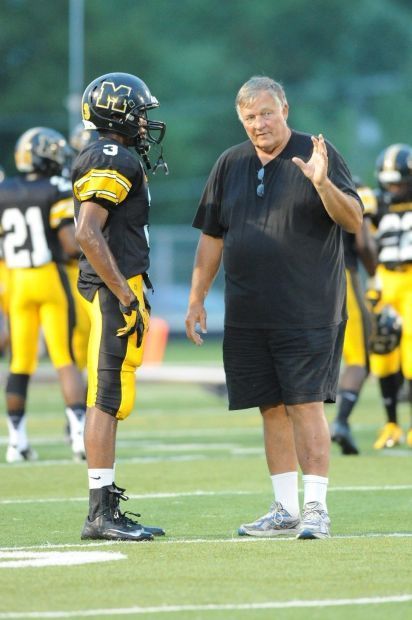 It's called "getting your bell rung."

In reality, it is a concussion.

"I kept trying to get my helmet, but the trainers wouldn't let me," Petrich said. "I remember it took a whole offensive series for me to get back in."

Petrich passed the "concussion tests" and re-entered the game, but he realizes it could have been worse. He and his Rebel teammates recently watched a required video on concussion awareness.

"It's football, but the movie was educational in that you now know what to look for if you take a hit," Petrich said. "It is better to be educated about it and to be safe."

Petrich said it not only applies to football, but everyday life.

"I had a worse concussion when I was about 7 or 8," Petrich said. "I jumped off a bed, landed on an exercise ball and hit my head on the dresser."

The Illinois High School Association recently required all coaches to take an online concussion training course, and Gov. Pat Quinn signed it into law Tuesday. In addition, players must sign a concussion awareness form and return it before they can participate in a sport.

The law, which took effect immediately, requires the IHSA to develop a program that schools' athletic staff members have to complete every two years.

IHSA Executive Director Marty Hickman said in an Associated Press story the free program, which is available to coaches and athletic directors now, would take at least a few hours to complete. Student-athletes will also get concussion awareness education.

Marian Catholic athletic director Dave Mattio, who was the Spartans' football coach for 37 years before stepping down after the 2012 season, said these steps by the Legislature and the IHSA have renewed the efforts to make safety the watchword when it comes to injuries.

"With the recent litigations involving professional football players concerning head injuries, and the different movements taken place at the collegiate level over the health and well-being of student-athletes, it is only natural for these topics to be of utmost concern to the high school and grade school levels," Mattio said.

"The IHSA is attempting to have coaches familiarize themselves with the correct protocol for eliminating and dealing with head trauma. The IHSA requirement to have coaching staff members comply with knowledge and protocol for concussions is appropriate."

T.F. South athletic director Marc Brewe said all of his fall-sport coaches have completed the online course, as well as out-of-season coaches.

"I discussed it with the coaches at the preseason meeting and I checked on the IHSA website to ensure compliance by all of our coaches, volunteer and paid," Brewe said.

T.F. South trainer Gina Helbling said education is a step in the right direction for coaches and student-athletes.

"It is important coaches and athletes can recognize the signs and symptoms of concussion, so it can be reported to a health-care professional," Helbling said.

"As an athletic trainer, it makes me more comfortable knowing coaches and athletes understand the entire process thoroughly if an athlete sustains a head injury."

Things looked bleak for Portage after running back Devan Howard went down with what turned out to be a torn ACL in a 38-0 loss at Valparaiso on Oct. 8.

Eddie Goff is a 'Demon' on defense for Hanover Central football

Eddie Goff has a distinctive nickname at Hanover Central.

T.F. South quarterback Cody Petrich, shown here in a 2013 game against Lemont, said he took a hit last year in a game against Bremen and missed a whole series.