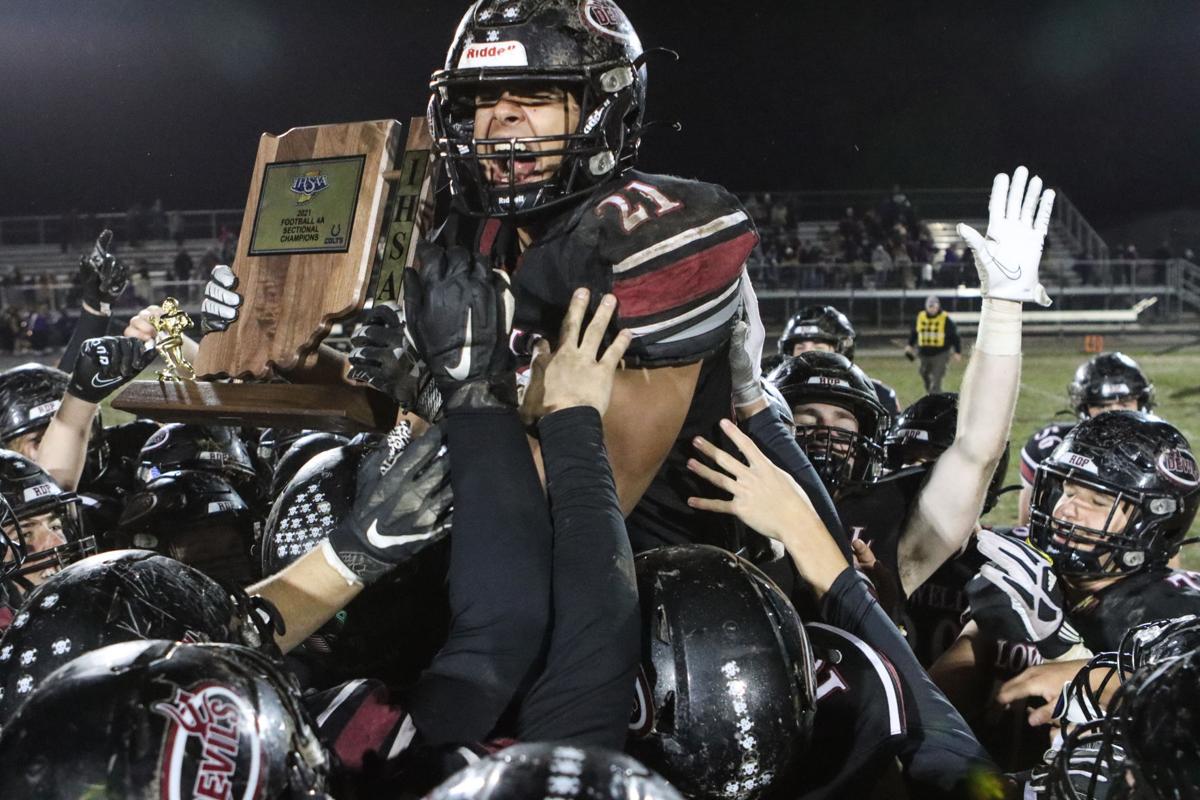 Lowell's Joey Heuer, center, celebrates with the Class 4A sectional championship trophy as he's hoisted up by his teammates on Friday in Lowell. 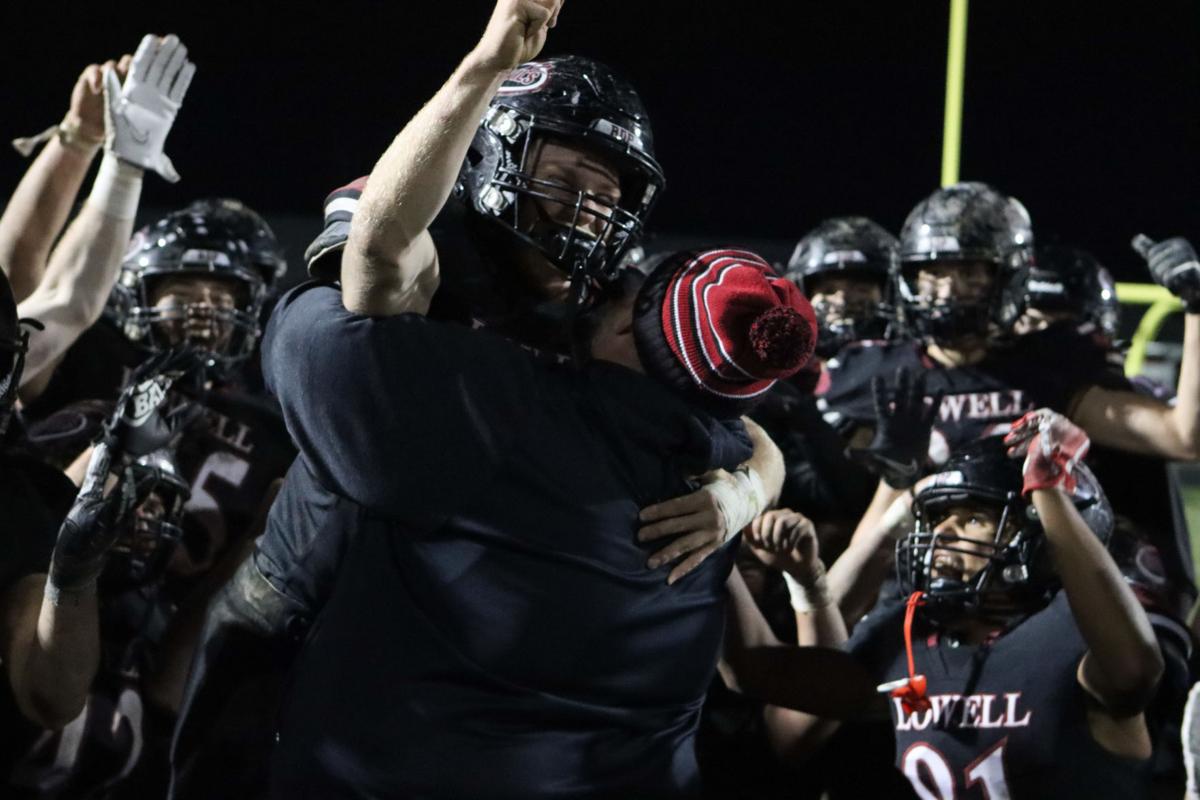 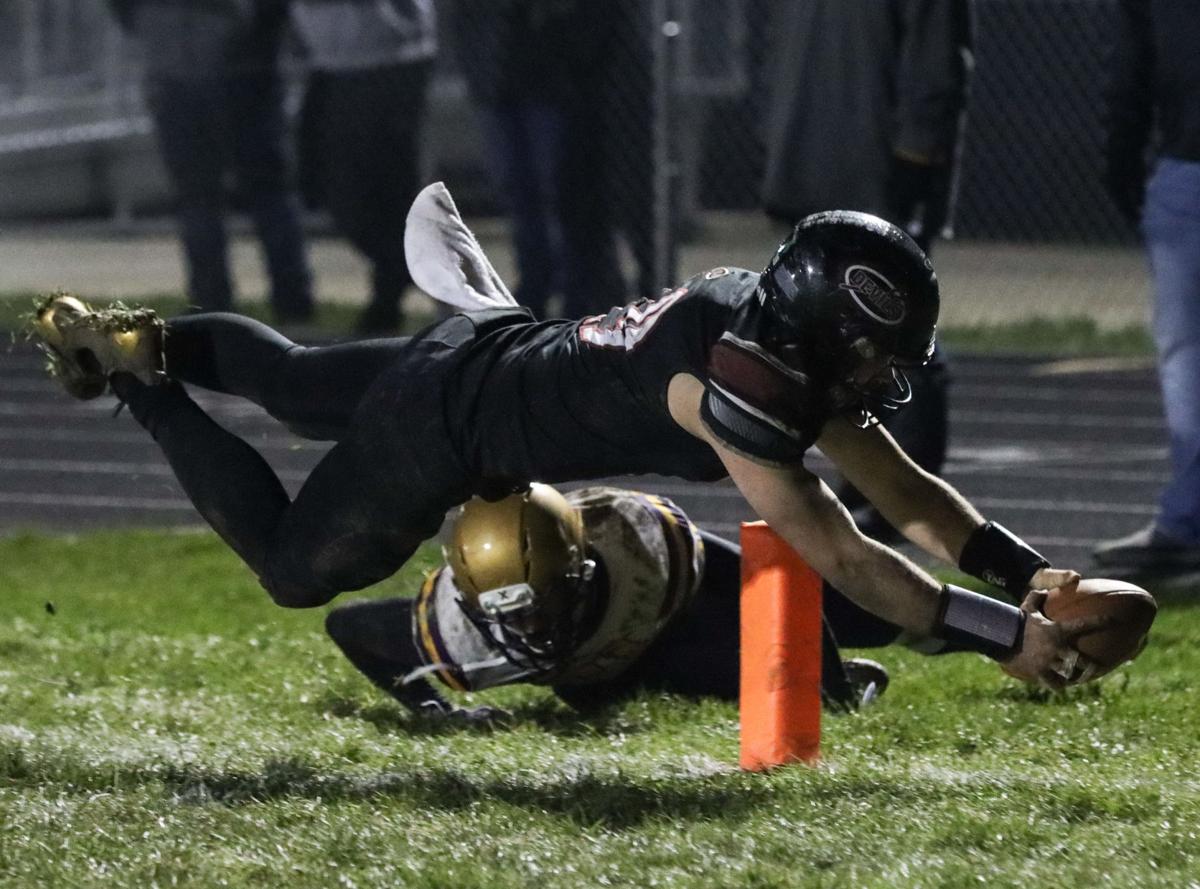 Lowell's Riley Bank jumps into the end zone for a touchdown against Hobart on Friday during a Class 4A sectional final in Lowell. 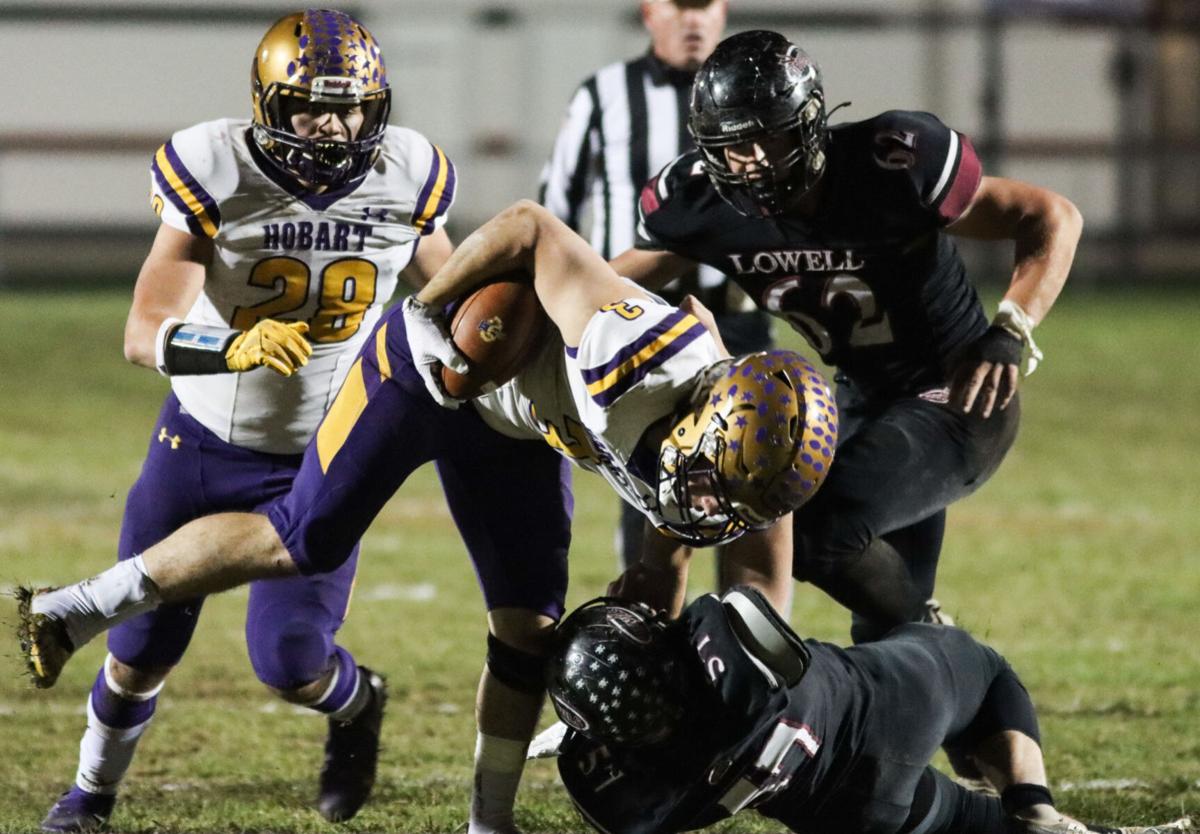 Hobart's Trey Gibson, center, gets tripped up on a gain on Friday during a Class 4A sectional final in Lowell.

LOWELL — Adam Malave is a three-year starter on Lowell's offensive line, but he hadn't played this postseason before Friday.

On Friday night, he was. Malave and linemates Josh Moore, Logan Aicher, Hunter Cross, Jacob Kissel, James Johnson and Colton Quale paved the way for an epic offensive night for the Red Devils.

The Red Devils (9-3) won their seventh straight game and snapped a four-game losing streak in the series, which included defeats in the sectional finals the past two seasons.

With its first sectional title since 2018, Lowell will host New Prairie (10-2) in next weekend's regional.

"We knew we were pretty evenly matched on both sides of the ball," said Lowell quarterback Riley Bank, who ran 17 times for 141 yards and three touchdowns. "It's just whoever wanted it more."

In the fourth quarter, Ryan Marx added a 37-yard touchdown run. Marx, who entered the night with 27 carries for 177 yards, finished with 106 on six rushes.

"We obviously have a great line and our receivers block well, too," said Bank, who went over 1,000 yards for the season. joining Heuer in that category. "Then we have a great set of backs, great skill positions."

While the Devils were rolling down the field in the ground game, they also were containing a potent Hobart offense led by running back Trey Gibson and quarterback Noah Ehrlich, who accounted for nearly 3,300 yards of total offense before Friday.

Gibson scored the Brickies' lone touchdown in the fourth quarter and finished with 22 carries for 104 yards, Ehrlich was 6 of 16 passing for 69 yards.

Junior defensive end James Langen, who had a key tackle for loss when Hobart was threatening in the second quarter, said the game plan was to "try to get the ball in the quarterback's hands, force him to pass the ball.

"Just do everything we can to stop (Gibson). I think the D-line and the linebackers did a great job of doing that."

After the Devils held the Brickies to a 25-yard field goal by Miki Djankovich on that series, they got a 30-yard field goal of their own by Caden Britton on the last play of the first half. Then came the big third quarter to the game out of reach.

"It's all about momentum," Lowell coach Keith Kilmer said. "They're high school kids. The mind-set in the locker room is different. That gave us a boost to come out in the second half and take control."

The Brickies repeat journey to Lucas Oil Stadium was stopped by the Red Devils.

Lowell's Joey Heuer, center, celebrates with the Class 4A sectional championship trophy as he's hoisted up by his teammates on Friday in Lowell.

Lowell's Riley Bank jumps into the end zone for a touchdown against Hobart on Friday during a Class 4A sectional final in Lowell.

Hobart's Trey Gibson, center, gets tripped up on a gain on Friday during a Class 4A sectional final in Lowell.