No. 2 Merrillville squeaks past No. 5 Crown Point to win sectional title
Share this
× 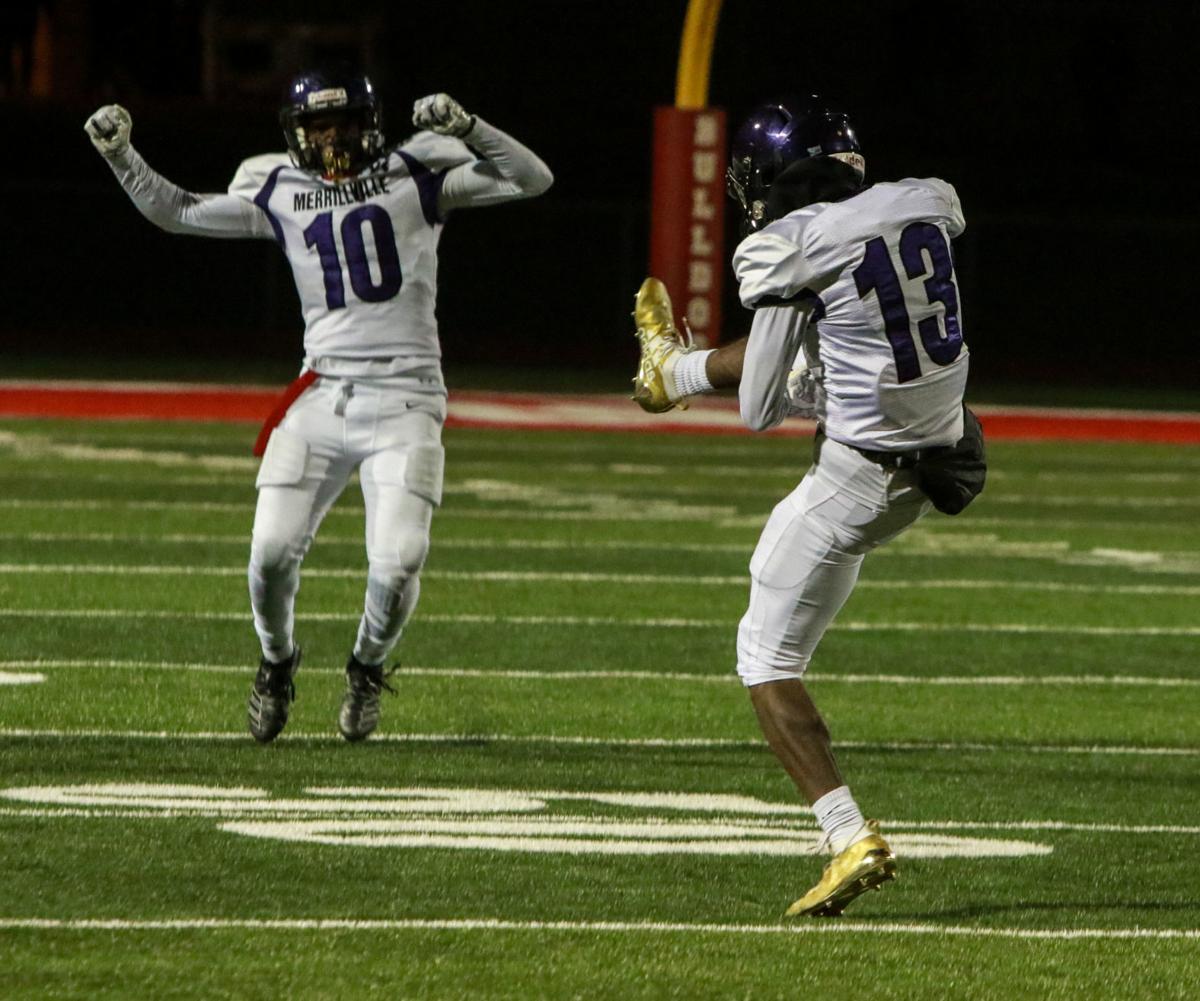 Merrillville's A'Veyawn Madry celebrates, left, after his teammate Adonnis Johnson grabs an interception sealing their win over Crown Point on Friday in the sectional championship. 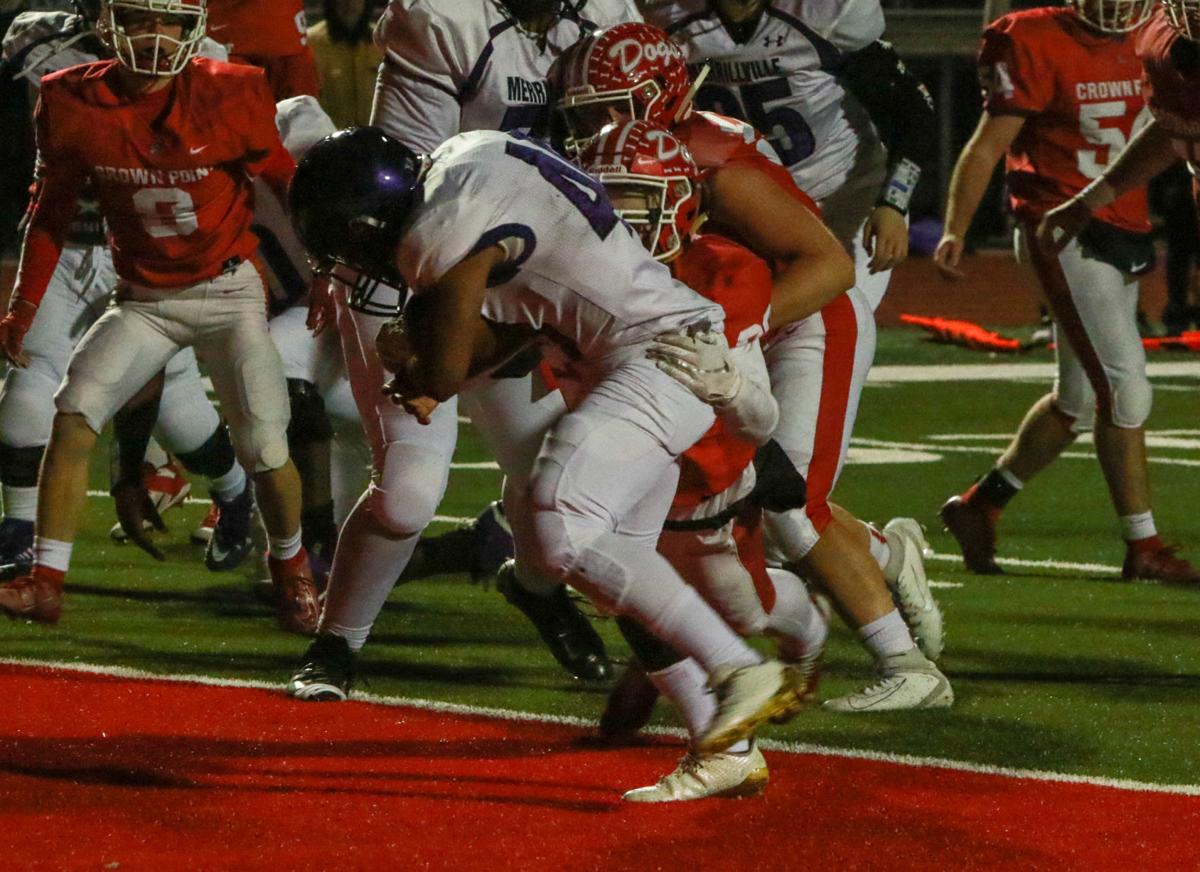 Merrillville's Darius Schultz runs in for a touchdown against Crown Point on Friday in the sectional championship.

CROWN POINT — After Merrillville defeated Lafayette Jefferson in the Class 6A Sectional 1 semifinals to advance to the sectional championship, Pirates coach Brad Seiss gathered his team together on the field and asked a simple question.

“How many of you have had your season ended by Crown Point?”

All of his players raised their hands.

The Bulldogs knocked Merrillville out of the playoffs three years in a row. But on Friday night (Nov. 8, 2019), the Times No. 2 Pirates got their revenge with a 10-9 victory to claim their 12th sectional title and first in four seasons.

“It was choppy, a lot of penalties,” Seiss said. “But us getting the turnovers was big. That was the difference, just being able to get the ball back and make stops when we needed them.”

Running back Darius Schultz got Merrillville (10-1) on the board at the 4:28 mark of the first quarter. The senior’s 4-yard touchdown run capped off a six-play, 61-yard drive for the Pirates and was Schultz’ ninth score of the season.

He finished the evening with just four carries for 15 yards, and although his stats weren’t eye-popping, the senior didn’t care. Schultz is one of three Merrillville players to rush for over 300 yards this year and made it clear that the team’s sectional crown is the product of a group effort.

“(My touchdown) had a very big impact, not because of my running but because of the lineman,” Schultz said. “My O-line was the main key. We all work as hard as we can and put a lot of effort into what we do.”

No. 5 Crown Point had its opportunities but just couldn’t capitalize.

After a 57-yard touchdown pass from junior quarterback Will Pettit to senior wide receiver Tysen Cazy in the second quarter, the Bulldogs scored again on a safety early in the third quarter.

Senior defensive lineman Collin Flavin strip-sacked Pirates senior quarterback Aahric Whitehead to bring his team within one point. As the ball bounced in Merrillville's end zone, Pirates junior wide receiver Armani Glass slapped it out of bounds to give up a safety rather than a touchdown.

His heads up decision paid off.

On the first play of Crown Point's ensuing drive, junior defensive back Anthony Mitchell picked off Pettit to quell the Bulldogs' momentum.

“It was really big because it got us our energy back,” said Mitchell, who snagged two interceptions. “We were down and confused, and we weren’t communicating. But once I got that pick, everybody started talking and getting more into the game, and we just played better.”

Even still, Crown Point (6-5) had another chance to keep its season alive. Following a slew of defensive penalties by Merrillville, the Bulldogs put together a drive late in the fourth quarter and had an opportunity to take the lead on a 42-yard field goal attempt.

Senior defensive back Adonnis Johnson sealed the victory by intercepting another pass from Pettit with 46.9 seconds left on Crown Point’s last possession of the year.

The Pirates will now face Warsaw at home in the regional championship, and Johnson couldn't hold back his emotions after extending his prep career.

“That first play I let Tysen (Cazy) catch a touchdown on me,” Johnson said while wiping tears from his eyes. “I wasn’t down, but I knew I had to make up for it, somehow or someway. I patiently waited on my time to make a play, and when it came, I made it.”

No. 2 Merrillville narrowly leads No. 5 Crown Point at halftime

Merrillville and Crown Point proved that their rivalry is as strong as it’s ever been in the first half of the Class 6A Sectional 1 Championship.

Merrillville's A'Veyawn Madry celebrates, left, after his teammate Adonnis Johnson grabs an interception sealing their win over Crown Point on Friday in the sectional championship.

Merrillville's Darius Schultz runs in for a touchdown against Crown Point on Friday in the sectional championship.