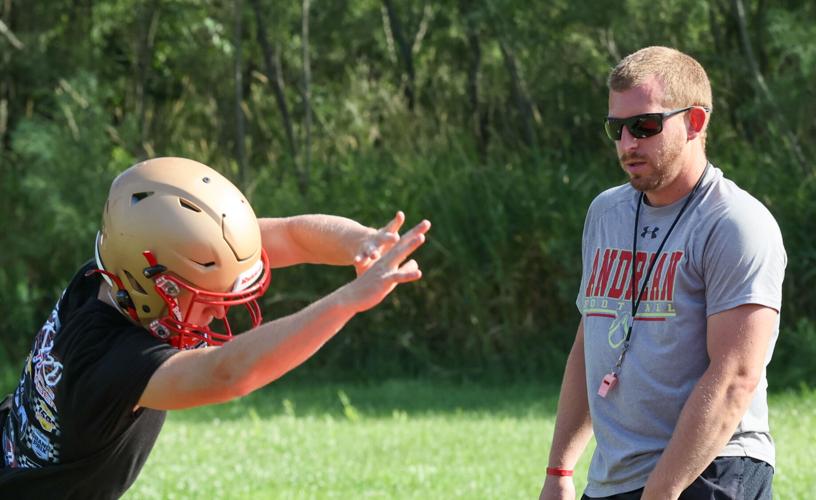 Coach Chris Skinner, right, and Andrean are looking to defend their Class 2A state title. 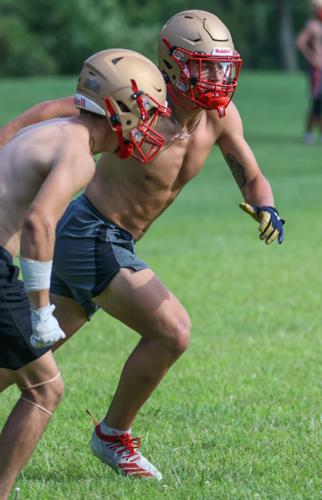 MERRILLVILLE — Drayk Bowen is looking for one final victory lap.

The consensus top-ranked senior football player in Indiana is looking for his third state title in 12 months before heading off to hit the gridiron at Notre Dame.

Bowen and the 59ers are defending their Class 2A football championship, and the 6-foot-2, 225-pounder also was a mainstay on the 59ers baseball team that won a 2A title of its own in June.

“It’s my last go around in high school football. I’d love to go out on top,” said Bowen, a four-star recruit who plans to pass up his senior baseball season in order to enroll in college a semester early.

“I’ve worked super hard for individual accolades but I don’t really care for those that much. It was exciting last year because that’s all I wanted, to win state. Another one would be icing on the cake.”

Andrean started working toward that goal Monday as it joined the rest of the state's teams in opening preseason workouts. The 59ers motto has always been “tradition never graduates” and part of that is advancing beyond past success.

“Nothing has changed. We haven’t really talked about last season. It’s a new team, a new senior group, a different mentality,” coach Chris Skinner said. “We have a certain culture here that we like, a certain energy. But ultimately, they’re going to choose their own path.”

Andrean looks like it has the senior leadership to choose the right road.

A trio of 12th graders came to the school together from Clark Middle School, in the Lake Central district. Bowen, Antonio Barnes and Ian Urchell are beginning another season together.

Barnes spent two years at Lake Central, but he and Bowen were on the same team when they were 6 or 7 years old. Urchell’s been there since eighth grade.

“It helps knowing who’s behind you, knowing I can trust him,” Bowen, a linebacker, said of Barnes, a safety. “I’ve played with him so long and I know he’s going to be in his spot at all times.”

The seniors are trying to impress upon the new players — Andrean has to replace 12 starters — what it is to be the team circled on a lot of schedules.

“Coming from Andrean, we’ve always been a really good team so the target’s been there no matter what,” Urchell said. “We have to embrace that in order to feel ourselves.”

Part of Andrean’s tradition is the red and gold scrimmage, which happens Saturday after the first week of practice. Alums, family and friends come out to tailgate and watch the first football of the year.

“Now, 100% of the focus is on football,” Skinner said. “We’re leading up to hitting the field under the lights and that’s exciting.”

The offense is expected to be formidable, with most of the skill positions returning. Bowen is again expected to get the bulk of the carries in the backfield.

Junior quarterback Scott Ballentine threw for over 2,800 yards with 28 touchdowns and only eight interceptions as a sophomore. Skinner said he’s splitting reps equally with senior Billy Henry in camp and either could start.

Two of Ballentine’s three favorite targets graduated, but junior receiver Patrick Clacks III is back and will be counted on. The Division I prospect had 51 catches for 753 yards and five scores as a 10th grader.

Whoever’s throwing and catching, Urchell believes they’ll have time to do it. Injuries on last year’s offensive line created depth and a bond that he expects to pay dividends.

“Every year, you have to work on trusting the guy next to you and with guys out, you have to rebuild that trust week after week,” Urchell said. “We’ve gotten so good at that, this year’s line has a certain type of connection and it’s just going to dominate.”

The defense is a different story. Barnes will lead a secondary that needs to replace some key cogs but will benefit from the return of the top tackler in Bowen. Most of the top tacklers in 2021 graduated, though. None of the defensive line is back.

“It’s just about getting the new kids acclimated and getting them used to making decisions, making sure they know what they’re doing,” Barnes said. “I like just being a role model for them.”

Skinner was a junior at Andrean when the 59ers won the 2004 state championship. He knows what it is to try to repeat. He tries to convey that information to his team while allowing it to develop its own personality. He wants the players to take ownership.

“I know what that’s like, carrying the weight of those expectations,” Skinner said. “I don’t know how this team is going to grow but it certainly isn’t going to be anything that has to do with last year.”

The Trojans opened camp without sharp and productive quarterback Chris Mullen, but Chesterton feels like it still has reason to be optimistic.

Coach Chris Skinner, right, and Andrean are looking to defend their Class 2A state title.