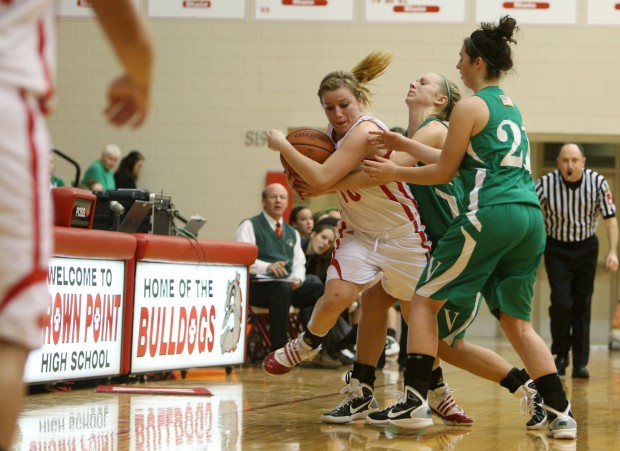 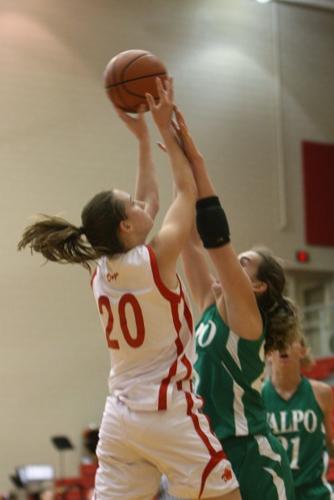 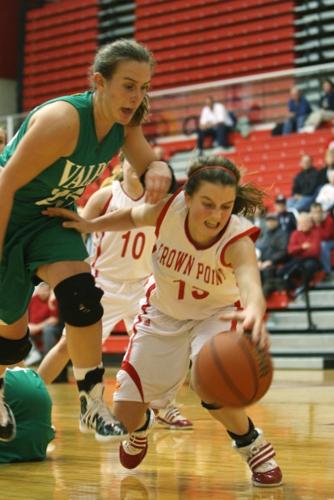 Crown Point's Sarah Rivich fights to keep the ball in-bounds while being pursued by Valparaiso's Ariana Paul on Tuesday. 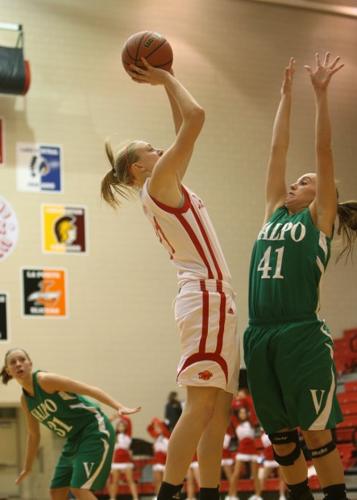 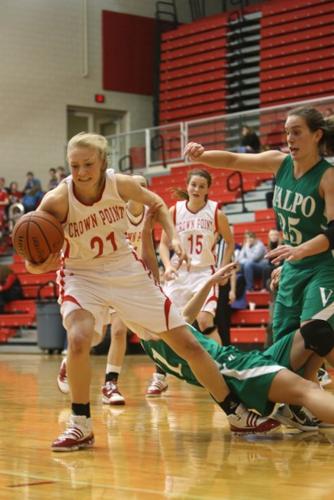 Crown Point's Michaela Prough comes out of a tussle against the Valparaiso's defense with the ball. 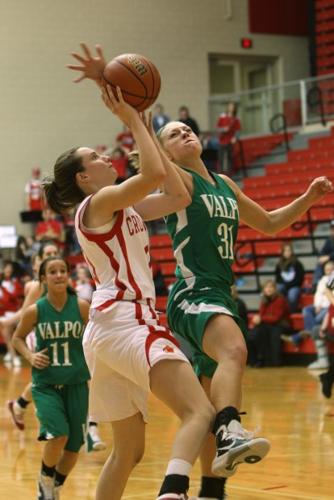 CROWN POINT | For the second game as many games, the Times No. 3 Crown Point squandered a double-digit halftime lead.

After allowing a pesky Valparaiso team to come back before closing the door on the Vikings, Crown Point squeaked out a 56-54 Duneland Conference victory at home. Kendall Brown led the Bulldogs with 21 points and added five rebounds and three assists.

"We just need to play both ends of the court," Brown said of the Bulldogs third-quarter letdown. "I think it is definitely on the defensive end. That's what gets our offense and when we're not doing that, that's when it starts to go downhill."

The Bulldogs (9-0, 5-0) opened up a 35-19 halftime lead before being outscored by the Vikings (5-5, 2-3) 22-11 in the third quarter. With his team unable to convert on a couple of looks under the basket in the third, coach Mike Cronkhite was quick to point out the difference these baskets would have made.

"We've struggled in the third quarter all year," Cronkhite said. "We get a big lead, we come out on fire and then we go in a little funk and we get complacent in the third quarter and we let a team back in the game. We missed a lot of bunnies. Snow day yesterday and we didn't have school so (we're) a little rusty."

The Vikings were led by senior Ariana Paul who finished the game with 18 points, 10 rebounds and four assists. Valpo's defense was able to keep it in the game and coach Jeanette Gray felt if the Vikings were able to hold the Bulldogs under 60 points, her team would have a solid chance at a win.

"It was kind of a tale of two halves," Gray said. "We made some adjustments at halftime and really there were things we should have been doing in the first half. Just simple things on defense. Crown Point you can't expose any weaknesses defensively because they'll exploit that."

VALPARAISO | There may not be a better defensive team in the region than Valparaiso.

"She's a legend," says Rafael Nadal on Serena Williams ahead of her retirement

"She's a legend," says Rafael Nadal on Serena Williams ahead of her retirement

This extreme athlete brings his wheelchair to the next level

This extreme athlete brings his wheelchair to the next level

Crown Point's Sarah Rivich fights to keep the ball in-bounds while being pursued by Valparaiso's Ariana Paul on Tuesday.

Crown Point's Michaela Prough comes out of a tussle against the Valparaiso's defense with the ball.

Crown Point's Courtney Kvachkoff has a shot blocked by Valparaiso's Sarah Wallace in the Bulldogs DAC win on Tuesday.
© Copyright 2022 The Times, 601 W. 45th Ave. Munster, IN 46321 | Terms of Use | Privacy Policy | Do Not Sell My Info | Cookie Preferences
Powered by BLOX Content Management System from TownNews.com.
You don't have any notifications.