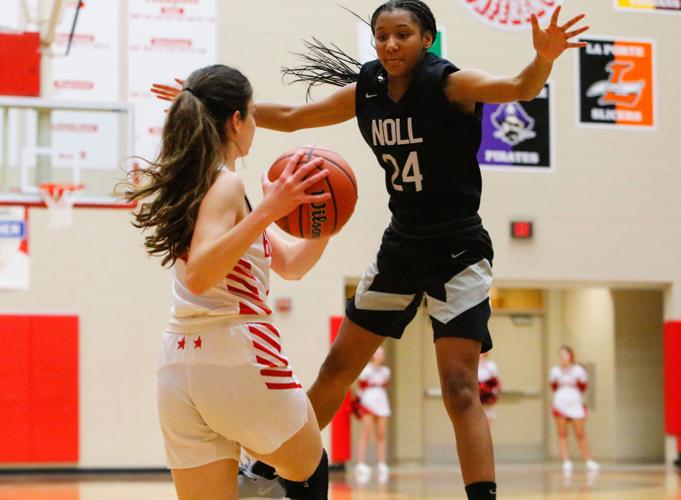 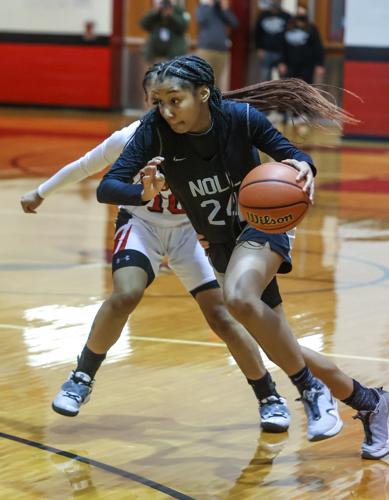 HAMMOND — Not even a minute into the first game of her sophomore season, Kennedy Blakely realized she was in trouble.

Blakely’s Bishop Noll Warriors were playing defending Class 4A state champion Crown Point. The Bulldogs scored once and then again to go up 4-0 and implemented their suffocating press defense. Blakely took the ball on an inbound and tried to dribble through the collapsing CP defenders.

She didn’t. She turned the ball over. Then again. And before she knew it, the Warriors trailed by 12.

“Shoot,” Blakely remembers thinking, “I can’t do this.”

She couldn’t. At least, not that version of Kennedy Blakely.

The Crown Point game was the first of Kennedy’s high school career without older sister Courtney Blakely, a former Times All-Area First Team member now a sophomore at Middle Tennessee State. Courtney was the undisputed leader on the floor. The aggressor. Kennedy understands now she was too reliant on her.

“I didn’t realize how dependent we were on my sister until she wasn’t here,” Kennedy said before the start of her junior season. Even still, she went on to average 9.8 points, 5.8 rebounds, 3.1 assists and 3.1 steals per game.

Kennedy needed to become the alpha Courtney was to take her game to the next level and turned to big sister for help. Over the course of a long month in the summer Kennedy joined Courtney for individual practice sessions where Kennedy rebuilt her confidence on the court.

With one drill in particular, Courtney would defend Kennedy the length of the floor in an effort to bully her around just like those Crown Point defenders did. At the end of the court awaited a defender to try and block Kennedy’s layup effort. Nothing came easy.

“I needed to get tougher,” Kennedy said. “The way I build confidence is by repetition. I needed to do it over and over again until I feel comfortable with what I’m doing.”

Kennedy joined Bishop Noll’s team as a freshman with athleticism and awareness providing proof she was Indiana Basketball Hall of Famer Angela Hamblin-Blakely’s daughter and Courtney’s sister, coach Vanita Golston said. But the physical gifts combined with having Courtney there to help sometimes masked her flaws.

Last season revealed that. Kennedy has since came back to practice a different sort of player by her own creation.

“I really appreciate that she doesn’t take the weight of being Angela Hamblin-Blakely’s daughter,” Golston said. “She doesn’t take the weight of being Courtney Blakely’s sister. She just tries to run her own race and come in every day to work hard. I think she understands her strengths better now and when she shows up the way she does consistently the results are going to come.”

Kennedy expects to play every position on the floor at times this season and has prepared for such. She was the second tallest player on her AAU team which forced her to defend all five spots. In a perfect world, she plays the traditional wing but nothing is perfect.

When Kennedy describes her goals, scoring is at the bottom of the list. She doesn’t want to put a point number out to go chase and wind up being benched for shooting half-court shots. Instead, she aims to average more than eight rebounds per game, three steals per game and three assists per game.

She wants to impact the game everywhere.

It’s a far cry difference from where she was at this time a year ago. With a renewed sense of confidence built over a challenging sophomore season and work-filled summer, it’s Kennedy’s time to take her next steps as Bishop Noll’s undisputed leader.

Girls basketball practice is underway for Lake Central and other teams around the state.