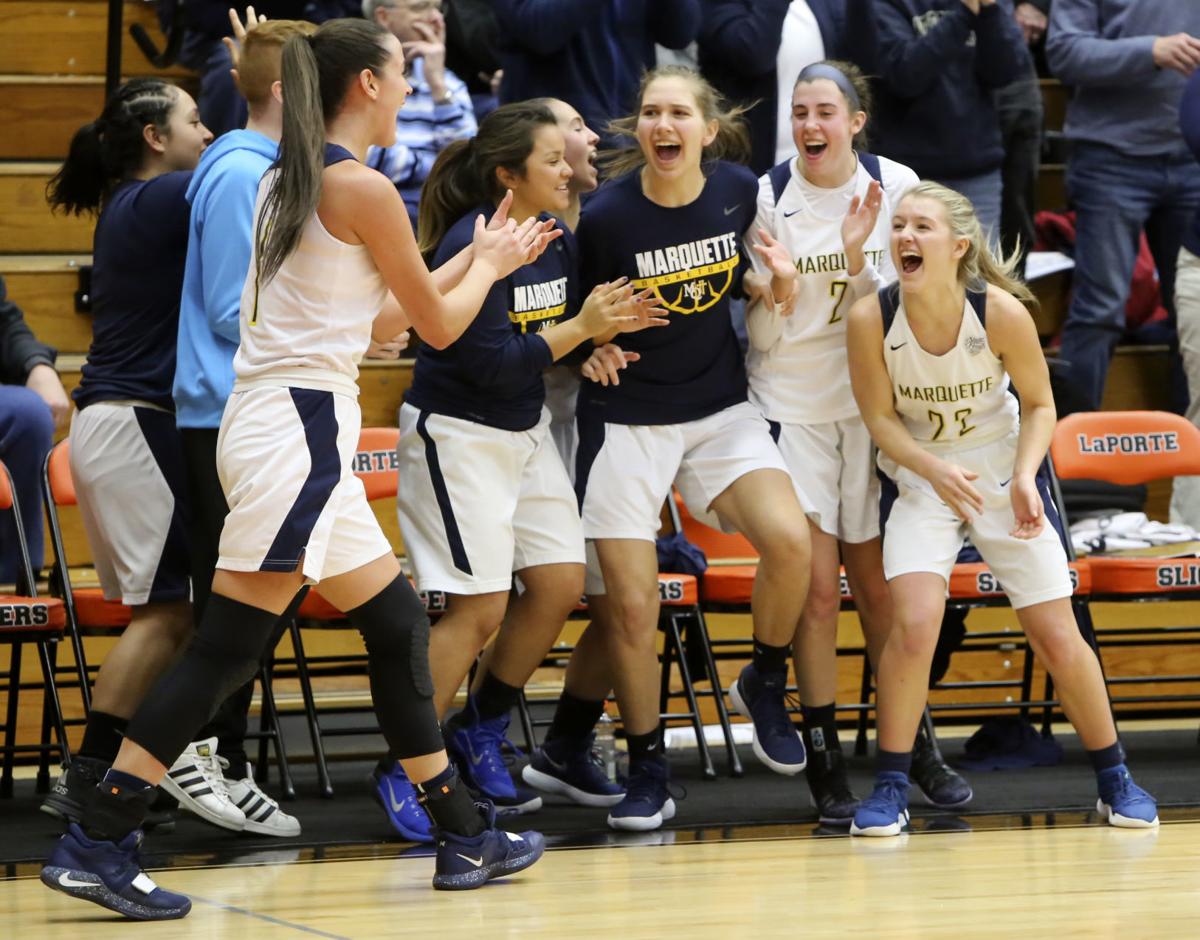 The Marquette Catholic girls basketball team, which is pictured during Saturday's LaPorte semistate victory over Northfield, will attempt to beat Vincennes Rivet in the Class A state final for a second year in a row. 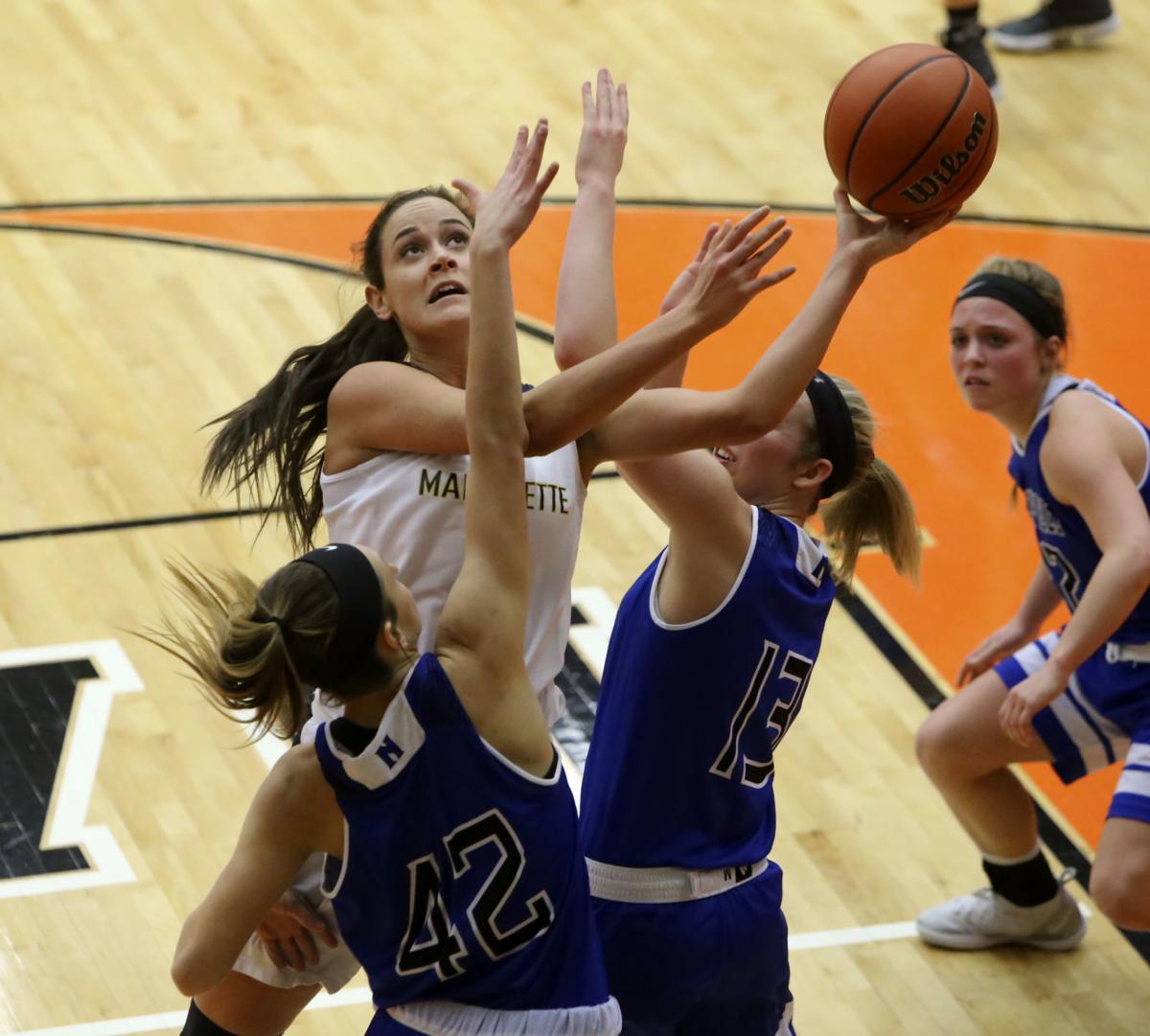 Marquette Catholic's Sophia Nolan shoots over Northfield’s Kearston Stout (42) and Ariel Dale in the LaPorte semistate game Saturday. Nolan scored a game-high 26 points to lead the Blazers back to the state final.

MICHIGAN CITY — Marquette Catholic has a chance to make history.

If the Blazers girls basketball team comes away with another victory Saturday at Bankers Life Fieldhouse, it would be just the fifth time that a Class A program won back-to-back state titles in IHSAA history. Standing in between Marquette Catholic and another championship banner is a familiar opponent — Vincennes Rivet.

“Honestly, we probably thought that was going to be the team we were gonna face all along,” Blazers coach Katie Collignon said. “They’ve had a phenomenal season. They’re playing well. But I think we’re excited.”

The Patriots are undefeated this season and will make their sixth appearance in the state final, including a second straight matchup against the Blazers. Last year, Marquette Catholic squeaked out a 38-31 win to secure the school’s first state title in girls basketball.

Collignon was pleased with her team’s performance because it ultimately resulted in a win, but she expects her squad to play with more cohesion in the rematch. One of the biggest differences she’s emphasized all season about her players, and specifically the senior class, is that they’re more mature and better equipped to handle adversity.

In last week’s semistate game against Northfield, Marquette Catholic scored just eight points in the first quarter and missed all 18 of its 3-point attempts but still managed to pull out a 15-point victory and snap the Norsemen’s 20-game winning streak. Senior Sophia Nolan led the charge with a game-high 26 points, including 10 points in the fourth quarter.

“I want to play with that same momentum and energy that I did last Saturday, this Saturday,” Nolan said. “I just want to win the game and get the job done.”

Morgan Crook was held scoreless in the Blazers' last outing and missed all five of her field goal attempts, including her four shots from behind the arc. But the senior — who is the Marquette Catholic's all-time leader in made 3-pointers — believes she and her team will be ready for a bounce-back performance in the state title game.

“I’m really excited,” Crook said. “Obviously, it’s nerve-wracking because you know it’s your last game. But I think that just adds more motivation. You gotta put it all out there. It’s a big stage, but I’m happy that we get to perform on it.”

Throughout their four years the sisters have combined for 3,895 points and won numerous Player of the Year awards, and next season Emma and Sophia Nolan will continue their careers at St. John’s. But before they suit up for the Red Storm, their main focus is to knock off Vincennes Rivet — led by senior and Indiana commit Grace Waggoner — and bring another state championship trophy back to Marquette Catholic.

“It would obviously mean the world,” Emma Nolan said. “Not only would it mean a lot to do it for the second time in a row but to do it for our senior year and all together.”

Katie Collignon, who has led Marquette Catholic to the girls basketball state final again, is one of just 12 female head basketball coaches in the Region.

The Marquette Catholic girls basketball team, which is pictured during Saturday's LaPorte semistate victory over Northfield, will attempt to beat Vincennes Rivet in the Class A state final for a second year in a row.

Marquette Catholic's Sophia Nolan shoots over Northfield’s Kearston Stout (42) and Ariel Dale in the LaPorte semistate game Saturday. Nolan scored a game-high 26 points to lead the Blazers back to the state final.