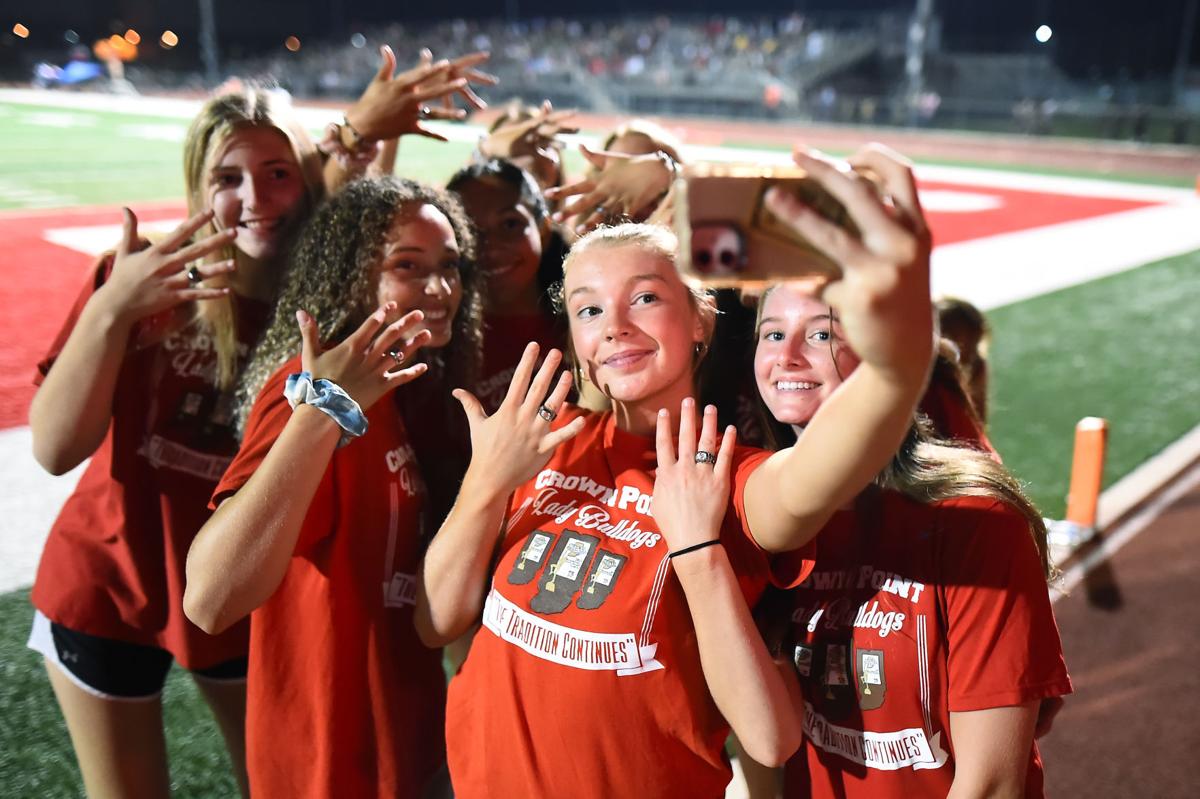 Crown Point players show off their state championship rings for a selfie after they received them at halftime at Crown Point on Friday. 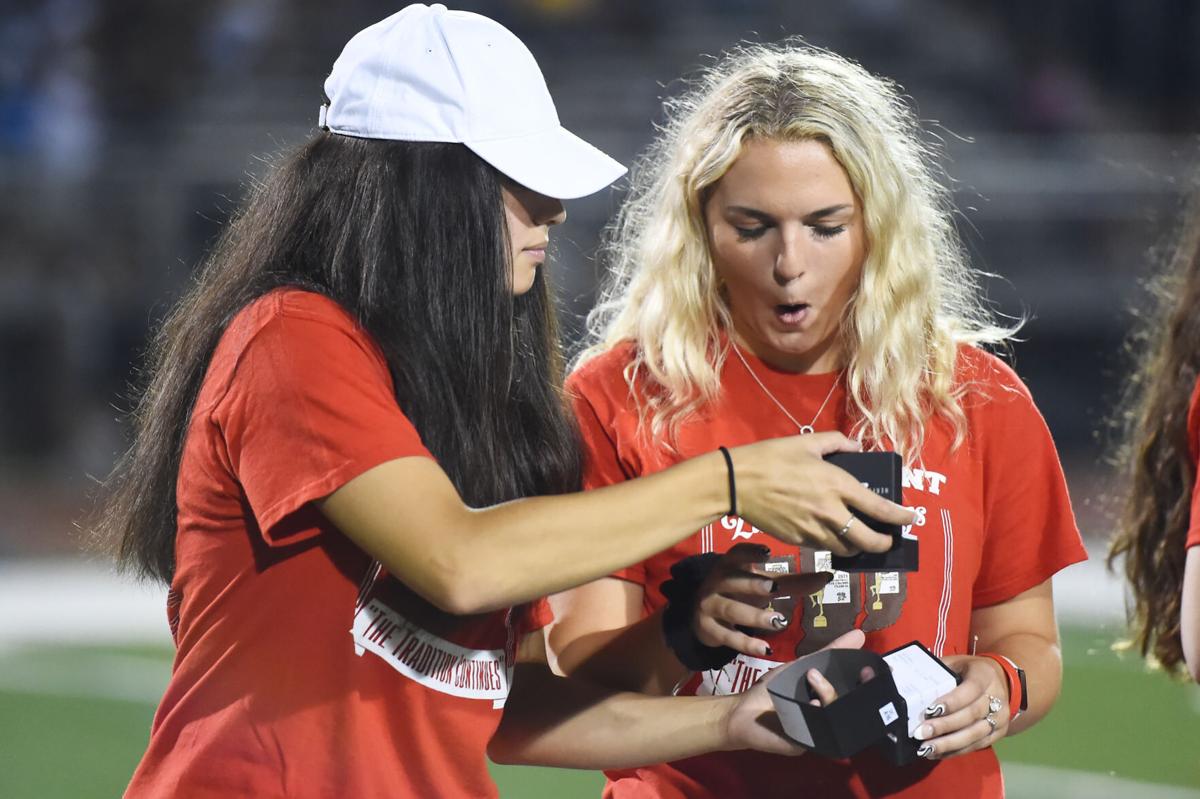 Mia Depta reacts as Jessica Carrothers opens up her ring box after the girls basketball team received their state championship rings at halftime of the football game at Crown Point High on Friday. 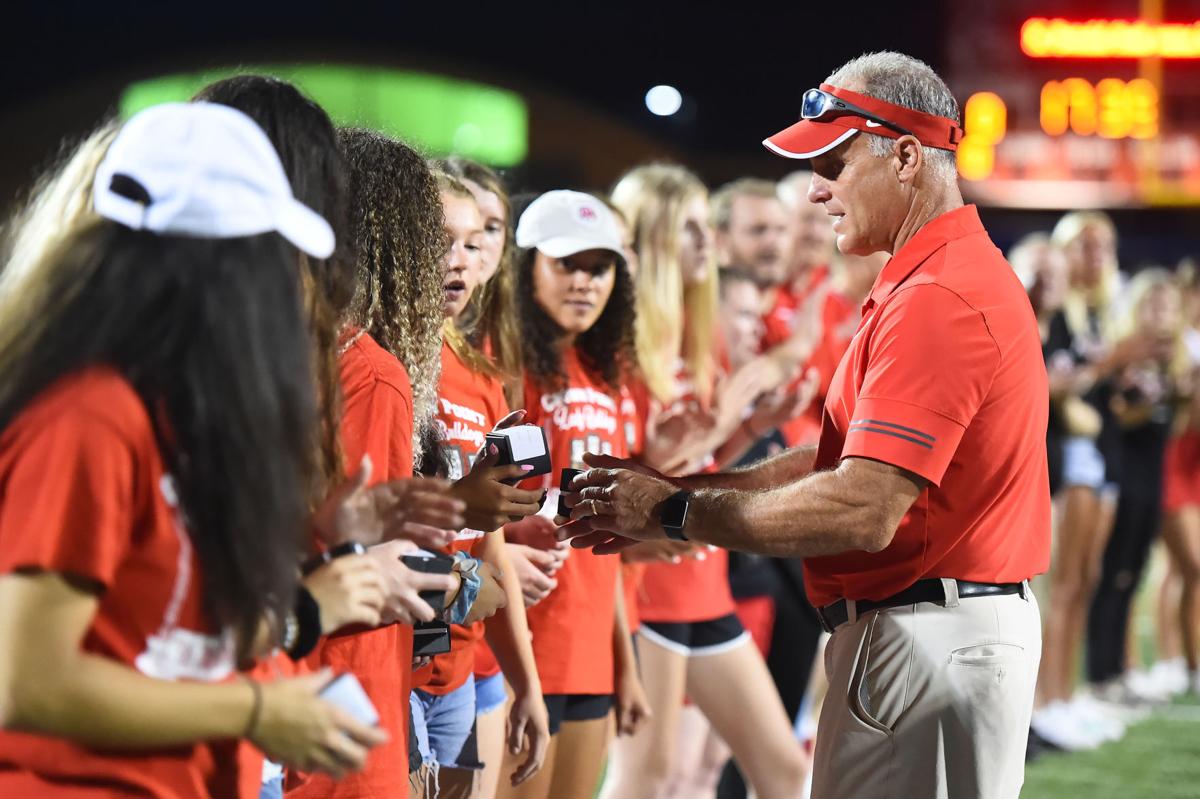 CROWN POINT — Crown Point’s girls basketball state title circle is complete after the team was officially given its championship rings Friday at halftime of the Bulldogs' football game with Andrean.

“It’s such an honor to be able to play for Crown Point basketball. All the hard work that we put into this season to get this is just really nice,” senior Nikki Gerodemos said.

Players were announced individually as they got their rings at midfield. Coaches, trainers and cheerleaders got some jewelry, too.

The group got a boisterous cheer from the Bulldogs faithful.

“They’ve been behind us throughout our whole season run, from the regular season all the way through the postseason so it’s really nice to be able to do this in front of everyone,” senior Mariana Maldonado said. “It’s really nice to see people support girls basketball.”

Coach Chris Seibert said he’ll wear the ring on special occasions but it’s more of a physical representation of the journey the team took than it is a fashion statement.

“It’s all the memories, all the hard work, all the sacrifices that everyone in this program has made to get to that point is much more meaningful than a symbolic ring,” Seibert said. “Any time you look at it, obviously you’ll think of these kids and this program.”

“It’s still surreal, even today. I’m just so proud of all the kids and all the hard work and the time and effort they put in. I’m blessed to be part of a program with such great players, such great coaches,” Seibert said. “It takes a village to accomplish something like that and I’m just so blessed to be a part of it.”

Most of the Bulldogs were present Friday, including some of the class of 2021. Seibert called it “bittersweet” to have the whole group back together.

“To have the seniors come back from college and be able to see them is a great thing to celebrate this, but it also means that we’re turning the page after tonight and moving on to the next season. We’ve got another group that’s hungry to come back and hopefully try and repeat,” he said.

Crown Point players show off their state championship rings for a selfie after they received them at halftime at Crown Point on Friday.

Mia Depta reacts as Jessica Carrothers opens up her ring box after the girls basketball team received their state championship rings at halftime of the football game at Crown Point High on Friday.