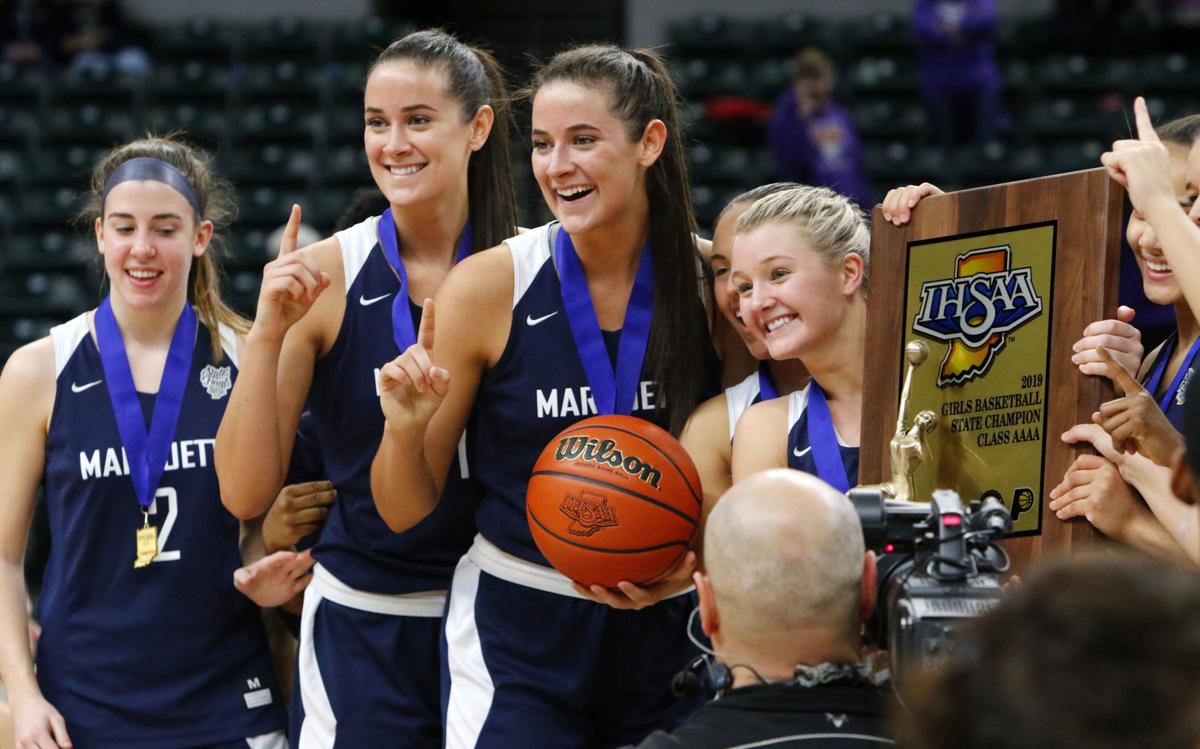 Marquette Catholic won its second straight state title behind twins Sophia (left) and Emma Nolan, who were selected as the Times' 2019 Porter/LaPorte Counties Co-Female Athletes of the Year. 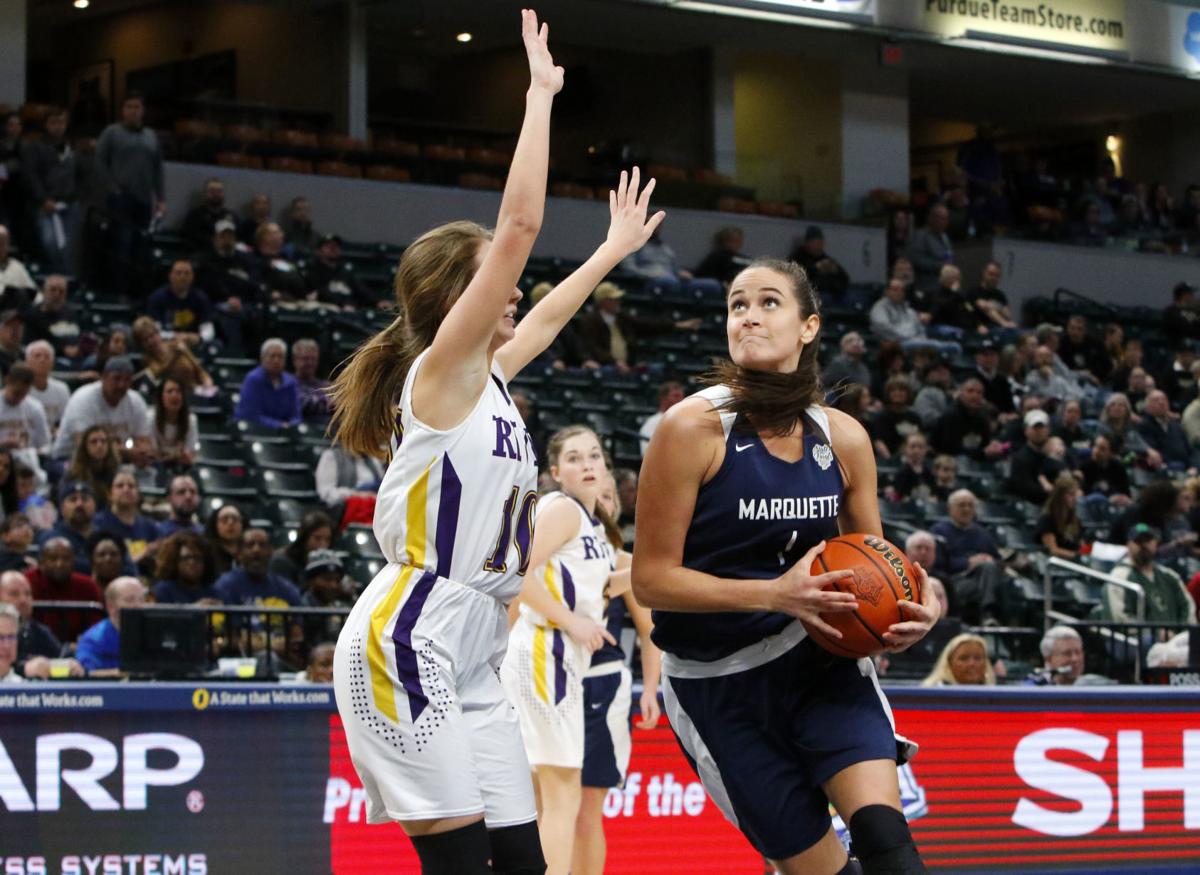 Sophia Nolan, a St. John’s recruit, had a game-high 26 points and 15 rebounds in Marquette Catholic's 57-36 win over Vincennes Rivet in the Class A state title game. 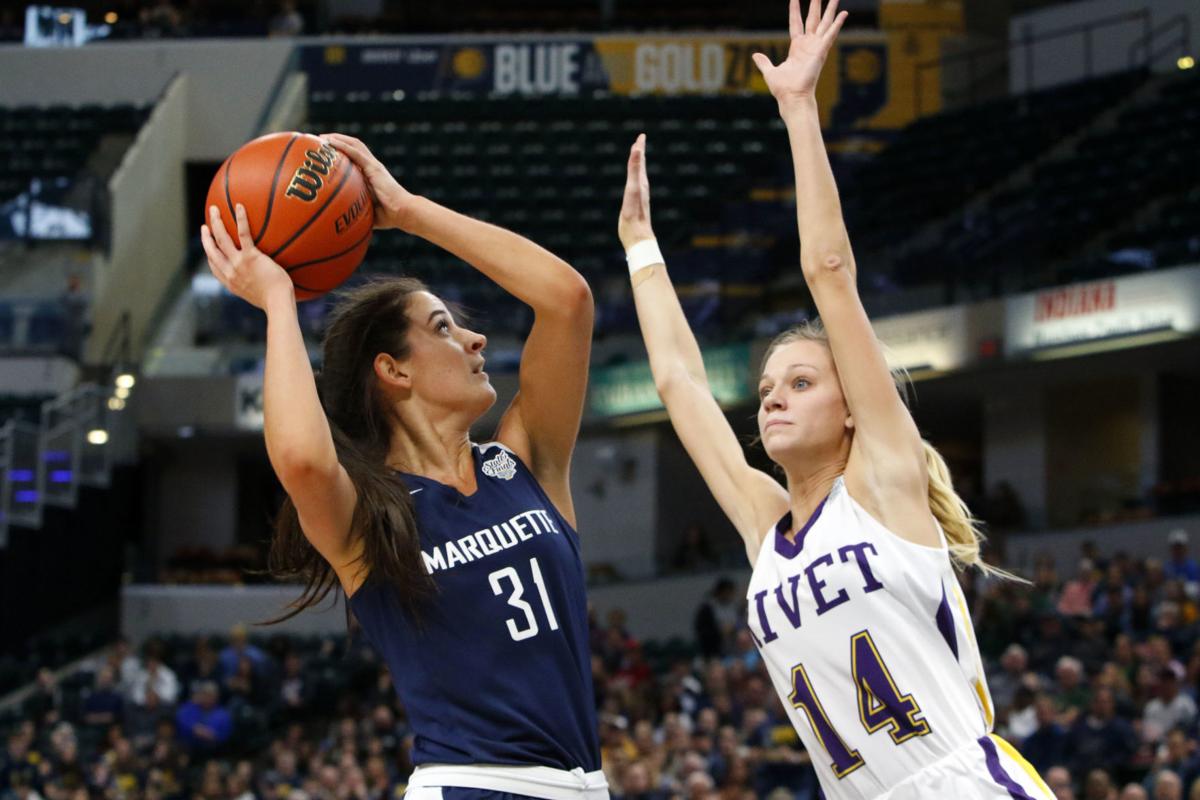 Marquette Catholic's Emma Nolan, left, puts up a shot while being guarded by Vincennes Rivet's Grace Waggoner during the Class A championship game at Bankers Life Fieldhouse in Indianapolis.

Emma and Sophia Nolan started their senior year with the end in mind.

Marquette Catholic’s standout girls basketball players had just concluded their first practice of the 2018-19 season and boldly told The Times they wanted to repeat as state champions.

There was no discussion about sectional, regional or semistate crowns. Getting back to Bankers Life Fieldhouse in Indianapolis and raising another state title banner was their ultimate goal. After a pair of remarkable senior campaigns, the Nolan twins proved their early-season objective wasn’t arrogance or an overstatement.

The Blazers finished the season 27-2 and earned a 21-point victory over Vincennes Rivet in the state championship. Sophia and Emma Nolan — The Times’ 2019 Porter/LaPorte Counties Co-Female Athletes of the Year — combined for 26 20-point games on the year and both poured in career-highs of 38 points during their last prep campaigns.

“I think the best part of senior year was watching everyone grow as a person and a player and being able to see how much we’ve all improved over the years,” said Emma Nolan, who is Marquette Catholic's all-time leading scorer. “We all had that same drive, knowing that every day we were going to give it our all and just play hard.”

In the state title game, Sophia Nolan also scored a game-high 26 points and nailed all four of her 3-point attempts, including three in the third quarter. Months after leaving Indianapolis victorious, she still gets overwhelmed with joy whenever she thinks about what Marquette Catholic was able to accomplish.

She believes it is an achievement that will stick with her forever.

“Winning a state championship was pretty much the highlight of my senior year,” said Sophia Nolan, who played in a state-record 112 games throughout her high school career. “It’s just crazy to think that we left our legacy and now it’s their turn to leave theirs.”

Blazers coach Katie Collignon said she will miss having Sophia and Emma Nolan around because they helped push the program to new heights and brought the best out of her. She enjoyed coming up with new gameplans and schemes to utilize the twins’ versatility and despite never losing a home game in their prep careers (33-0), she constantly reminded them that it wasn’t enough to just dominate in high school.

As a former point guard at Ferris State and women’s basketball assistant coach at Valparaiso University, Collignon understands what it takes to be a successful college athlete. She worked tirelessly to help the twins broaden their perspective and before they left to continue their careers at St. John’s, this summer Collignon was still putting the girls through 90-minute training sessions three times a week.

She is confident Sophia and Emma Nolan’s size and shooting ability will be valuable assets for the Red Storm in the Big East and that their work ethic set an example for all returning and future athletes at Marquette Catholic.

“I think they showed that if you’re focused and you have a goal, you can achieve it,” Collignon said. “A lot of times kids get into high school and it’s a real shock to them how hard they have to work. But Emma and Sophia always had that focus level and that drive, and everyone around them saw that and how motivated they were.”

The twins have only been in New York for a couple of days, and St. John’s coach Joe Tartamella said he’s excited to get them and the rest of the freshman class implemented into the program. He and his recruiting staff first noticed the twins a couple years ago when they were playing AAU basketball and were impressed with their well-rounded skill sets.

Tartamella also pointed out that both girls — who were The Times’ 2018 and 2019 Girls Basketball Co-Players of the Year — have high character and winning pedigrees, which can only help their transition to the Division I level.

“I think the way they compete is how they approach life in general,” Tartamella said. “They’re always making sure that they’re helping or adding value to any situation they’re a part of, and I think you see that in their ability to communicate and their leadership.”

Marquette Catholic's Nolan twins, the Times' Co-Players of the Year, lucked out by choosing basketball

Emma and Sophia Nolan led Marquette Catholic to back-to-back state championships, but their parents didn't always see a future for them in basketball.

Sophia Nolan scored 26 points and grabbed 15 rebounds the Blazers rolled to their second straight Class A state title with a 57-36 win.

Marquette Catholic won its second straight state title behind twins Sophia (left) and Emma Nolan, who were selected as the Times' 2019 Porter/LaPorte Counties Co-Female Athletes of the Year.

Sophia Nolan, a St. John’s recruit, had a game-high 26 points and 15 rebounds in Marquette Catholic's 57-36 win over Vincennes Rivet in the Class A state title game.

Marquette Catholic's Emma Nolan, left, puts up a shot while being guarded by Vincennes Rivet's Grace Waggoner during the Class A championship game at Bankers Life Fieldhouse in Indianapolis.