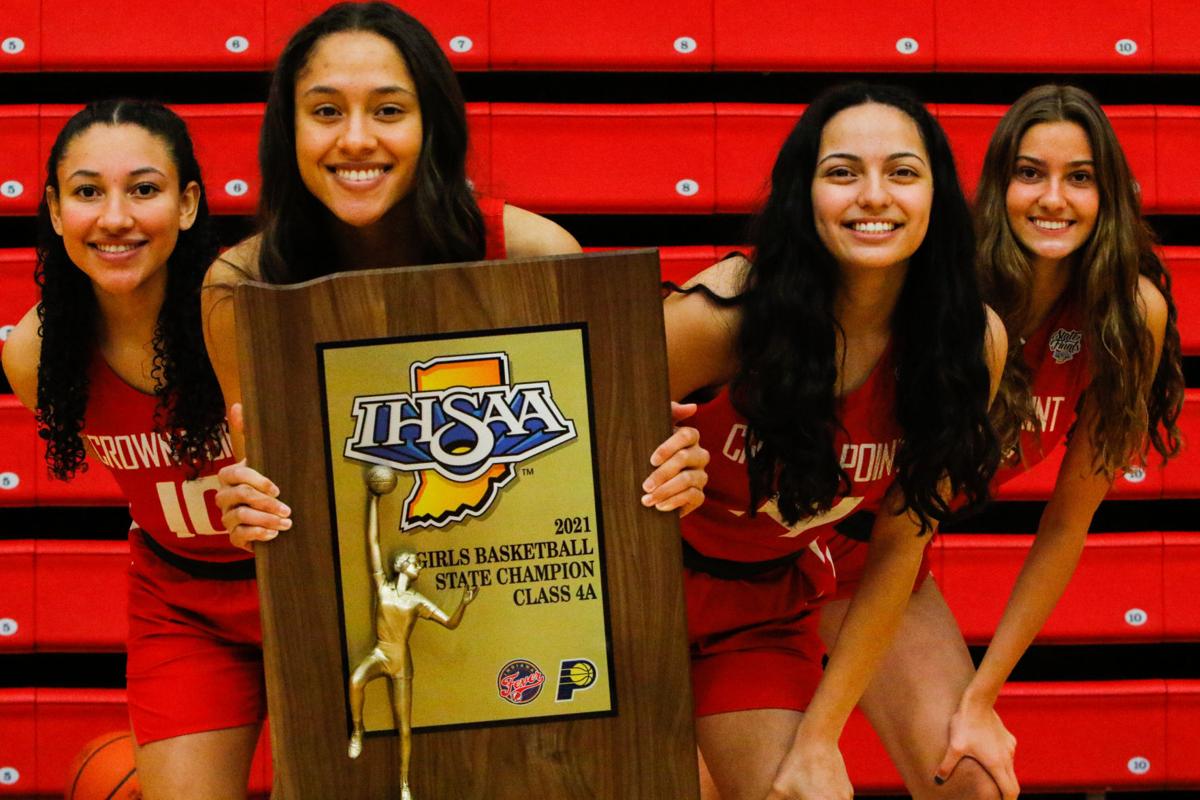 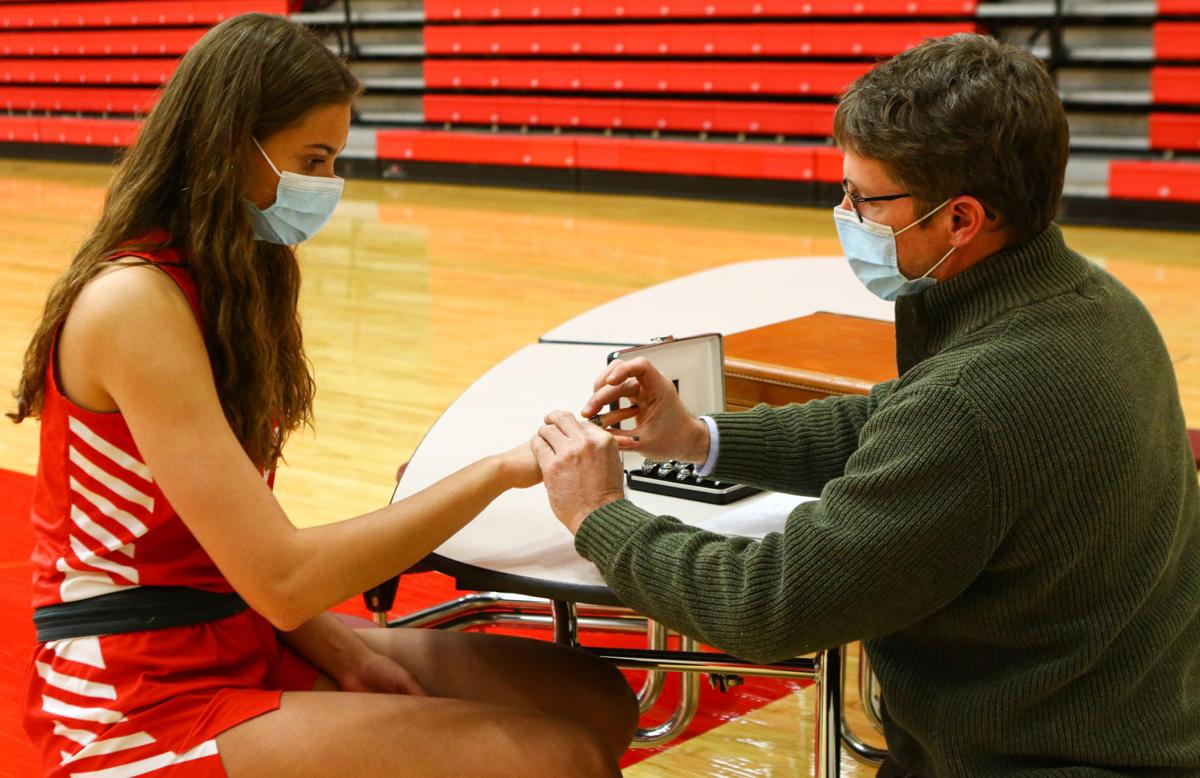 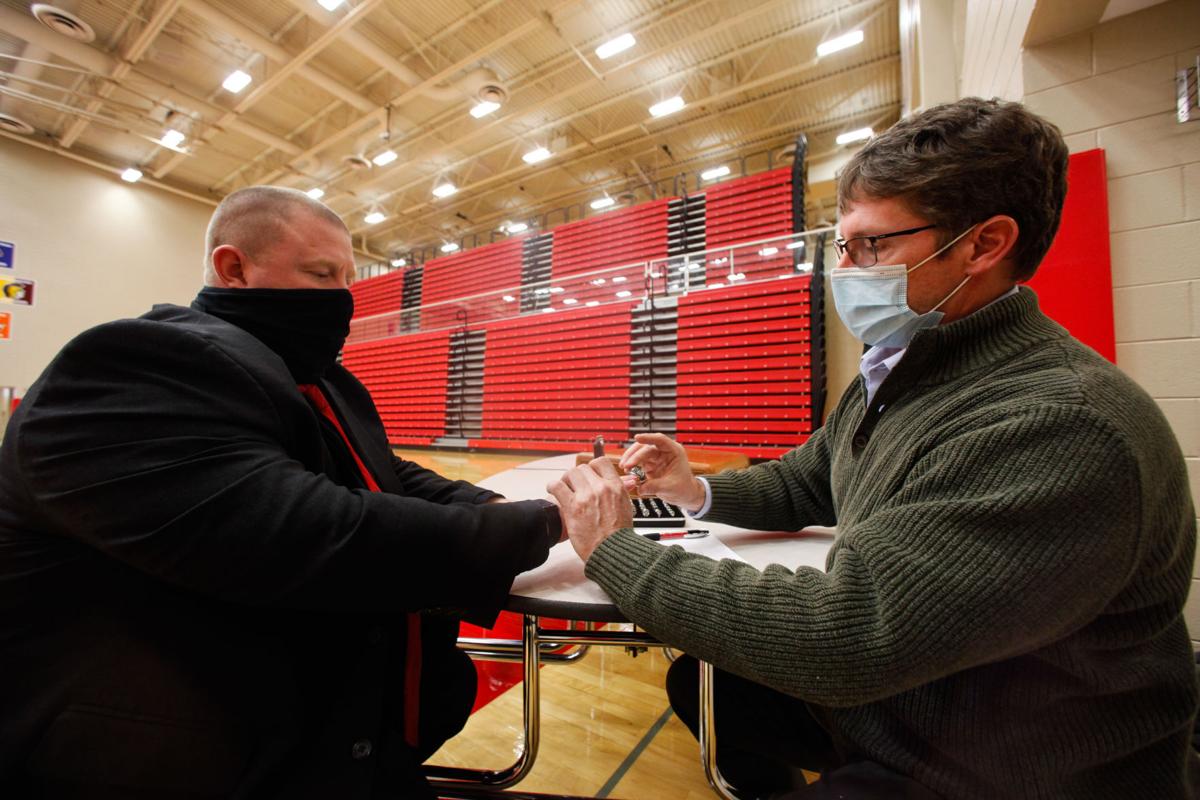 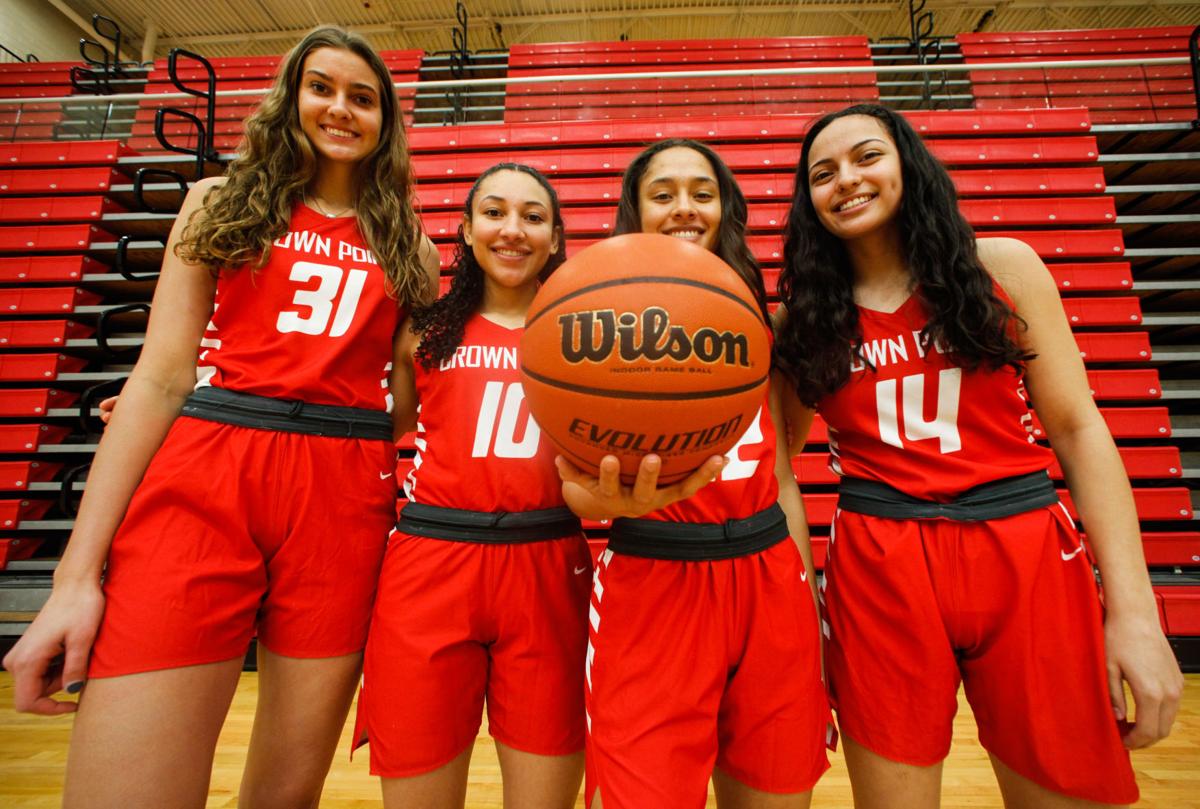 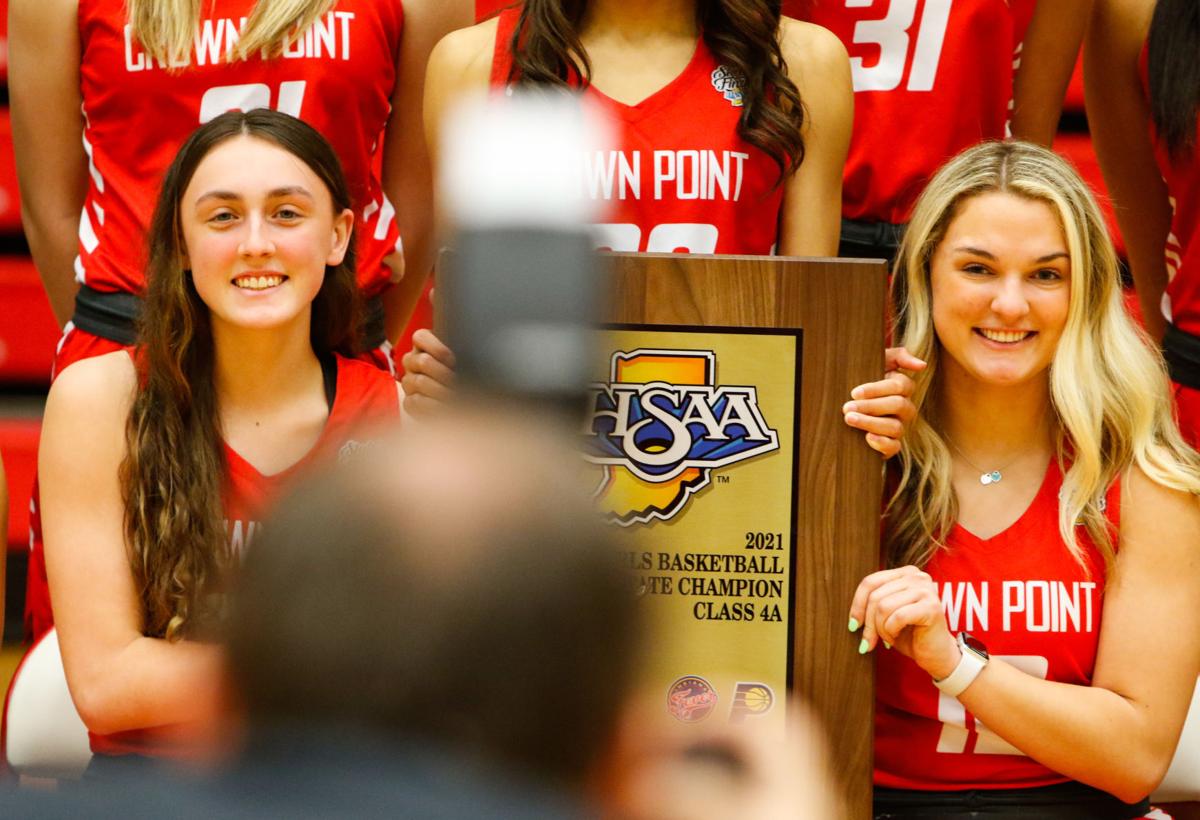 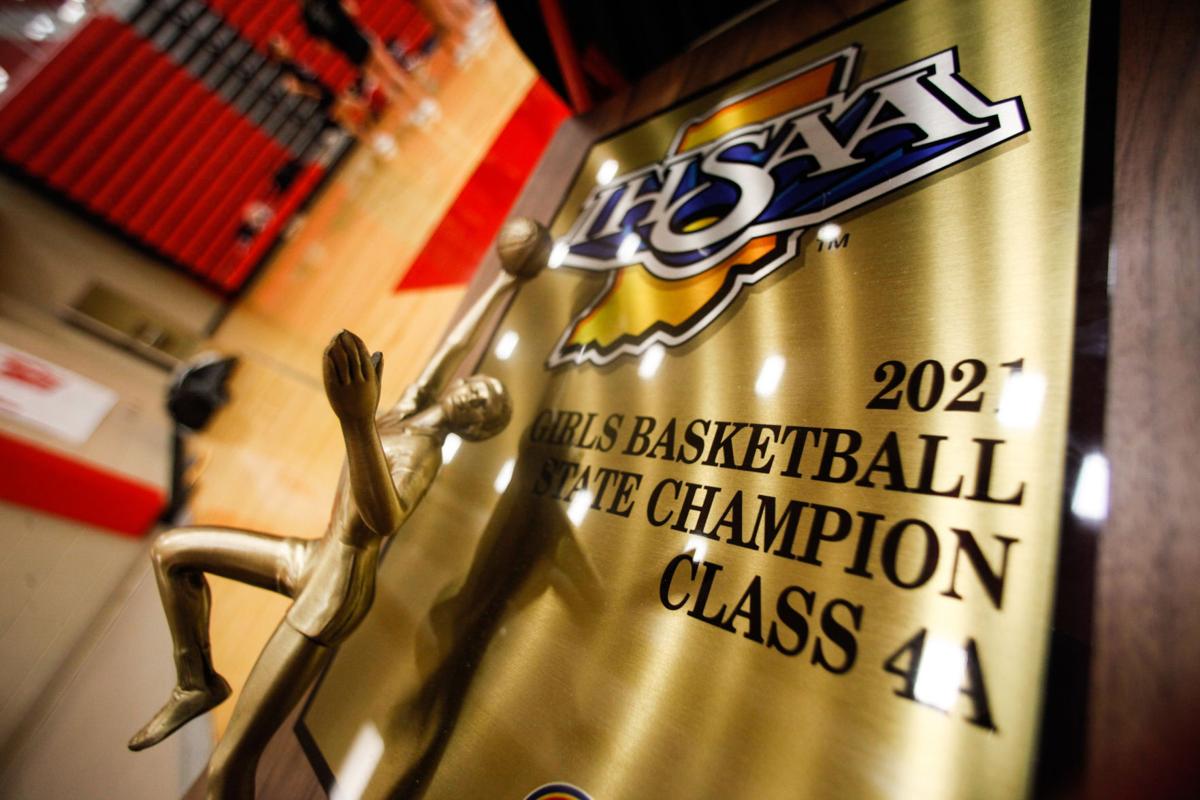 CROWN POINT — A Division I recruit and do-it-all guard who can get anywhere she wants on the court and finish with a variety of shots or passes that set up teammates. A post player who patrols the paint and rebounds so well to go with a soft touch that she already has accepted a scholarship offer to Purdue.

That’s a nice place to start for a team in pursuit of a state championship, but according to the coach and best players from Crown Point, winner of the 4A championship with a 25-1 record, their skills just start to explain why the Bulldogs were crowned state champions.

Jessica Carrothers averaged 22.3 points per game. Lilly Stoddard contributed 10.7 points, 9.1 rebounds and 2.3 blocks a game. The two juniors and sisters Alyna, a junior, and Alyvia Santiago, a senior, insist that all 14 members of the team made key contributions, even those whose participation was limited to practice.

They offered proof toward their point without even trying to do so when each was asked separately to name her most unselfish teammate. They mentioned five different names.

“The most unselfish teammate is definitely Allie Govert,” Alyna Santiago said. “She never really cared about how much she scored. She always cared about what was best for the team. We had a ton of players like that, but she was in my opinion the most unselfish.”

Alyvia Santiago offered a different answer: “Jessica (Carrothers). She could score if she wanted on any possession and she still passes.”

Stoddard’s choice: “My most unselfish teammate would be Lyna (Santiago). She’s always looking for the extra pass, just for the best shot for our team, and that really helped us throughout the season.”

Carrothers, who scored 25 points in the 44-34 title-game victory vs. Brownsburg, had trouble picking one and settled on two: “Nikki (Gerodemos) or Alyvia (Santiago). Even if they have a shot, like if they’re wide open, they still look to pass it.”

Carrothers, Stoddard, the Santiago sisters, Gerodemos and Govert played most of the minutes in big games, but the contributions of the rest in uniform were not lost on anyone.

Stoddard shared how much she appreciated Marianna Maldonado’s contributions.

“Mariana’s a really aggressive player,” Stoddard said. “She’d always drive in practice, and that helped us make sure we’re all on help side. And in the state game, it was great hearing her cheering us on.”

Stoddard on Ali Rawls: “She’s a really nice girl. She was great in practice at making sure everybody was doing what they’re supposed to be doing.”

Alyna Santiago offered a tidbit that showed how Zoey Wells improved the conditioning of the entire team: “Very fast, someone you never wanted to run next to in sprints just because of how fast she is, and a very good teammate, very positive.”

She also spoke to how McKayla Henry, who made Stoddard better by battling her daily in the post, made everyone more prepared for games.

“McKayla’s very strong,” Alyna Santiago said. “She would set screens on us in practice, and we would all just fall because of how strong she is. Very, very, very tough practice player and probably one of the funniest girls on the team.”

Alyna cited Mia Depta as “a very positive, good leader, a senior who always gave help to the younger girls who needed it,” and praised Emily Phillips for “being a really good competitor and did some good things for us in the game. She was always ready to shoot.”

Brooke Lindesmith was sidelined by a knee injury, but still attended practices daily and, according to Carrothers, “makes basketball fun. Everyone loves her, being around her, she’s just fun to be around.”

Ava Ziolkowski, according to Stoddard, is “a great shooter and a really big defensive presence and rebounds well.”

Bulldogs coach Chris Seibert said every player on the roster was invested in the team first.

“It’s the teams that play together and play for the right reasons that was a big part of our success,” Seibert said. “Each player felt valued. Each player felt like she had a role.”

It all added up to memories they never will forget.

“The one moment that really stuck out for me was just the last few seconds of the state game,” Stoddard said. “I was watching the clock count down, knowing we were going to be the state champs. That was a crazy feeling.”

Lake Central knocked off powerhouse Penn on Nov. 13 and has cruised by Hammond Central, Bishop Noll and Hanover Central so far

After playing only conference opponents during a pandemic-delayed spring season, TF South has mapped out a schedule that includes only one home game before January.

Here is a team-by-team look at the Porter County Conference teams entering the 2021-22 season.

Freshman Kylie Wells off to fast start for Merrillville

Kylie Wells scored a game-high 25 points on 9-of-13 shooting to lead Merrillville in its 65-43 win against rival Andrean.

After the graduation of Courtney Blakely and Taylor Austin among others, new stars figure to emerge in the Greater South Shore Conference.

Check out the top players and outlooks for independents and other girls basketball teams in the area.

Kelly Kratz is exactly where she wants to be.

Jessica Carrothers and Lilly Stoddard aim to bring back another Class 4A state championship to Crown Point.

Coach Okeisha Howard threw herself into the middle of the action as soon as her Hammond Central players took the floor ahead of their opener.