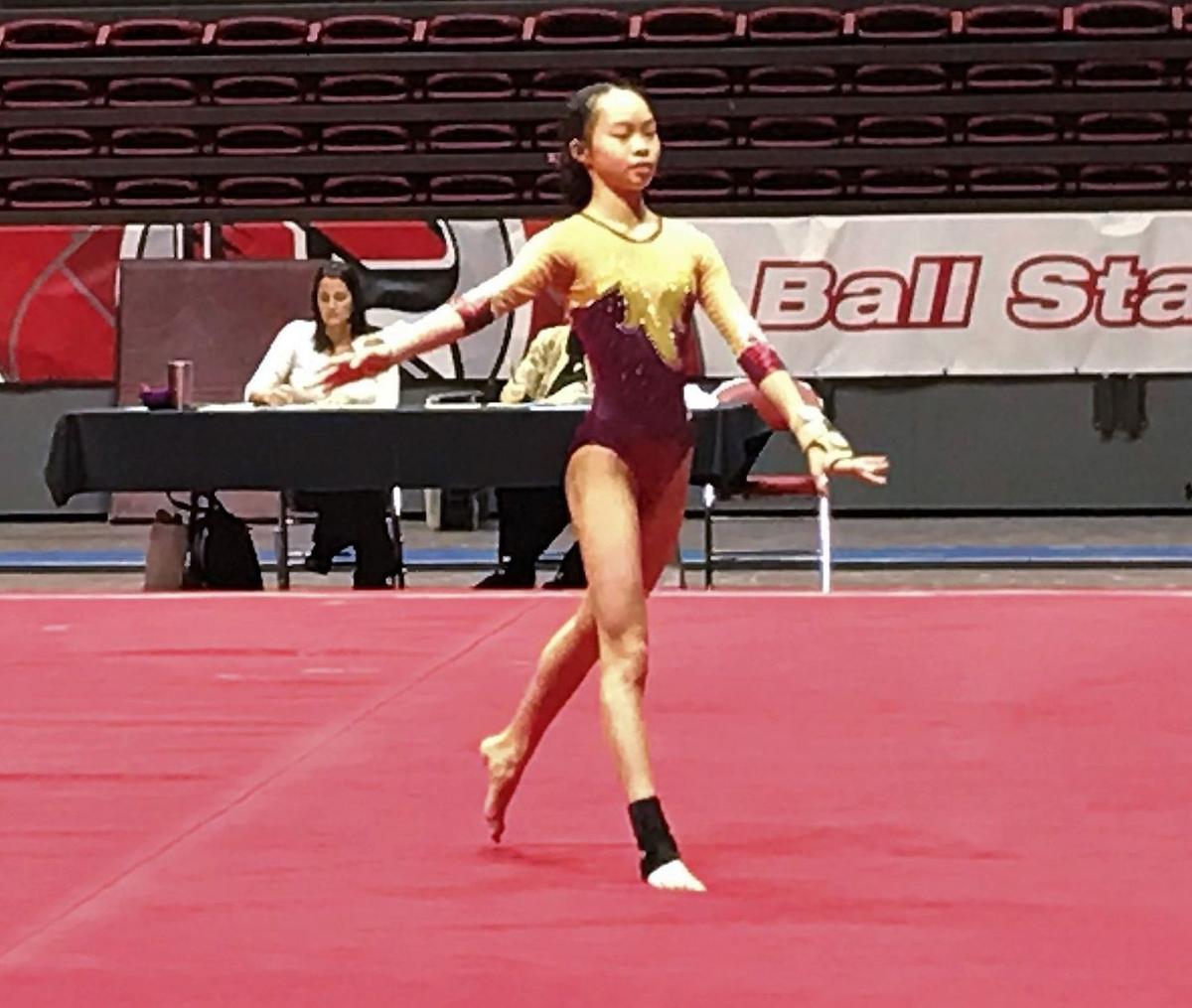 The big stage of Ball State's Worthen Arena proved to be no big deal for Chesterton's Sophie Hunzelman, who won the all-around title with a 38.2 at Saturday's state gymnastics finals at Worthen Arena.

"She's such a calm, cool and collected little girl that she just handles it all in stride" Chesterton coach Dawn Matthys said. "After our shaky start on beam, she came through with a beautiful routine for us. Everything just fell into place for her (Saturday).

"That was her best vault all season and after the music issue on her floor routine the first time, she got to re-do it and performed beautifully. She topped it off on bars and I just couldn't have asked for a better day from Sophie."

Taking first was a surprise for Hunzelman in the all-around, because she had heard differently.

"My dad heard it floating around that I was third, so I was really surprised," Hunzelman said. "Of course winning it was in the back of my mind and I wanted to win it, but I wasn't expecting it with so many other good gymnasts out there. I just wanted to it all of my events and make everything clean and do my best."

Hunzelman placed in every event but floor, where she had a 9.3.

"We started off on beam a little rocky, so I wanted to stay on for my team," she said. "It's my first state meet and it was a little nerve-wracking having to start on that, but I told myself 'you've done this 1,000 times, you know what to do.' My teammates helped me a lot."

The idea of winning all-around became very real for the frosh with one event to go.

"After my third event, vault, I knew I had one more event to go and I was doing well," she said. "At that point, I was just hoping to make a clean bar routine. I knew what I had done and knew what I needed to do."

Bush battles back to place in all-around: Following a rough go for herself and the team on beam, Chesterton's Jordan Bush knew she and the team to pick things up.

The sophomore managed to recover to the tune of a sixth-place finish in the all-around.

"We did as much as we could after beam," Bush said. "After beam, Dawn looked at me and told me to get my team together and I tried to do that as much as I could. Considering where we started and seeing where we finshed, it's actually pretty astounding.

Osorio gets by with a little help from her friends: For Merrillville senior Heather Osorio, it was a struggle in her junior year as she competed as an individual and throughout her senior year as she battled a shin injury.

With her team behind her in her final go-round, Osorio secured a sixth- place medal on her bars routine, scoring a 9.55.

"It was a night and day difference," coach Diane Roberts said. "We thought starting on bars wouldn't be ideal for placing high in that event, but she stuck it out. She gutted it out from event to event and by the time she got to vault, she had nothing left and couldn't get anything out of the board.

"We're thrilled she medaled on bars and she's now in the our athletics hall of fame because of it. It was icing on the cake for the four years she's given to our program."

Starting on bars wasn't ideal for Osorio, but she took it in stride.

"It's always hard starting on your best and favorite event," she said. "It's my senior year, so there was no question I was going to do my full and a half layout, it was go big or go home. I hadn't been practicing it but it was my last meet, so I knew I had to make it count."

For Osorio, she credited that aforementioned team to her success.

"It could've been way better overall, of course, but I'm so glad that I got to finish off here with my team, most importantly," she said. "This is the best year I've had since my freshman year and my team is a major reason why I did so well."

MUNCIE — The tradition of excellence continues.