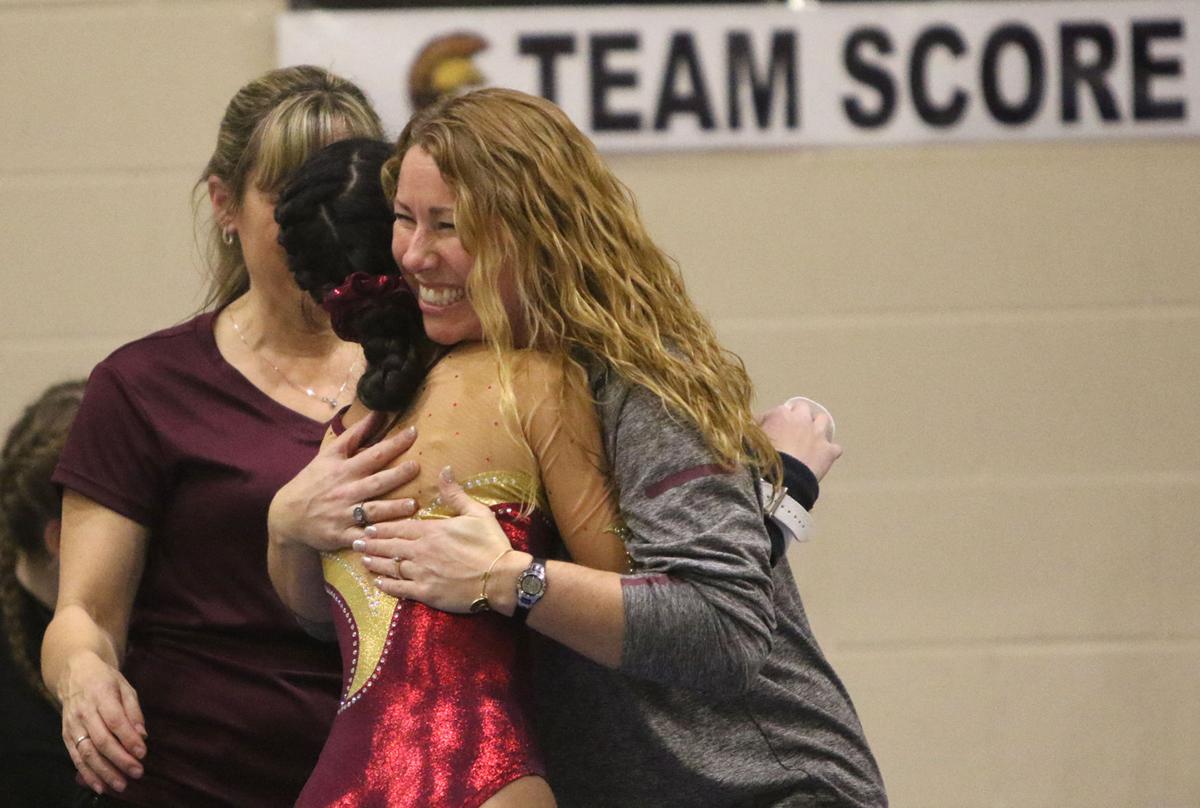 Chesterton's Sophie Hunzelman, left, is congratulated after competing on the bars Saturday at the Chesterton Sectional. 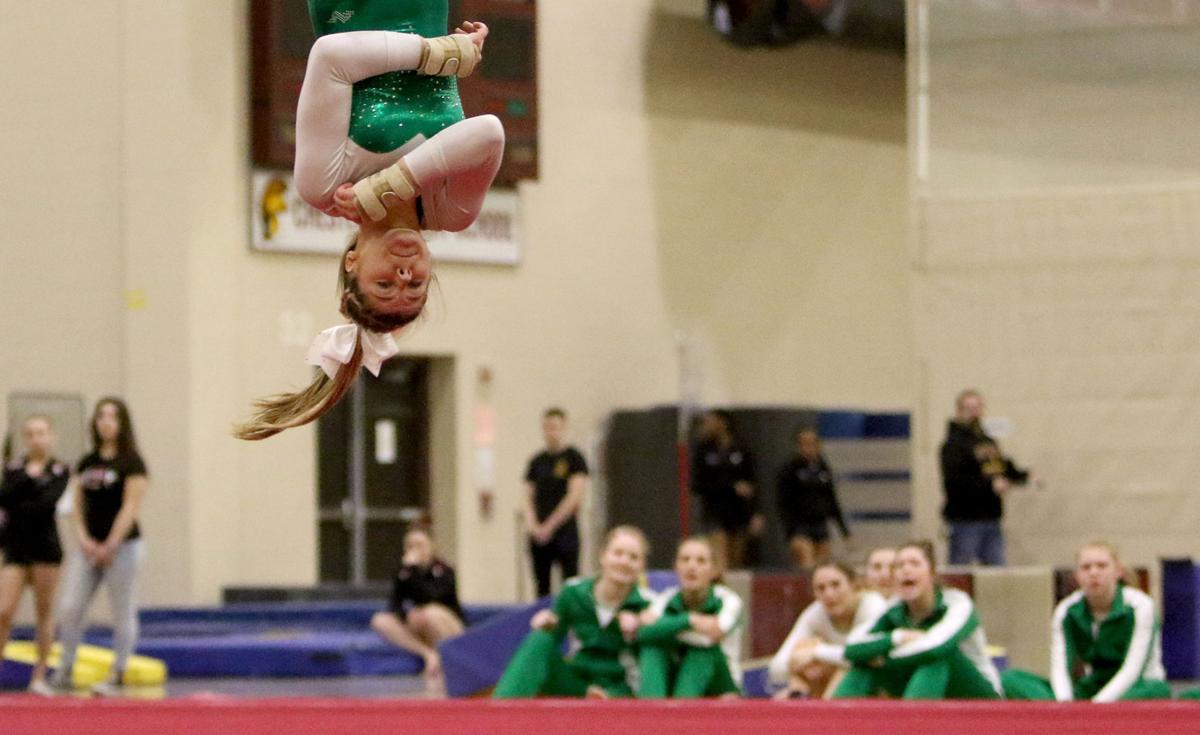 Valparaiso's Jenna Algozine competes in the floor exercise Saturday at the Chesterton Sectional. 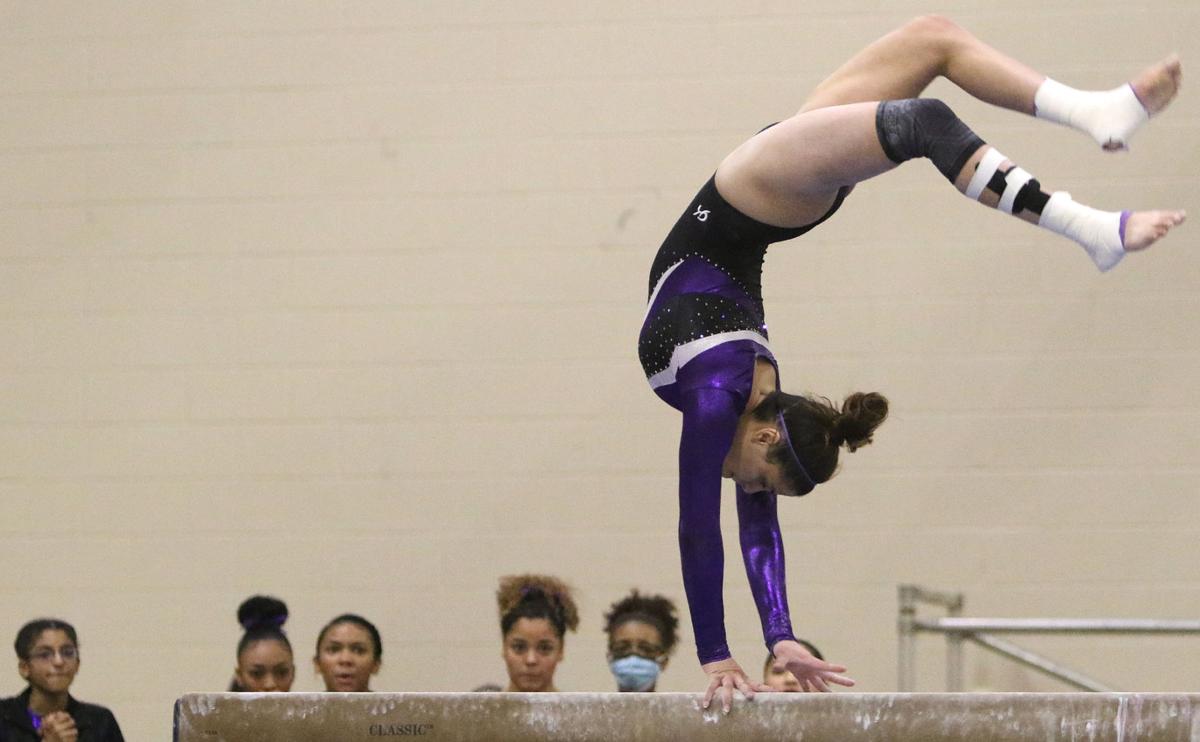 Merrillville's Heather Osorio competes on the beam Saturday at the Chesterton Sectional.

CHESTERTON —  For the last 13 years, Valparaiso has reigned supreme in the sectional.

Top-ranked Chesterton halted that reign, as the host Trojans scored a 113.525 to secure their first title since 2003.

"Oh my gosh, it's a great feeling," Chesterton coach Dawn Matthys said. "This team is extremely talented and it's an honor to coach these girls because they work so hard. We've been undefeated all year, so it's great to stay in that same spot."

"We had to count a fall on beam, at least one bar routine wasn't what it should be and two vaults came out a little weaker than usual. We'll need a little clean up on beam and vault, but other than that, we just need to keep maintaining."

The Trojans were led by Sophie Hunzelman, who placed first in the all-around (38.4) with firsts on bars (9.65) and beam (9.725). She was second on floor, behind teammate Jordan Bush who scored a 9.65. Whitney Siewin posted a 9.5 to win vault, her lone event. The Trojans swept the top spot on the podium in each event.

"A stellar performance by Sophie," Matthys said. "It's almost like her and Jordan take turns who's going to win the all-around. Whitney Siewin has been working her tail off on vault, too. She did her best vault I've ever seen her do (Saturday)."

"Beam is always one of our stronger events, but we had to then count a fall on beam," Matthys said. "When we got to floor, we stepped up and the girls really performed."

For runner-up Valparaiso, Jenna Algozine scored a 37.95 for a second in the all-around. She tied for second on beam and for third on bars and vault. Whitney McKeon was fourth in the all-around, finishing second on vault. Valpo will attempt to win its 10th consecutive regional next Saturday.

"This was the best time ever to peak and have our highest team total so far," Merrillville coach Diane Roberts said. "Our team goal has been to hit a 110 and we've told them since day one that we were a 110-plus team. We just have never had a perfect meet and today we went 16-for-16 and that was awesome. We didn't have a lot of kids in the podium, but it was enough to keep us alive."

Heather Osorio paced the Pirates' attack with a third in all-around (37.425) with a second on bars (9.55). The senior continues to grind her way through a leg injury and limited practice.

"The skills she did today she hadn't done in a week," Roberts said. "She's a great enough athlete though where she can go out there cold and just get it done."

While Roberts had her doubts about Osorio attempting her bars dismount, there was little doubt on Osorio's side.

"I knew if I could pull through, it'd be great for all of us," Osorio said. "She (Diane) said not to do it at first and then she said I could consider it, so I decided to do it. She was nervous, I wasn't."

The Pirates advance to the regional for the first time since 2014.

"I'm running on a lot adrenaline right now, I'm trying not to lose it yet," Osorio said. "It was a great meet for all of us, it feels amazing. I've been waiting for this moment since freshman year. The last two years were tough going alone and to now go as a team, it's the best feeling."

Drake making the jump for Portage

PORTAGE — The jump in Michaella Drake's scores has been an obvious one as she's came into her own as a gymnast.

Smith a star in the making for Pirates gymnastics

JIM PETERS: Region gymnasts hoping to do the old one-two at state

In the early days of Indiana prep gymnastics, when only the regional winner advanced, just one Region team qualified for the state finals.

CROWN POINT — Crown Point senior Shannon Harrison was always doing flips and and hanging around on the park's monkey bars.

Chesterton's Sophie Hunzelman, left, is congratulated after competing on the bars Saturday at the Chesterton Sectional.

Valparaiso's Jenna Algozine competes in the floor exercise Saturday at the Chesterton Sectional.

Merrillville's Heather Osorio competes on the beam Saturday at the Chesterton Sectional.