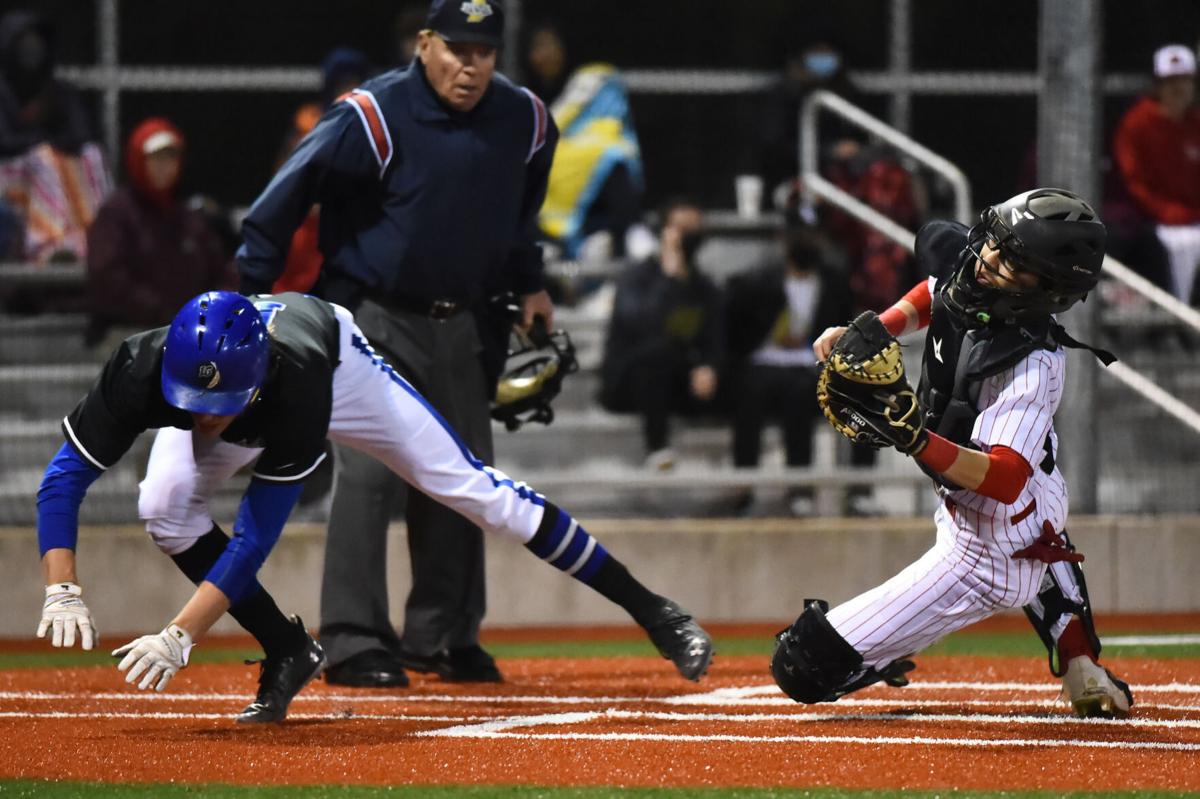 Munster catcher Evan Wittkamp holds on to the ball after tagging Lake Central’s Carter Doorn out at home in the fourth inning at Munster on Friday. 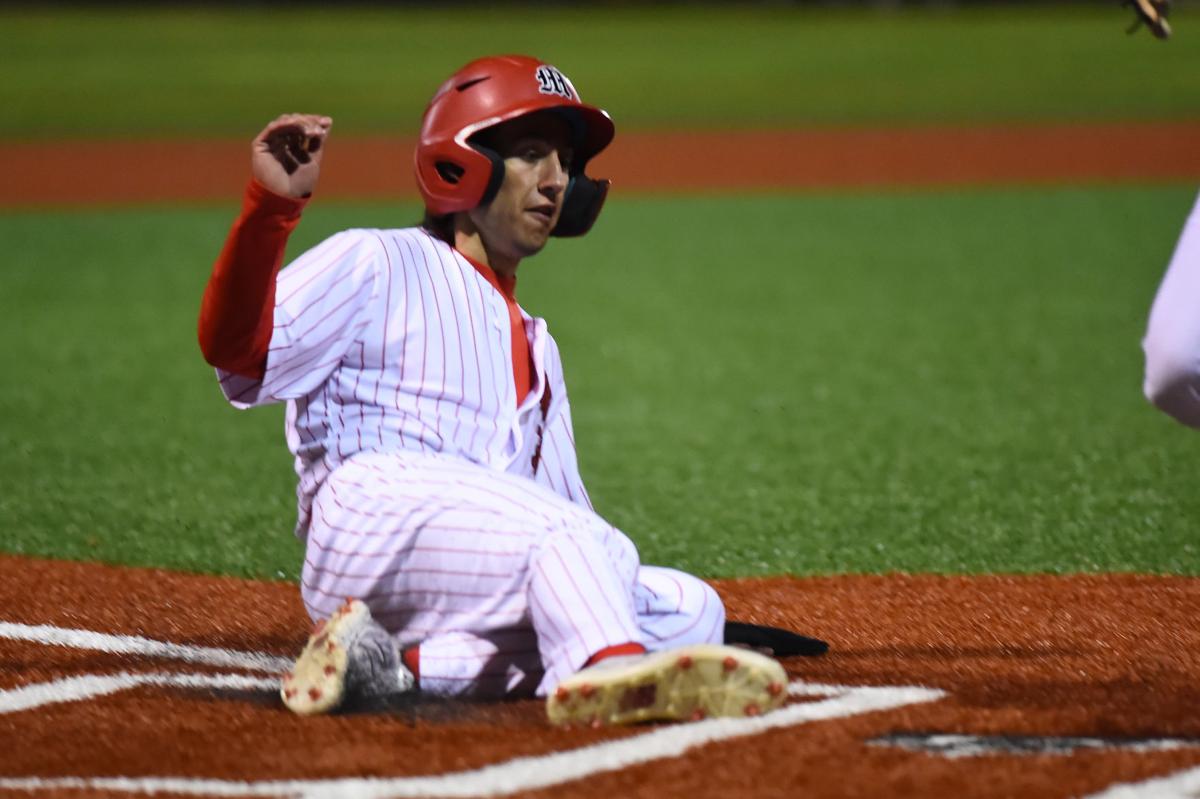 Munster’s Chris Iatrides slides in safe home on a passed ball to break the 2-2 tie in the fourth inning against Lake Central at Munster on Friday. 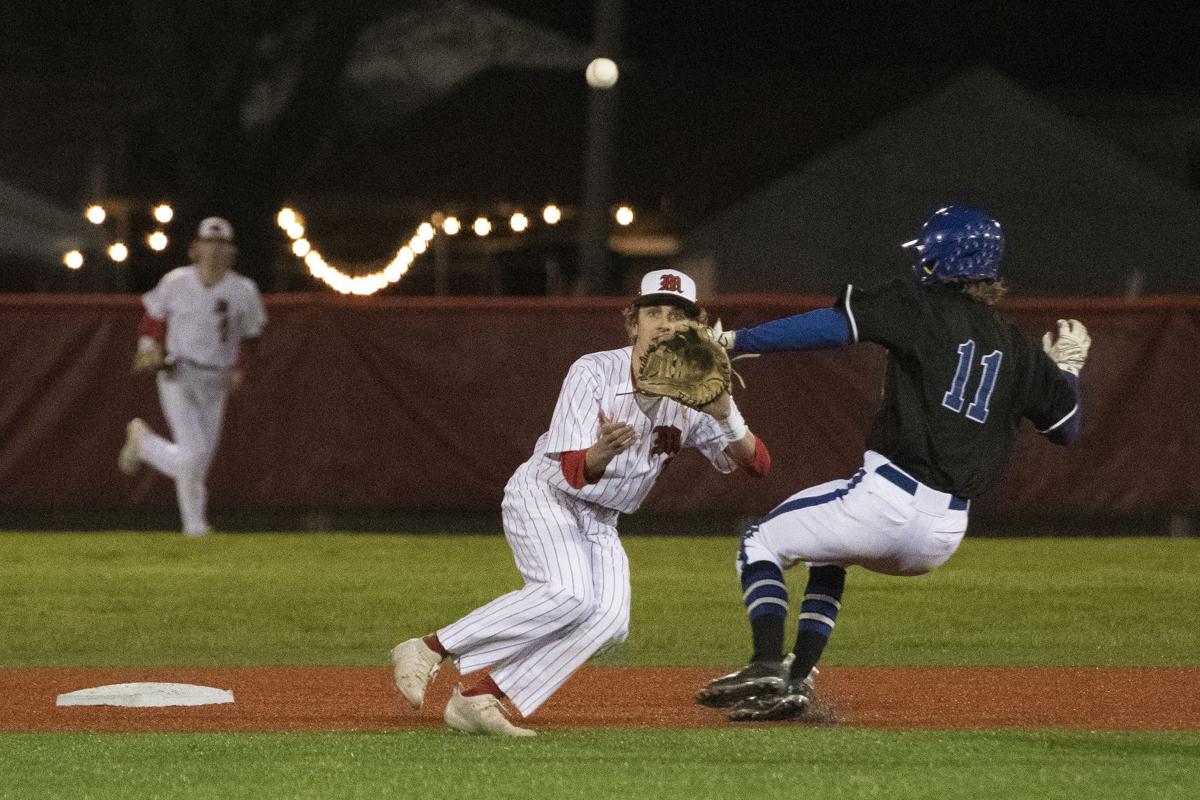 Munster’s Ben Greiner takes the throw to second as Lake Central’s Carter Doorn comes into second base in the fourth inning at Munster on Friday.

MUNSTER — In a nonconference game between perennial Region baseball powers Munster and Lake Central played under Friday night lights at Mike Niksic Stadium, the only thing missing was a spotlight to shine on multiple players so they could take bows for their standout plays in the field.

The only fitting end for a game crisply played would be for it to come on a spectacular defensive play, and that’s precisely what happened.

Munster left fielder Denham Kozy gunned down the would-be tying run at the plate after digging the ball out of the corner and lofting a high throw to catcher Evan Wittkamp, who efficiently placed the tag, sealing it for Munster, 3-2, vs. visiting Lake Central.

“You guys need to calm down,” Shinkan told the deaf ears in the dugout.

Adrenaline was flowing too swiftly through Kozy for him to do anything of the sort.

“We proved a lot of people wrong tonight,” Kozy said. “The Mustangs are underrated. We need to be talked about a lot more. We are hot right now. We are the hot team in the Region, so people have to watch out for us.”

The game and the throw will be talked about for some time by everyone in attendance.

Hunter Snyder, who in the first inning had doubled and scored on a double by the next batter, Connor Misch, came to the plate in the seventh with two outs and a runner on first and Lake Central leading by a run. The left-handed-hitting Snyder hit a high opposite-field fly that tailed toward the line.

Kozy covered a lot of ground swiftly, dug the ball out of the corner and let it rip.

“I hurried up and got over there, bobbled it a little, saw the runner going and I figured let it eat, chuck it down there, let it go,” Kozy said.

Said Wittkamp: “When he let that throw go, I saw it was high. I didn’t know if it was going to sail over me, so I kind of waited for it, and once I saw it was coming to me I knew we had him. Great throw. Great throw.”

Lake Central coach Mike Swartzentruber second-guessed himself for sending the runner with Misch, the No. 3 hitter, up next, but given what a spectacular play it took to secure the out and the victory, nobody else seemed to share that sentiment.

“He digs it out of the grass over there and he just let it fly,” Shinkan said of the game-saving play. “Naturally, I would have sent the runner myself, too. He just threw a strike to home plate and that’s the ballgame.”

Swartzentruber said even as he waved the runner home the thought crossed his mind about who was in the on-deck circle. He was still thinking about it after the game, slumped over the dugout rail, staring at the ground.

“(Kozy) was playing so far in the gap and our runner was around third and he’s just picking up the ball,” Swartzenruber said. “He just made a hell of a throw. As a third-base coach you’re timing distance. You’re timing where he is around the bag. I liked it, but … reflecting now I wish I hadn’t sent him, obviously.”

This was a game not lost by a third-base coaching decision, rather won by the last in a series of terrific defensive plays.

After Lake Central took the first-inning lead on back-to-back doubles, Munster turned two walks, a throwing error, a wild pitch and Bryce Schaum’s run-scoring single to center to take a 2-1 lead in the bottom of the first.

Then the theme of the night, standout fielding, emerged.

A cold night heated up when a trio of web gems from three different outfielders drew roars from the crowd early.

Munster right fielder Tyler Lukowski started the leather show when he robbed Peyton Gard of extra bases for the second out of Justin Bobb’s 1-2-3 second inning. Sprinting toward the line knew the only shot he had at getting leather under the sinking line drive would be to lay out. So he went horizontal and made the highlight catch inches before the ball found the turf.

It didn’t take long for Lake Central (12-5) to return the favor. Leading off the bottom of the second, Wittcamp was robbed of extra bases when center fielder Jerry Edwards broke in the right direction with the crack of the bat and ran down the hard-hit flyball in right-center for a better-than-routine catch.

Next, it was Lake Central left fielder Jacob Warn’s turn to weigh in with a web gem to rob a hit from Derrick Wiening, leading off the third. Warn cut a path in and toward center and went horizontal to snag a sinking line drive.

The defensive fireworks shifted to the infield, where Munster third baseman Schaum and Wittkamp, the catcher, teamed on a pivotal bang-bang play in the fourth inning. With the bases loaded, one run in and one out, Griffith Tobias hit a high-hopping bouncer off the end of the bat. Showing quick feet, a quick release and quick thinking, Schaum charged the ball and rifled a throw to Wittkamp. Bowled over by the runner, Wittkamp held onto the ball for the force and picked up the final out with a strikeout.

The score didn’t stay tied at 2-2 for long. Munster (12-4) parlayed singles from Kozy and a wild pitch into a run that gave the Mustangs a 3-2 lead at the end of four innings. It stayed that way the rest of the night. Wittkamp got the final out of the sixth, showcasing a strong arm throwing out a runner attempting to steal second and then placed the game-ending tag in the seventh.

“The whole atmosphere here, with the crowd, it was like a tournament atmosphere,” Shinkan said. “Two teams that are pretty much most of the time sectional favorites, and I know both teams have been looking forward to this game because it’s Munster and Lake Central. What a ballgame. There were some great plays on both sides. Both sides played really well. It was a fun night.”

Andrew Trevino was a 1991 state champion at Calumet before wrestling at Indiana. He's been a longtime assistant coach in the Region and has spent a decade on staff at Region Wrestling Academy.

With his defense behind him, Max Herring throws six-hit shutout to sweep Munster

“I trust my defense and I just throw strikes and let the game take care of itself. A big part of my success is knowing that it’s just a game. I try to have as much fun as possible."

Here are the softball statistical leaders for Northwest Indiana teams in 2021.

Clara Phariss stars in the circle but is quick to give credit to her teammates. "Overall, I think the perfect game was a big team thing, too."

The Last Inning provides a backdrop for Hammond baseball memories

“When I came here today, I said I was going to judge the success of the tournament by the kids,” Ryan Sosnowski said. “Talking to the kids, they’re telling me thank you.”

"There are some things we haven’t quite practiced, yet. This was a great game to try some stuff out. It was nonconference against good competition."

Munster catcher Evan Wittkamp holds on to the ball after tagging Lake Central’s Carter Doorn out at home in the fourth inning at Munster on Friday.

Munster’s Chris Iatrides slides in safe home on a passed ball to break the 2-2 tie in the fourth inning against Lake Central at Munster on Friday.

Munster’s Ben Greiner takes the throw to second as Lake Central’s Carter Doorn comes into second base in the fourth inning at Munster on Friday.