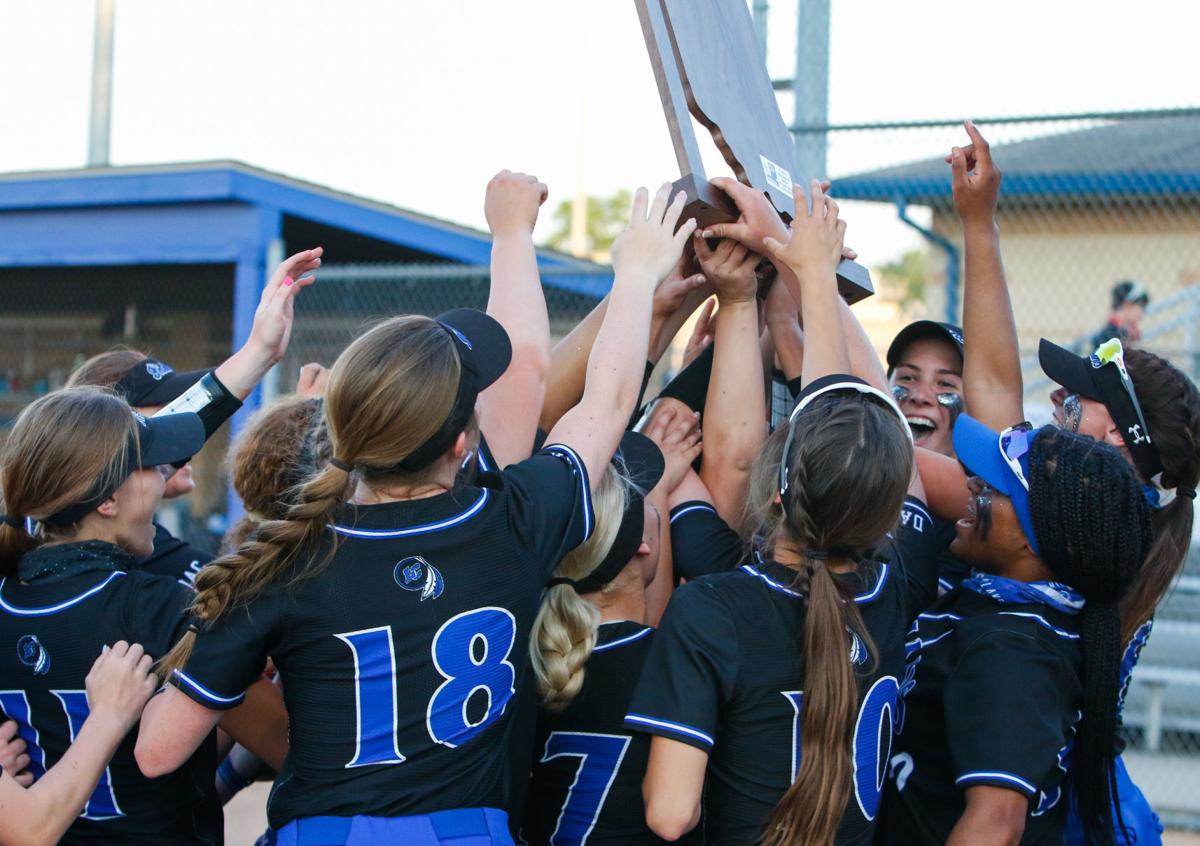 Lake Central players celebrate with their Class 4A semistate championship trophy following a 8-1 win over Noblesville on Saturday in West Lafayette. 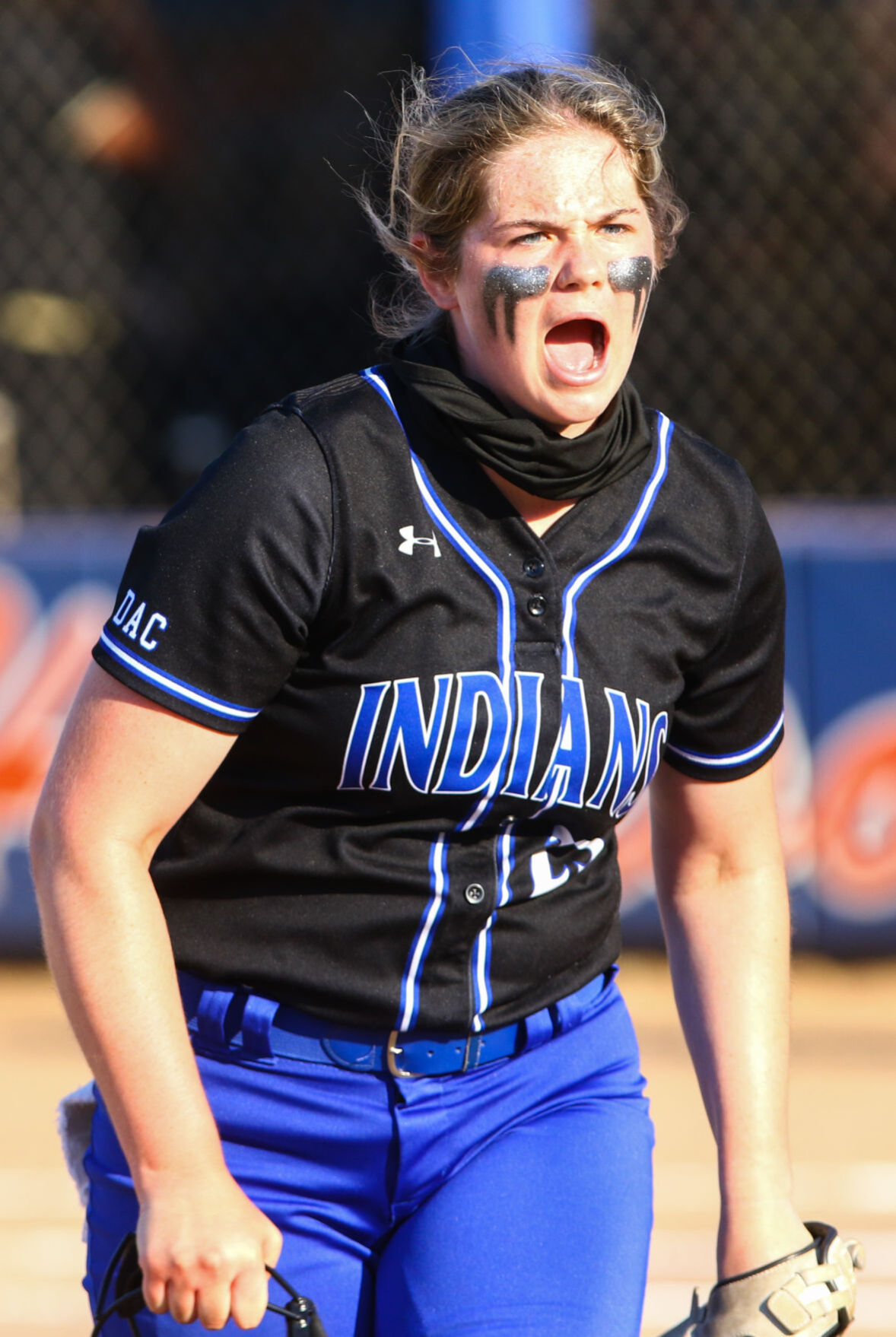 Lake Central's Peyton Pepkowski reacts after recording another strikeout against Noblesville on Saturday during a Class 4A semistate final at Harrison in West Lafayette. 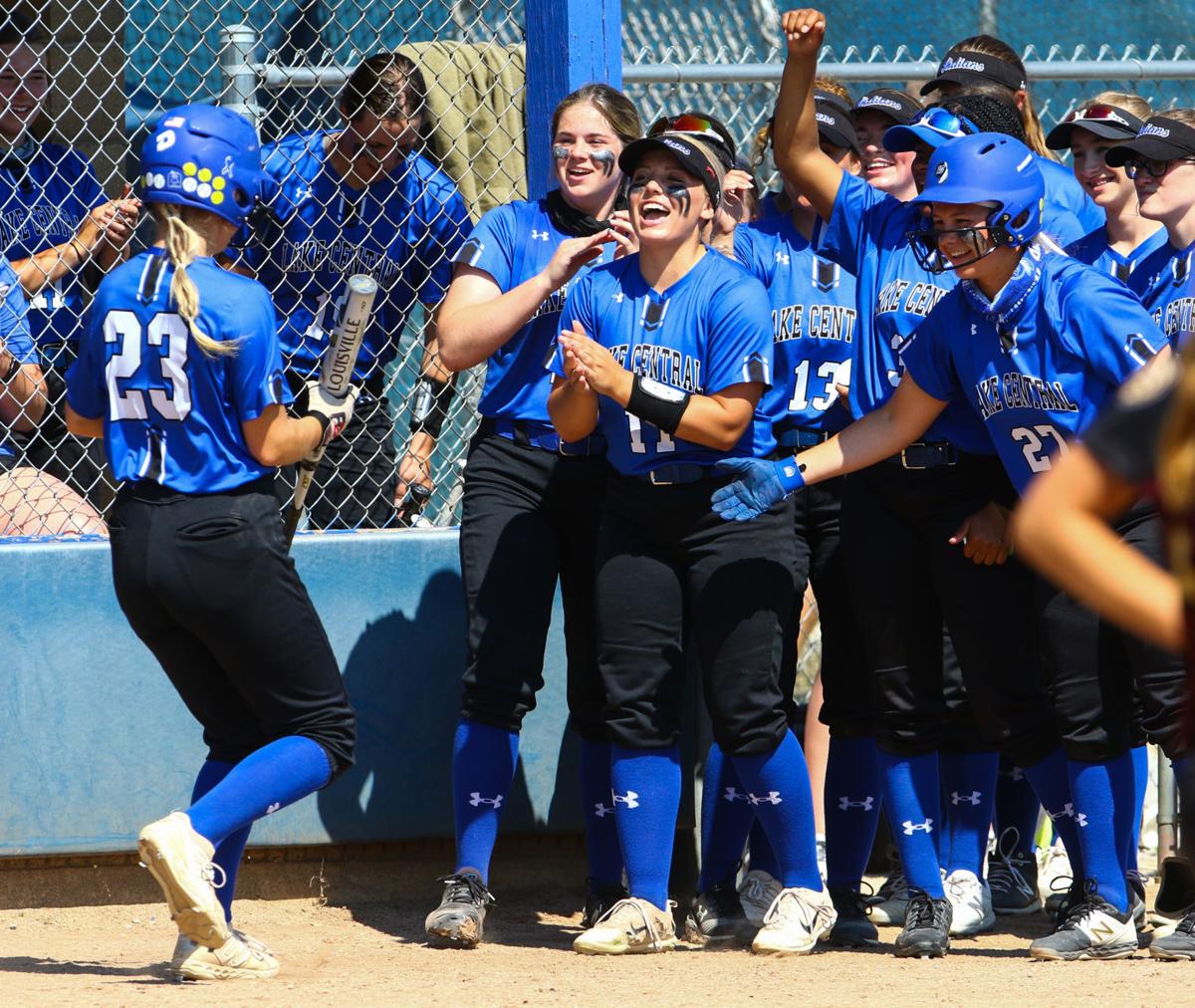 Lake Central players celebrate with teammate Mikayla Creasbaum (23) after her solo home run against Columbia City on Saturday during a 4A semistate semifinal at Harrison High School in West Lafayette.

WEST LAFAYETTE — Peyton Pepkowski used her arm to send Lake Central to the semistate title game on Saturday morning and then she used her bat to send the Indians to the Class 4A state title game.

Pepkowski was electric in the circle in Saturday’s semistate opener against Columbia City and then she came back on Saturday night with a pair of hits and three RBIs to help the Indians knock off Noblesville 8-1 at Harrison.

The Indians (31-1) will face Roncalli next weekend at Center Grove in Greenwood in the Class 4A state championship. Lake Central will be making its third appearance in the last six seasons and first state title trip since 2018.

"(Saturday morning) was a good start,” Pepkowski said. “Throwing strikes is not a problem. I iced my arm and I took a nap (to get ready for Saturday night). I like big games. I like the pressure.”

The Indians needed one trip through the lineup to solve Noblesville pitcher Cameron Grayson. Sydney Doloszycki reached on a single deep in the hole to shortstop in the top of the third inning and she advanced to third when Grace Renschen snuck a grounder just by first base. Lake Central broke through on the scoreboard when Kaitlyn O’Drobinak placed a perfect bunt in front of the plate that confused Noblesville catcher Scout Duplaga. The junior backstop picked up the ball and hesitated in several directions as Doloszycki sprinted toward home and slid under a diving tag.

The rally continued as Kiley Conner doubled to the wall to score a run and then Pepkowski delivered a two-run single to push Lake Central’s lead to 4-0. Conner finished with three hits and the junior now has 14 hits in her last eight games.

“We came into the game with a lot of energy and my teammates were just hyping me up the entire time,” Conner said. “It’s really hard to put into words.”

Lake Central continued to pour on the offense in the fifth inning when Wisconsin commit Bree Mitchell plated two runs with a bases-loaded single. The Indians added two more runs in the sixth as Conner and Pepkowski again added big hits.

In Lake Central’s five postseason victories, it has seemingly been a different player providing a bulk of the offense in each game.

“It’s a really nice thing to have the depth we had,” Lake Central coach Jeff Sherman said moments before getting doused with a bucket full of Gatorade.

Noblesville got a run off Pepkowski in the sixth when Abby Harvey scored following a leadoff triple. Pepkowski then coaxed the Millers into three straight flyouts before shutting down Noblesville in the seventh to secure the victory. Pepkowski finished the game with nine strikeouts to improve to 23-0 this season.

Mikayla Creasbaum hit a solo home run in the second inning and that was all the offense Pepkowski would need as the senior hurler was dominant in Saturday's opener, 1-0 over Columbia City. Pepkowski struck out seven of the first eight batters she faced and the Loyola signee finished with 13 strikeouts.

Creasbaum homered for the second straight postseason game after she hit a key solo shot against Crown Point last week in the Class 4A regional title game. Creasbaum has five home runs this season.

Pepkowski kept the Eagles at bay much of the game, but Columbia City was finally able to get a runner into scoring position in the seventh inning. Pepkowski shook off the threat and retired the final two batters with infield flyouts to clinch the victory.

Lake Central players celebrate with their Class 4A semistate championship trophy following a 8-1 win over Noblesville on Saturday in West Lafayette.

Lake Central's Peyton Pepkowski reacts after recording another strikeout against Noblesville on Saturday during a Class 4A semistate final at Harrison in West Lafayette.

Lake Central players celebrate with teammate Mikayla Creasbaum (23) after her solo home run against Columbia City on Saturday during a 4A semistate semifinal at Harrison High School in West Lafayette.