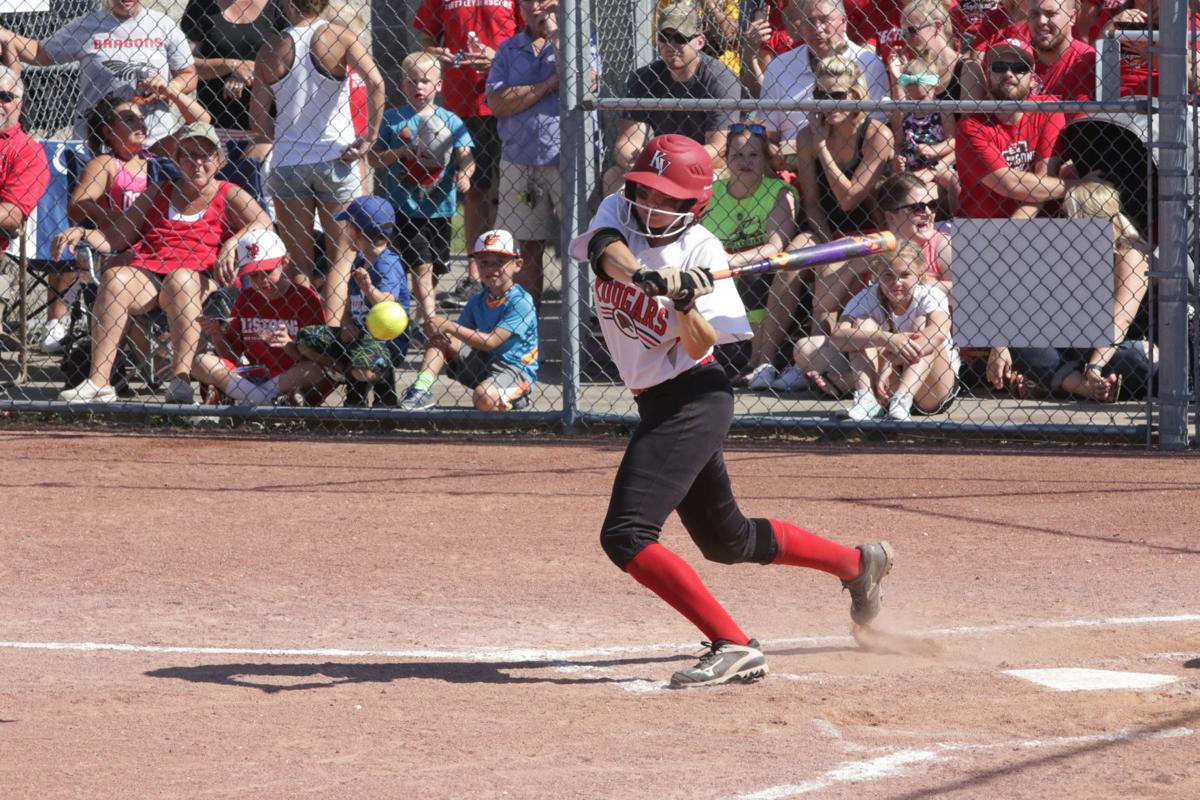 Kankakee Valley's McKenzie Adams gets a hit in the second inning against New Palestine on Saturday during the Class 3A state championship game in Indianapolis. 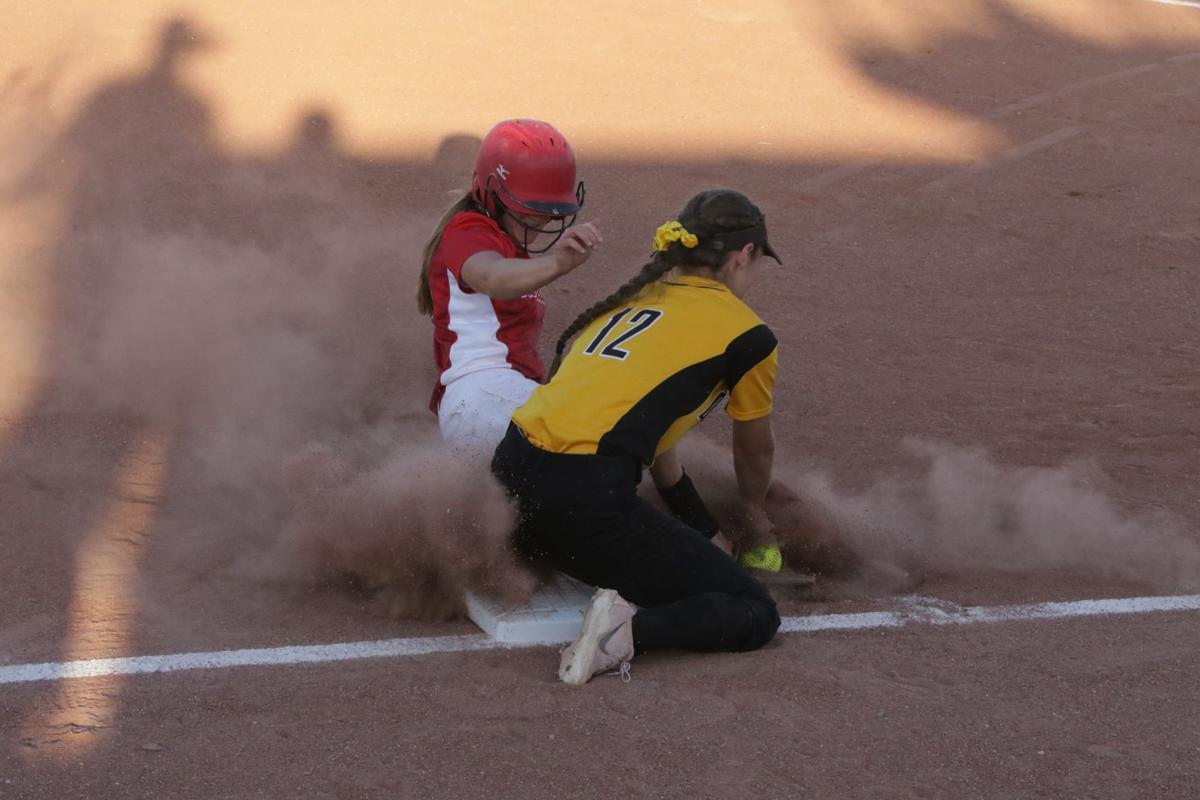 Crown Point's MacKenzie Dunlap slides into third base in the first inning on Saturday during the Class 4A state title game in Indianapolis.

INDIANAPOLIS — There was no way Mea Adams was going to sit this one out.

Over the course of the week, doubt had crept in that Adams was going to even be able to play in her final game in the Class 3A State Championship.

"It was in doubt most of the week and until Thursday I didn't know if she'd play at all," Kankakee Valley coach Brian Flynn said. "I wasn't really sure how I was going to use her until we got on the bus on the way here."

Against South Bend St. Joseph's in the semistate championship, Adams slid back into first base and heard a popping noise. Her foot had caught on the base and the swipe tag hit her knee, forcing it inward. Initially thinking meniscus, it turned out to be a torn ACL for Adams.

The initial intention was to hit, but not field. With a vote of confidence from Adams herself, the usual lead-off hitter for the Kougars was penned into the lineup, batting sixth and playing right. On essentially one knee, Adams delivered a resilient 4-for-4 performance.

"She came up to me and said she thought she could play right and wanted me to get her in," Flynn said. "She's one of those kids who has played for me for four years, how am I going to turn that down? She's a big reason why we were here and it was such a gutsy effort on her part."

The way Adams played wasn't hindered either, as she beat out a bunt and an infield single, letting her softball instincts take over. Adams knee was taped up and braced to the point it forced her to essentially hobble around the field.

"I was running on a lot of adrenaline and a lot of Ibuprofen," Adams said. "It's kind of sore when I run and I have to hobble a little bit but the tape and brace definitely helped some. I thought that I could run if it was taped up and stuff. Coach trusted me enough to put me out there and I'm so happy he did."

"I think I surprised everyone with that bunt. I do a lot of bunting as a slapper so that was just a lot of practice kicking in. I had a hunch she was going to throw me inside from previous at-bats so I went with my gut feeling, bunted, and then ran like heck."

The ACL injury was kept a secret as Adams didn't want coach Flynn to keep her out, too. After the game, Adams finally let her coach and teammates know.

"I kept it a secret and just kept it to myself," Adams said. "I didn't want anybody else to look at me different or for coach to think I wasn't capable. I just hung in there as best that I could."

No cheering in the press box: IHSAA sports information director Jason Wille is a native of Crown Point, a 1986 grad.

His niece, C.P. right fielder Lydia Byrd, is a junior who played in the Class 4A game against Avon.

Jason said he joked this week with the IHSAA staff that there's no cheering in the press box.

Region blue in the house: Two umpires from Northwest Indiana worked in the IHSAA state finals. Gary's Mark Terry Sr. worked the Class A game Saturday morning. Then, Schererville's Daniel Escalante was behind the plate in the Class 3A game.

Scecina wins 2A title: Kaylyn Linder and Trinity Eckerty each had two RBIs in leading Indianapolis Scecina to a 6-2 win over Elwood. The game was 3-2 before the Crusaders scored three in the top of the seventh. Cassie Smith scattered nine hits and struck out two in the win.

Tecumseh wins Class A: Maddie Duncan went 4-for-4 to lead Tecumseh to a 3-0 win over Tri. Kirsten Greenberg and Chloe Holder each had RBIs in the win. Duncan struck out five and allowed three hits.

STEVE HANLON: There is no 'i' in Holloway

INDIANAPOLIS -- How did this happen? Really?

INDIANAPOLIS — When you've been around as long as Crown Point coach Pete Iussig has, as he admits, weird stuff comes to your mind.

Times POY Holloway couldn’t have asked for a better finish

Among her hundreds of trips to work out in the gym at Jerry Ross Elementary School in Crown Point, Alexis Holloway has had several interaction…

Just like her sister Alexis, Anna Holloway has committed to play college softball at Notre Dame.

Success breeds changes in the IHSAA.

INDIANAPOLIS — It's been around since the first softball game was ever played.

Kankakee Valley's McKenzie Adams gets a hit in the second inning against New Palestine on Saturday during the Class 3A state championship game in Indianapolis.

Crown Point's MacKenzie Dunlap slides into third base in the first inning on Saturday during the Class 4A state title game in Indianapolis.