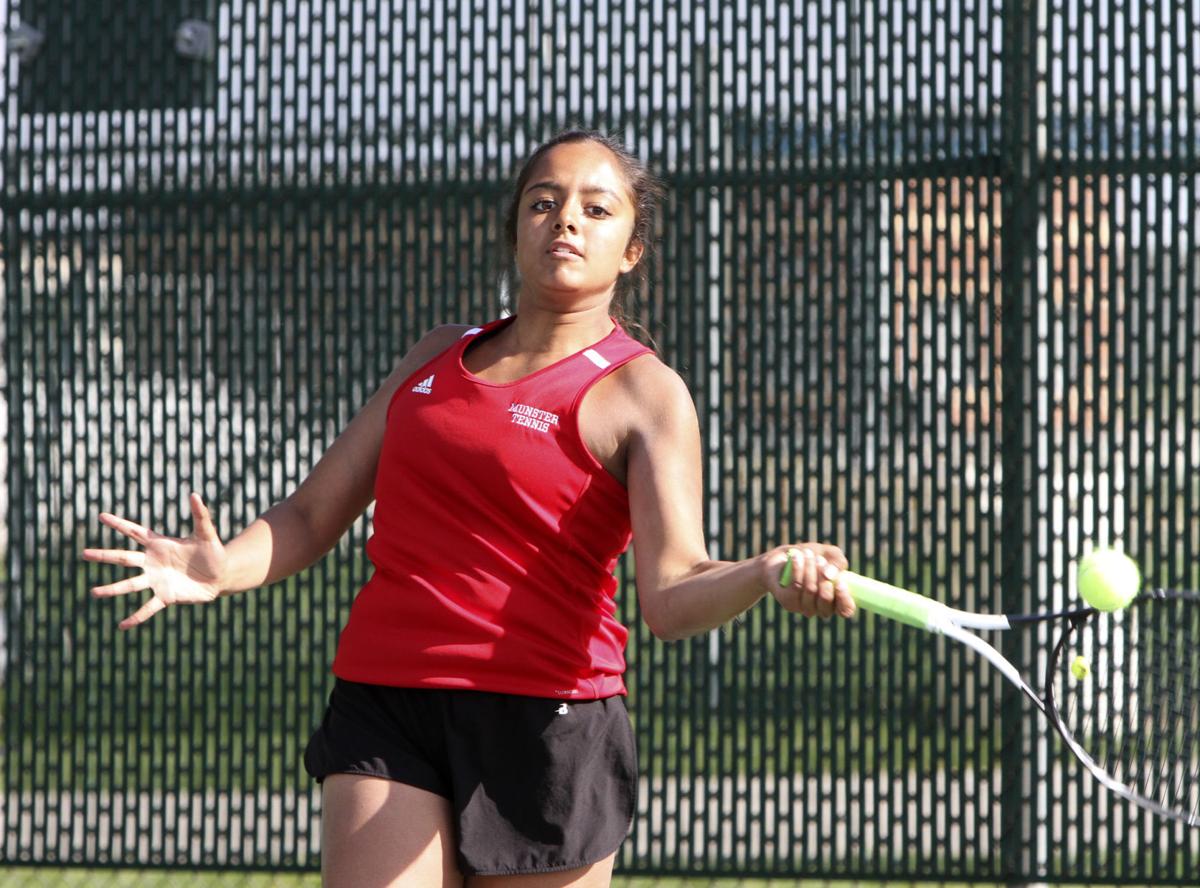 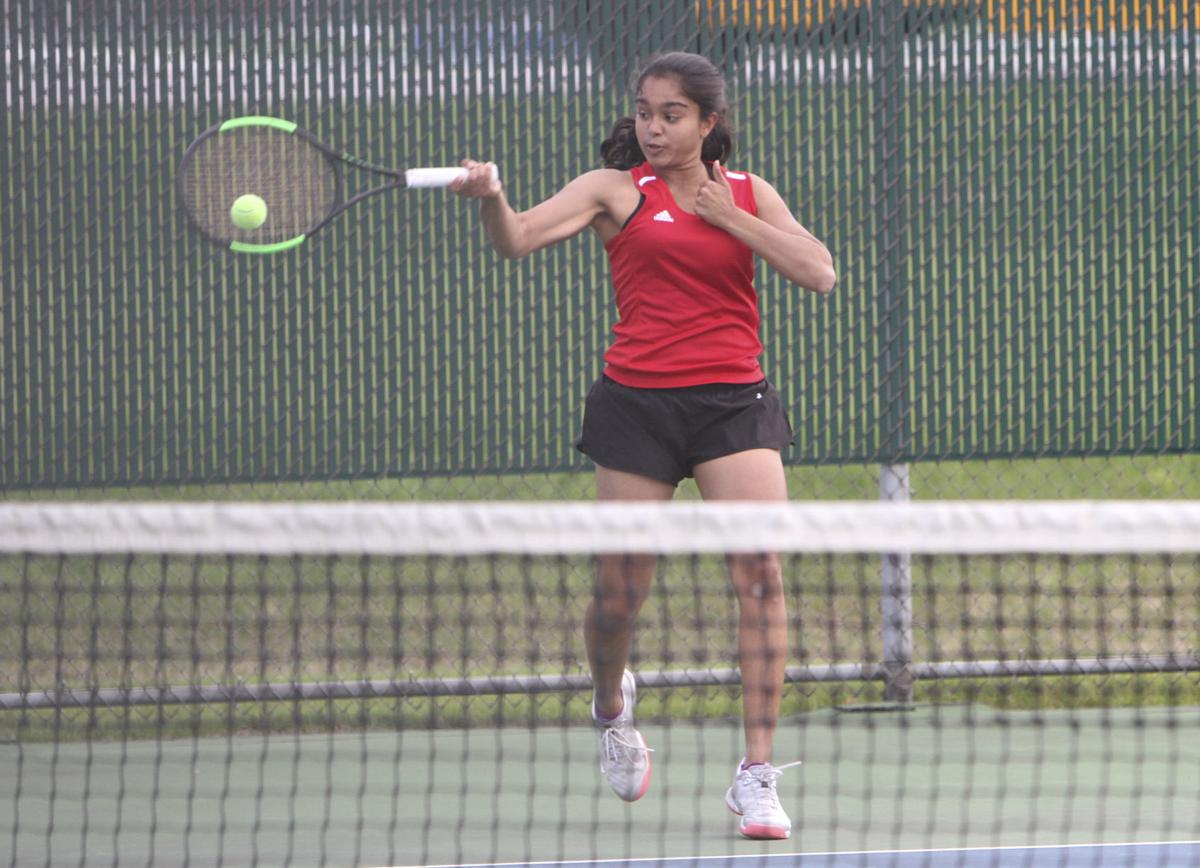 ST. JOHN — Near the end of their respective matches Wednesday, Munster freshman Sanjana Tallamraju and junior Shalini Tallamraju shared a moment on the court.

The sisters held commanding leads over their Lake Central opponents at No. 1 and No. 2 singles, respectively. As the Indians huddled by the fence with a coach, Sanjana Tallamraju leaned forward onto the net as she and Shalini chatted.

The Tallamrajus haven't faced many tight matches this season as perhaps the state's best 1-2 punch. But the two never stop pushing each other.

“She's basically my coach on the court,” Shalini Tallamraju said of Sanjana. “She's always telling me — even during my matches — she's telling me different things to do. … We're really close, so it's great that we're hitting with each other, constantly working on each other's games and pushing each other in practice.”

Shalini Tallamraju dominated for two years at No. 1 singles before Sanjana took the top spot this season, and the pair gives Munster two nearly automatic points each match. Sanjana Tallamraju rates as a 5-star recruit and the best freshman in Indiana, according to tennisrecruiting.net, while Shalini stands as a 4-star prospect and the state's third-best junior. On top of their talent, Munster coach Patrick Spohr said the sisters push themselves more than any players he has seen.

The sisters have been coming to Munster's courts since they were young. Their father, Satya Tallamraju, would point to names of the Mustangs' most accomplished players on display and say, “One day, you guys will be up there, too.”

They're certainly on pace. Lake Central coach Bryan Szalonek estimated players of the Tallamrajus' caliber come around roughly every five to seven years.

“I don't throw the word 'phenoms' around too often, but they are excellent at tennis,” Spohr said. “Fortunately for me, I don't have to do all too much with these two girls. That actually allows me to focus on other (players) that might need my coaching a little bit more so.”

Sanjana Tallamraju won her match 6-0, 6-0 in just under 40 minutes, while Shalini exited the courts with a 6-0, 6-1 victory less than five minutes later. Munster (5-1) handed Lake Central (8-1) its first loss of the season, overpowering one of the Duneland Athletic Conference's better teams. Szalonek said Munster was the toughest team on Lake Central's schedule and that even a loss would help the Indians when they faces their strongest DAC foes.

The Tallamrajus have plenty of comfortable matches, as the level of play in high school is lower than on the United States Tennis Association circuit. That gives the sisters breathing room to round out their game by perfecting new techniques or tactics like the serve-and-volley throughout the season.

Sanjana Tallamraju said the sisters prefer not to play points against each other, but they still hit all the time. These sessions provide both the opportunity to see playing styles that could give each other trouble, according to Satya Tallamraju. Shalini brings a steadier, baseline-oriented approach, while Sanjana plays with more power and aggression.

“Both of them have their own strengths, and they respect each other in that regard,” Satya Tallamraju said. “They're family, and they want each other to win so badly.”

The Tallamrajus' work ethic doesn't just promote a positive atmosphere on Munster's team, either. Their 9-year-old twin sisters, Pallavi and Priyanka, play tennis three or four days per week and look up to Shalini and Sanjana.

Satya Tallamraju said Shalini and Sanjana have always gotten to work with coaches and older players who were great role models, and now the sisters have embraced mentorship themselves. When Sanjana and Shalini win matches, Pallavi and Priyanka celebrate. When they lose, their twin sisters cry.

Sanjana and Shalini Tallamraju hope their sisters are rejoicing come June 1, when the Mustangs could play for a team state title.

“That's the big goal,” Sanjana Tallamraju said. “Usually USTA tournaments are individual, so that's different, but this is so much fun.”

Most freshmen would be content with a 6-1, 6-0 regional semifinal win over a senior. Sanjana Tallamraju is not most freshmen.