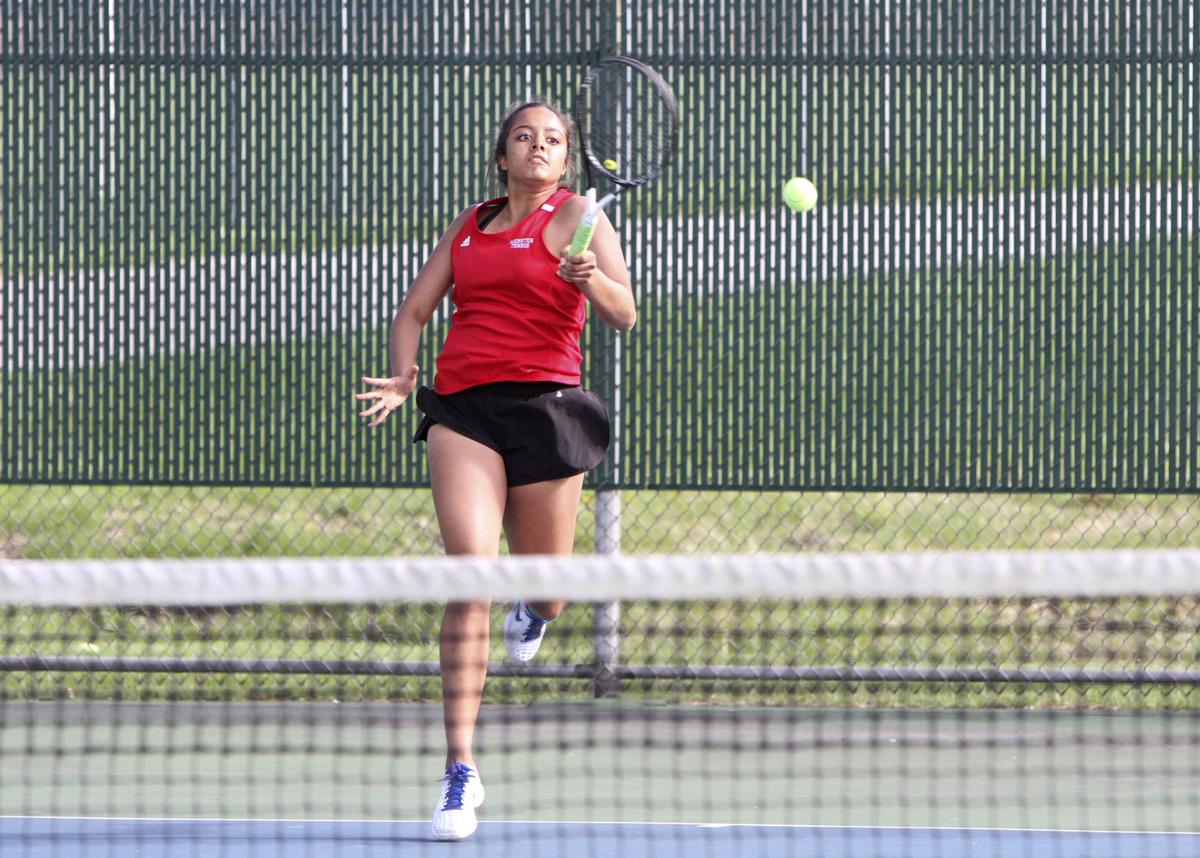 In this April 24 photo, Munster’s Sanjana Tallamraju hits a shot during a match at Lake Central. The freshman has lost just one match this season. 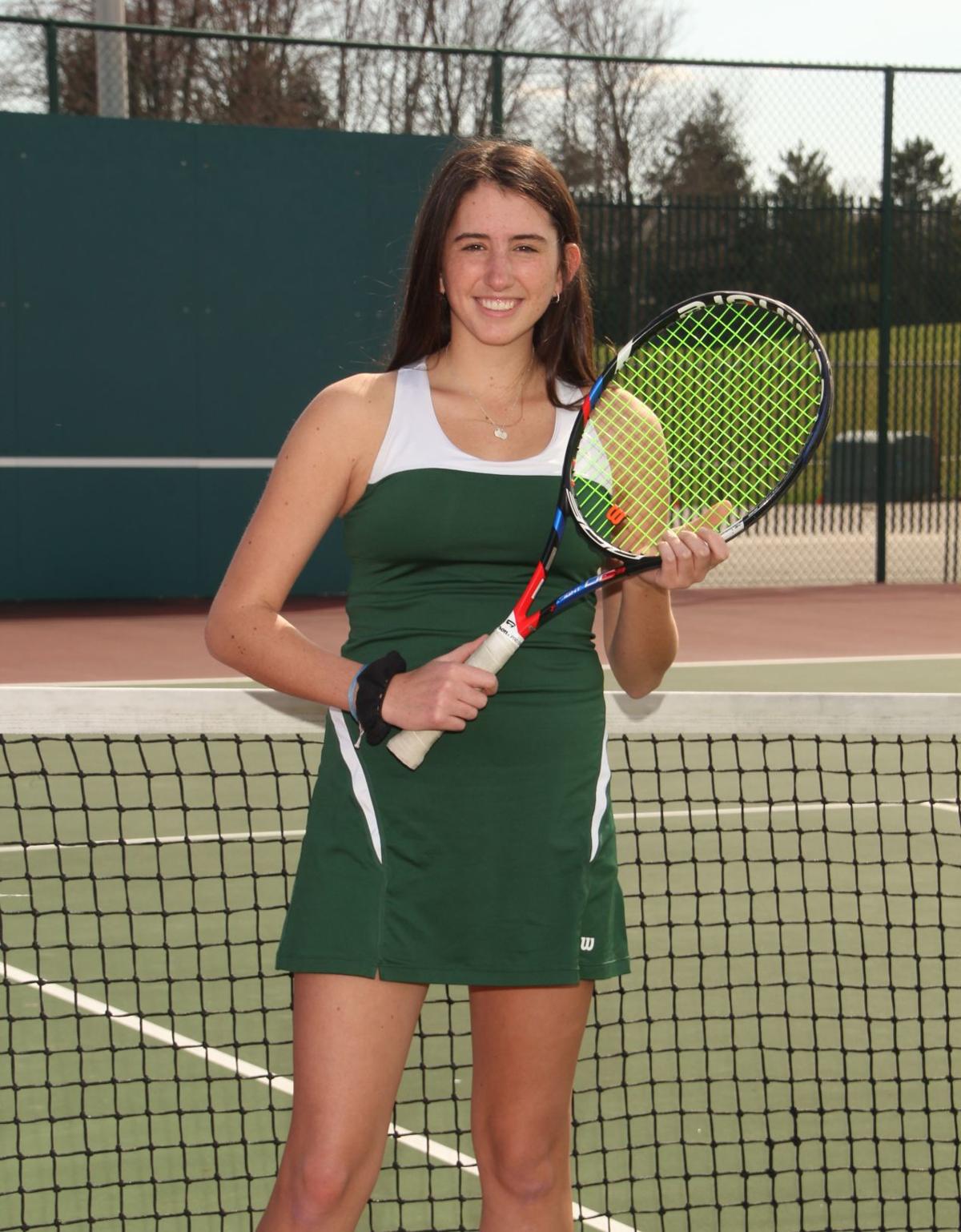 Valparaiso sophomore Rose Pastoret is playing in the girls tennis individual state finals for the second year in a row. Her first match is against the defending state champion.

A pair of Region underclassmen is just three victories from their ultimate goal.

Valparaiso sophomore Rose Pastoret and Munster freshman Sanjana Tallamraju are part of the final eight in the girls tennis singles state finals this weekend at Park Tudor in Indianapolis.

Pastoret said a title would instantly be at the top of her list of tennis accomplishments.

“It would mean everything,” she said. “I think it’s a cool thing to be able to say that you won a state championship.”

They are also three victories away from their ultimate goal in a field loaded with decorated players. It includes last year’s champion senior Halli Trinkle from Providence — “She has a target on her back for everyone right now," Tallamraju said — and undefeated Cathedral sophomore Ellie Pittman, the only player to beat Tallamraju this season.

“That is a great group of players down there. We just want to play our absolute best, feel like you left it all on the court,” Valparaiso coach Tim Shideler said of Pastoret. “She’ll be disappointed if she doesn’t win it all. That’s what we’re going there to do. But you always feel better if you feel like you’ve played your best.”

“It doesn’t matter who the opponent is, whether it’s somebody from this area or whether it’s one of the top players in Indiana, (Tallamraju) walks out there with the same mentality that she’s going to go out there and win,” Munster coach Patrick Spohr said. “For her to get where she wants to go, she has a very tough road ahead of her. (Each) match gets progressively more difficult than the last one and rightfully so when you’re playing at that level.”

Pastoret, ranked No. 5 in her class in the state, carries a 26-2 record into her quarterfinal meeting with Trinkle (18-1) on Friday.

“(Trinkle’s) the state champion from last year, so she’s pretty darn good, I’d guess,” Shideler said. “(Pastoret) has been playing very well and she has a tall task ahead of her. You’ve got to beat them all to be the champion, anyway.”

Pastoret made the final four a year ago while at Marquette Catholic. That experience might matter, Shideler said.

Tallamraju knows several of the state qualifiers. She’s hit with, but never played, her first-round opponent, Elizabeth Tindera (20-1). The South Vermillion freshman is ranked No. 156 nationally and No. 6 in Indiana in her class.

“I know she’s pretty aggressive, hits the ball pretty flat,” Tallamraju said. “I don’t know how good of a mover she is, but my tactic will be to stay aggressive and keep it on her.”

Pastoret and Tallamraju would meet in the semifinals Saturday, should they both advance.

Tallamraju is 24-1 on the season and could potentially meet Pittman in a rematch in the finals.

“We’re already proud of her. For her to be at this stage, she’s well represented Munster tennis,” Spohr said of Tallamraju. “But from her perspective, I don’t doubt that she feels that she deserves to be in that state championship. Her confidence, being a freshman and playing the schedule that she’s played this year, her confidence has just been going up and up.”

Cost: $5 per person per day

In this April 24 photo, Munster’s Sanjana Tallamraju hits a shot during a match at Lake Central. The freshman has lost just one match this season.

Valparaiso sophomore Rose Pastoret is playing in the girls tennis individual state finals for the second year in a row. Her first match is against the defending state champion.