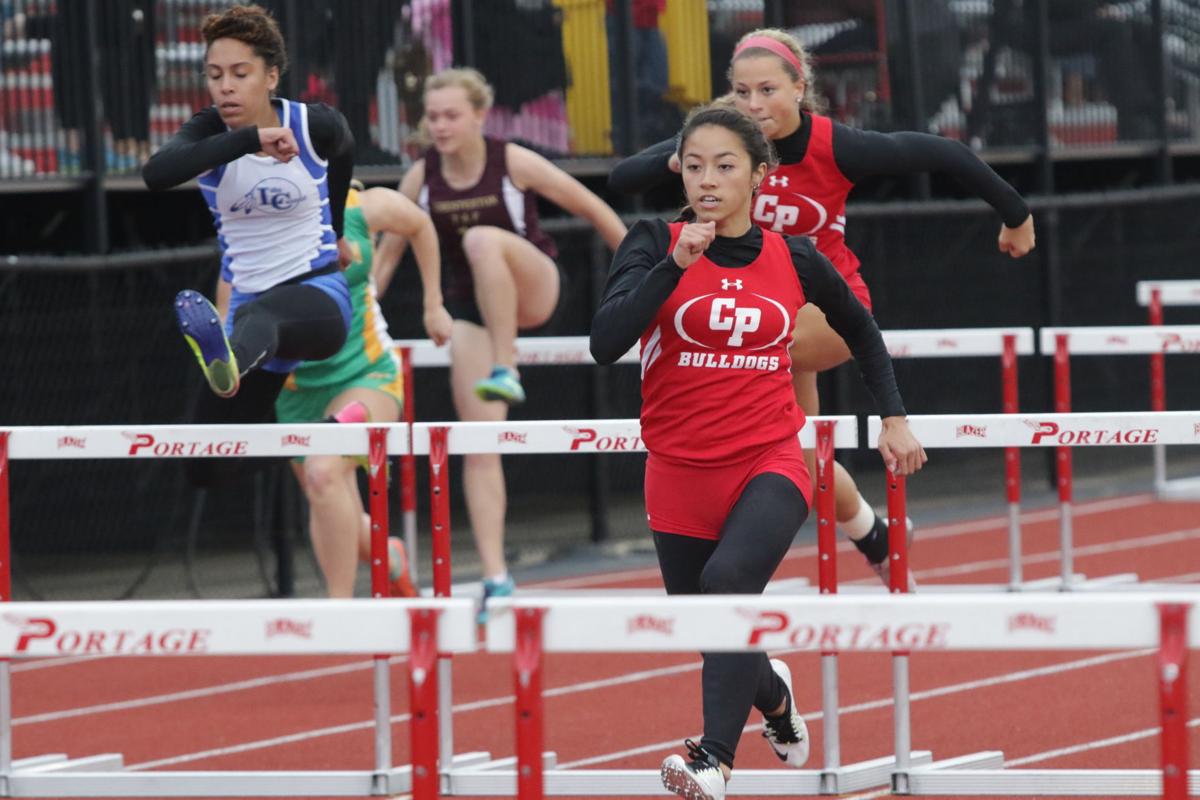 Crown Point's Kristen LaCosse leads the pack in the 100-meter hurdles Tuesday during the Portage Regional. 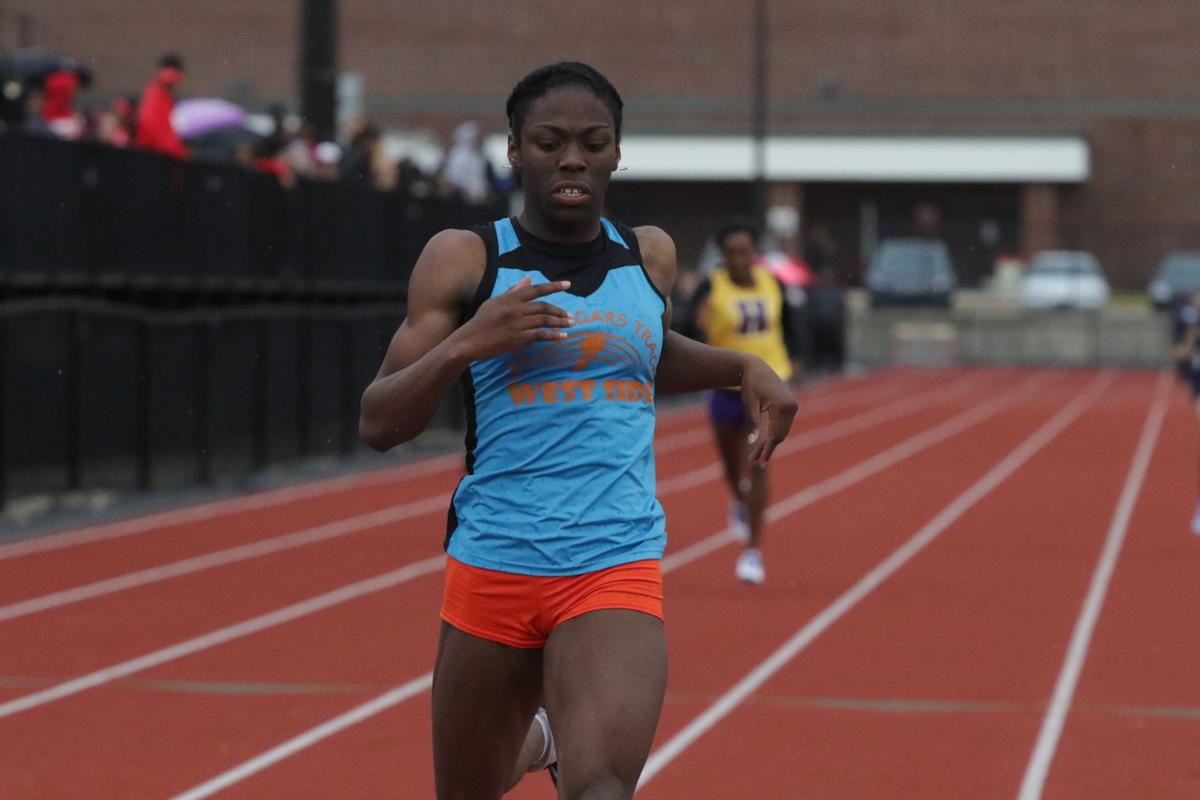 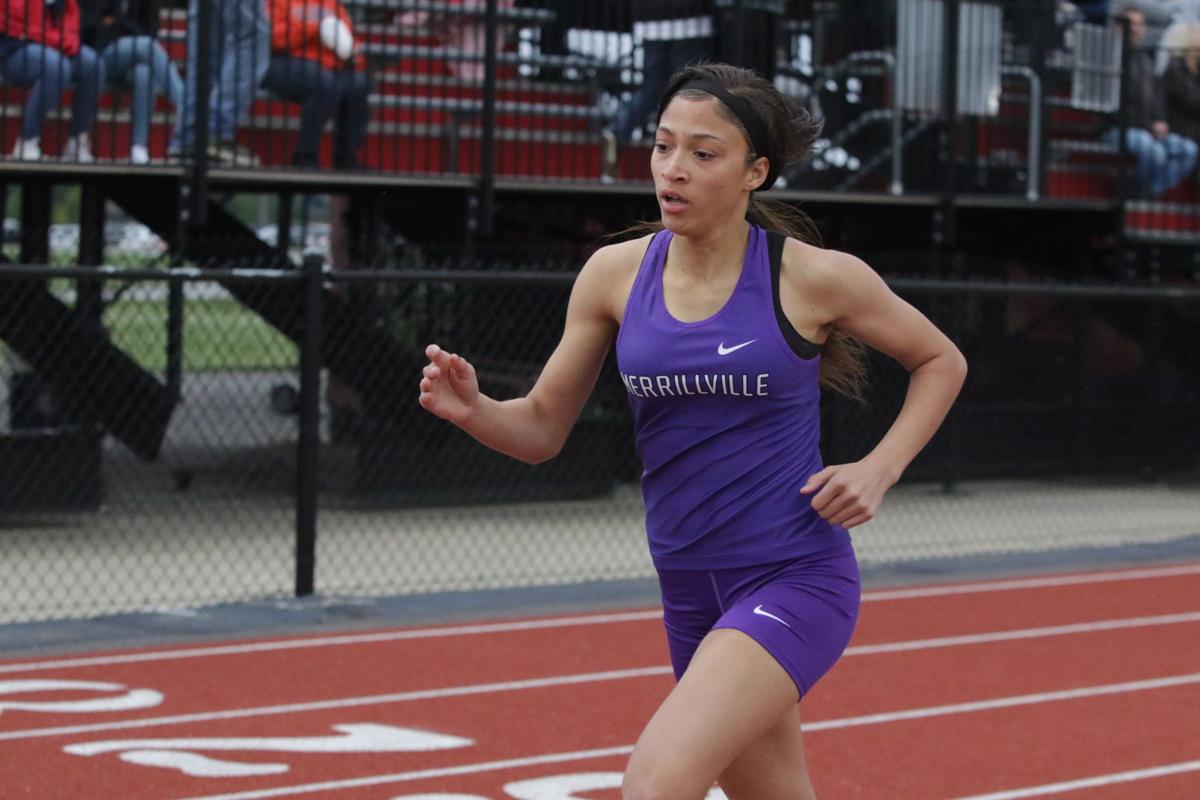 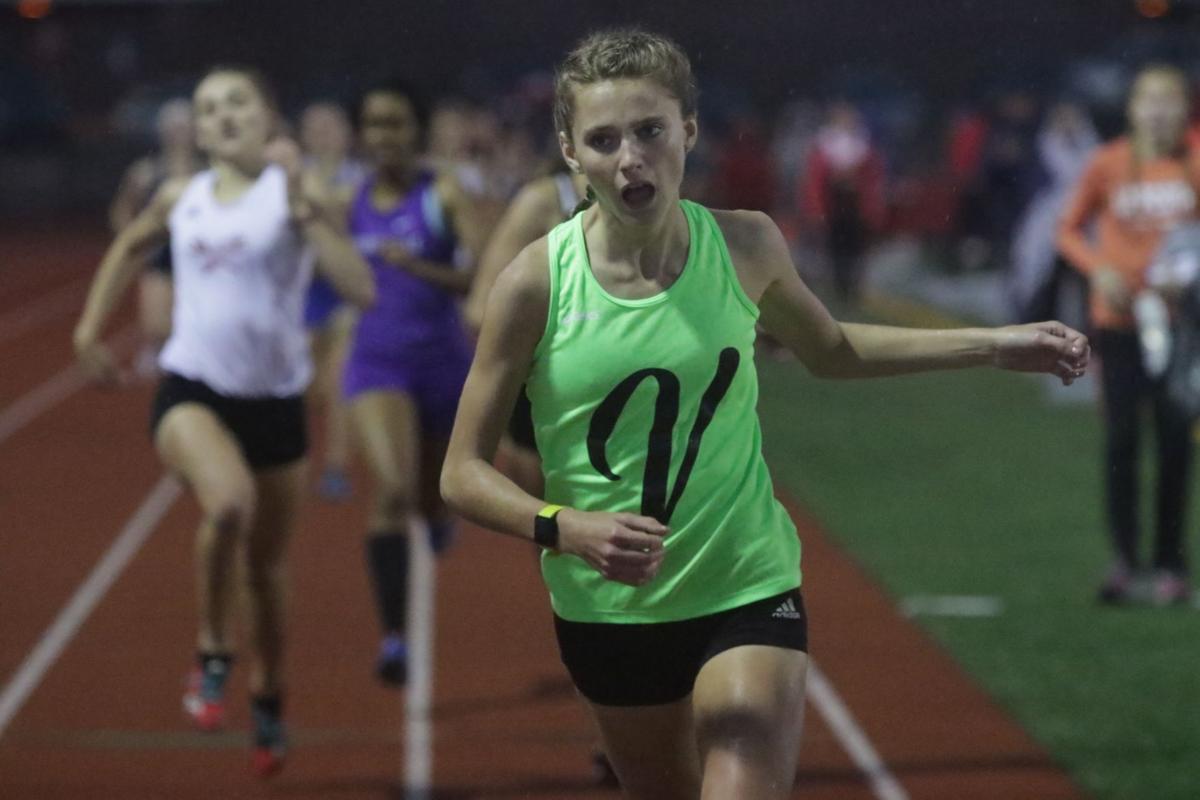 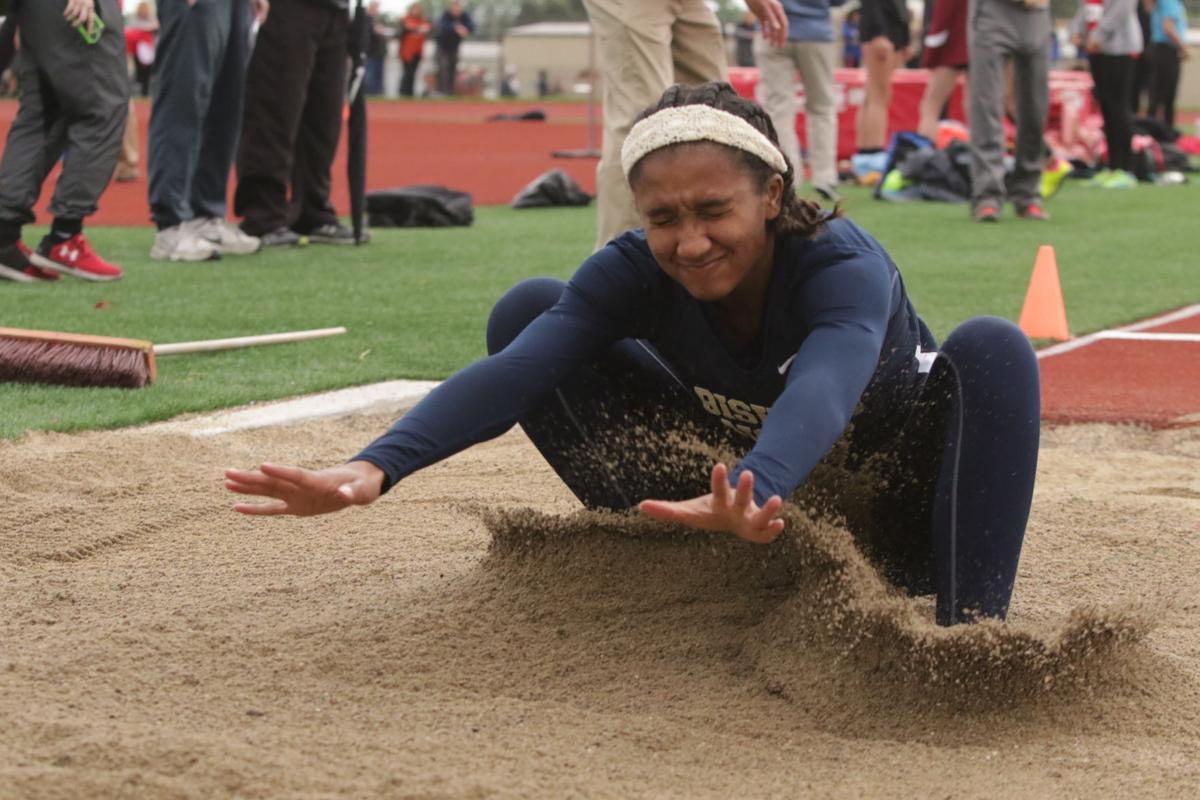 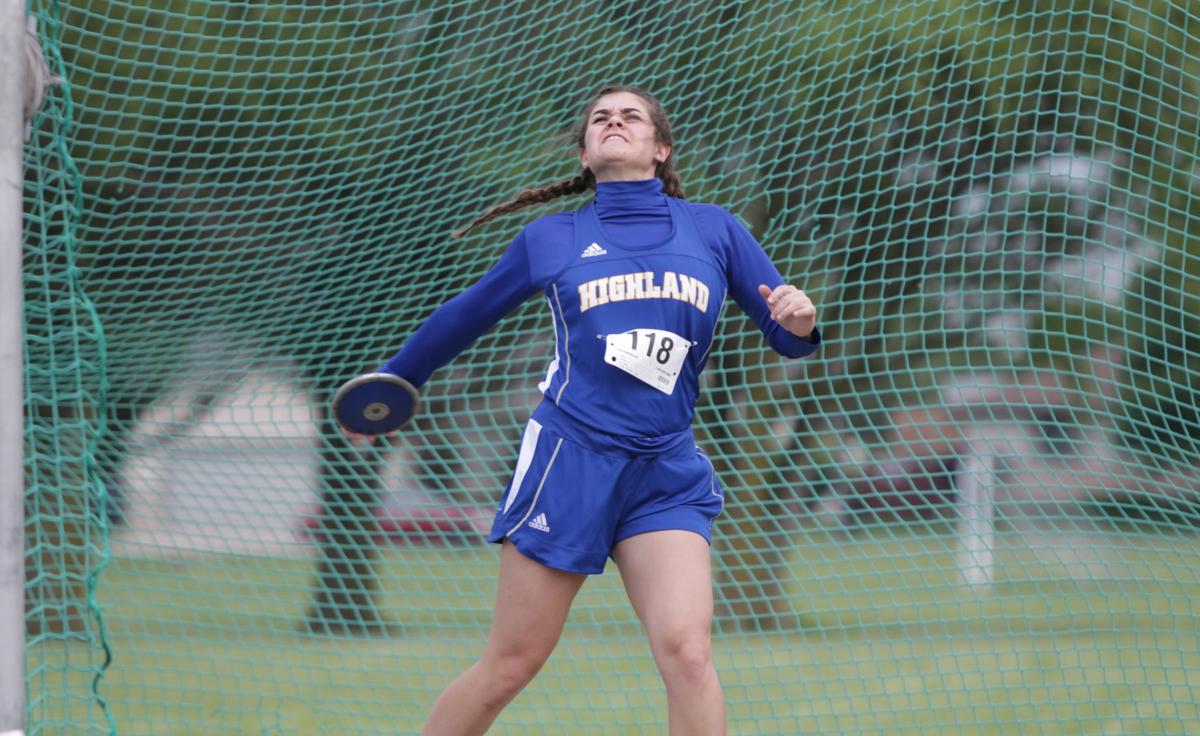 Highland's Chloe Rivera competes in the discus Tuesday during the Portage Regional.

Merrillville was second with 81, Lake Central third at 60 and Valparaiso fourth at 58.

"These girls weren't even born yet the last time we won the regional," Crown Point coach Lindsay Moskalick said. "I talked to them about opportunities, and they had the opportunity to do something big. It's about what you do with those opportunities, and you go from there.

“Going into this year, I knew we were capable of what we’re doing, and I’ve preached it from the beginning. The girls bought in and trained like they wanted it all season, and it’s awesome to see it happening. Seeing the smiles on the girls' faces is why I coach.”

Crown Point's Kristen LaCosse won the 100- and 300-meter hurdles for the Bulldogs, adding a first in the long jump. She ran a leg of the 1,600-relay that took second. Despite not being 100 percent and battling a possible case of strep throat, it was, as Moskalick put it, “Kristen being Kristen.”

“I can’t catch a break it seems,” she said. “Going in, I was trying to break 15 in the 100 and 45 seconds in the 300, and I did both of those things. My times weren’t great at first in the 100 when I started back up, and I was just trying to advance. Now was the time to bring my best out again, and it went well. Overall, to accomplish both of those things even though I’m not in the best state right now is exciting.”

The Bulldogs won the 3,200 relay, also advancing its other two relays. Savy White (200), Maddie Russin (800), Hannah Wylie (1,600) added second-place finishes, and Alicia Pinchok (100 hurdles) had a third to round out the state qualifiers for C.P.

“There were some bumps along the way, but all the girls stepped up, and we qualified a good amount of girls, which is awesome” Moskalick said. “They did what they needed to do to bring home the title. Our whole motto has been starting strong and finishing stronger, and now we’ll look to the state meet and see what we can do there.”

Heading into state, the goal is clear for Christian, who has her sights set on Pike standout Lynna Irby.

Valparaiso had a multiple winner in freshman standout Ava Gilliana who won the 800 in 2:18.23 and the 1,600 in 5:09.91, a second off her personal best. The Vikes had two other winners in Madison Ochs (discus) and Brittney Clark (pole vault). Ochs was second in the shot put as was Logan Ferngren in the 1,600.

“I definitely wanted to make it to state for the mile,” she said. “I kept on dropping my times throughout the season, and I was getting closer and closer. As the season went on, I gained more and more confidence. It’s a great feeling. After the mile I was happy, but I knew I had another race, and I had to contain myself."

Corin Erwin won the high jump, and teammate Imani Brown was second for Munster, as it added a third-place finish in the 400 relay. Hobart advanced in three events, with Lauren Edwards (400), Olexia Brookshire (100) and its 1,600 relay team.

Lake Central advanced Destiny Washington in both hurdles events and its 3,200 relay team. Shelby Riehle won the 3,200 for LaPorte, and teammate Riley Tuerff was second in the 300 hurdles. Victoria Farley won the shot and took third in discus for Portage.

Crown Point's Kristen LaCosse won the 100- and 300-meter hurdles and the long jump for the Bulldogs.

LaCosse heads to state as one of C.P.’s most decorated athletes

Kristen LaCosse thinks she could’ve done more. That has to be a scary thought for opponents.

There's a fine line in athletics between taking it seriously and taking it too seriously.

HIGHLAND — When Antonise Christian took the baton for the 1,600-meter relay, there was a sizeable margin between the West Side star and first-…

Selections from the Girls Track Regional competition in Portage.

Crown Point's Kristen LaCosse leads the pack in the 100-meter hurdles Tuesday during the Portage Regional.

Highland's Chloe Rivera competes in the discus Tuesday during the Portage Regional.