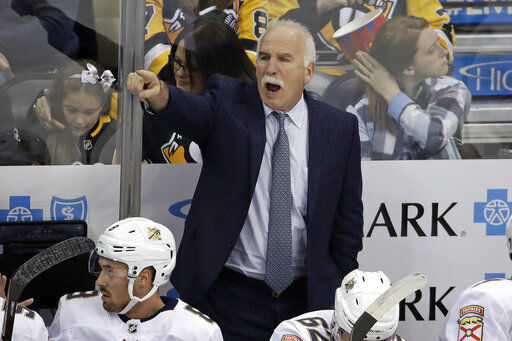 Florida coach Joel Quenneville returns to Chicago for the first time Tuesday since he was fired by the Blackhawks.

Chicago Blackhawks right wing Patrick Kane (88) poses with the puck after getting his 1,0000th point on an assist against the Winnipeg Jets after an NHL hockey game Sunday, Jan. 19, 2020, in Chicago. (AP Photo/David Banks)

Chicago Blackhawks coach Jeremy Colliton, center, yells to his team during the third period of an NHL hockey game against the Anaheim Ducks on Saturday, Jan. 11, 2020, in Chicago. (AP Photo/Kamil Krzaczynski)

CHICAGO — In some Chicago circles, certainly every one that includes a hockey rink, it's just “Q.” Only one letter is necessary for a man so revered there is a Twitter account for his mustache with more than 40,000 followers.

Joel Quenneville leads the Florida Panthers into Chicago to take on the streaking Blackhawks for the first time since his wildly successful run in the Windy City ended some 14 months ago.

The 61-year-old Quenneville coached the Blackhawks to three Stanley Cup championships and nine playoff appearances in 10-plus years before he was fired when the team got off to a lackluster start last season. He was hired by the Panthers in April, setting up what almost certainly will be an emotional night for the coach and his former players.

“He’s like an icon in Chicago, whether it’s him winning three Stanley Cups, coming in and helping us become better players," Blackhawks star Patrick Kane said. “What he’s done here in his career is amazing, he’ll get a warm reception and it’ll be good to see him. We’ll try to get a win against him and enjoy the time."

Quenneville coaching against his former team is the big headline, but it's also a matchup of two surging teams hoping to carry their momentum into an extended break. Kane got his 1,000th career point when Chicago beat Winnipeg 5-2 on Sunday night for its season-high fifth consecutive victory. Florida had won four in a row heading into Monday night's game at Minnesota.

Chicago had made just one playoff appearance in 10 years when Quenneville took over four games into the 2008-09 season, replacing Hall of Famer Denis Savard. Dale Tallon was the general manager for the Blackhawks at the time (and he hired Quenneville again with the Panthers).

The coaching change in Chicago sparked an unprecedented run for one of the NHL's Original Six franchises.

Quenneville was the right choice at the right time for Chicago's promising young core, and Kane, Jonathan Toews, Duncan Keith and Brent Seabrook blossomed with the former NHL defenseman behind the bench. The Blackhawks won the Stanley Cup in 2010, 2013 and 2015, and they also reached the conference finals in 2009 and 2014.

“I was fortunate, luckiest guy in the world when I walked into the Chicago situation there — a team ready, sitting on go to win," Quenneville said after he took the job with Florida. “I feel the same here now.”

Heading into Monday's game against the Wild, Quenneville has Florida in contention for its first postseason berth since 2016. Jonathan Huberdeau is heading to the All-Star Game for the first time.

When Quenneville was fired by Chicago, Jeremy Colliton was promoted from the Blackhawks' AHL affiliate in Rockford to the top job. Colliton has been booed before some home games this season, but he sounds as if he is looking forward to the warm reception coming for Quenneville.

“It’s a chance to honor Joel. It’s a big night for the organization," Colliton said after the victory over the Jets. “He was great to me, so I want to honor him too. It’s a big part of the reason why I came here to begin with, because he was here."

Copyright 2020 The Associated Press. All rights reserved. This material may not be published, broadcast, rewritten or redistributed.

Florida coach Joel Quenneville returns to Chicago for the first time Tuesday since he was fired by the Blackhawks.

Chicago Blackhawks right wing Patrick Kane (88) poses with the puck after getting his 1,0000th point on an assist against the Winnipeg Jets after an NHL hockey game Sunday, Jan. 19, 2020, in Chicago. (AP Photo/David Banks)

Chicago Blackhawks coach Jeremy Colliton, center, yells to his team during the third period of an NHL hockey game against the Anaheim Ducks on Saturday, Jan. 11, 2020, in Chicago. (AP Photo/Kamil Krzaczynski)