Indiana sticks to plan in up-and-down start, Bearcats next
Share this
1 of 2 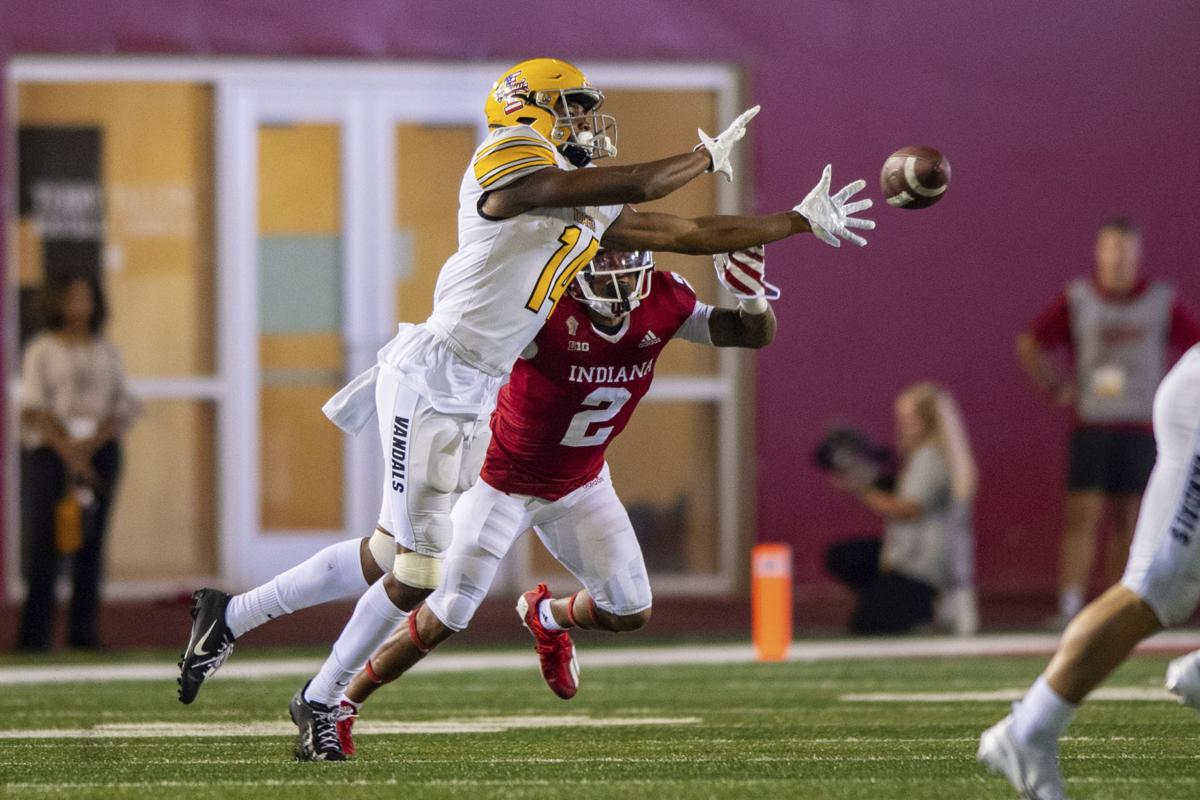 Idaho wide receiver Kyrin Beachem (14) attempts to make a catch while being covered by Indiana defensive back Reese Taylor (2) during the second half of Saturday's game. 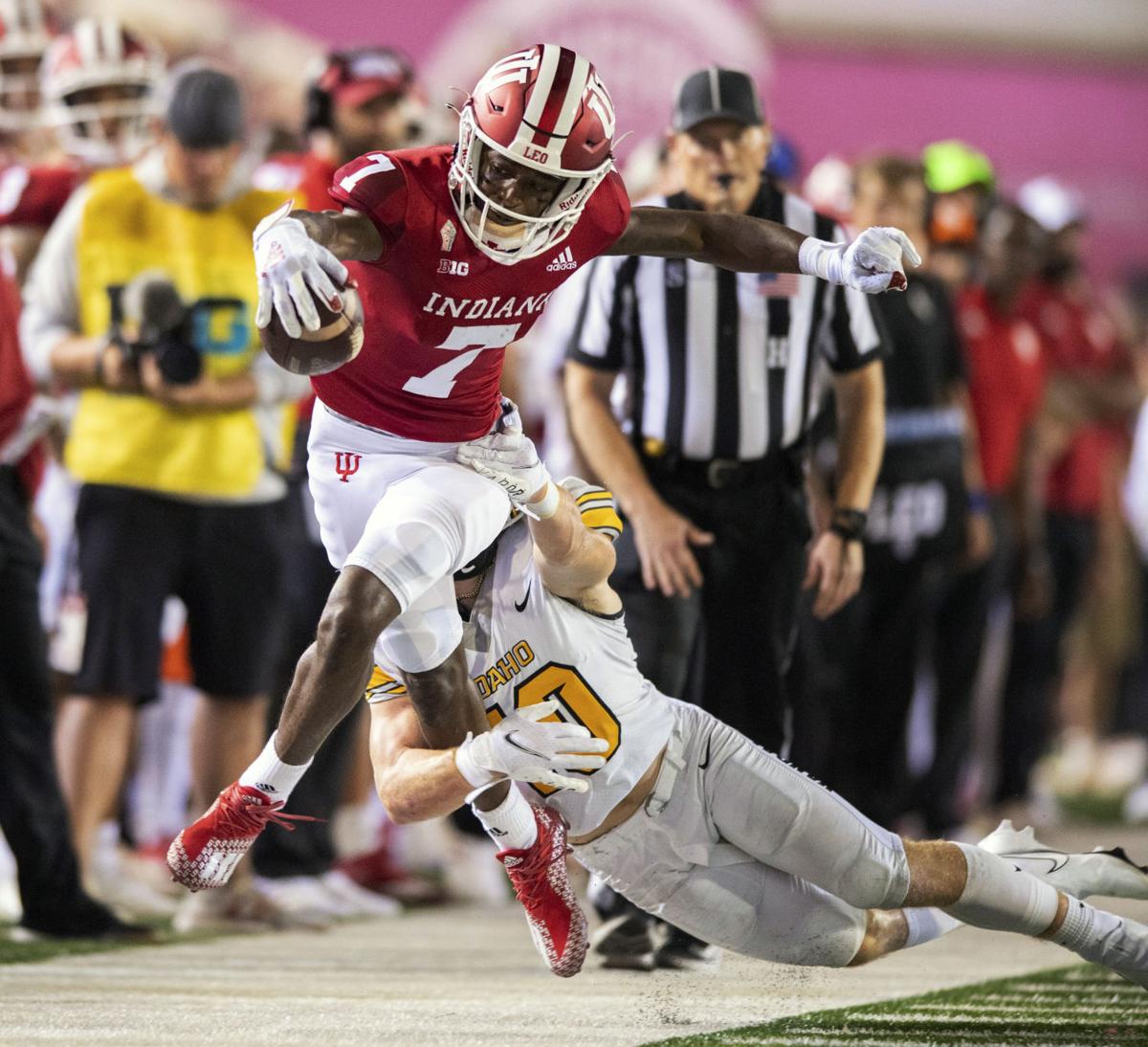 Indiana wide receiver D.J. Matthews Jr. (7) attempts to stretch for a first down as he's knocked out of bounds by Idaho linebacker Coleman Johnson (10) during the Hoosiers' win on Saturday.

Indiana coach Tom Allen is sticking to the plan.

Rather than emphasize the potential opportunities for the Hoosiers this weekend against No. 8 Cincinnati, Allen wants his players to forget about their embarrassing season-opening loss at Iowa and their resounding rebound against Idaho.

Allen prefers they stay focused on the things he believes matter most — preparation, focus and effort.

Perhaps Saturday's game will help Indiana (1-1, 0-1 Big Ten) get its season back on course after an up-and-down start.

Quarterback Michael Penix Jr. had two of his three interceptions returned for scores in the Week 1 loss. Last weekend, though, Penix demonstrated his resiliency by throwing two touchdown passes, running for another score and taking advantage of a special teams unit that scored twice and set up a third.

It marked the first time since September 1969 that Indiana's special teams scored twice in the same game.

So while the question most often heard around Bloomington this week is which Hoosiers team will show up against the unbeaten Bearcats, winners of 21 of their last 24, players and coaches are simply talking about staying the course.

"We were trying to get 4 yards a play and make sure we didn't have penalties, small details like that," Penix said, explaining the difference between weeks one and two. "I thought we executed at a higher level and we played a full 60 minutes. We never let up."

Boring, yes, but Allen prefers it that way — especially after getting a difficult injury report.

Backup cornerback Christopher Keys will miss the rest of the season with a torn anterior cruciate ligament he suffered against Idaho and it appears the Hoosiers will be missing defensive end James Head Jr. for the third straight week with an undisclosed injury.

But Allen also got some encouraging news.

Safety Devon Matthews left the Iowa game with an upper body injury that kept him in a nearby hospital for two nights. Matthews sat out last weekend and Allen now sounds optimistic Matthews may return this week.

Allen also hopes to have defensive backs Jonathan Haynes, a transfer from Ole Miss, and Jaylin Williams, who was injured against Iowa, back this weekend, too. It certainly would help against Cincinnati, which has won their first two games by a total of 91-21 and averaged 37.5 points last season.

"Every year it seems like a certain position is a little more challenging than others and (cornerback) seems to be our spot this year," Allen said. "Their role is going to be huge this weekend because our secondary is going to be tested by a very, very talented receiver corps and a really elite quarterback. So we just expect them to play a little better this week than we did last week. That's the whole key."

At least it seems to be the key to smoothing out the ups and downs of the first two weeks and helping the Hoosiers revert to their preferred brand of football.

"We challenge our team all the time about embracing the boredom of consistency," Allen said. "That's a powerful concept of how you stick to the process and become great and it's something we teach our guys."

Ehrlich is averaging 130 passing yards per game and he’s thrown for four touchdowns with interceptions.

Here's a look at some of the fall sports events that took place Friday and late results from Thursday, Sept. 16.

It's another broken record for IU Northwest's Emileishka De Jesus

Emileishka De Jesus tallied her 1,000th kill last month and should break 1,000 digs this week. She’ll be the first player in RedHawks history to do so.

Marin Sanchez arrived at Andrean last year as a highly-touted freshman hoping to put the 59ers over the top in a quest to get back to the Class 2A state finals.

For Munster coach Jason Grunewald and his senior class, earning back-to-back wins for the first time since 2017 feels sort of like a revenge tour.

Trey Gibson still considers himself an underdog. He can’t help it.

Here are the Region's football statistical leaders through four weeks

Idaho wide receiver Kyrin Beachem (14) attempts to make a catch while being covered by Indiana defensive back Reese Taylor (2) during the second half of Saturday's game.

Indiana wide receiver D.J. Matthews Jr. (7) attempts to stretch for a first down as he's knocked out of bounds by Idaho linebacker Coleman Johnson (10) during the Hoosiers' win on Saturday.