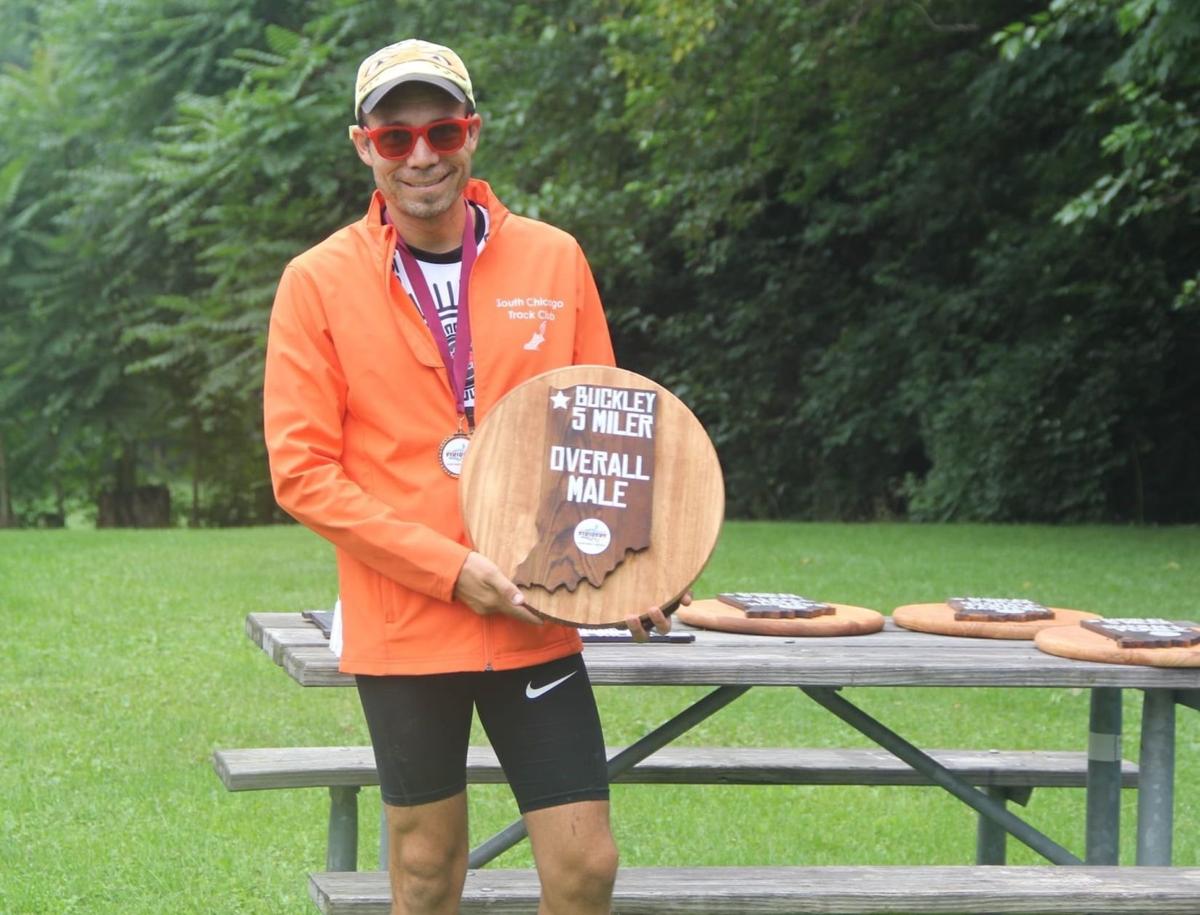 Steven Bugarin of Hammond won the overall title Saturday at the Buckley 5 Miler in Lowell. 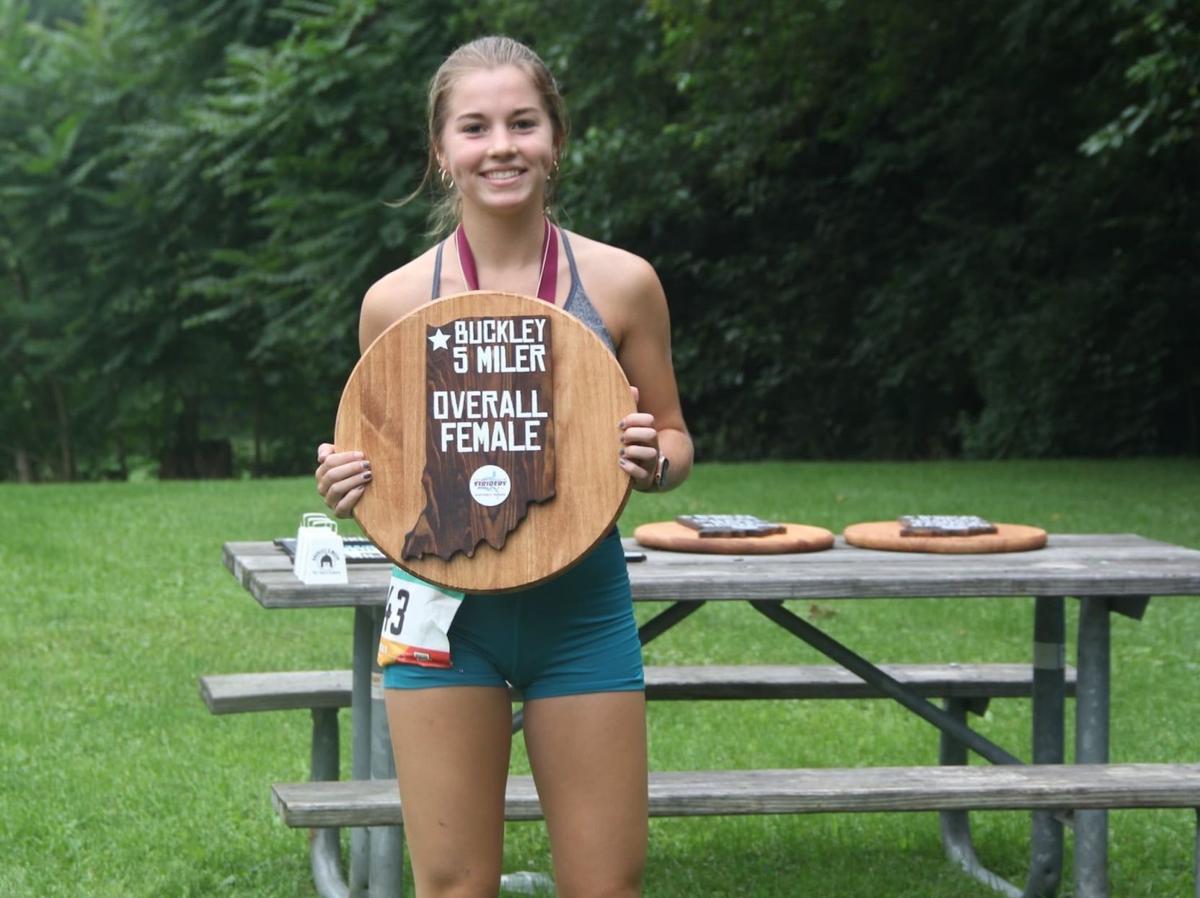 The first time Steven Bugarin participated in the Buckley 5 miler in Lowell, he was a little late for one of the earliest starts of any Northwest Indiana race.

On Saturday, Bugarin was right on time and won the overall title on the tough course with a time of 28 minutes, 54.21 seconds, nearly 30 seconds faster than runner-up Jackson Bakker of Lowell.

Unlike most Region races, Buckley’s course winds through farmland with a cross country feel to it.

“It was definitely a challenging course this year,” Bugarin said. “It was wet with some wind and the hills and tall grass — all that a cross country/trail course should have. We did get lucky it was not too hot this year.”

It’s the third win of the year for Bugarin, 35, who also won the Lotus Reach Earth Day 5K on May 1 in Valparaiso and the Brickyard 5-mile on July 3 in Hobart.

On the other hand, the female winner was about half his age and won her first local adult race in preparation for her final high school cross country season.

The Buckley course was a perfect test for Taylor Kosiek, who posted a time of 37:06.0 for the top female spot, as she heads into her senior year at Lake Central.

“The course was difficult because it has multiple hills and longer than what I normally run,” said Kosiek, who finished eighth at last year’s Crown Point Regional and fourth in the Highland Sectional. “I enjoyed running through the different settings of the course.”

It was Kosiek’s third time running the Buckley, which was canceled last year due to COVID-19. Paul Stofko of Chesterton won the male masters title in 34:09.96.

On Sunday, Charlie Greenawald of Valparaiso won the Creekside Duathlon in 54:59.72. The event consisted of a 5K run and 10K bicycle race. Greenawald bad the top times in the running (19:39) and bicycling event (33:48). Masters winner Ralph Nurse of Crown Point was second at 57:09.55.

Nathan O’Connor of Chesterton won his fifth race of the year on Saturday, traveling about 90 minutes to the east to earn that win. The 2020 Chesterton High School graduate won the Miles That Matter 10K run in Warsaw with a time of 33:59.1.

On the eve of Whiting’s annual Pierogi Fest, the fifth annual Pierogi 5K Stumble will take place on Thursday at Calumet College. Race-day packet pick up will start at 5 p.m. at the college with the race starting at 6:30. The event is being billed as a “COVID do-over” since both the race and Pierogi Fest were canceled last year.

On Saturday, the 4-H 4.mile Hustle will take place at 7:30 a.m. at the Porter County Fairgrounds. There will also be a 1.5-mile Hustle for Healthy Living starting about five minutes after the main race.

For information on both races, go to the “Upcoming Events” tab at thtiming.com.

A smiling hot dog wearing a baseball cap and a glove was unveiled Thursday as the mascot and namesake of Lake County's second team in the Northern League.

Times No. 2 Lake Central and No. 4 Valparaiso dueled for second place in the Duneland Athletic Conference, and the Indians' young core proved tough once again.

The family that bowls together wins together for LaPorte

“If I was to have the opportunity to debut this year, I sure hope it’s at home because there’s a lot of people who have been following along for as long as this has been going on.”

“I have the green light to shoot, my teammates are looking for me to shoot so I’m really enjoying it and having a blast here," said Anderson of the 17th-ranked Buccaneers.

Lake Station has zero senior leadership, instead relying on a talented junior class headlined by Willie Miller and Armoni Gonzalez, who returns after sitting last year due to COVID-19 concerns.

The IHSAA released the sectional draw Sunday via livestream.

Bringing 'The Cru' together: Valparaiso alumni team planned for TBT

"I think it’s going to be great for our program ... to get out and play with 'The Cru' across their chests with the gold and brown, I think it’ll be a great experience."

Chris Mullen had a double-double of 16 points and 12 rebounds as Chesterton remained unbeaten.

Steven Bugarin of Hammond won the overall title Saturday at the Buckley 5 Miler in Lowell.