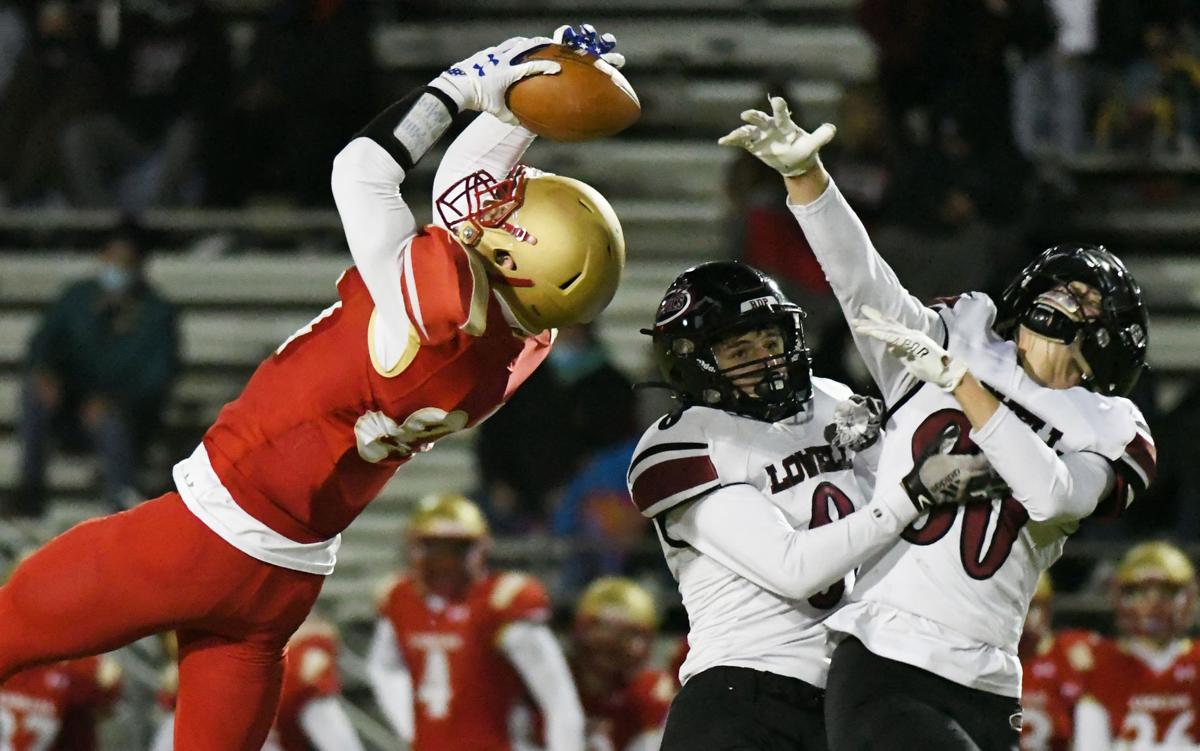 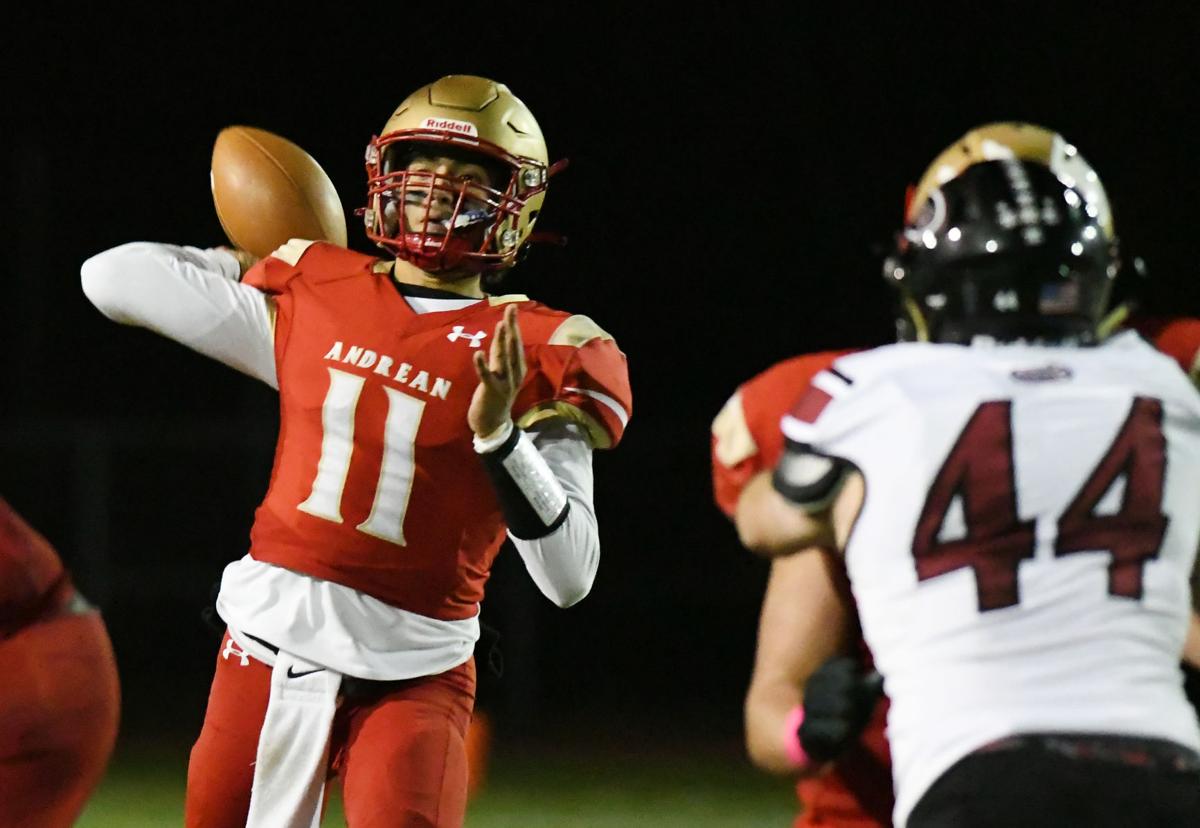 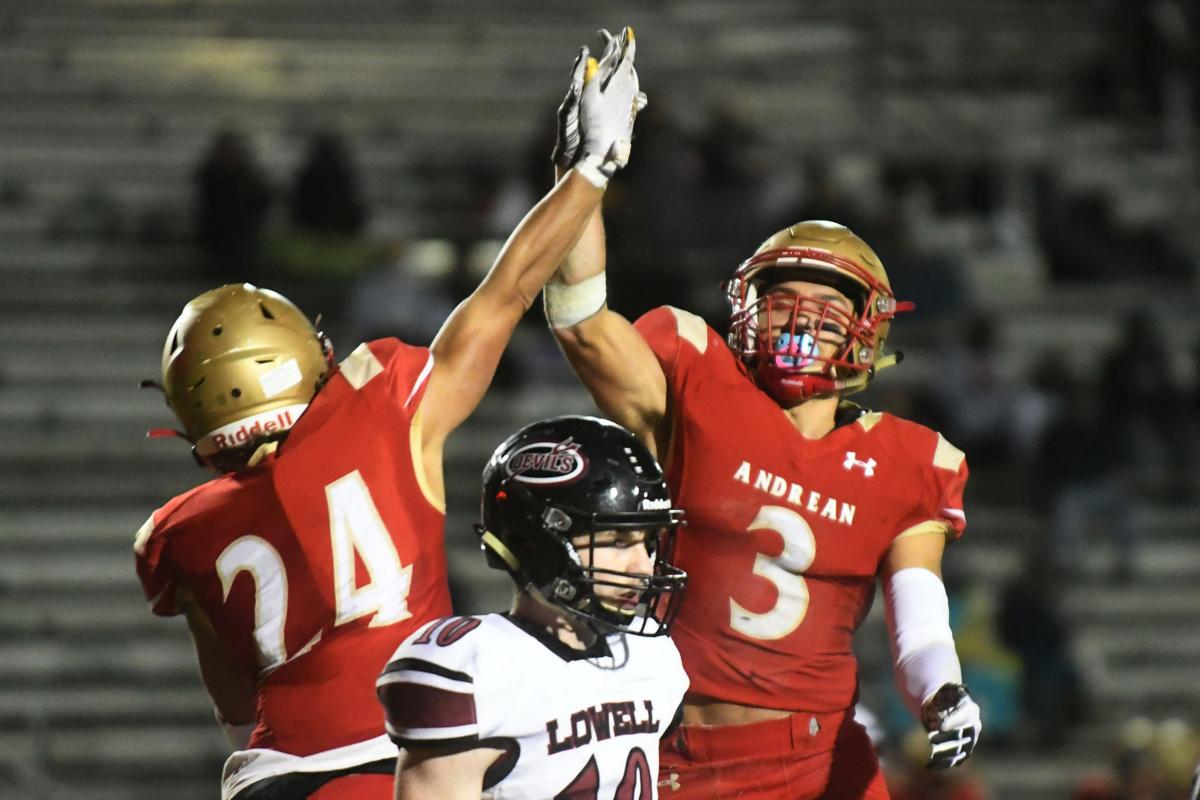 Andrean's Cam Thornton and Nicky Flesher celebrate Thornton's touchdown in the second quarter as the 59ers' take a lead over the Lowell Red Devils at Andrean High School in Merrillville Friday evening.

The Times No. 3 59ers rolled to a 35-14 victory over No. 5 Lowell to claim the conference title and an eighth consecutive victory to close out the regular season. Prior to Friday, Lowell hadn’t been beaten on the field all season but forfeited five wins, including one in an NCC game, as a result of using an ineligible player.

Had Lowell not needed to vacate its wins, the Red Devil-59er matchup would have been a de facto NCC title game. Even so, Andrean made it a moot point while taking out all the drama in a convincing win.

“This feels great,” junior receiver Paul Alonzo said. “We knew going into this that Lowell was basically an undefeated team, so we treated them like it. We made the plays we needed to to make it work out. It’s a great feeling to be a champion and to end (the regular season) like this.”

While it’s true Andrean (8-1, 5-0) didn’t need to beat Lowell (2-6, 2-2) to walk away with a championship the consensus among Alonzo and sophomore running back/linebacker Drayk Bowen was that the win was just as much a statement as anything else after Hobart took the crown a season ago.

“The coaches have been really hard on us this week because they know what we’re capable of,” Bowen said. “It’s a great feeling for us to end with a game like this with the score the way it was against a team like that.”

Andrean broke open the game over the course of two minutes and 22 seconds late in the first half where seemingly everything that could go right did.

Andrean then recovered a squib on the next kickoff and capped off the extra possession with senior receiver Nicky Flesher getting loose for a 20-yard score of his own. Cimino finished the night with four touchdown passes to four different receivers but none bigger than those late in the first half to take control of the game.

“That was a big sequence,” Andrean coach Chris Skinner said. “I think there were some big momentum swings there that were tough to overcome.”

Lowell, junior running back Joseph Heuer led the Red Devils with 25 carries for 146 yards and a touchdown but it wasn’t enough to keep up with Andrean. Lowell will next play Morton to open sectionals while Andrean will square off with Boone Grove with the NCC title in tow.

“We feel really good about how we’re playing right now,” Alonzo said. “I can’t think of a better way to go into the playoffs.”

Andrean's Cam Thornton and Nicky Flesher celebrate Thornton's touchdown in the second quarter as the 59ers' take a lead over the Lowell Red Devils at Andrean High School in Merrillville Friday evening.