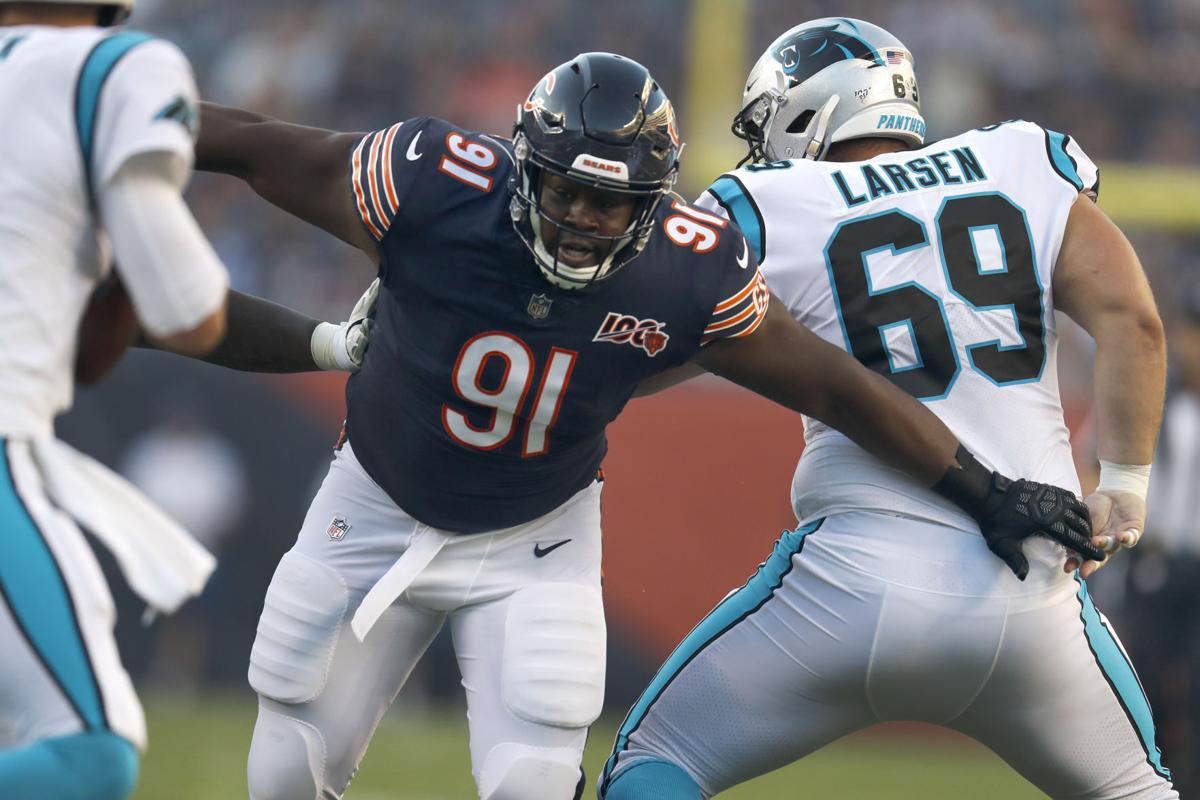 Bears nose tackle Eddie Goldman breaks through the Panthers offensive line during the first half of a 2019 preseason game in Chicago. 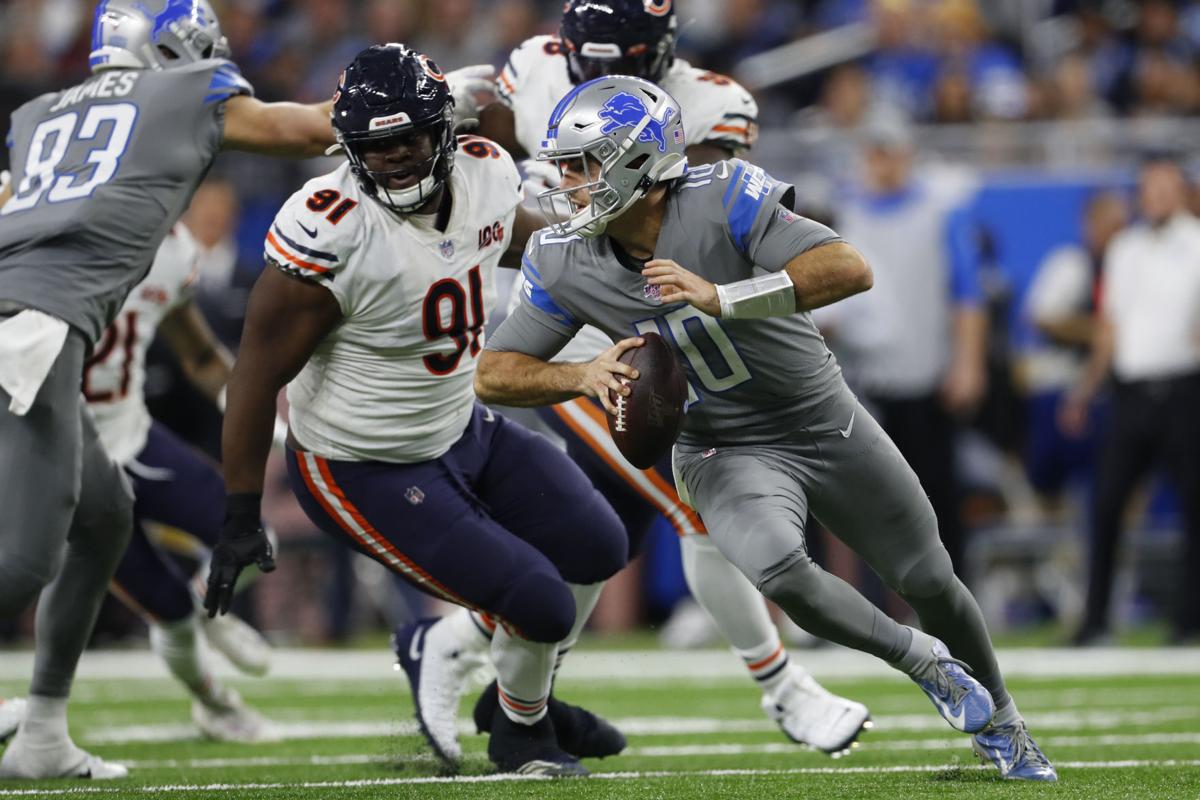 Lions quarterback David Blough (10) is chased by Bears nose tackle Eddie Goldman (91) during the second half 2019 game in Detroit.

LAKE FOREST, Ill. — The Bears' defense has turnovers to cause this season, so seeing the big guy wearing a No. 91 at nose tackle on the field for their first practice Wednesday made a huge difference.

After a COVID-19 opt-out last year and an offseason of uncertainty over his return, nose tackle Eddie Goldman is practicing with the Bears for the first time since 2019 and had linebacker Khalil Mack singing his praises.

“What he means up front, you got a nose that can take on double teams — that’s a thousand pounds — and make it look easy and shed blocks and make it hard for those running backs to get out of the backfield,” Mack said. “It’s hell for those guards and those centers.

“Just understanding his strengths, he brings all the intangibles. Not only stopping the run, but he can pass rush as well. Just having a guy like that back is huge.”

When the Bears had Goldman playing the nose and defensive end Akiem Hicks on the field together in 2018, they ranked first against the run. Stopping the run made it easier to rush the passer and the pass rush triggered an onslaught of turnovers. They caused an NFL high of 36 in 2018.

With either Goldman or Hicks out of the lineup at times the last two years, Chicago’s run defense, pass rush and turnovers dropped off.

While the Bears feel Goldman is a key to getting back to elite level, they weren’t even 100% sure he’d be at practice. He skipped mandatory minicamp and coach Matt Nagy admitted Wednesday he wasn’t certain of Goldman’s status even on Tuesday during camp-opening press conference.

“We had no idea and then I got a text message that he’s here,” Nagy said. “So I did the emoji thing with the thumbs up. And so, I was ready to go. And, um, then I hit it back with the exclamation point, the double whammy exclamation point so I was good.

“So we like having good players show up and good people, and Eddie’s a huge part of this defense.”

Goldman said he wasn’t about to miss another season and wanted to come back as soon as last season ended. He was going a bit stir crazy with little to do last year.

“It was pretty simple,” he said. “That’s all I did was train. I would run here, run there and I would just stay in the house and play with my dogs. You know?”

Being away from the Bears as they went 8-8 and made the playoffs was tough on Goldman, but he made the opt-out decision for unspecified health and family reasons.

“It was kind of painful you know?” he said. “Because when you’re used to the routine, it’s like you know what times they’re hitting the field; at this time they’re warming up; right around this time they’re having the locker room speech. You know what I mean? All of that and just being away from it just kind of killed me.”

“There was a lot of anxiety,” Goldman said. “You know what I mean? I lived and died with every play. So it was tough.”

He said he has only one regret about the opt-out.

“The only regret that I do have is just the fact that my teammates went to battle without me, you know?” he said. “That’ll be my only regret.”

Goldman expected it to be difficult.

“There is always regret when you take a step back from something you love,” he said.

Notes: The Bears were without safety Eddie Jackson for their first practice due to a hamstring injury suffered in the offseason while training. ... Second-round rookie tackle Teven Jenkins missed the first practice due to a back injury. The Bears were actually without both starting tackles with right tackle Germain Ifedi out with a quad injury. Lachavious Simmons was at right tackle and Elijah Wilkinson at left tackle for practice.

Bears nose tackle Eddie Goldman breaks through the Panthers offensive line during the first half of a 2019 preseason game in Chicago.

Lions quarterback David Blough (10) is chased by Bears nose tackle Eddie Goldman (91) during the second half 2019 game in Detroit.