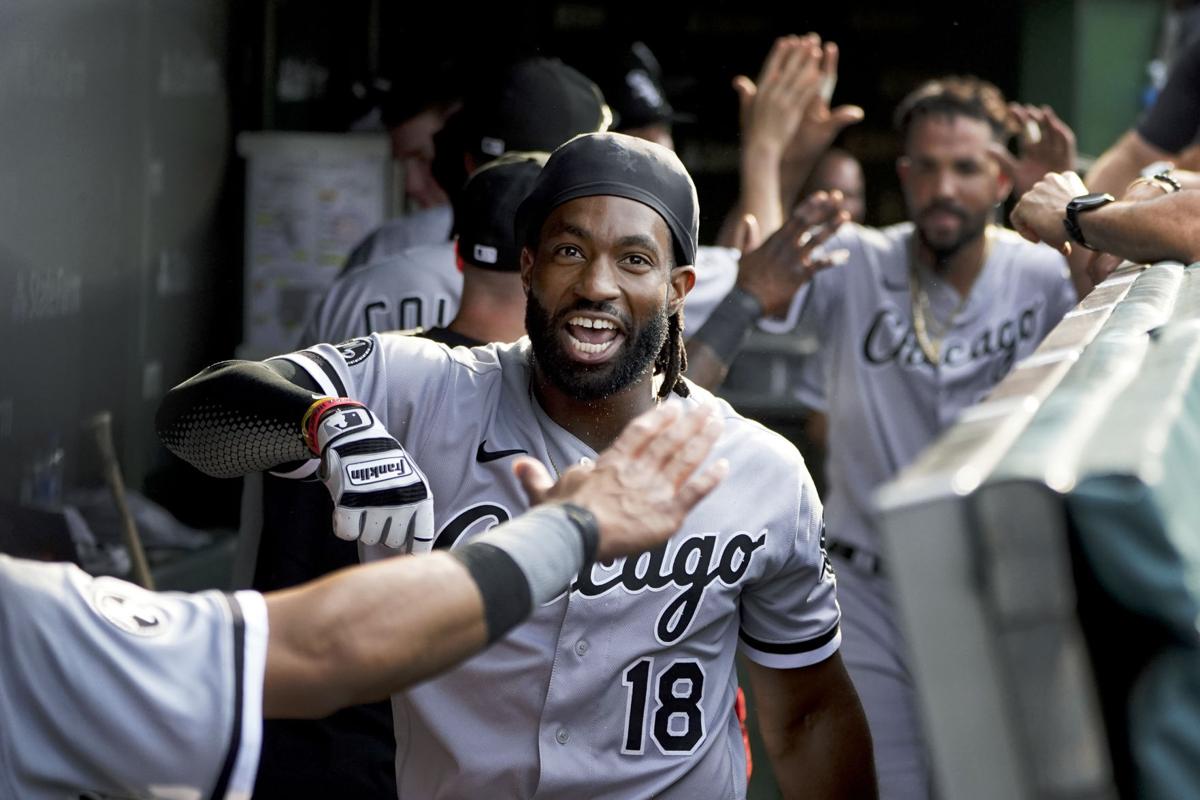 The White Sox's Brian Goodwin celebrates in the dugout after his two-run home run off Cubs relief pitcher Manuel Rodriguez during the 10th inning Friday in Chicago. Jose Abreu, background, scored on the homer. 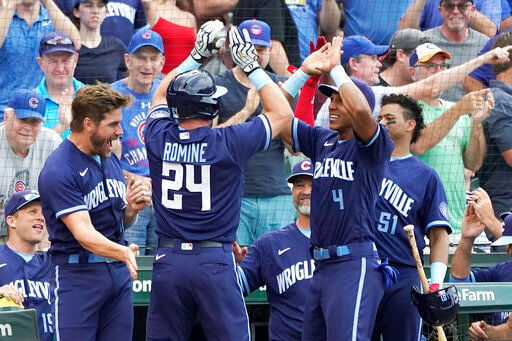 The Cubs' Andrew Romine (24) celebrates his three-run home run off White Sox relief pitcher Craig Kimbrel, outside the dugout during the eighth inning Friday in Chicago.

CHICAGO  — The White Sox had prized reliever Craig Kimbrel on the mound with a three-run lead and a win they needed in sight.

They managed to come out on top. But only after things took one wild turn.

Brian Goodwin led off the 10th inning with a two-run homer, and the White Sox regrouped after Kimbrel blew a three-run lead against his former team to beat the rebuilding crosstown Cubs 8-6 Friday at Wrigley Field.

“Fans understand the heart of this club is really, really strong, beating all the time,” manager Tony La Russa said. “Very tough. It's a shame we have to prove it like this today, but that was the difference."

Goodwin, who came in to run for Eloy Jiménez in the sixth, broke a 4-all tie with his opposite-field drive to left against Manuel Rodríguez (0-2). Pinch hitter Gavin Sheets and Tim Anderson added RBI singles to make it 8-4.

The Cubs cut it to 8-6 in the bottom half on Frank Schwindel's two-run drive against Garrett Crochet. But the left-hander retired the next three batters.

Liam Hendriks (6-2) got four outs in relief. He whiffed Ian Happ swinging at a 2-2 fastball with a runner on second to end the ninth, and the White Sox came away with the win after losing nine of 14.

The AL Central leaders were sailing along with a 4-1 lead after Lance Lynn pitched into the seventh and Cesar Hernandez homered.

The game turned when Kimbrel came in to start the eighth. The eight-time All-Star was dealt to the South Side from the Cubs as part of a selloff that also saw Kris Bryant, Anthony Rizzo and Javier Báez get traded prior to the July 30 deadline.

Kimbrel came in with numbers La Russa described as “so otherworldly," including a 0.47 ERA that was the lowest among major league relievers. But he gave up singles to Matt Duffy and Schwindel before Andrew Romine tied it with a three-run shot to right on a 3-2 fastball, his first homer since he hit four for Detroit in 2017.

“It happens to everybody,” Hendriks said.

Romine pumped his fist as he rounded the bases while fans — who haven’t had much to cheer lately — let out a loud roar. But the Cubs still lost for the eighth time in 10 games.

“I'm no dummy,” Romine said. “I know who's on the mound when I'm coming up in that situation. I was really just trying to find a hole somewhere, trying to get a pitch that I could do something with. ... These short fences kind of helped a little bit.”

Andrew Vaughn and Seby Zavala gave the White Sox a 2-0 lead in the fourth with RBI singles against Kyle Hendricks.

Hernandez, acquired from Cleveland on July 29, made it 4-1 in the eighth when he greeted Kyle Ryan with a two-run drive to left-center. The home run was his first with the White Sox after hitting 18 with the Indians.

Lynn gave up a run and four hits, struck out eight and walked two. La Russa let him bat with the bases loaded and two out in the sixth, only to watch as Kyle Hendricks strike him out on three pitches.

Lynn exited with a 2-0 lead after Romine led off the seventh with a bunt single. The All-Star right-hander threw 100 pitches. Michael Kopech gave up a sacrifice fly to pinch hitter David Bote with one out before Aaron Bummer retired Patrick Wisdom on a fly to right to end the threat.

Tied for the major league lead with 13 wins, Hendricks gave up two runs and seven hits. The right-hander struck out seven and walked three.

Cubs: Five-time Gold Glove OF Jason Heyward (inflammation in his left index finger) was placed on the 10-day injured list. Manager David Ross said the finger has been bothering Heyward for “a pretty good bit” and he aggravated it taking batting practice at Colorado this week. Heyward is batting .198 with six homers and 22 RBIs. The Cubs also recalled OF Greg Deichmann from Triple-A Iowa. He was acquired July 26 from Oakland in the deal that sent reliever Andrew Chafin to the Athletics.

The White Sox's Brian Goodwin celebrates in the dugout after his two-run home run off Cubs relief pitcher Manuel Rodriguez during the 10th inning Friday in Chicago. Jose Abreu, background, scored on the homer.

The Cubs' Andrew Romine (24) celebrates his three-run home run off White Sox relief pitcher Craig Kimbrel, outside the dugout during the eighth inning Friday in Chicago.