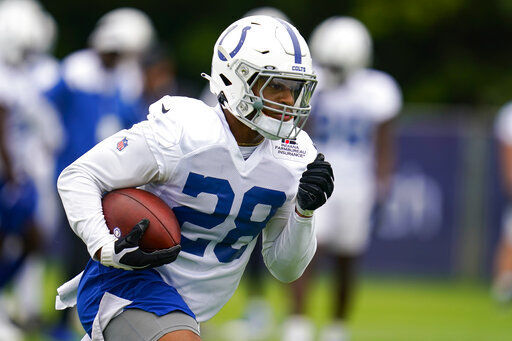 Colts running back Jonathan Taylor runs a drill during practice Saturday at training camp in Westfield. 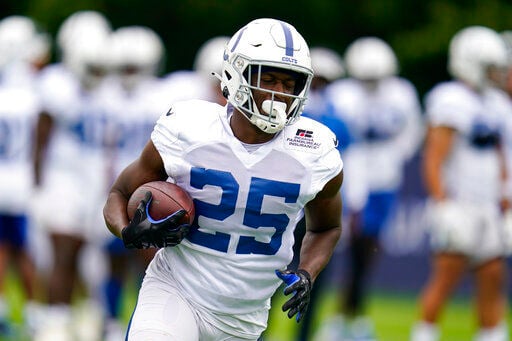 Colts running back Marlon Mack runs a drill during practice Saturday at training camp in Westfield.

Marlon Mack focused on getting healthy.

Now the two 1,000-yard runners are back at training camp, getting acclimated to their new roles and giving Colts coach Frank Reich a glimpse of how this two-man tandem could be effectively deployed this season.

“A lot of people have said this is going to be my second first year," Taylor said. “Last year was really, really fun, so I can't imagine what this year is going to be.”

The Colts are counting on Taylor to pick up where he finished his rookie season after learning some hard lessons about life in the NFL.

Indianapolis drafted Wisconsin's workhorse back in the second round, ignoring critics who contended he was overworked in college and had a penchant for fumbling. Taylor studied hard so he could hit the ground running during a training camp with no preseason games because of the COVID-19 pandemic.

Initially, the Colts slotted Taylor behind Mack, the soon-to-be free agent who produced the best season of his career in 2019. But everything changed in the second quarter of the season opener when Mack suffered a season-ending torn Achilles tendon. Suddenly, Taylor became the starter and it didn't take long to see his potential.

“I told him to be patient because I knew he was going to explode like he did. You could tell," Mack said. “I told him ‘Once it comes, they're going to love you like they did in college.'"

By midseason, though, Taylor was struggling. His inability to make quick decisions stunted the Colts ground game and for the first time in his football career Taylor spent more time watching from the sideline than lining up in the backfield. During a three-game stretch in November, he logged just 24 carries for 61 yards.

Eventually, the persistent power runner rebounded, reclaiming the starting job during an impressive performance in a crucial victory over Green Bay — only to sit out the next week because of COVID-19.

When he returned, Taylor rekindled memories of his college days by running 97 times for 651 yards and seven scores over the final five regular-season weeks, posting a college-like 6.7 yards per carry. Taylor wound up rushing for 1,169 yards, a per-carry average of 5.04, and had even bigger aspirations as the full-time starter in 2021.

“Those last few games really kind of catapulted me into the offseason that, ‘Hey, this is going to be the expectation now,' " Taylor said. “So, going into this year coaches and teammates are like, ‘Hey, J.T. can play at this level, he can play with this level of intensity.'"

Mack understands the pecking order — he's No. 2 on the depth chart now, even though he's fully healthy.

But the 25-year-old former South Florida star isn't complaining. He's happy to be working in this running back room and to have a chance to prove himself again after signing a one-year deal.

In fact, the Colts may lean on Taylor and Mack even more in September — if quarterback Carson Wentz isn't back. Wentz and three-time All-Pro guard Quenton Nelson are both expected to miss five to 12 weeks after having surgery this week to remove fragments from their feet, and the recently signed Brett Hundley is the only other quarterback on Indy's roster to throw an NFL pass.

Reich said he spoke with Nelson after Tuesday's procedure and Nelson, who has started all 51 career games (including the postseason) intends to keep that streak intact.

“You all know Quenton has an intensity about him, and I can assure you after having the procedure that intensity hasn’t changed one bit," Reich said. "Just talking about how he’s going to approach the next few weeks, to continue to get better every day. He’s not going to waste a day. He’s already given me his plan every day how he’s getting better."

Taylor and Mack know how critical it would be to have Nelson and center Ryan Kelly back in the lineup for opening day. Kelly hasn't practiced since last Thursday and is expected to miss at least one more week after hyperextending his left elbow in a collision with Mack as Indy continues to search for Anthony Castonzo's replacement at left tackle.

Two-time Pro Bowler Eric Fisher is on the physically unable to perform list as he continues to rehab from the torn Achilles tendon he suffered in January. The Colts don't expect Fisher to return until late September or early October.

But regardless of who's blocking in front of them, the Colts believe Taylor and Mack can be a knockout pairing.

“Marlon is a smooth operator, he was primed for a big year last year," Taylor said. “It sucked, it was unfortunate what happened last year, but be on the lookout this year."

Send us a photo demonstrating your Bears, Packers or Colts fandom with a note explaining why you’re such a fanatic, along with your contact information.

Submissions will close on Sept. 8. That will be followed by a week of online voting that will take place Sept. 9-15. The winners will be announced on Sept. 16. Entries will be placed in Bears, Packers or Colts galleries as they are received. The biggest fan for each team will win a $25 Gift Card!

Also, predict the Win/Loss record for each team for your chance to WIN an additional prize!

Get more information and enter the contest by clicking here.

Results from all of Sunday's NFL Week 1 games

Colts running back Jonathan Taylor runs a drill during practice Saturday at training camp in Westfield.

Colts running back Marlon Mack runs a drill during practice Saturday at training camp in Westfield.