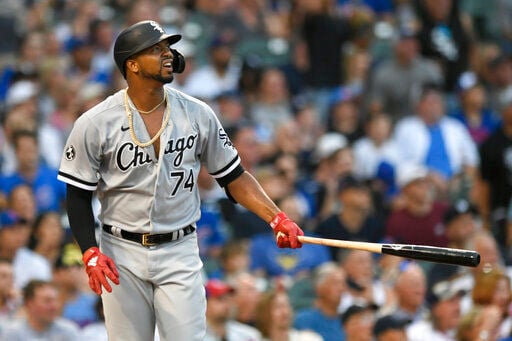 The White Sox's Eloy Jiménez watches his two-run home run during the first inning Sunday against the Cubs at Wrigley Field in Chicago. 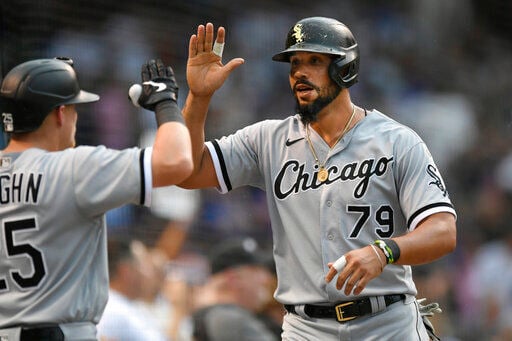 The White Sox's Jose Abreu (79) celebrates with teammate Andrew Vaughn (25) after scoring on a Eloy Jiménez double during the second inning Sunday against the Cubs at Wrigley Field in Chicago.

CHICAGO — Eloy Jiménez drove in five runs with two homers and a double, and the White Sox beat the crosstown Cubs 9-3 on Sunday night for their first sweep of a three-game series at Wrigley Field since May 2012.

Jiménez and Andrew Vaughn hit two-run shots after Tim Anderson led off the game with a solo drive as the White Sox hit Zach Davies hard in a five-run first inning. The outburst put the AL Central leaders ahead early on a warm night with the wind blowing out at the iconic ballpark.

Anderson also finished with three hits as the White Sox won their fourth straight and moved 10 ½ games ahead of second-place Cleveland. The Cubs have dropped four straight and 10 of 12.

Dylan Cease (9-6) labored, but got through five innings and won for the first time in three starts against his former team. The right-hander allowed three runs on five hits and three walks. He struck out 10.

Reynaldo Lopez, Ryan Tepera and José Ruiz followed with four scoreless, one-hit innings. Ruiz struck out the side in the ninth.

Jiménez continued to pound the pitching of the Cubs, who traded him, Cease and two prospects to the White Sox for José Quintana in July 2017. In 10 games versus the North Siders, the 6-foot-4, 240-pound left fielder is batting .389 with five homers, five doubles and 10 RBIs.

Jimenez’s homers were his second and third in nine games since returning from a torn pectoral tendon that kept him out since spring training.

Frank Schwindel had two RBIs and Rafael Ortega had two hits for the Cubs.

Davies (6-9) gave up seven runs on seven hits and lasted just two innings in his third straight loss. The righty has allowed 18 runs in his last 12 innings.

Anderson lined Davies’ first pitch into the right-center bleachers. Jiménez launched the first pitch he saw over the wall in center with Adam Engel on first. After Yoán Moncada walked, Vaughn lined his 13th homer to left-center.

Jiménez’s double down the left field line in the second drove in two and increased the lead to 7-0.

Schwindel’s pinch-hit single in the bottom half cut it to 7-2. Greg Deichmann trimmed it to 7-3 with a bloop in the third.

Jiménez added a solo shot to right in the fifth to make it 8-3. Vaughn singled in the final run in the seventh.

Rizzo, off to a quick start with New York since being acquired from the Cubs on July 29, was the fourth Yankees player within the past week to be sidelined by the coronavirus. He said in June he was not vaccinated.

White Sox: Manager Tony La Russa said CF Luis Robert (right hip flexor tear) will rejoin the team on Monday in Minnesota after wrapping up a minor league rehab stint that concluded with Triple-A Charlotte. Robert, a Gold Glove winner as a rookie in 2020, was hurt running to first on May 2. La Russa said he wanted to meet with Robert before easing him back into the lineup.

Cubs: Milwaukee RHP Freddy Peralta (8-3, 2.21) will start the opener of a four-game series in Chicago on Monday. The Cubs had not named a starter.

The White Sox's Eloy Jiménez watches his two-run home run during the first inning Sunday against the Cubs at Wrigley Field in Chicago.

The White Sox's Jose Abreu (79) celebrates with teammate Andrew Vaughn (25) after scoring on a Eloy Jiménez double during the second inning Sunday against the Cubs at Wrigley Field in Chicago.