PITTSBURGH — Justin Fields nearly had his moment in the spotlight on "Monday Night Football."

The rookie quarterback guided the Bears to a go-ahead touchdown against Pittsburgh with 1:46 remaining, but Ben Roethlisberger responded with the 50th game-winning drive of his 18-year career. Chris Boswell hit a 40-yard field goal with 26 seconds left and the Steelers escaped with a 29-27 win.

"For Justin to lead that offense down there and finish with a touchdown was really good, but in the end we didn't finish," Bears coach Matt Nagy said. "We gave them a chance to make that field goal in the end to win it and that's where we're at."

Making his seventh NFL start, Fields completed 17 of 29 passes for a career-high 291 yards with a touchdown and an interception. He also ran for 45 yards, but the Bears lost their fourth straight and fell to 3-6 overall.

Still, the youngster displayed poise and promise in the second half for a Chicago offense — and passing attack — that ranks last in the league.

It was the second straight week of progress for Fields, as the No. 11 overall draft pick described a growing sense of confidence in his own game following an 11-point loss to San Francisco. In that one, the former Ohio State standout threw for 175 yards, rushed for 103 and produced several highlight-reel plays.

One week later, he almost led the Bears all the way back from 14 points down early in the fourth quarter.

"I was just playing football," Fields said. "I felt good."

That's when Nagy saw something in his new quarterback.

"I looked over at Justin and he had a smile on his face where it was like it was his time," Nagy said. "To see that … it was like he was almost hoping that this was going to be the situation and for him to follow through, and make the plays he made, it was a really good feeling on the sideline."

On the go-ahead drive, Fields called his own number to convert a third-and-1. He later connected with Allen Robinson for a 39-yard strike down the right sideline on third-and-2 and found Darnell Mooney for a 16-yard touchdown pass on the next play, giving Chicago a 27-26 lead with 1:46 left.

"My mindset was like, it's time … we're here," Fields said. "You can either be the guy who always gets put in that position and doesn't show up, or you can be the guy who shows up in big moments. I was calm and focused on just showing up."

Fields did more than that. Unfortunately for the Bears, they left too much time on the clock for Roethlisberger and the Steelers.

"We know we're on the brink of being a great offense," Fields said. "We just have to keep working."

Fields led the Bears on a 12-play drive that resulted in a 30-yard field goal at the end of the second quarter. But that was the lone bright spot during a difficult first half, as Chicago trailed 14-3 at the break. On that final first-half series, the Bears were faced with first-and-goal from the 10-yard line, but couldn't punch it in after a short run and a pair of incomplete passes.

The Bears punted on their first two possessions and Fields threw an interception on the third drive, leading to Pittsburgh's second touchdown. After a three-and-out, the Bears moved deep into Pittsburgh territory, but a sack knocked the offense out of field-goal range.

It was a different story after halftime, as Chicago scored on three of six second-half possessions.

Cairo Santos kicked his second field goal on Chicago's opening drive of the second half, but the Bears had a touchdown wiped off the board following a low-block penalty.

Fields brought Chicago back within reach following another Pittsburgh touchdown. The rookie had a pair of completions that went for 20-plus yards, setting up Mooney's 15-yard touchdown run that pulled the Bears to 20-13 early in the fourth quarter.

The offense got help from the special teams unit when DeAndre Houston-Carson returned a fumble 25 yards for a touchdown that made it 23-20.

Boswell's 52-yard field goal made it 26-20 with 2:52 remaining, setting the stage for Fields' go-ahead touchdown toss to Mooney just inside the left sideline.

After the Steelers went back in front, the Bears got the ball back with 26 seconds to go and no timeouts. Fields got them to midfield before Santos' 65-yard field goal attempt fell well short.

"When you talk about the growth for him and the offense and our team in general, that's a moment," Nagy said. "But in the end, we lost and when you're in the locker room, this is a team game, and that's what we care about."

Temperatures to plummet lower than they have in years

Temperatures to plummet lower than they have in years 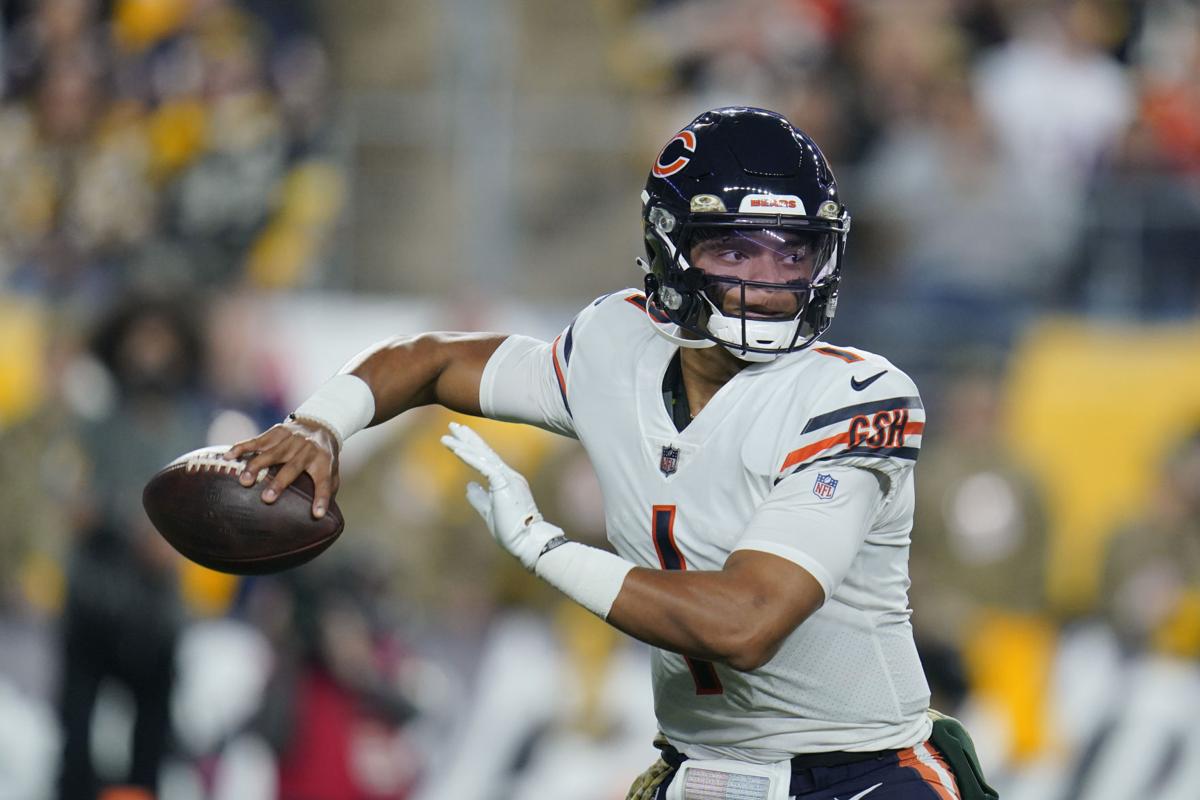 Bears quarterback Justin Fields (1) looks to pass against the Pittsburgh Steelers during the first half of Monday night's game. 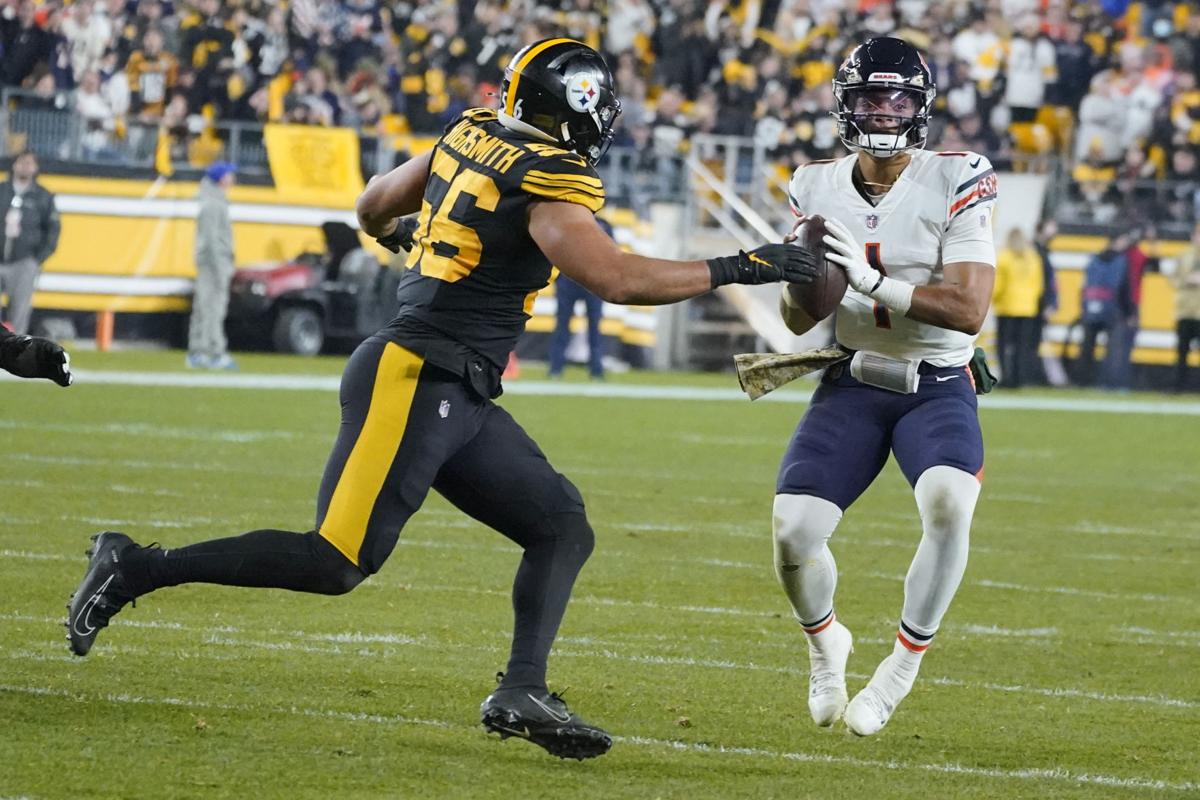