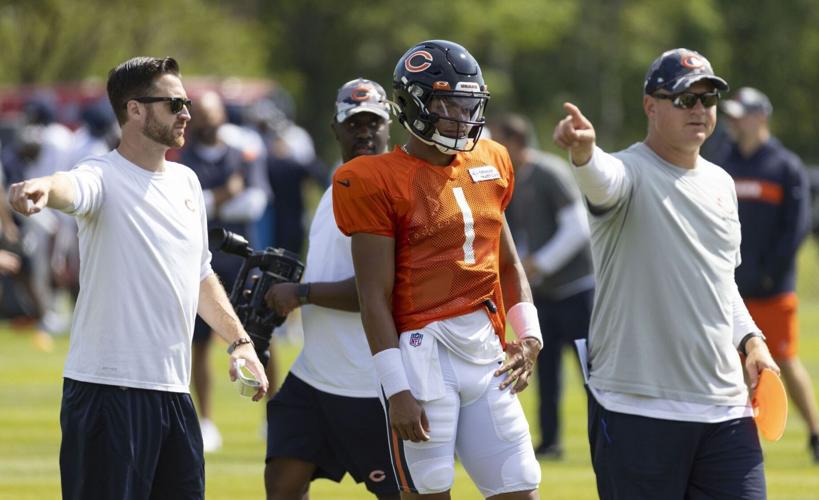 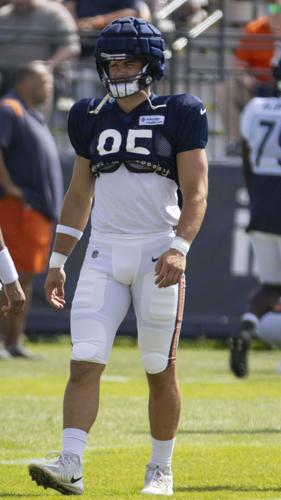 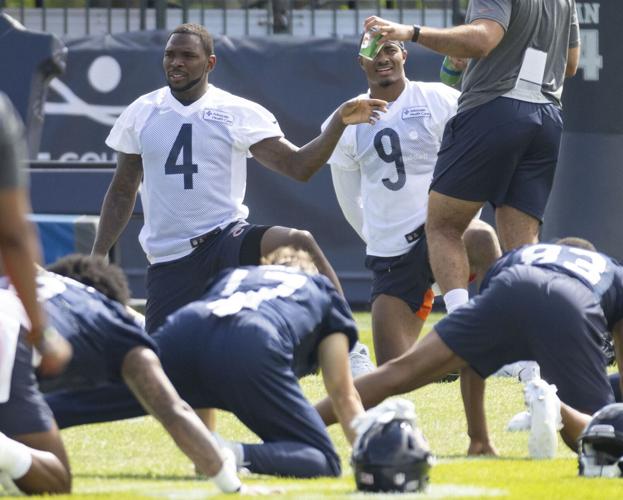 LAKE FOREST, Ill. — After a day off, the Chicago Bears resumed practice in pads Friday at Halas Hall.

1. Tight end Cole Kmet said practice was one of the hardest in which he has participated.

Kmet said the tempo, speed and physicality — and the expectations from coaches that players move quickly from drill to drill — added up to a practice that players had to grind through.

“Today was a day, for sure,” wide receiver Darnell Mooney said. “I was laid out in the locker room after today.”

“You definitely felt it today,” safety Eddie Jackson said. “Me and coach Alan (Williams) were on the sideline, talking like … ‘You can do two things. You can either tap out and stop and cry and complain. Or you can just step up.’ And when you get through stuff like that, that shows what good teams are made of.”

Getsy said coaches set out to challenge the players’ conditioning from the start Friday, and he plans to keep an eye on who fared well — and who didn’t — when he watches film.

“That will be something I’m going to pay attention to, see who lost their focus and who lost their discipline and stuff when they got challenged today,” Getsy said.

The Bears offense played quite a bit against their scout team defense to provide a new look.

“We’ve got two teams in our division that play a three-down, and our defense doesn’t,” Getsy said. “When you’re talking about the big guys up front, everything changes in your rules and assignments when you have three-down. So you’ve got to mix that in.”

2. Eddie Jackson said he is ‘at ease with everything’ as he enters his 6th season with the Bears under a new coaching staff.

The Bears veteran safety and defensive leader has talked about how Eberflus let him know this season was a fresh start. And Jackson said he’s entering that phase feeling good mentally, physically and emotionally.

“You’re at peace and just comfortable with the team we have, the way we’re working, the scheme, everything we’ve been through so far, the coaches,” Jackson said. “I’m just getting that feel that everyone’s comfortable and just ready to work, man.”

Jackson was open about not being happy with his production over the last couple of years. That included no interceptions in 2020 or 2021 after he totaled 10 in his first three seasons. And so he made the decision to embrace the new staff rather than be annoyed he had to start over with another set of coaches.

“I just feel like the years I had, I wasn’t satisfied with them, didn’t live up to expectations and standards that I set for myself,” Jackson said. “So to go out there this year is like a whole new start, whole new season, whole new team. I feel like a rookie coming in again, just learning, soaking up this game, man, and leading my guys the way I work and the way I do things.”

Rodgers went on the Aubrey Marcus Podcast this week and talked about how his experience using the psychedelic drug ayahuasca improved his mental health the last two seasons.

Getsy, who was Rodgers’ quarterbacks coach in Green Bay, laughed when asked if he had accompanied Rodgers on the trips.

“I was not invited on those trips,” Getsy said. “I didn’t know all that stuff. … Whatever it takes, I guess.”

Of course, Getsy spent more of his time talking about Justin Fields and how the Bears quarterback is managing the ups and downs of learning a new offense.

“This is a process, right? And we stress every single day that we’re a process-driven team, and our unit is the same way,” Getsy said. “And it’s all about making sure we get better every single day. Whether the focus is on getting better at our protection adjustments or our hot adjustments or throwing hot routes — whatever that adjustment is or whatever that emphasis of the day is, we just have to make sure we’re getting better at it.

“And then the situational stuff, he can’t get enough of that. You’re talking about what makes the great quarterbacks great. It’s just that experience in dealing with all the different situations.”

4. The Bears practiced without four of their cornerbacks.

Thomas Graham Jr. will be out for a while with a hamstring injury, Eberflus said earlier this week. But Bears cornerbacks Kyler Gordon, Kindle Vildor and Duke Shelley also sat out Friday, watching practice from the sideline. Eberflus won’t address the media until Saturday to potentially explain their absences.

Offensive tackle Teven Jenkins and defensive end Robert Quinn were among the other players missing from practice.

For Micah Dew-Treadway and other hometown kids, the chance to play for the Chicago Bears will be monumental: ‘I’m about to do this.’

Micah Dew-Treadway is in the NFL as an undrafted rookie fighting for a roster spot on the team he grew up rooting for.

This will be Cairo Santos' third consecutive season calling Soldier Field his home stadium. Since rejoining the Bears in 2020, he has attempted 27 field goals and 31 extra points there, an archive of experience to draw from.

The Chicago Bears beat the Kansas City Chiefs 19-14 in the preseason opener Saturday at Soldier Field. Here’s what you need to know about the game.

With center Lucas Patrick out with a right hand injury, Chicago Bears turn to Sam Mustipher and rookie Doug Kramer

The Chicago Bears face more questions on their offensive line after center Lucas Patrick suffered a right hand injury that will keep him out a significant amount of time.