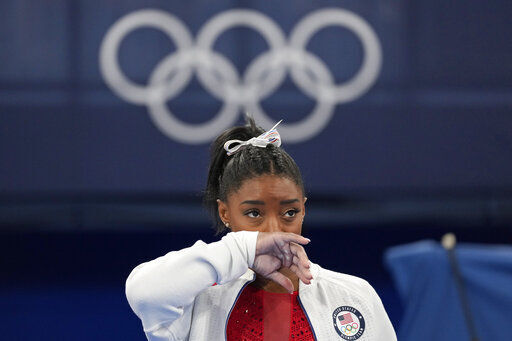 Simone Biles says she wasn't in right 'headspace' to compete and withdrew from gymnastics team final to protect herself. 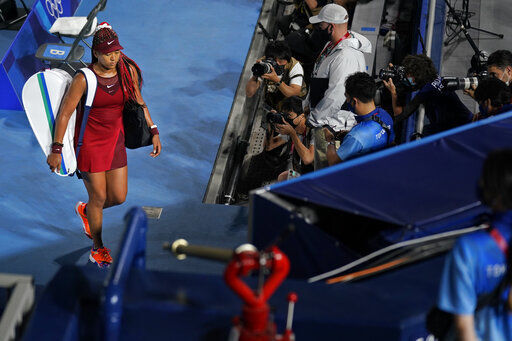 Naomi Osaka leaves center court after being defeated by Marketa Vondrousova, during the third round of the tennis competition at the 2020 Summer Olympics on Tuesday in Tokyo.

TOKYO — For decades, they were told to shake it off or toughen up — to set aside the doubt, or the demons, and focus on the task at hand: winning. Dominating. Getting it done.

For years, Simone Biles was one of the very best at that. Suddenly — to some, shockingly — she decided she wasn't in the right headspace.

By pulling on her white sweatsuit in the middle of Tuesday night’s Olympic gymnastics meet, and by doing it with a gold medal hanging in the balance, Biles might very well have redefined the mental health discussion that’s been coursing through sports for the past year.

Michael Phelps, winner of a record 23 gold medals and now retired, has long been open about his own mental health struggles. Phelps has said he contemplated suicide after the 2012 Olympics while wracked with depression. Now an analyst for NBC's swimming coverage, he said watching Biles struggle “broke my heart.”

“Mental health over the last 18 months is something people are talking about,” Phelps said. “We’re human beings. Nobody is perfect. So yes, it is OK not to be OK."

Biles joins some other high-profile athletes in the Olympic space — overwhelmingly females — who have been talking openly about a topic that had been taboo in sports for seemingly forever.

• Tennis player Naomi Osaka withdrew from the French Open, never went to Wimbledon and, after her early exit in Tokyo this week, conceded that the Olympic cauldron was a bit too much to handle.

• American sprinter Sha’Carri Richardson made no secret of the issues she faced as she prepared for an Olympic journey that never happened. She said she used marijuana to help mask the pain of her birth mother’s death, to say nothing of the pressure of the 100 meters.

• Dutch cyclist Tom Dumoulin left training camp in January to clear his head, saying he was finding it "very difficult for me to know how to find my way as Tom Dumoulin the cyclist.” He resumed training in May; on Wednesday, he won a silver medal in the men’s individual time trials.

• Liz Cambage, a WNBA player who competes for Australia, pulled out of the Olympics a week before they opened because of anxiety over entering a controlled COVID bubble in Tokyo that would have kept her friends and family away.

“Relying on daily medication to control my anxiety is not the place I want to be right now. Especially walking into competition on the world's biggest sporting stage,” she wrote on social media.

Biles, though, took things to a new level — one that now makes it thinkable to do what had been almost unthinkable only 24 hours before. She stepped back, assessed the situation and realized it would not be healthy to keep going.

On Wednesday, she pulled out of the all-around competition to focus on her mental well-being.

“I have to do what’s right for me and focus on my mental health, and not jeopardize my health and well-being,” a tearful Biles said after the Americans won the silver medal in team competition. She said she recognized she was not in the right headspace hours before the competition began.

“It was like fighting all those demons,” she said.

The International Olympic Committee, aware of the struggles young athletes face, increased its mental health resources ahead of the Tokyo Games. Psychologists and psychiatrists are onsite in the Olympic village and established a “Mentally Fit Helpline” as a confidential health support service available before, during and for three months after the Games.

The 24-hour hotline is a free service that offers in more than 70 languages clinical support, structured short-term counseling, practical support and, if needed, guidance to the appropriate IOC reporting mechanisms in the case of harassment and/or abuse.

The IOC-developed Athlete365 website surveyed more than 4,000 athletes in early 2020, and the results led the IOC to shift its tone from sports performance and results to mental health and uplifting the athlete’s voices.

“Are we doing enough? I hope so. I think so,” IOC spokesman Mark Adams said Wednesday. “But like everyone in the world, we are doing more on this issue.”

Naoko Imoto, a swimmer at the 1996 Atlanta Games, is a consultant on gender equity for the Tokyo Olympic Committee. She said Osaka's admission in early June about mental-health struggles represented an opening for a discussion largely avoided.

“In Japan, we still don't talk about mental health,” Imoto said. "I don't think there's enough of an understanding on mental health, but I think there are a lot of athletes coming out right now and saying it is common.”

Australian swimmer Jack McLoughlin choked back tears after winning the silver medal in the 400-meter freestyle Sunday, describing how the pressures of training during a pandemic while also pursuing an engineering degree nearly caused him to quit the sport.

“That’s all to my family and friends. They really helped me out, I was really struggling," McLoughlin said. “I train up to 10, 11 times a week, so to do that when you are not 100% sure you’re actually going to get where you want to be is pretty hard.”

Particularly with the world watching. John Speraw, coach of the U.S. men's volleyball team and the son of a psychologist, hired a specialist to assist his athletes when he coached at UC Irvine. He was an assistant on two Olympic teams before advancing to be the head coach for the Rio Games. There, he noticed his players were posting on Facebook — during the actual opening ceremony.

“To me, it was the most striking,” he said. "I think we are very conscious of the increased scrutiny and external pressure and expectations that it places on our athletes.”

Thriveworks, a counseling, psychology, and psychiatry services with more than 300 locations, found that one in three elite athletes suffer from anxiety and depression. In an analysis of more than 18,000 data points from print, online, broadcast and social media sources covering track and field, swimming, tennis, gymnastics and soccer, 69% of negative mentions were about female athletes compared to 31% about male athletes.

It showed that when the focus is on an individual athlete, coverage becomes less enthusiastic with a 29% negative tone that exemplifies the public pressure and criticism athletes face, said Kim Plourde, a licensed clinical social worker at Thriveworks who works with elite athletes through the Alliance of Social Workers in Sport.

“Female athletes have to manage a different level of expectations from themselves, coaches, other athletes, media, and fans ranging from their physical appearance to their performance,” Plourde said.

Jenny Rissveds of Sweden was the youngest women's cross-country mountain biking champion when she won gold in Rio at 22. A year later, two deaths in her family triggered depression she still deals with. Rissveds failed to win a second consecutive gold, finishing 14th in Tokyo, but she was elated to be done with competition.

“I’m just so (expletive) happy that it’s over,” she said. "Not just the race. But all these years, to not have to carry that title any more. I have a name and I hope that I can be Jenny now and not the Olympic champion, because that is a heavy burden.

“I hope that I will be left alone now.”

Olympics online and inside

Did Mike McCarthy buy himself some time?

Did Mike McCarthy buy himself some time?

Tailgating, face-painted fans back in force at NFL stadiums

Tailgating, face-painted fans returned in full force at stadiums around the country as the NFL opened its doors to capacity for the first time since the coronavirus pandemic.

Results from all of Sunday's NFL Week 1 games

Also in sports digest: Gavit grad Emanuel Daggett will remain with the Valparaiso track program after completing his competing career in the spring.

Simone Biles says she wasn't in right 'headspace' to compete and withdrew from gymnastics team final to protect herself.

Naomi Osaka leaves center court after being defeated by Marketa Vondrousova, during the third round of the tennis competition at the 2020 Summer Olympics on Tuesday in Tokyo.