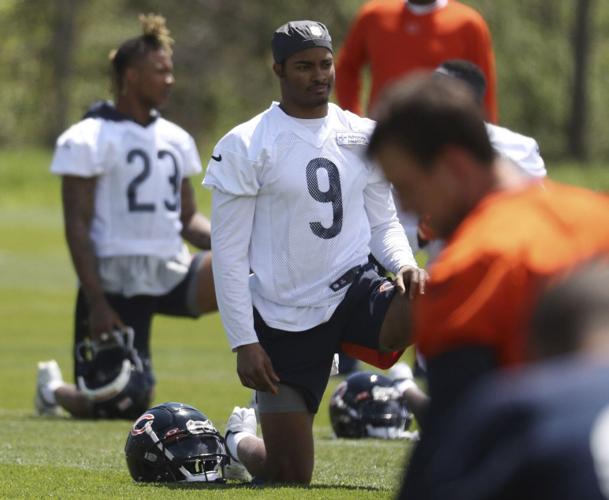 Cornerback Jaquan Brisker works out during Bears organized team activities on May 17 at Halas Hall. 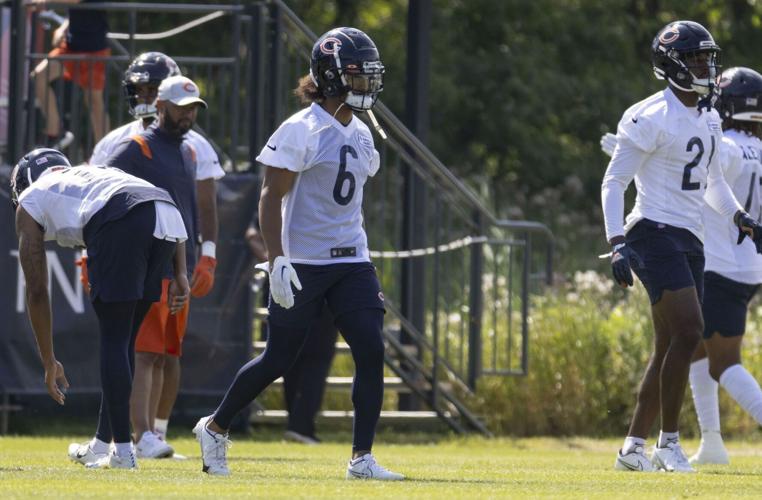 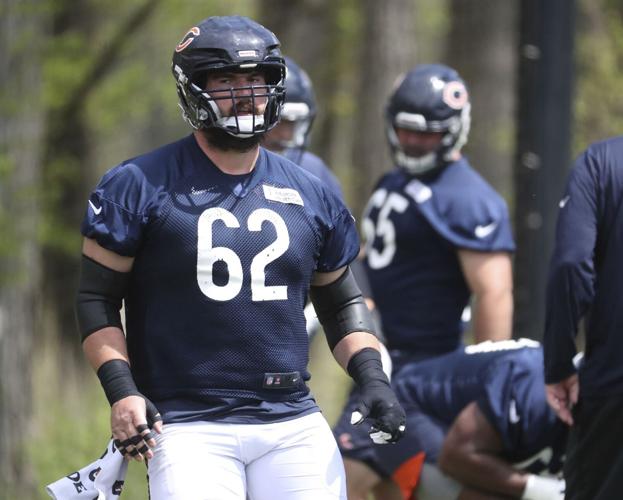 Center Lucas Patrick works out during Bears organized team activities on May 17, 2022, at Halas Hall in Lake Forest.

LAKE FOREST , Ill. — The Chicago Bears held their second practice of training camp Thursday morning at Halas Hall, the first open to the public with a strong crowd on hand for the action.

The 90-minute practice moved quickly with the most notable absence being inside linebacker Roquan Smith, who is on the physically unable to perform list. He spent some time with his position group during individual drills and could be seen chatting with teammates.

Here are three things we learned.

1. The Bears are going to work through a variety of combinations on the offensive line.

They probably didn’t figure three rookies would be working with the first team on Day 2 of camp. But that is where they found themselves Thursday after center Lucas Patrick was escorted off the field by a trainer following an unknown injury.

Suffice to say that isn’t how the team plans to protect quarterback Justin Fields, especially not after adding Reiff and fellow veteran Michael Schofield this week. It is good to put players in different positions and evaluate them. Down the road, the hope for general manager Ryan Poles is that some of the late-round linemen in his first draft class show starting ability.

Not spotted at practice was Teven Jenkins, the 2021 second-round pick who missed all of camp and preseason last summer with a back injury that led to surgery.

Coach Matt Eberflus has been purposefully evasive about health-related information, so what update he will provide after practice Friday remains to be seen. Patrick had no problem walking off the field, and the injury appeared to be to the right side of his upper body. He was seen driving out of the facility as practice ended.

Offensive coordinator Luke Getsy sounded as if the additions of Reiff and Schofield provided him with a level of comfort.

“I’m excited to see all those guys work,” Getsy said. “But I’m glad we were able to add more pieces and we got two vets that you talk about just two pros that we added to the room. Whether they are part of that (starting) five or not, they’ve added a ton to that room already.”

The rookie is working at right cornerback and in the slot as the nickel back. That is an indication of how physically gifted the Bears believe Poles’ top draft pick is and that they believe he can handle the mental preparation required to learn two positions at once after Gordon missed much of the offseason program with an unspecified injury.

“I was excited,” Gordon said. “I had a feeling that they were going to tell me I was going to play nickel when we were doing OTAs, so I was prepared for that. When they told me, honestly, I had the biggest smile on my face because I love nickel and I love what I can do there, so it’s just been really fun.

“You just get to be more (involved versus) the run game, just a different job. I feel like me at nickel, I’m just a twitchy dude so I just like to react a bunch. I just enjoy it and to be able to be in the run fit too. Just a lot of different things I can do there and to really show all of my abilities.”

Eberflus has talked about the Bears potentially being in their sub package as much as 80% of the time, so the nickel is a key position, one that featured one of the best and most versatile players on defense when the coach was the coordinator in Indianapolis with Kenny Moore at his disposal.

The challenge for Gordon will be proving he understands all of the moving parts when he slides inside because it’s more complicated than lining up on the outside, where he also can excel.

“He’s just a freak athlete, man,” free safety Eddie Jackson said. “If you see him, like, some of the plays he makes, it’s not even his man. He’s coming off his man, making plays on the ball. So just seeing how very instinctive he is. He’s smart. He’s willing to learn. He talks less, he takes everything in. When you have a guy like that, you know he’s going to be special.”

3. Strong safety Jaquan Brisker also has impressed Jackson with his desire to learn.

“We’ve been meeting,” Jackson said /of Poles’ second second-round selection. “Sometimes he comes to my house, we sit down, we watch film. He’s asking a lot of questions. All the right questions. I just try to give him tips like how to play this, how to play this, I was too high. Hearing him coach himself up and the little things. It just shows you that he’s going to have a lot of success in his career because he pays attention to the little things that most guys don’t pay attention to.

“The very first day I told him (I would help him). He was like ‘Yo! Can I come over and watch film?’ We ate and watched film, stuff like that. Like I said ‘Quan and Ky, there’s a lot of those guys, Jon (Alexander), all those guys. A.J. (Thomas), Elijah (Hicks), they are all learning. They ask a lot of questions and you see that they apply it on the field. They are working hard, keeping their head down and continuing to work.”

After a day off, the Chicago Bears resumed practice in pads Friday at Halas Hall. Offensive coordinator Luke Getsy and several players spoke with the media afterward. Here are four things we learned.

With center Lucas Patrick out with a right hand injury, Chicago Bears turn to Sam Mustipher and rookie Doug Kramer

The Chicago Bears face more questions on their offensive line after center Lucas Patrick suffered a right hand injury that will keep him out a significant amount of time.

Robert Quinn says he’s on board with the Chicago Bears despite speculation: ‘I’ve been traded twice. You get tired of moving.’

Robert Quinn’s absence from Chicago Bears mandatory minicamp six weeks ago fueled speculation that the veteran defensive end wanted to be traded as the team undergoes a renovation.

NFL star J.J. Watt offers to help woman pay for funeral so she can keep his shoes, jersey

A woman offered to sell J.J. Watt memorabilia to help pay for her grandfather's funeral. Watt said he would help, tweeting "Sorry for your loss."

Cornerback Jaquan Brisker works out during Bears organized team activities on May 17 at Halas Hall.

Center Lucas Patrick works out during Bears organized team activities on May 17, 2022, at Halas Hall in Lake Forest.