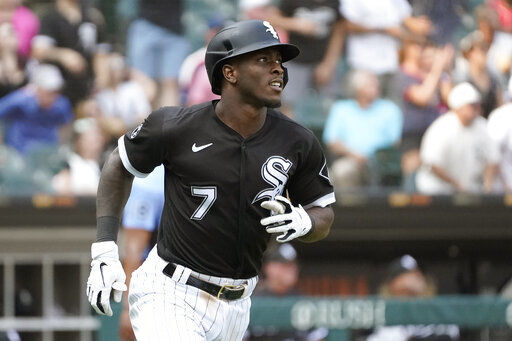 The White Sox's Tim Anderson watches his home run off Minnesota Twins starting pitcher Griffin Jax during the third inning Monday in Game 1 of a doubleheader in Chicago. 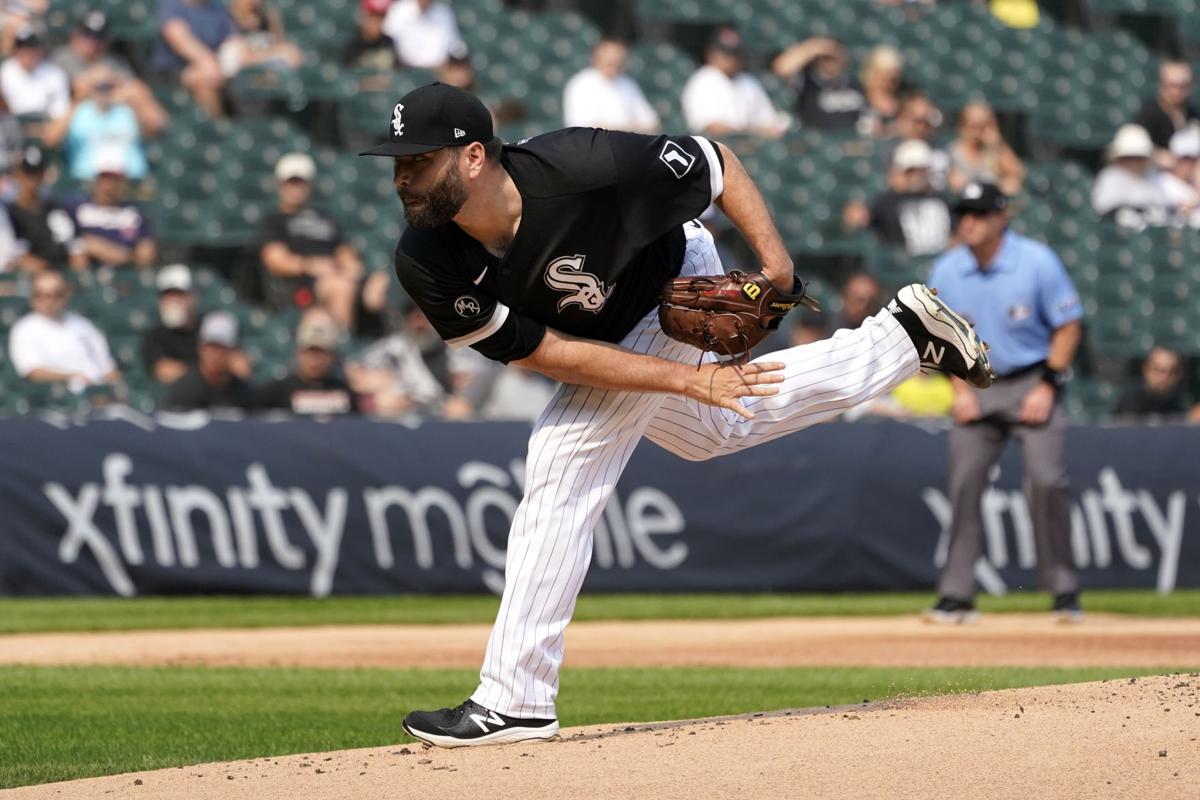 White Sox starting pitcher Lance Lynn follows through during the first inning of a Monday against the Twins in Chicago.

CHICAGO — Nelson Cruz hit a sacrifice fly in the eighth inning after tying the game with a solo homer in the sixth, and the Minnesota Twins beat the White Sox 3-2 Monday in the first game of a doubleheader.

Jorge Polanco added an RBI single in the eighth as Minnesota ended a three-game losing streak and beat division rival Chicago for just the third time in 13 games. Gavin Sheets hit a three-run home run in the bottom of the seventh, as the Sox rallied for a 5-3 win in the nightcap.

Gilberto Celestino, the Twins' automatic runner at second, advanced to third in the eighth on Luis Arraez’s single off Garrett Crochet (2-5). Josh Donaldson hit a sharp grounder to Jake Burger at third. Burger slipped, and Celestino was able to return to third, leaving the bases loaded.

After Trevor Larnach struck out, Cruz hit his fly to center off Ryan Burr to put Minnesota ahead. Polanco’s single made it 3-1.

Tyler Duffey (2-2) pitched a scoreless seventh, working around two walks, for the win.

Tim Anderson homered for the third straight game and extended his hitting streak to a career-high 16. Anderson was Chicago’s automatic runner in the eighth and scored on Jose Abreu’s double, but Hansel Robles held on for his 10th save in 12 chances.

“He’s swinging it well,” White Sox manager Tony La Russa said of Anderson. “He’s playing at a consistently very high level and it’s one of the big reasons why we are where we are.”

Lance Lynn allowed one run on five hits in seven innings in a no-decision, lowering his AL-leading ERA to 1.94. The 34-year-old right-hander struck out four and walked one in first start since he signed a new $38 million, two-year contract with Chicago that covers 2022 and 2023.

“He was outstanding as always," Russa said. “He missed his location on the one pitch to Cruz.”

Minnesota’s Griffin Jax allowed just one hit — Anderson’s solo shot — in four innings while striking out six and walking one in his second career start. The Twins added the 26-year-old right-hander to their roster from Triple-A St. Paul as the 27th man for the doubleheader.

Jax might have gone longer had a blister on his pitching hand hadn't flared up,

“I had noticed it in the fourth inning,” Jax said. ""I was just worried that if I continued to go out there with the blister, that I wouldn't be able to throw my pitches with as much intent or aggressiveness as I had been early in the game."

Anderson connected on Jax’s 2-0 fastball with two outs in the third to put Chicago ahead 1-0.

Cruz’s 19th homer, into the left-field bullpen with two outs in the sixth, tied it at 1.

White Sox CF Luis Robert will begin a rehab assignment with Class A Winston-Salem on Wednesday. The 23-year-old, one of Chicago's top prospects, has been out since suffering a torn right hip flexor on May 2.

“I never experienced an injury as severe as that one,” Robert said through an interpreter on a video conference call with reporters. “I wasn't expecting to have the process go as fast as it's gone. I'm just excited.”

Jax is a captain in the U.S. Air Force Reserve and the first Air Force Academy graduate to play in the majors.

Twins: C Mitch Garver (groin contusion) was activated from the 10-day injured list between games of the doubleheader — started the second contest and homered in his first at-bat. Garver hasn’t played since June 1, when he was struck by a foul tip in Baltimore and needed surgery.

Minnesota starts ace RHP José Berríos (7-3, 3.48 ERA) in Monday's second game against Chicago RHP Reynaldo Lopez (0-0, 0.00). The 27-year-old Lopez was in Chicago’s rotation the previous three seasons, but has spent most of 2021 with Charlotte.

Also in sports digest: Gavit grad Emanuel Daggett will remain with the Valparaiso track program after completing his competing career in the spring.

DETROIT (AP) — Justin Tucker set an NFL record with a 66-yard field goal, bouncing it through off the crossbar as time expired to lift the Baltimore Ravens to a 19-17 win over the Detroit Lions on Sunday.

The White Sox's Tim Anderson watches his home run off Minnesota Twins starting pitcher Griffin Jax during the third inning Monday in Game 1 of a doubleheader in Chicago.

White Sox starting pitcher Lance Lynn follows through during the first inning of a Monday against the Twins in Chicago.