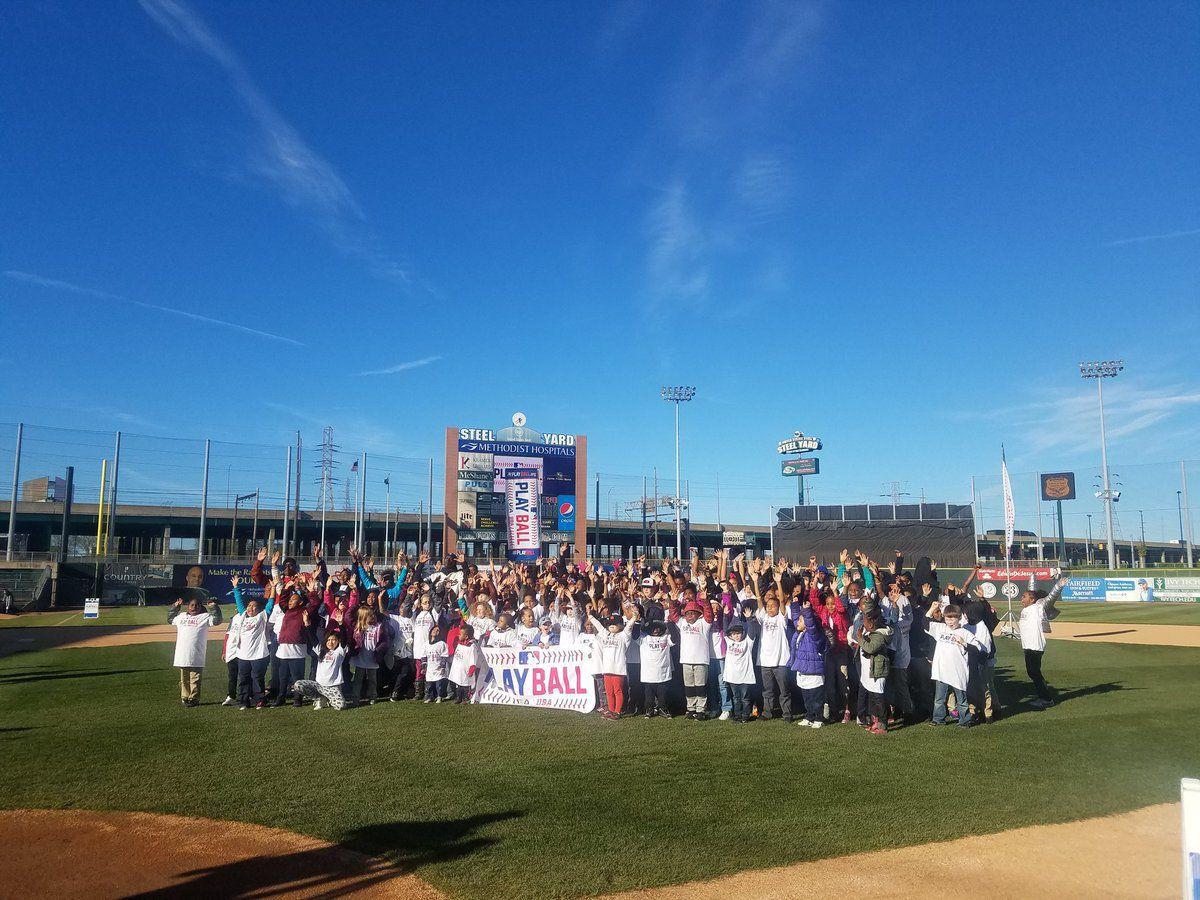 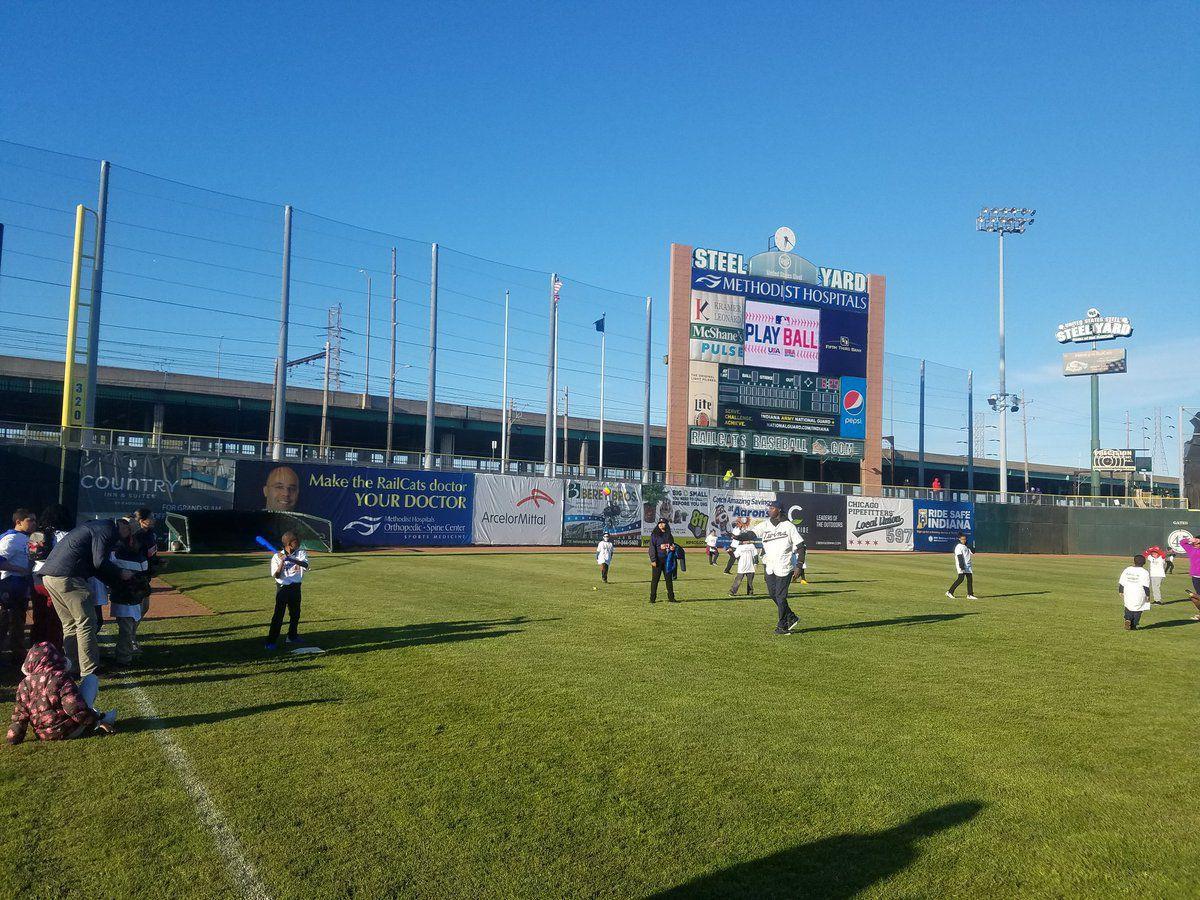 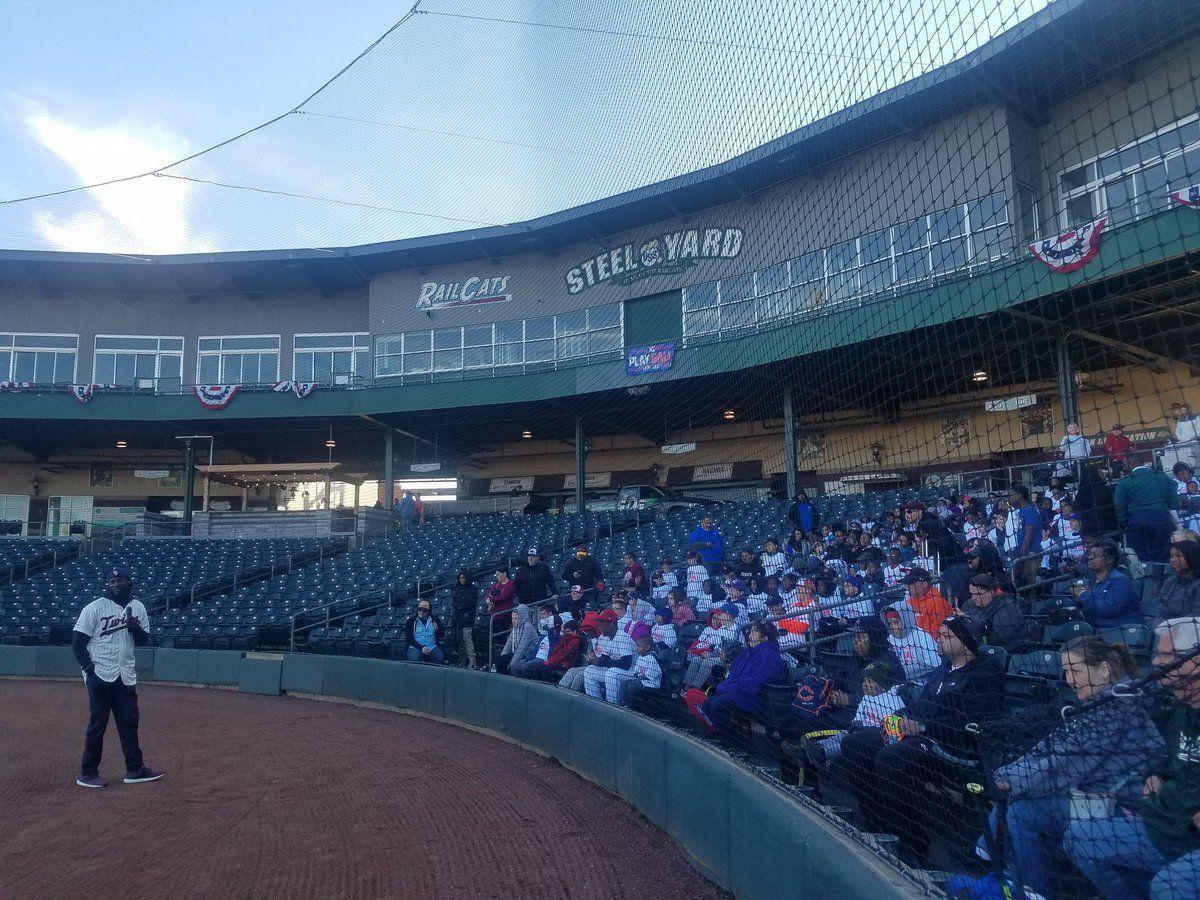 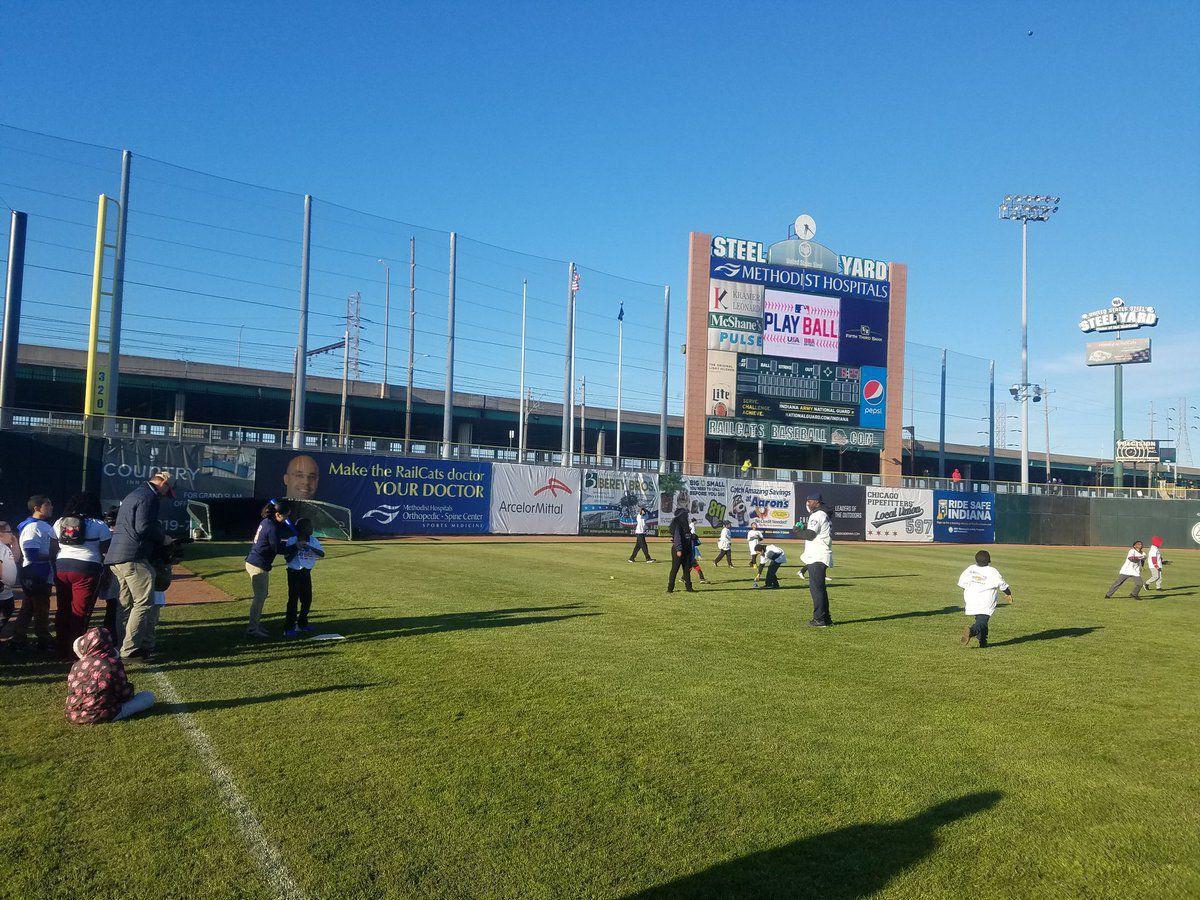 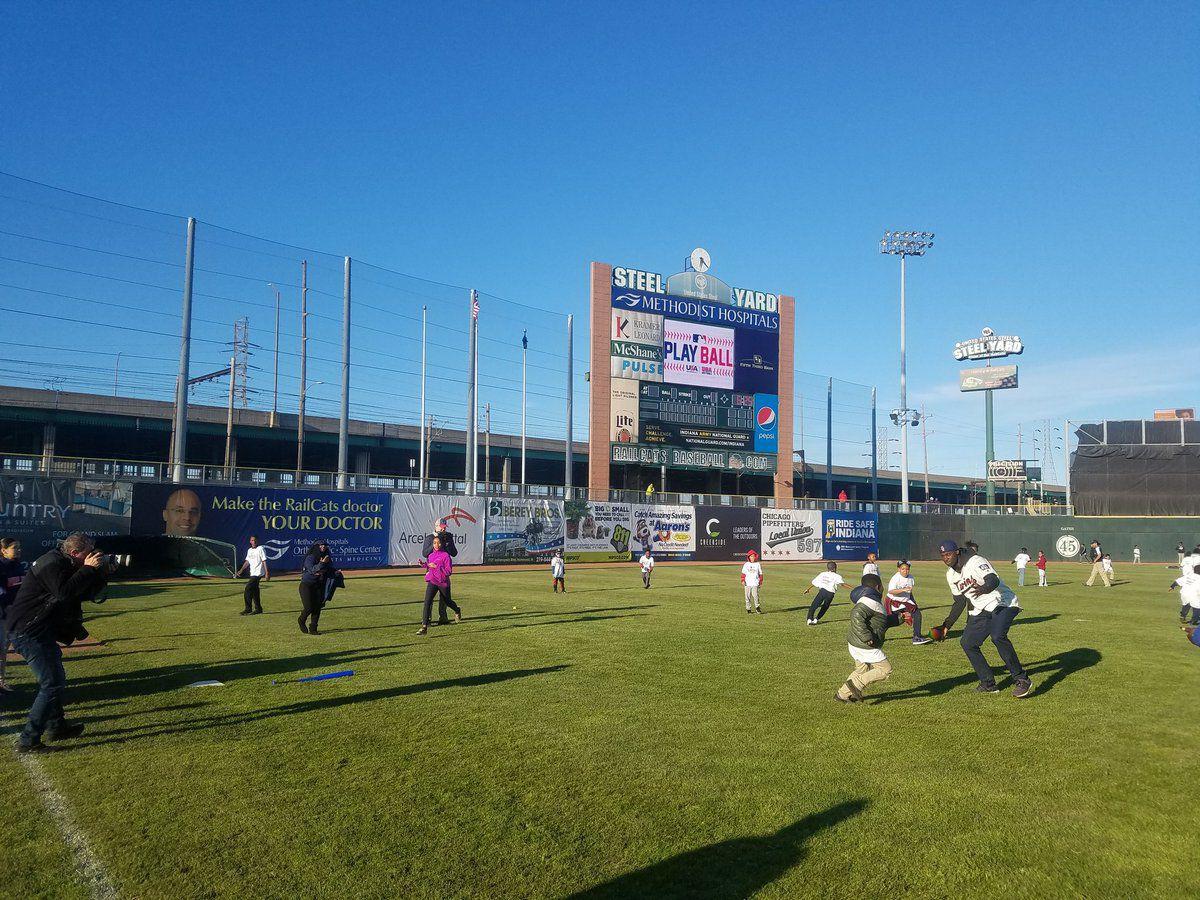 About a year ago at MLB headquarters in New York, Reagins pitched the idea of bringing the league’s “Play Ball” initiative to Gary. When he did, he saw Sarah Padove’s hand shoot up. The Hammond native and former Marian Catholic softball standout was in.

“She jumped at it from the start,” Reagins said.

Padove was instrumental in organizing and developing what became Friday’s Play Ball event at U.S. Steel Yard, home to the Gary SouthShore RailCats. About 200 kids participated in baseball drills and activities alongside Hawkins, a 21-year MLB veteran who now works in the Minnesota Twins’ front office.

“This was my first passion project,” Padove said. “As soon as I saw Play Ball I knew I wanted to bring it to Northwest Indiana. You’ve got two great markets with the Cubs and Sox and great fans here. To do something like this in Gary with the RailCats in this community is an honor.”

Participants included kids as young as 4 and as old as 13 with varying skill sets. The Boys and Girls Clubs of East Chicago, Gary and Hammond bussed dozens of children into the ballpark where even more kids were waiting to join them.

Hawkins and guest coaches ran station-to-station drills allowing kids opportunities to hit, catch, throw and run bases. These sorts of events have been held all across the world including cities in the United States, Brazil, Canada, Mexico, Panama and Puerto Rico.

“The motto today was 'have fun,' and I think the kids did,” Hawkins said. “Some of them might never play again. Some might be fans. Either way, they’re out here enjoying themselves.”

Hawkins added that being at the event in person was particularly important. The original plans were for May 17, but he convinced Reagins to move things up a week because of a prior television commitment.

“I told him it needed to be on a day that I could get out here because if MLB is going to show up and show out and do something like this in my city, I wanted to be a part of it,” Hawkins said.

Having Hawkins involved was a must, Reagins said, because of his ties to the area and commitment to growing the game, particularly among blacks who are chronically underrepresented at the MLB level.

All participants left the free event with a ball, bat, shirt and wristband. A few even took hacks against Hawkins’ pitching.

“LaTroy and I talked about Gary and the baseball played around here a lot,” Reagins said. “I felt it was important to come here. The people, the history, the relationships, the kids of all colors. You need that in baseball. This is what we’re all about.”

While Hawkins was playing with the kids, Padove ran around the field doing everything she could to keep the “organized chaos” in control. She’s been in her current role in Baseball and Softball development for a little more than a year after spending five previous years with MLB’s legal team.

“At the end of the day, my job is to grow the game however we can,” she said.

Padove, 32, calls working with MLB her dream job. She said she knew in high school she one day wanted to work in baseball but didn’t quite know how. She wound up playing softball at Indiana and interning for the Fort Myers Miracle and Brockton Rox before completing her law degree at Marquette University.

The transition into Baseball and Softball Development allows Padove to be more hands-on in her work, which she said has been fulfilling. After all the kids had filed off the field, Padove leaned up against the RailCats dugout and smiled.

“This couldn’t have gone any better,” she said. “I’m so proud that we did this here.”

The coronavirus put an end to Maddie Russin's prep career, but the Crown Point senior has persevered.

“You want to give it the best. You want to have the kids running around. Can you imagine the finals if we can’t put up the bleachers or have anybody in (to watch),” Olympia Lanes general manager Mike Kozy said.

The RailCats decided to do a Virtual Opening Day event culminating in a simulated game against the Milkmen to be broadcast on the team's YouTube channel.

Counting down Valparaiso University's top 10 players in the 2010s: Numbers 1-5

Portage pitcher Tyler Nemtuda, who missed most of his sophomore season because of a gallbladder issue, lost his entire senior campaign because of the coronavirus pandemic.

Counting down Valparaiso University's top 10 players in the 2010s: Numbers 6-10

He never wanted the spotlight. Talking about himself, that wasn’t easy. But basketball, he always made that seem simple.

The Hall-of-Fame Jazz coach who played at Evansville and for the Bulls died.

The IHSAA and IHSA are members of the National Federation of State High School Associations, which essentially sets the rules and issues the guidance that the individual state associations enforce and follow.

BLOOMINGTON — Khristian Lander, one of the nation's top point guards, has signed a national letter of intent to play basketball next season at…