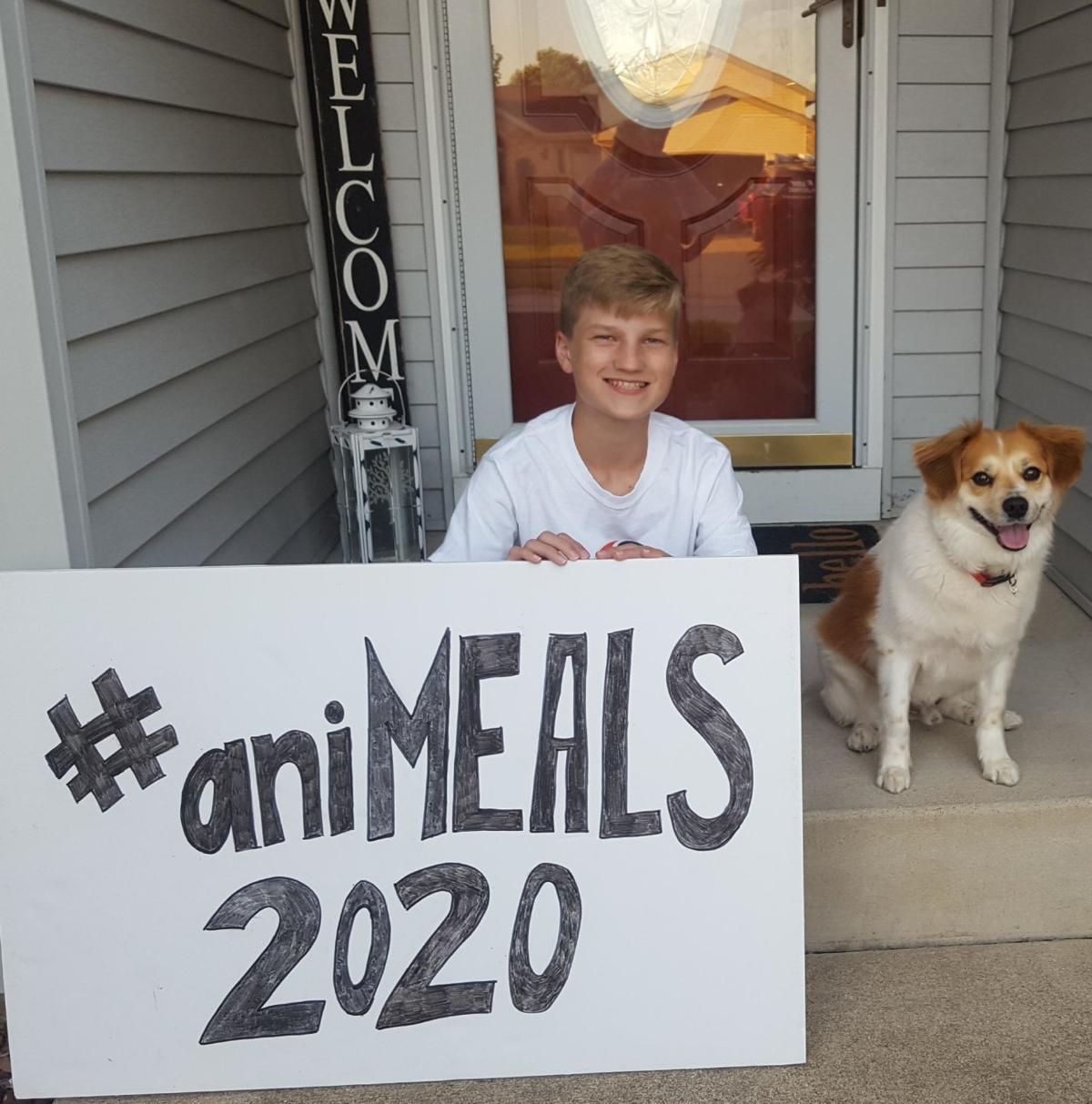 Craig Rusin sits with his dog, Spot, who is the inspiration for Rusin's aniMEALS2020 campaign to receive 2,020 pounds of dog food to donate to the Schererville Animal Shelter. He has raised 3,983.5 pounds and hopes to reach 5,000 pounds by year's end. 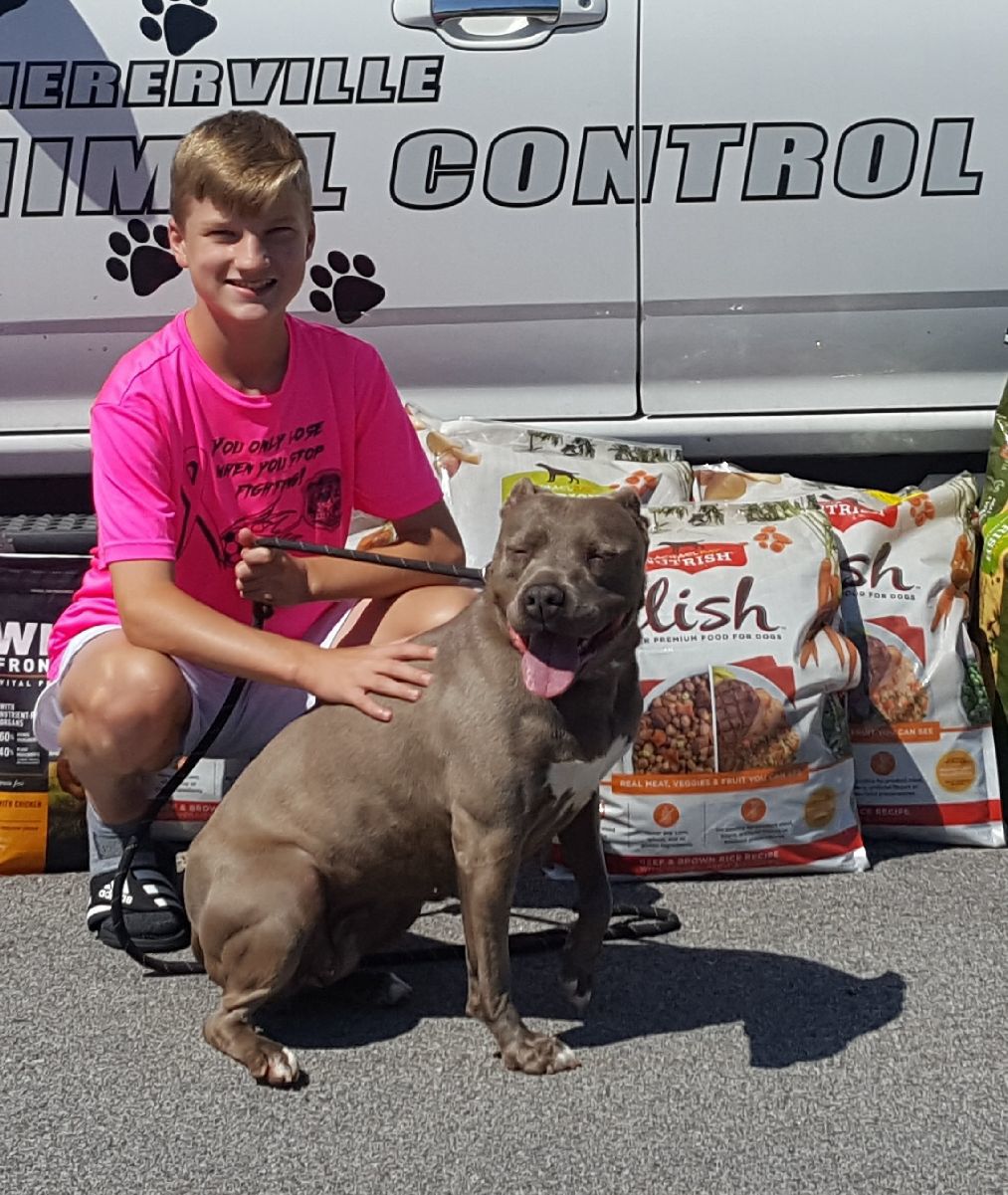 Craig Rusin poses with Bittie, a dog at the Schererville Animal Shelter, while dropping off donated food as part of his aniMEALS2020 campaign. 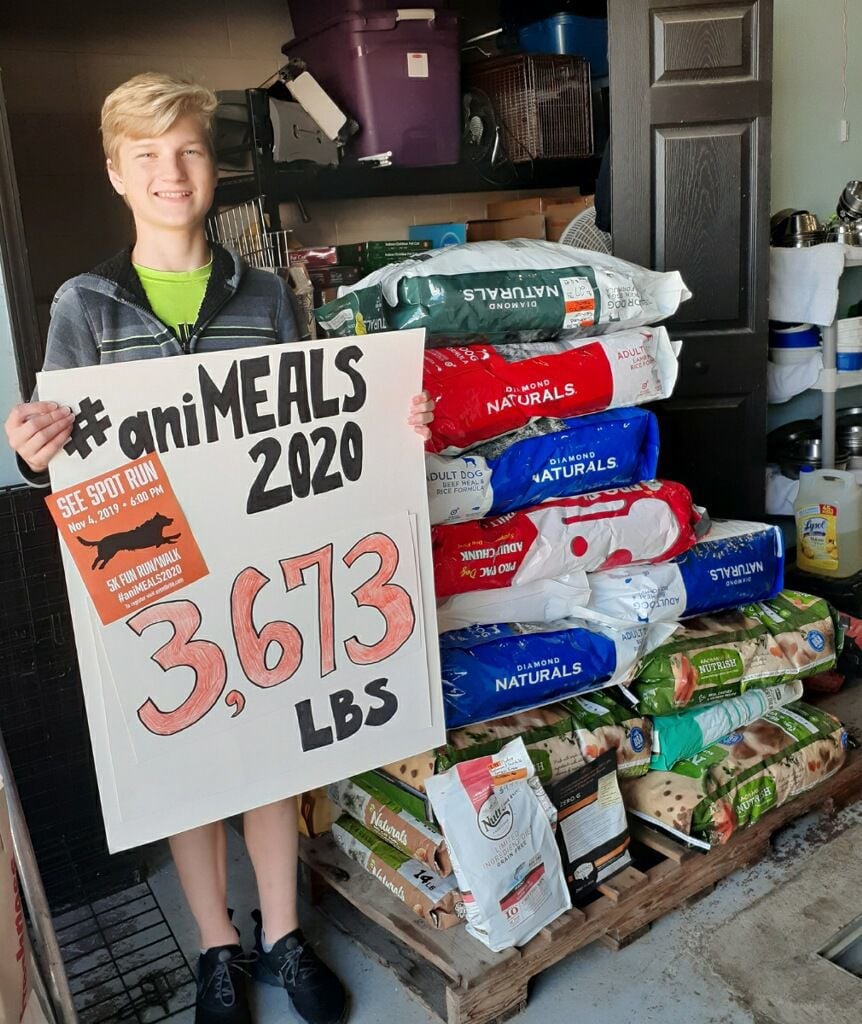 Craig Rusin is an eighth-grader at St. Mike's and has raised 3,983.5 pounds of dog food for the Schererville Animal Shelter as part of his aniMEALS2020 campaign. 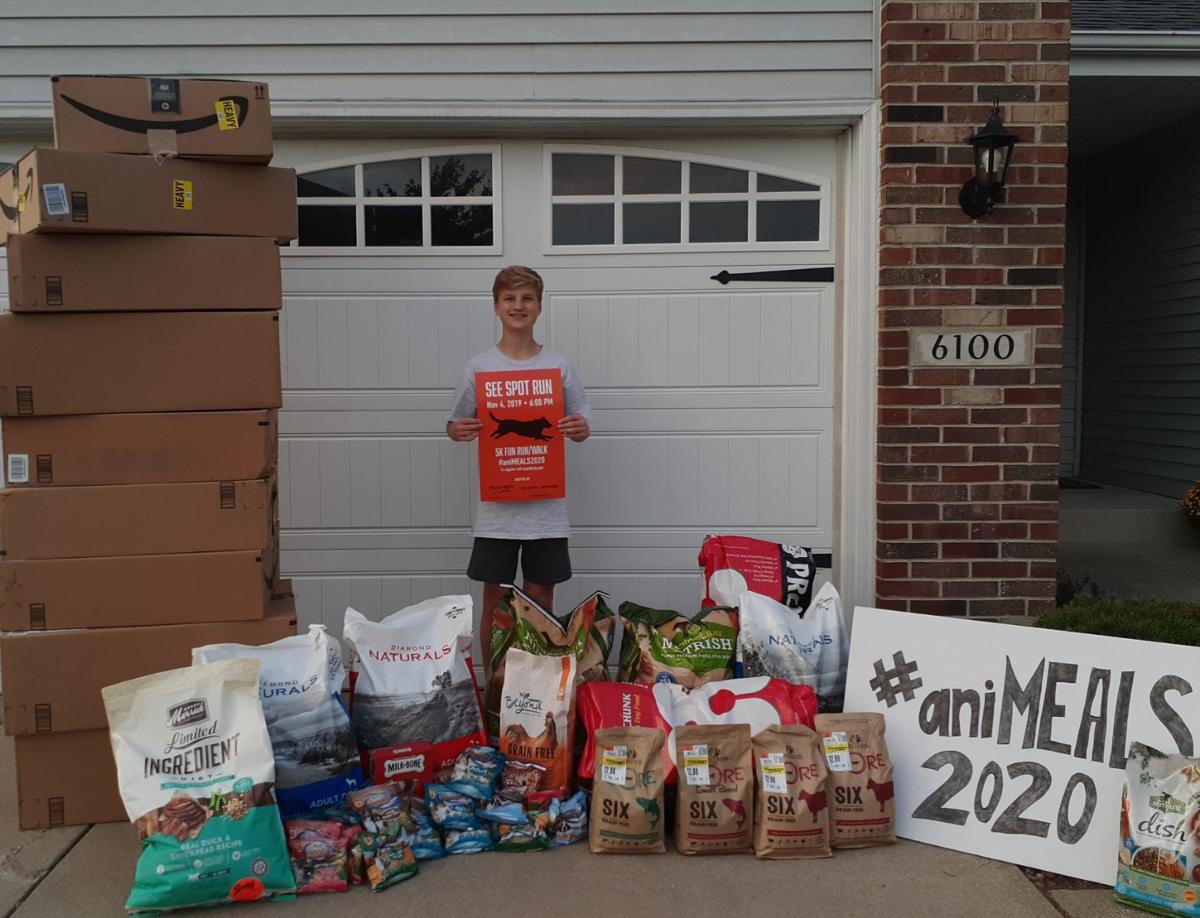 Craig Rusin has collected and donated 3,983.5 pounds of dog food for area animal shelters as part of his aniMEALS2020 campaign. 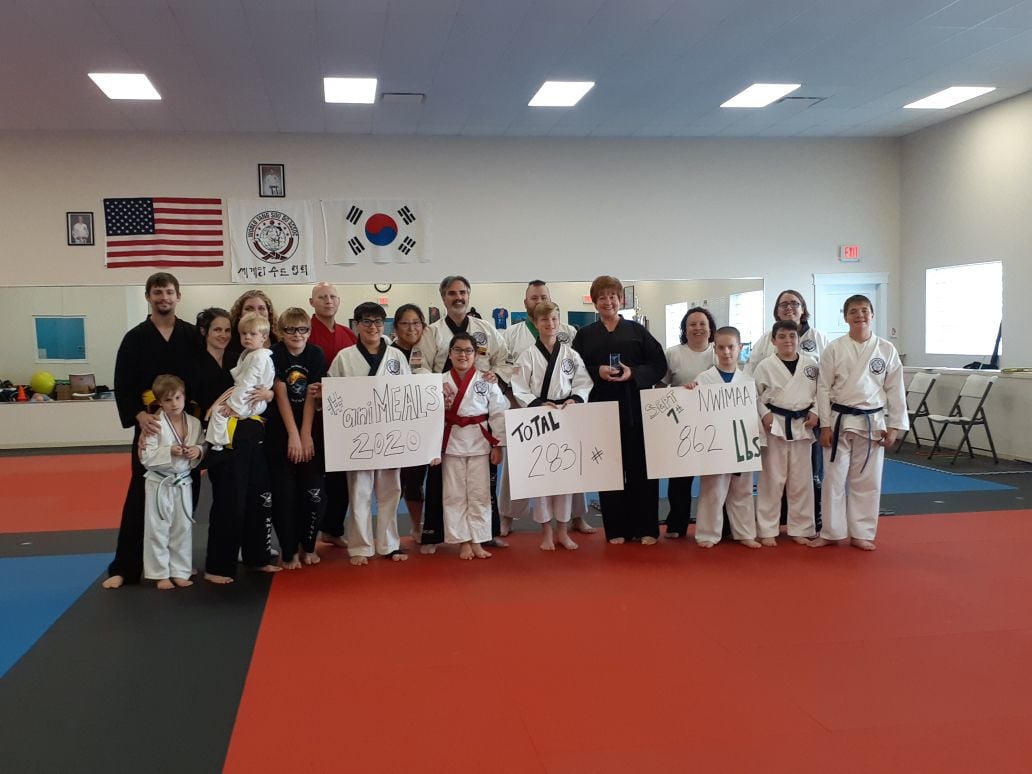 SCHERERVILLE — Craig Rusin is an accomplished eighth-grader, having already earned his black belt in Tang Soo Do, become an accomplished soccer player and won ribbons for his artwork at the Lake County Fair.

But he wants to be remembered for impacting others’ lives.

Rusin, 14, began his charitable spirit five years ago and has ramped it up in eighth grade. He set out to collect 2,020 pounds of dog food for local animal shelters by the time he graduates from St. Michael School next spring.

He’s already exceeded that goal, raising 3,983.5 pounds of food through Monday. He wants to hit 4,000 pounds by Thanksgiving and 5,000 pounds by year’s end. It’s all to benefit local animal shelters because his dog, Spot, was rescued several years ago.

“(I did this) because like all these dogs are rescues and he's a rescue,” Rusin said. “And you don't really know the story all the time and they need help.”

His campaign — aniMEALS2020 — had its marquee event on Monday. The See Spot Run 5K fun run and walk took place in Schererville, with the registration fee of $20 benefiting the Schererville Animal Shelter.

See Spot Run included 45 walkers and runners, and more were on hand for the accompanying raffle and bake sale. Rusin said he was pleasantly surprised with how many people showed up.

“It’s pretty cool because everyone just congratulates you all the time and says that they love what you’re doing,” Rusin said of Monday's event.

In exchange for the registration fee, each runner received a free raffle ticket for baskets, which included a pair of Bulls tickets and a Fleet Feet basket valued at $300. Fleet Feet helped put on the race. Additional raffle tickets were given out for each person who brought a 25-pound bag of food.

“We're collecting food donations to give needed food to the shelter and we're trying to help as much as we can,” Rusin said. “The money they could use to buy food or they could use it to buy equipment and toys and stuff for the dogs and fix up this place a little bit.”

“Like the first time I met him, you don't see that from a 14-year-old too much anymore,” she said. “His drive and determination is just amazing. They’ve become family now.”

Five years ago, Rusin was urged to “do good on Good Friday,” a program at the Northwest Indiana Martial Arts Academy that Master Adam Theros started. The program helped Rusin break his initial goal, symbolically with a board-breaking class and by raising 862 pounds of food in two hours.

Rusin has designed, created and planned his programs with the support of his family, and has had some help organizing and orchestrating things. His website, DoGoodBeMore.org was sparked by a desire to be more than a soccer player, black belt or artist.

“Grownups say, ‘Oh, what do you do for a living?’ … and we had a long talk about what you really want them to know you for and what do you want to be remembered for,” Patty Rusin, Craig’s mom, said. “The things that you do, outside of (personal fulfillment) stuff … (when) you do more for others that's more of a legacy. So on his website he's got ‘Do good, be more.’ What are you doing that's going to make the world a better place?”

Rusin’s project has received donations from as far as Arizona and Florida. Rusin has even had an Illinois family reach out wanting to be a second branch in their community.

He plans to carry on with his project at least through his high school years, when he plans to continue playing soccer at Lake Central. But he wants to combine his charitable spirits with his love for soccer.

Rusin has even taken his charitable goodness global and started Kicks for Kids as a seventh-grader. He collected new or gently used soccer cleats, balls, jerseys, shorts, socks and shin guards that were delivered to Haiti after a call for help from Notre Dame de la Merci.

“The priest at the parish said he wanted school supplies from us," Rusin said. "And then, since sports in my opinion are more fun than school, we decided to collect lightly used soccer equipment and give that to them."

He wants to advance his mission of spreading soccer to less unfortunate kids globally, and is looking for help from Dick’s Sporting Goods and other sporting goods stores. The logistics of transporting the goods have been an issue and he’s willing to exchange an idea for an improvement on Dick’s GameChanger and Blue Sombrero applications for their help.

From his own playing experiences, Rusin believes adding a few questions for each player and coach to answer would provide extra insight on what each kid thinks about himself and his teammates. It would allow the coach to adjust his practice and game plans and build kids up, too.

“They already have the platform, so you don't have to reinvent the wheel, they could do this as an add-on," Patty Rusin said. "And we'd like to trade that idea for them to sponsor you know, the donations or even if they would be willing to sponsor like a team of the kids.

“Maybe every summer you know, a group of six of the soccer players, all different ages ... deliver the stuff with a coach to whatever school or town or village and, and then ... that'd be a good learning experience and we get all these other kids ... involved other soccer players.”

Since beginning his campaign, Rusin, the youngest of five boys, has gained a new perspective on life.

For more information on Rusin and his charities, upcoming events and donation information, visit dogoodbemore.org.

Craig Rusin sits with his dog, Spot, who is the inspiration for Rusin's aniMEALS2020 campaign to receive 2,020 pounds of dog food to donate to the Schererville Animal Shelter. He has raised 3,983.5 pounds and hopes to reach 5,000 pounds by year's end.

Craig Rusin poses with Bittie, a dog at the Schererville Animal Shelter, while dropping off donated food as part of his aniMEALS2020 campaign.

Craig Rusin is an eighth-grader at St. Mike's and has raised 3,983.5 pounds of dog food for the Schererville Animal Shelter as part of his aniMEALS2020 campaign.

Craig Rusin has collected and donated 3,983.5 pounds of dog food for area animal shelters as part of his aniMEALS2020 campaign.